Greetings all, new here and need some help. I just ordered and installed a Yakima rack to haul a canoe. I got the bow/stern tie downs and today tried to attach them to my 2016 Ford Explorer. No worries on the rear, the trailer safety chain holes should work great. But up front is a different story. There’s nothing but plastic across the front of the Explorer, and there is a plastic dam under the front end that leaves out attaching to something steel underneath. The only thing I can think of is grinding a hole in the plastic underneath or possibly going into the engine compartment. Any thoughts? I’m guessing this isn’t the only new vehicle with this issue.

See if you can back off a bolt holding the car side panel to the frame surrounding the hood. Fabricate a webbing loop long enough to stick beyond the hood gap and side panel. In the webbing loop burn a hole wide enough to allow the bolt to pass through and reinstall the bolt.

Use the correct bolt tightener anti vibration fluid when reinstalling the bolt.

Your tie off is now high.

I know one paddler who drills holes through his truck hood and installs stainless steel eye bolts. Seal the revealed metal and rubber washers provides a weather proof seal. He can get to his engine with boats still tied on.

I use them for the front tie-down on my 2016 Honda FIt. No issues and not a mark on the paint job.

I’ve been using Thule Hood Loop Straps secured to front suspension bolts under the hood of my Santa Fe for the last four years. They have worked fine with no damage to the paintwork or hood. Of course, when you’re not using them you can simply tuck them away under the hood. You could always make some yourself but I didn’t think $20 for a pair of them was too exorbitant…

On the rear deck of my car there are two sturdy metal loops that fold down flat. I just tied two loops of braided rope into them that can be pulled out when needed. Again, in 4 years I’ve had no problems… 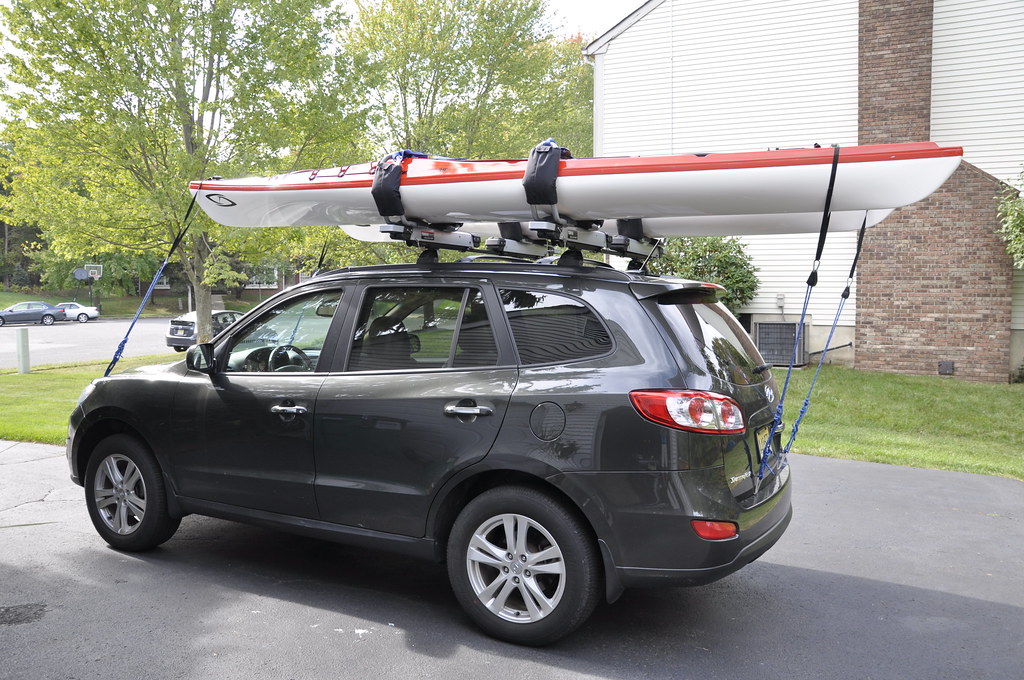 I recently bought a Kia Sorento, and like most vehicles, it doesn’t have tow loops or hooks under the front, and the frame is all covered with fiber or plastic sheets. To provide an attachment point for my kayak bow ropes, I replaced two of the 6mm bolts which hold the fiber or plastic sheets in place with longer stainless bolts, and used the bolts to attach a heavy D-rings with a metal strap. 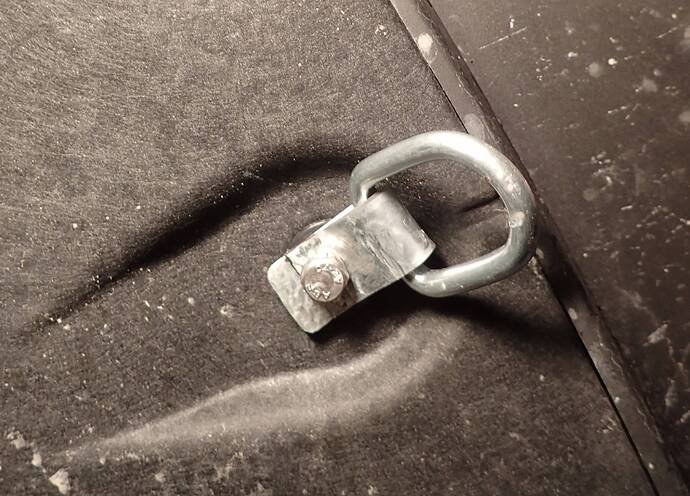 Thanks for the comments, hadn’t thought about the loop under the hood. So the hood closes ok with the strap in it? That should work for me. I just checked with Yakima and they make the same loops. This is step one, getting set to haul it, then I’ve got to find a canoe for sale… I’m coming off 25-plus years with a 19-foot square stern Grumman from 1949. It’s been a faithful companion but I moved two years ago and had nowhere to go with her so I sold it, little knowing I would move to a house on a lake. Now thinking along the lines of a Mad River Explorer, like that you can change seats and paddle backwards for solo trips. Edit: Also will have to deal with the Explorer’s unfortunately placed antenna. No doubt I will tear it off after a few on-offs with the canoe and won’t have to worry about it anymore!

i would just put a small soft rag on the side the loop pulls so your paint don’t wear off on the hood edge.

@BigJimMac said:
Thanks for the comments, hadn’t thought about the loop under the hood. So the hood closes ok with the strap in it?

Mine has been fine for 4 years with no damage to the hood and absolutely no wear on the paint. The hood, and in my case the rear hatch, both close perfectly.

I use the boats at least three times a week with a few thousand-mile trips at freeway speeds every year.

I would look for a solid mounting point. In my case I found a nut holding a bolt that attaches part of the front suspension tower to the car’s steel frame. I just removed the nut, slipped the strap over the bolt and replaced the nut.

My hood loop isn’t mounted to the frame but is firmly held in place by the hood. Not even a hint of paint wear. I have a tow bolt under the rear of the car, so use that to tie down the stern. Longest trip I took with the kayak on the roof was a bit over 600 miles (round trip) at 65-70 MPH. No issues; everything was nice and secure.

Good luck on your step 2. Lots of canoes for sale here - maybe something close to you?

Would it be inappropriate for me to brag about the big tow hooks I have on the front of my truck? Probably.

I’m unlikely to have added them if they weren’t already on the truck when I bought it. I keep the under-hood loop idea tucked away for my next vehicle that will, undoubtedly, not be as easy as my current setup.

“You can use this loop attachment system anywhere there is an exposed bolt head. Just remember to check for strength and that there will be no fraying or excessive wear. When not in use, they can be folded back down under the hood until needed again. Prolonged exposure to UV rays will eventually weaken them, as will small cuts and tears. Another concern is the constant whipping motion against your hood if exposed but not being used to secure a load. Even though its soft nylon, that constant whipping in one spot could blemish your paint job.”

Interesting, I may need these. Just checked under the Explorer hood and there’s not much in the way of bolts there. Geez, don’t they have any designers who engage in outdoor pursuits? Just like the location of the antenna, surely someone spoke up and said “won’t that get in the way of a canoe?” I’ve got a set of Yakima straps ordered, $10 through Walmart.com of all places, no tax or shipping. Of course they won’t be in until next week and I’m going to look at a canoe this weekend, which means I’ll probably make a set to get it home! Such is life.

Are you sure that your Ford does not come with a detachable towing eye?

Here in Europe, most cars have one of those, and they are actually quite perfect for tying down a kayak since they protrude beyond all the plastic on the front.

Only problem is that there is only one of them, placed off-centre, and the tie down rope will be pretty diagonal for a kayak at the opposite side of the car.

I have had under the hood installed loops for years… It would be helpful if posters actually had experience with them.

UV degradation doesn’t happen fast in the forest. And they do not whip if they are short enough.

You don’t need to replace bolts… Just install one for the loops of course where you won’t drill wiring.

I think that Japanese made cars have tow hooks as they are transported by ship… and tie downs are necessary… For those made domestically in North America maybe not. Ours do not…Can’t speak to others…

And that infernal gravel shield that we always rip off…

@Allan Olesen said:
Are you sure that your Ford does not come with a detachable towing eye?

Here in Europe, most cars have one of those, and they are actually quite perfect for tying down a kayak since they protrude beyond all the plastic on the front.

Only problem is that there is only one of them, placed off-centre, and the tie down rope will be pretty diagonal for a kayak at the opposite side of the car.

My Honda has the towing eye that can be threaded in the front bumper. I find a removable hood loop is much quicker and just as secure as the towing eye needs to be retrieved from the spare tire storage area, then the cover on the bumper popped off (and stashed in a safe place) and the towing eye attached. Then the process has to be reversed since the towing eye extends about two inches from the bumper. For me, that’s too much of a hazard to leave it in place.

With a hood loop, I just pop open the hood, position the loop, close the hood and I’m good to load. No UV degradation since it’s as easily removed as to install.

@Rookie said:
With a hood loop, I just pop open the hood, position the loop, close the hood and I’m good to load. No UV degradation since it’s as easily removed as to install.
OK. Maybe I misunderstood the OP’s last post. I thought he had ruled out the option of a hood loop because of a lack of bolts. Are you using a hood loop which does not require bolts?

Anyway, I agree that using the towing eye is cumbersome. I have used it on my Mercedes once. Fortunately, I can position the roof crossbars with a distance of 1.5 meter so I don’t really need to tie down the ends.

Yes, no bolts. They come in a pair, but as I only need one I just alternate them. Neither shows any sign of wear. 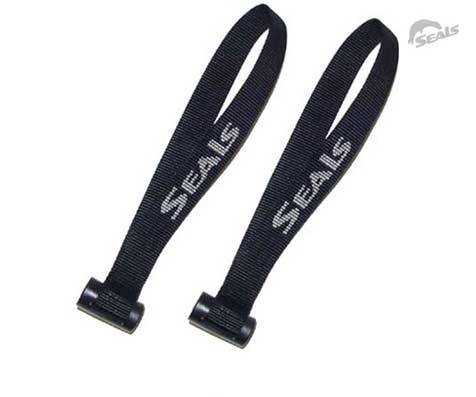 Even simpler than melting holes in webbing. I backed out two bolts tied 550 cord around them(eskimo knot) cinched the bolts back up. When I’m not using the tiedowns the cord is wrapped around rubber hood bumpers. Whatever you use if it stays under the hood when not in use make sure it can’t reach the fan or belts.