Camping Kayak That Can Be Used on Class 3-4 Rapids

Best kayaks for river camping with some whitewater?

I recently went on a trip where we kayaked for 20 miles on a calm creek and spent the night on the bank camping. We thought it would be fun to do something similar out west in a forested area. After searching for such a location, I realized that there were a couple of problems. First, most places that fit the description have at least class 3 with the occasional class 4 rapids, and I don’t have the skill to tackle that yet. Second, there does not seem to be an ideal kayak for a 20-50 mile camping expedition that can handle the rapids and carry the gear we would want to take. As for obtaining the skills I need, my thought would be to go to a whitewater kayaking school, but I’m open to other suggestions as there are no such schools in Texas. Also, I am really not interested in playing in whitewater either, just passing thru it. As for the ideal boat, I am looking for something that can get thru the rapids as safely as possible, but will not be terrible to paddle on longer, slower stretches of river either. Any thoughts on boats I should look at?

I think you are looking for a Canoe

Maybe a canoe is the best option. I’m just not very fond of them because the canoes I have seen track poorly and are slow on flat water compared to my 11 foot recreational kayak. However, the canoes I have dealt with were inexpensive rentals. Are there any mid to higher end canoes that could rival a recreational kayak in tracking and speed on long flat stretches of water and still handle rapids?

There are but I’m not a canoist. Luckily there are canoe pros on here who will answer. Merry Christmas!

Might want to look at the Dagger Green Boat. It would probably fill the need.

There are differences between whitewater self supported trips and camping trips with some whitewater. The whitewater self support trips are focused on the water and shore comfort is a lower priority. People will often use creek boats for these. The Dagger Green boat noted could be a good option. For more of a focus on camping some of the 14’ - 15’ plastic sea kayaks could be OK but with greater length and slower reaction time a higher set of both water reading and paddling skills would be needed. The biggest skill needed is to know when it is time to talk a walk in the woods.

When it is time to take a walk in the woods (a portage) canoes shine. Easier to land, unload, load, and carry through the woods. They will also, in general, carry far more than a kayak. The learning curve for paddling a canoe, especially a solo canoe, seems to be steeper than for a Rec. kayak. My guess is that may have been a part of your experience.

Look around for a Prijon Yukon Expedition. They are 14-1/2 feet long, plenty of rocker, two hatches and a rudder. The plastic they are made of is tougher than other plastic kayaks. If you find one without a rudder you can still make it go straight with a little effort.

The age old conundrum.
Most kayakers and canoeists serious about running whitewater, have large rafts along to haul their gear. Gear haulers. Pig boats.

Then they can bring their little ww kayaks and short canoes with a lot of rocker. They run empty except for some flotation.

Most humans that try to paddle Class IV rapids with loaded kayaks are going to have some trouble.

I suggest that you take a couple of day trips in a raft with an outfitter and take a close look at Class II-IV rapids and decide if that is really what you want to do.

Hey Russ If you could let us know the locale where you plan to paddle then we might be able to give some better advice. Amount of current, wind conditions, type of whitewater, number of other paddlers all play into what is best decision.

There are two groups of whitewater kayaks you might be interested in: long boats (racing), and crossovers. Some manufacturers to look at are Dagger, Jackson, and Pyranha. If you go to their websites you can get some idea of what is out there. Whatever you choose, you’ll be packing light (backpacking) with this type of set up.

Lots of folks use inflatables for what you are looking to do. A raft and oar frame is common for this type of trip but expensive from NRS . IKs or ducks are also a popular option. Check out Soar inflatables as they have their own niche with an inflatable canoe. A big draw back with rafts and ducks is that they are slower on the flats.

Canoes can be a good option as well. I don’t like portaging in any boat and that includes canoes. In truly rough terrain (bushwacking) I give the edge to dragging a kayak. Canoes have the edge on established portage trails. It is easier to load a canoe but it is more difficult to plow through whitewater in a canoe.

Better start with the class II-III stuff and work your way up. Maybe pblanc can hook you up with some contact info on Texans who come annually to the week of rivers (in NC) that paddle whitewater. You need to get the ww dialed in a bit and be ready to live with the consequences if you lose or pin
a boat far from civilization.

To put some reality on this, learning to paddle Class III takes most people quite a while. It is a pretty big jump up from Class II, which is where most people learn. A whitewater class likely would be 2 days on the Class II, and you likely would need a half dozen or more days on the Class II water after that before trying Class III. To get good enough to take a loaded boat on Class III will take even more.

Class IV is a huge jump from Class III. You likely are looking at multiple seasons of Class III paddling before trying.

Those white water boaters that do overnight generally go the direction of packing real small, rather than bringing more gear. Options that do allow for more space would be the larger boats, like the Dagger Green Boat or Jackson Karma. But these larger boats do well in some types of water(like the Green River, which many were designed for) but not in others.

Pretty significant undertaking. But if paddling in trees is the main goal, seems like it should be quite possible to find an alternate route which would be appropriate for your current boats and skills.

ps - I disagree with the canoe suggestion. Canoes in Cass III take serious skills, so you’d have a similar skills build up required. Class IV is beyond the vast majority of people.

“Canoes in Class III take serious skills, so you’d have a similar skills build up required. Class IV is beyond the vast majority of people.”

I agree 100%. I spent many years as a fairly serious whitewater canoeist, and the jump from class III to IV is way bigger than most people think. I may be getting old and cynical, but I’m amazed at the number of people who say that they’re a Class III or Class IV boater after only a season or two. We see a lot of posts here that say they’re a beginner, but are looking for something to run III or IV. A full day of Class II and then a single Class III drop does not make you a Class III boater. “But my instructor/guide said it was a Class III/IV”. Of course they did. If they get you thinking they’ve made you that good a boater in just a couple of days they’re thinking it means a better tip and review for them.

I boated an open boat professionally/sponsored for several years and true Class IV still demanded serious focus. I’m very glad the OP recognizes that their skill set isn’t there yet. That’s a good sign. They mention making a western trip, which is where I am. One thing to remember is that a lot of the western rivers are in tighter canyons, meaning that some of the rapids, regardless of class, may not have a portage. That ups the ante considerably, and necessitates really doing your homework.

Thanks for that link Ben. Pretty impressive run. Now let’s see him do it loaded with camping gear!

Lol. Or see me try it in an empty boat - swim practice (if I was lucky)

One canoe ime…Whitesell Pirana. It’s quite voluminous. Bagged and electric pump. I’ve got one, my sons first OC1, as it was like paddling with training wheels. Converted to OC2, our 440 pound combined weight would be dryer in that than same run soloing our Encores. Not sure if there’s a modern day equivalent.
Cl 3 can be playable in spots open boating in my experience. Cl 4? Blade in the water at all times,hang on and pray lol.

I still have my Piranha as well. It was a little big for me to solo and have much fun. As a tandem, my partner and I were still under 300 pounds and it really came alive for us.

Yes, not a lot of playing for me at least in Class IV in an open boat!

Packing a creek boat for a 3-4 day camping trip is an art form where you have to consider weight, functionality, floatation, size, and trim. Paddling a creek boat on essentially flatwater is not pleasant. I would stick to a crossover boat, IK, or canoe. IMHO, most of the crossover kayaks are pushing their capabilities above class III (but others may differ about that).

Yeah, the Piranha will run CIV loaded in the right hands. Those hands are not mine though. CIII+ is about as good as I could do with my Rival (not the canoe’s fault though). 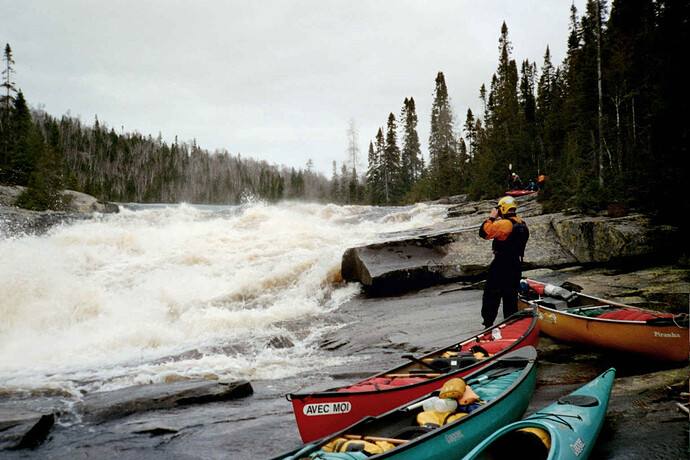