Can anyone help me ID this 25 year old Allagash Canoe?

I just purchased a ~25 year old canoe in decent shape that I’m hoping to fix up for some fun on the water this summer as well as a new project. I’ve been trying to research what canoe I just bought so that I can determine the hull material to make sure I am fixing it correctly.

The boat is around 16’ long (I have yet to take exact measurements) and I found a serial number pressed into the back right side of the hull near the gunwale.

My research makes me think SCSN stands for Stowe Canoe Serial Number and the last two indicate it was built in 96.

There is a large Allagash sticker on the side of the boat.

Any help would be greatly appreciated! 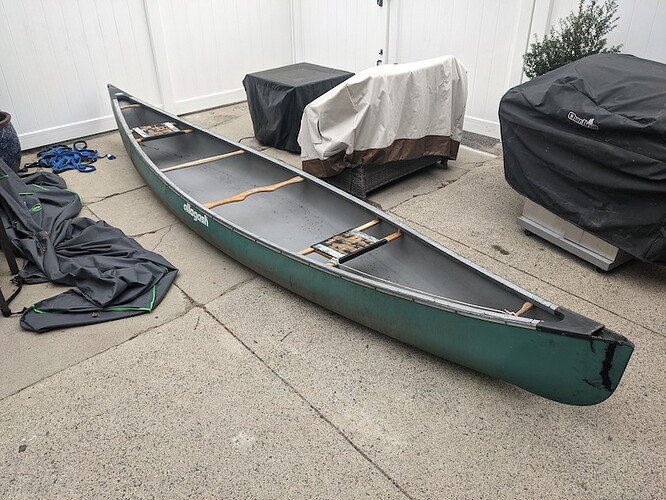 check out this old thread

This is my first post. I recently bought an older 17’ Royalex canoe for 60.00. The gunwales were rotted and the seats destroyed. I plan on replacing everything this week and should have a decent family canoe for around 200.00. The owner said he remembers the name Allagash on the side. The serial number plate has fallen off and there are no other identifiable marks on her. I am guessing Royalex as the hull looks like two skins sandwiching what looks like a cork kind of material. Any info on A…

Assuming that your hull identification number (HIN) is correct, the first three characters, SCS, are the manufacturer’s identification code (MIC). That MIC is currently assigned to Scott’s Custom Boats LLC, 737 Deep Creek, Payson, AZ. But it is possible that the company that made the boat was sold and the MIC transferred.

The last four characters of the HIN, K596 indicate that the hull was built and certified with the US Coast Guard in June 1995 for the 1996 model year. Boats were very commonly made the year prior to the one in which they were intended to be distributed to retailers.

The five characters in between, N6993 were the serial number assigned by the builder at the time of certification. Sometimes one or more of these characters indicated model. But the characters could be used by the manufacturer in any way they wished, so long as they designated a unique boat.

There have been a number of canoe companies that have produced models called “Allagash” over the years. Allagash may well indicate that model rather than the maker.