Can anyone identify my canoe model? 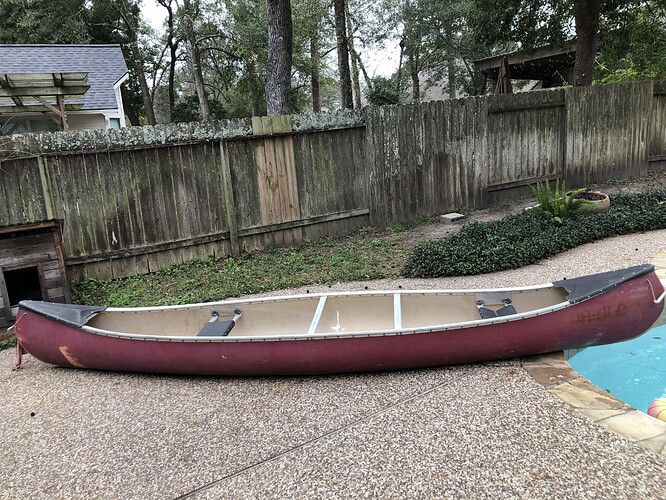 Hi first time long time, im patching up and fixing up my old boyscout canoe, want to get back on the water!

Id like to order replacement seats, keep it original if possible, but i have no clue what make or model this thing is. Anyone know? 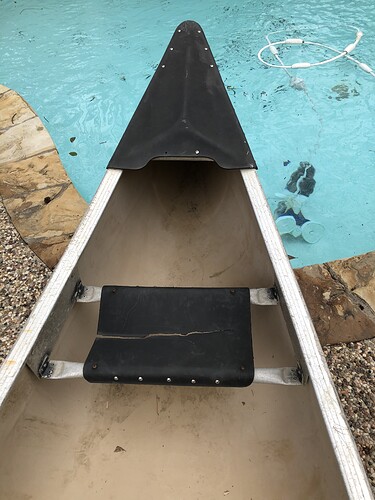 I seriously doubt you will find replacement seats for that, but I bet someone that does custom kydex work (think pistol holsters and knife sheaths) could make something, assuming the aluminum is serviceable.

You can order plastic sheets off Amazon or from other retailers. Use a heat gun to shape it, which shouldn’t be too hard in that application. Add a rivet gun and some rivets and I bet you could do that in a couple of hours.

thanks! and i could do that thats a good idea, probably my backup plan. If i had my choice though id rather just buy them, plus im really curious what kind of canoe this is. also the bow and stern black plastic parts are pretty beat up so wouldnt mind picking up those too if not too pricey. any model identifier experts out there?

i guess i would also be open to any ‘cool’ and/or comfortable seat replacement ideas if anyone has some links, something easily swappable.

holsters and knife sheaths) could m

the aluminum and welds appear very solid, thanks for the advice!

I think the boat is a Perception Chattooga, one of the few Royalex canoes molded by Peception which primarily made kayaks.

If you can find a 12 character hull identification number on the boat you can confirm that. Here is a picture of a Perception Chattooga: 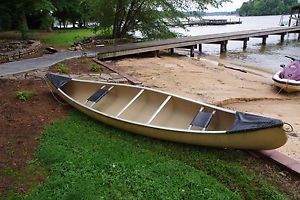 This thread might be of interest to you: Perception Chattooga Canoe? - #2 by pblanc

If it is a Perception Chattooga (and I am pretty sure it is) it is among the first Royalex tandem canoes ever made, one of the original “Warsaw Rockets”.

i think your right! Thanks for the link too, cool to know some history!

Regarding seats, edcanoes.com or essexindustries.org are two well known sources of quality replacement seats at reasonable prices. I tend to agree that you might want to just buy some plastic sheeting and rivet in new material. I’m not sure of the best source but Amazon does sell sheets of black plastic that get soft in hot water so you should be able to just heat it (like with boiling water in a bathtub), wrap it around the seat frames, let it harden and then drill rivet holes and rivet it on. It might take a little fiddling to get it trimmed and shaped just right.

im leaning towards the plastic sheet and heat gun, amazon costs $15 for 1/8 thick sheet plenty big(i got my micrometer out, thats the same width as the current seat).

If you looked at the “Coastal Canoeists” thread, some of the information in that thread is correct and some is not.

The “Warsaw Rocket” boats were not the same as the Blue Hole OCA which came later, although they were quite similar. Here is a bit of the history of Blue Hole, Perception, and the Warsaw Rockets.

In 1959 the US Rubber Company, which later became Uniroyal Corporation, obtained a patent for a new polymer multi-laminate of ABS and vinyl which they called Royalex. The same year Thompson Royal-Craft introduced a canoe made of expanded Royalite material which was essentially the same as US Rubber’s Royalex. Those boats were heavy and did not sell well, although John Berry bought one and tried it out on whitewater. US Rubber originally envisioned Royalex for use in the automotive industry but cheaper materials that were easier to manufacture captured that market.

In 1968 Uniroyal approached White Canoe Company in Maine and suggested the use of Royalex for canoe construction and was turned down. But Uniroyal persisted and molded a canoe hull out of Royalex that was thought to have been a copy of a 16’ tandem Old Town with fuller ends, and they started showing this boat at boat shows and also peddled it to rental outfitters. Ironically, Paul Rivers who had acquired White Canoe saw one at a show and began ordering unfinished hulls from Uniroyal, finishing the boats, and selling them.

Uniroyal decided to offer the unfinished molded hulls to anyone who would place a minimum order of 20 hulls and a number of canoe manufacturers bit including Blue Hole, Perception, Mad River, Seda, and Shenandoah. These hulls became known as “Warsaw Rockets”. Royalex was only ever produced at one factory in Warsaw, Indiana. The hulls sold by the manufacturers were absolutely identical but gunwales, deck plates, thwarts, seats, and thwart and seat placement varied.

Bob Lantz and Bill Griswald who later formed the Blue Hole Canoe Company started buying Warsaw Rocket hulls from Royalex in 1971 and they bought a die to extrude aluminum gunwales for these boats of a lower temper aluminum that allowed them to bend and conform to the hull more precisely. They made the inwales thinner to allow water to drain more easily and the outwales thicker to help shed water and designed their own deckplates which were structurally integral to the gunwales and had a solid grab handle incorporated. After trying the boats out on whitewater, they decided to form a company to outfit and sell the Warsaw Rocket boats and designed a logo for a decal. Blue Hole Canoe Company of Nashville, TN was born.

In early 1974 Blue Hole moved to Sunbright, TN. Lantz had always wanted to refine the Warsaw Rocket hull specifically for whitewater use but it took a year or more to design and build an oven to form the sheet over the mold. So the first 175 or so canoes sold by Blue Hole were the Warsaw Rocket design. But in 1975 Blue Hole brought out their first in-house hull design, the tandem OCA (open canoe model A) which was a bit deeper and a bit fuller in the ends than the Warsaw Rockets. It was also a little shorter, 15’ 9" instead of 16’.

In the early 1970s Bill Masters who formed Perception was making fiberglass kayaks under the name Fiberglass Technology. In 1976 he changed the name to Perception and he added to canoes to his line, both of which were Warsaw Rocket tandems. The Chattooga had aluminum gunwales and the Nantahala had wooden gunwales. Masters nearly duplicated Blue Hole’s gunwale design for the Chattooga which caused considerable friction between Blue Hole and Perception. Later Masters molded a solo Royalex canoe of his own design, the HD-1 (Hahn design-1) which had a bottom patterned after a Hahn C-1 hull with built up sides. But Masters knew that the real profits were in roto-molded polyethylene hulls which were much better suited to construction of kayaks than canoes and exited the canoe market to concentrate on plastic kayak design and construction.