Can I Add a Slot to Thule Square Bars?

I bought a new car and will have to upgrade my Thule rack to one with the newer Evo feet. Those feet engage with the newer Thule bars that have a slot in the bottom. I have several sets of older Thule square bars and was wondering if I can just cut a slot into those to work with the Evo clamps? Is there anything special about the newer bars (square bars, not aero) or the shape of the slot that would keep me from doing my modification? I don’t have easy access to look at a set of newer bars - otherwise, I’d just look myself

I would hesitate to do that. Would nullify any warranties and could weaken the bars.

Picture is worth a thousand words. Go to a good machinist they can cut them and let you know their opinion.

Go to a good machinist they can cut them and let you know their opinion.

They can tell you if they can cut the slot.

They cannot tell you if the bar afterward will have the strength to meet the requirements in Thule’s calculations.

I would not dare opening a closed profile without such calculations. An open “C” profile has considerable less stability than a closed “O” profile.

I have once had to repair the damage after someone dropping a 130 tons component several meter in a power plant because someone thought they could cut out some material at the unused ends of a carrying beam to meet a space requirement. However, even though those ends were not load carrying, they were adding to the stability of the beam by keeping the beam from folding. So the beam folded.

I don’t think I would do it. That cut would be on my mind constantly while going down the highway.

Bars aren’t cheap, but I would buy the right ones

Others have voiced the same concerns I’d have. On the solution side, what length bars? I do have some Thelu Aeroblade 48” bars $70 that came off my Wife’s vehicle when she changed cars.

I went thru this in August. Per a post I put up her on Pnet on acquiring a new Rav4 with the recessed rails. No good deed goes unpunished, it was the end of few years of hopping thru cars to get to a hybrid car with minimal monthly financial impact. To help the environment and all, though as a high mileage driver it helps me too.

I scored a kit of the last three pre-slotted bar podiums that I could find anywhere. But having gone thru it, at any point that these components bite the dust I am going to spend the money for the slotted rails and podiums new from Thule. Because after handling the stuff, I now see why Thule made this change.

Nothing is going to fly off the car very soon, but I agree with others above. Just get the new rails now and save yourself the trouble of accommodations that might not last.

. I have some Evo towers coming, so I can see how the clamp mechanism works. I found this image at a European Thule dealer that leads me to believe that Thule just cuts a slot in a non-slotted bar. So that may still be an option. I might also visit a local Thule dealer to look at some bars, but I really hate taking advantage of a local shop when I don’t plan to buy anything there. Like playing with electronics at Best Buy when I know I’ll buy online. 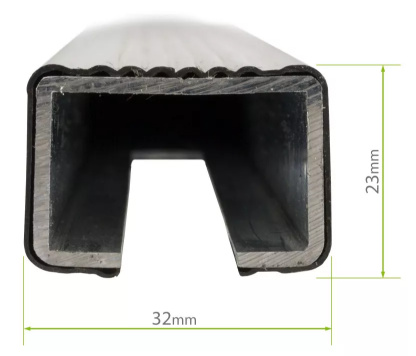 Celia - There’s no fit kit for the old style towers for the car I bought, a Hyundai Elantra GT (it’s actually a “designed for Europe” Hyundai I30 hatchback/station wagon) - so I’m stuck doing the switch to the new Evo towers now. I actually think the old system that you’re using would be safer since the non-slotted bar is completely trapped within the tower.

Disagree. What is holding the towers tight inside of the podium is a piece of plastic. Which has been a repeated failure point for another person I have been communicating with on pnet. After mounting the unit I can see why, that crucial plate should be metal . Once it cracks inside the podium is toast. Granted the initial reaction would be that it is suddenly loose and vibrating more on that side while still being attached. But over time that would likely take out the podium from the fit kit of the strap around the bar.

The metal to metal mount in the post-2017 podiums is likely to be more secure.

Whether any of this is more secure than my Cross Country mounts to raised rails that still show no major sign of wear is another question. I am not convinced. But raised rails are mostly gone on cars now, unless you get a Forester you can kiss that goodbye.

But raised rails are mostly gone on cars now, unless you get a Forester you can kiss that goodbye

Yea, style over substance. I’ve mostly driven Volvo and Audi wagons over the past 40 years, and they’ve all had raised rails. I could probably fit the Thule rack I used on my '74 145 Volvo wagon to the roof rack on my current Audi wagon!

I’ve migrated to the Thule aero bars, with the (top) slot mount for all the accessories. It’s a nice setup, but a bit expensive. I do expect to use this setup for the forseeable future, even if I switch vehicles (might have to change mounting feet, but everything else moves over)

The metal to metal mount in the post-2017 podiums is likely to be more secure.

Now you have me curious. I didn’t know about the plastic issue. I’ll have to look at my old 480 towers.

What is the size difference between old and new bars?

The “square” (rectangular) bars are unchanged: 32mm wide x 23 mm tall. For my use, that’s still what I prefer.

@Wolf
I think we are talking about the same thing, but to be sure the plastic piece I mean is on the pre-2017 460 podiums. It sits under the cross bar and tightens up against the cross bar in the process of setting up. There is a metal bar in the rear of I think most of the Fit Kits that secures the podium to the fit kit. But the crucial part of holding the bar secure inside the strap above that is a piece of plastic. It might be an excellent piece of plastic, but it is still plastic.

I personally think that some thick rubber, similar to what seems to hold like iron on the Cross Country mounts, would have been a much better idea. It would still tighten up like the plastic, but would not be at risk of cracking due to brittleness.

Gotta ding the Thule engineers on this one.

What about section thickness? A slotted rectangular section might (should) have thicker walls than a non-slotted section.

Let’s boil this down to what is at stake:

I don’t think Wolf is being irresponsible. Having just gone thru this kind of issue in early August, I can vouch for it being a surprise when you find out how much of the system you thought was fine has to be sacrificed when you go from raised to recessed rails with post-2017 Thule equipment.

In many cases, like me, could move the mounts from car to car thru a number of years because they generally fit a variety of raised rails.

I expect there will be more surprised people as they shift into newer cars, given the almost industry-wide change to recessed rails.

He is asking about it, which means there is the temptation to do something pennywise and poundfoolish. He has not done anything irresponsible, but the choice should be pretty obvious.

Wolf did ask about it. And took the advice of others a few posts higher up.