Can you attach bow/stern line to those "soft" stretching handles?

Got myself a new to me Delta 15.5 GT and I wasn’t sure if it’s ok to attach bow and stern lines to those handle lines that are like “soft” where the bungee stretches when you pull up on it. Sorry if I’m not using the correct term but I don’t know how else to explain it.

Now that I’m home I’m wondering if that’s ok? If yes, what should I do, snug it until I take out all the slack of the bungee or it doesn’t matter or?

But yeah if not, there isn’t any other places to attach these.

Not familiar with the specific Delta setup, but mist have a bungee to hold in place, but when the bungee stretches, it will at some point come to a hard connection (bungee no longer supporting the weight). If yours is like that, attaching bow/stern line to that should be fine. You woudn’t want the bungee being the only support for when you would need a bow or stern line.

This is in general. Might be good to know how you would use the bow/stern lines? For tying to the roof when transporting? In this case, you could t=attach to the deck lines on the boat.

That would work if it’s one of those setups where the bungee creates slack in a solid line, and then the bungee only stetches until the slack in the solid line is taken up. If it’s like what they show online with the handle attached to a screwed in attachment, you can skip the handle part, thread your bow line through the screwed on attachment, wrap it around the end of the bow, and thread it through the screwed on attachment again, and then down to your car. Alternatively, you can wrap it around underneath one side of your deck line at the very front, wrap it all the way around and under that same one side of your deck line again, and then down to your car. Either of these options will be secure, and won’t leave you with permanently stretched bungies attached to your handle so quickly.

Congratulations on the new kayak!

If I am seeing the picture right, this boat has perimeter lines that are rope, not bungies. Run bow and stern lines around those.

You can attach the bow line to the static (non stretchy) perimeter line behind (aft of) the bungee. The bow line doesn’t need to be exactly at the bow. You can make an easy attachment point by using a short webbing or rope loop that goes on the perimeter line using a cow hitch. I was trying to find a photo online to illustrate as in this case a picture is worth a thousand words, but no luck.

Ahhh ok thanks everyone. Yeah good point about the perimeter line I will use that instead. I didn’t like stretching out my handle, it seems like over time this will permanently keep the handle slack (the bow handle is a little bit like that already it seems)

Anyhow, here’s a bonus pic of it after cleaning the top side. 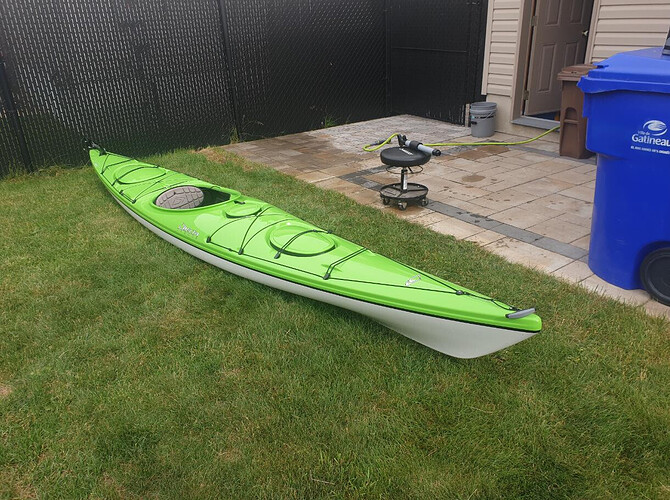 Oh actually, the primeter lines are attached to a bungee near the cockpit.

Still, better than stretching out the handles I guess.

Isn’t there a fitting holding the perimeter line to a fixed location at least on the bow? I thought I saw that.

The point of a bow and stern line is to stop the boat from coming loose if the main straps over the boat go. I do not think it is a good idea for that to be stretchy, imagine how well that would work at highway speeds.

You might be able to work something around the rudder mount in the stern.

See now I read that the purpose of bow and stern lines were mainly to prevent the wind from pulliing up or down on it. They also more or less served as backup lines, but wasn’t really the primary reason?

Yes there is, but the line is still “spring loaded” because it goes to a bunge around the cockpit.

Here’s some pics of the front. That perimeter line then knots into a bungee cord. 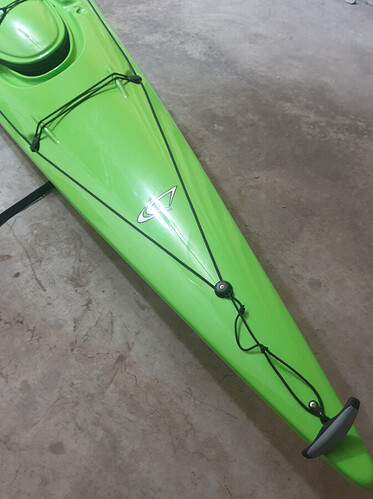 I’ve never seen the point of that toggle setup and it make me nervous to pick up a boat using them. Is it possible to thread a loop of line through the front fitting where the toggle bungee goes through? You could then attach the bow and stern lines to those.

I’m thinking of buying some thinner cord that I can make a loop around the screwed in eyelets (where the handle cord goes through) then put my strap through that cord loop. It’s a physical thing with no stretching.

I’m just not sure what kind of cord I need to buy for it to be safe/solid? I think doing it this way is the best way for proper solidness. 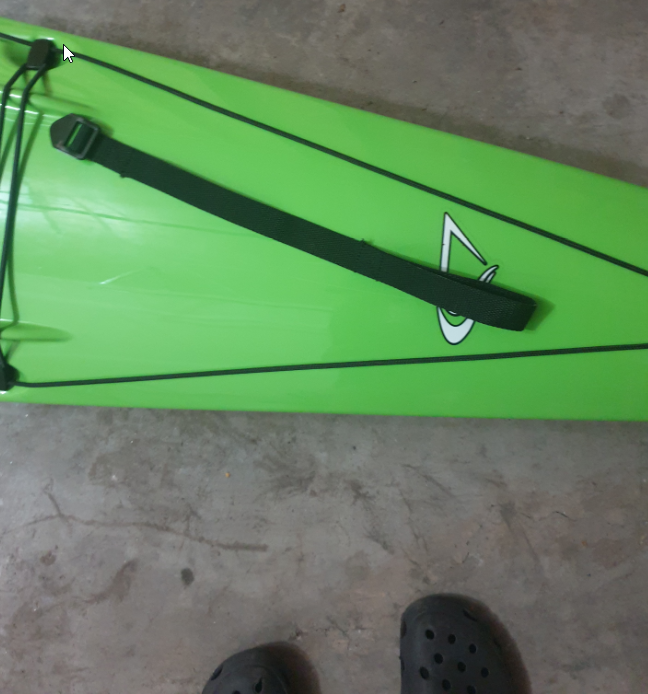 Haha you’ve just had my same idea as I was typing it below!

I think this is the route I will go, get cord looped through those handle fittings there.

Is there a special type of cord I need to buy or what is the common name? I know this sounds dumb but english isn’t my first language and it helps to know the good terms and all.

Marine grade 3/16” black polyester rope is a popular choice for kayak deck lines and will work well for this purpose.

OK, I am not understanding a couple of things but…

The purpose of the bow and stern lines is to back up the regular straps and rack. There are no rules about what way the wind is supposed to blow. But sideways is definitely a direction that is in the mix.

My bow lines are ropes, plain old rope that I got from a supply store, I double them over the perimeter line then do a trucker’s hitch to attach them to loops from under my hood. The only time in my life I ever used the fancy hooky things was once, the stuff that came with the first Yakima rack, and after it came off on the way home he first time I got rope and permanently stored the fancy idea.

The perimeter lines HAVE TO not stretch all over the place in order to function in an on-water rescue. And static line is just that - it stays put rather than stretching. So whatever it is knotted into, as long as it is held around that deck fitting it ain’t going to stretch out like a bungie.

Again, I am having a harder time telling what is going on in the stern. But something similar has to be true.

About the perimeter lines okay yeah. I guess the knot IS the solid point? Like I get what you mean, the bungee stretches but the knot physically provided a stopper. So that’s good to go then?

Here is a pic of the perimeter line stretched, see how the knot acts as a stopper? Just want to make sure here. So good to use that as bown/stern? 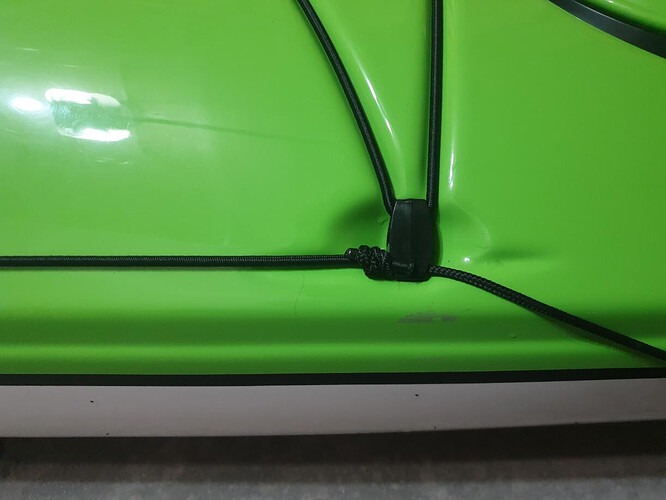 The perimeter lines are something you hold onto when you are in the water to keep hold of your boat. They should have just enough slack that you can get your fingers under them. They should not stretch or be connected to anything that stretches, like bungee cord. As the name suggests, they go around the perimeter of the boat.

Bungee cords can look similar, but are elastic and used for holding down things like a spare paddle, water bottle, a map case, paddle float, a small gear bag, etc. They are typically just in front and behind the cockpit. There can be a single on at the ends of some boats to hold down a spare paddle.

Omg okay, I think I just realised, my yak just doesn’t have perimeter lines, it isn’t advertised on the product page… I only spotted something on store description saying reflective lines. I thought it would for sure considering it’s in their higher end and longer models compared to the perception carolina. But I mean, the lines passed the X bungee, are definitely not bugee, they feel like rope, like perimeter line.

Great, I was getting a yak based on doing self recues alone. This is a bummer. I guess there’s still a technique to doing it?

More expensive perimeter lines often have reflective strands interwoven with the non-stretch polyester line. If your boat was outfitted with bungee al the way around, it is an assembly error. Take it back to the dealer and have them restring it. If that is not possible, have them send you the proper perimeter line and do it yourself. It’s not hard.

You can add static perimeter lines to any boat (5 mm perlon kermantle cord, which you can get by the yard at stores that sell rock climbing gear, like EMS and REI). If you don’t have fittings to which to attach them you can get stainless steel or heavy plastic pad eyes and drill holes to mount them, using rubber washers or Aquaseal to make the penetrations water tight.

I’ve used retired rock climbing webbing loops (soft 1" tubular nylon about 3’ or 4 ’ long either tied with a water knot or overlapped and stitched on the sewing machine) to loop and snug around the stern and bow of kayaks that lacked a sturdy attachment point. I tied the safety lines to the snugged loop.

It’s not bungee all around, it’s just the kayak doesn’t have a dedicated perimeter second line set.

Look here’s a pic of what I mean, this is the stern (rear) side on the deck behind the cockpit. See how the from the left, the “perimeter” line ends and connects/knots to the bungee of the rest. 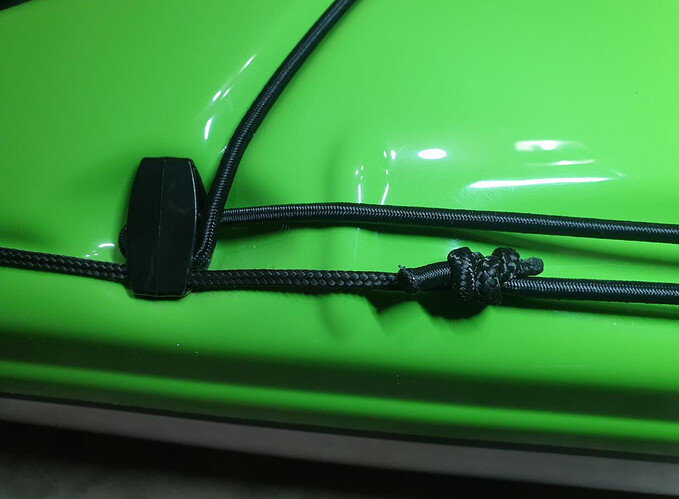