For those of you with kayaks with 10 inch round hatches (the NDK boats come to mind) : What are you using as a cart that can fit into one of the hatches?

Maybe there isn’t such a thing, but I thought I’d ask since I cannot seem to find one.

The C-tug with the regular plastic, non-inflatable wheels won’t fit because the wheels are > 10 inches. Sand wheels are even bigger.

It’s a “nice to have not need to have item” but there are a couple of local routes with a portage and it would be nice to pull something out, assemble it, roll away rather than carrying the boat. Not interested in strapping stuff to the deck.

Suspenz makes a cart with 8" wheels. They also sell the wheels separately.

I have a Malone Cart with 10" wheels but picked up a set of 8" wheels so that they would fit in my hatches. If you go that route be aware that the hub on the Suspenz wheel is a teensy bit smaller in diameter than the Malone but the difference was so small that it took maybe 5 minutes to sand the hub to the correct ID.

Amazon has a Velocity brand cart that appears to be a clone of the C-Tug. It comes with 9 3/4 inch diameter wheels. I don’t know if that’s small enough for your hatch.

I have the velocity cart and it looks decent to me. I’m guessing that it’s identical to the C-Tug, perhaps made by the same source, but just with different wheels. Note that I’m the reviewer identified as “W” on the Amazon page.

Ok missed that product completely. But will the basic cart/frame fit in a 10 inch hatch? The video shows it going into a large oval hatch.

Thanks for pointing to the Velocity product. My goodness that looks exactly like the C tug and at that price it might be worth a test.

I like the reviews that appreciate that it snaps together and snaps apart, and then criticizes that it’s made out of plastic! I suppose they’d like something that performs the same but made of titanium!

$50 for an Eckla that’ll fit a round hatch but I’ll have to check the tire diameter.

I wonder if the Velocity cart is licensed by Railblaza or a blatant and obvious theft of their C-Tug design. I didn’t see where the Velocity is made but the C-Tug is made in New Zealand.

The cart I used with my NDK kayaks was this one:

The Tuff Tire wheels come in either a pneumatic gray rubber or a solid black rubber version. They do not interchange on the same frame, so if you want both sets of wheels you need to buy two mini carts, each designed specifically for the appropriate wheels.

The cart worked GREAT for me. I used to portage the kayak one mile round trip to my from-home launch point–lots of use! In fact, I wore out the first frame before the wheels wore down. Bought another frame for it until the original wheels also wore out. Then I bought another entire cart. I loved that it was possible to buy separate components.

Highly recommended, especially as not many wheels fit in those NDK hatch openings.

They’ve been robbed I’m sure it.

Original C Tug had smaller wheels that were pneumatic. They would lose air after a few weeks. Then it was a pita to get air in the valve it would get pushed in the rim when you went to fill it.

I wonder if the Velocity cart is licensed by Railblaza or a blatant and obvious theft of their C-Tug design. I didn’t see where the Velocity is made but the C-Tug is made in New Zealand.

I compared details in photos of the C-Tug cart with the Velocity cart, and the plastic parts look identical. The reinforcing ribs all look the same and even the little clips that hold the wheels look identical. So, I think the parts of the frame come from the same molds, versus the Velocity cart being a reverse-engineered clone. That also fits with the easily replaced parts (wheels and strap) being entirely different. That still doesn’t answer whether it’s authorized by Railblaza.

The box that the Velocity cart comes in says “made in China”.

They rob the world of untold billions yearly.

IMO not enough blame ever goes to consumers who make purchases based solely on price and don’t care about any other considerations. Blame should also go to domestic companies who contract with copycat offshore mfrs. to sell this stuff to willing consumers who care only about price. And let’s not leave out Jeff Bezos who just isn’t rich enough.

Check out this one: 7" Kayak Cart KC7 — The Kayak Cart
The site shows one in an oval hatch, but the wheels are made to come off easily so it may fit a 10" round.

Oh boy I want to be an Amazon reviewer. Send it! 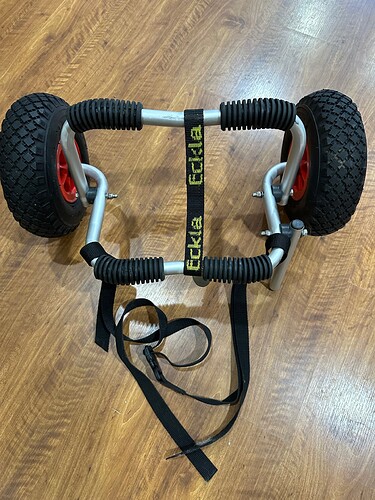 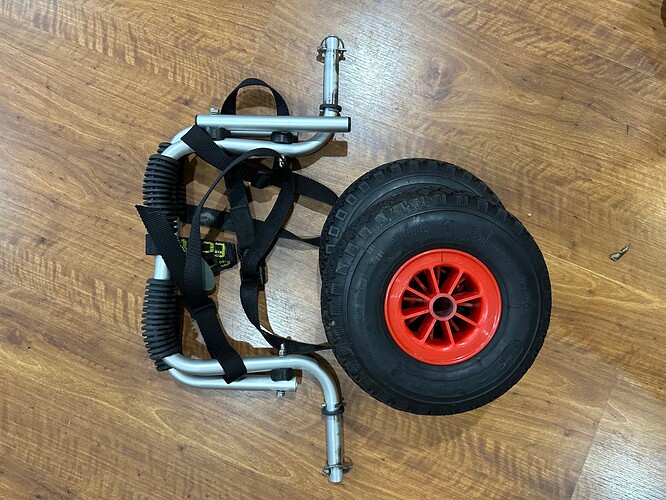 I just checked on a 10” diameter Cetus hatch. It fits.

Oh boy I want to be an Amazon reviewer. Send it!

The stuff isn’t really “free”. The reviewer owes income tax on the value of the item. And there’s a limited selection of items to choose from. This was the only time in 3+ months that a kayak cart showed up as one of the items to review.

I’ll pay the tax no problem and review stuff.

Apparently, you get invited to do this If they identify you as someone who writes “inciteful” reviews. I don’t buy or review that much on Amazon, but the few reviews I’ve left over the years must have met some favorable criterion.

I sure hope you meant “insightful”