That would get your attention.

Yeah, saw that come across the Inland Seas, Kayaking the Great Lakes group on Facebook. I understand that the kayak group was from Northern Waters Adventures.

Serendipity to have a drone flying when it happened.

Scary. Amazing that they captured it.

You think of glaciers calving reasonably often, so you give them space. But rock cliffs calving is much more rare, so you might not give as much space.

A real ‘draw’ to those cliffs for me was paddling right next to them, looking up and looking down - through the crystal clear water, and having the feeling of ‘flying’.
There is always that ‘drawback’ lingering above.

When passing
beneath ladders
to gaze aloft
ghosts rung up
and downs
fall in place
such matters
of gravity.

Maybe I should have confined my passages and thoughts to how trees take their leave?

A teen was killed in Rock slide on the going to the sun highway yesterday. “Watch for falling rock” signs are posted on that road. Maybe they need falling rock bouys?

The amazing thing is they got pictures of the thing that formed those clifts over years and years. Nature happens.

We’ve had deaths from rockfalls and landslides here in the Pittsburgh area over the years – the terrain around here is deeply cut by rivers and streams and the underlying strata is a lot of unconsolidated crap like “redbeds” and shale, interspersed with more durable sandstone and limestone that weathers out of the more friable layers and then chunks off and causes disastrous rock avalanches and mudslide slumps. Does not help that most of the area is underlain by abandoned subsurface coal mines so we get sinkholes too, that swallow cars and houses.

I barely missed getting squashed by one 30 years ago when a chunk of sandstone and shale the size of a boxcar broke off near the top of a looming 100 foot cliff along a highway roadcut above me just as I was driving to work at dawn. Fortunately there was nobody in the southbound lane directly below the cliff as that was completely buried and only small (basketball and smaller) sized debris landed on the northbound lane where I was. But by the time it got to that side I had panic-stopped and skidded far enough off the highway into the gulley to avoid being hit. Seeing that hillside collapsing ahead of me was quite a rush: cloud of dust and sparks from the chunks colliding. They had to close that highway for three months to cut back and step that cliff. It now has steel mesh pinned over it and a protected run out below. But I still hug the shoulder at that section when I drive northbound up there. And my hold breath and speed up when passing directly beneath it southbound.

We also have a lot of major roads here that literally go along the top edge of steep cliffs (like the trail atop the Pictured Rocks cliffs). One is the Boulevard of the Allies from downtown to the Oakland exit which is a couple of hundred feet above the Parkway East commuter highway and the Monongahela River below. When that Boulevard was built in 1923 it was, at the time, the most costly highway built in the US, per mile ($1.6 million) because it is literally carved into a cliff. I have two friends with acrophobia who refuse to drive along that part of it.

@willowleaf
Easy to believe that. While traveling to visit my dad’s family in PA, I recall seeing lots of warnings about rock slides and even sections along the highway which had wire netting installed. Was always happy to get past those sections.

In a car you have a better chance than in a kayak.

You see the retention mesh along I-40 in NC. Rocks still get past it , or under it.

And we have other natural phenomena here that affect our roadways. This was one of our major downtown commuter expressways a couple of rainy Springs ago. This was NOT photoshopped but is the adjacent Monongahela River about 10 feet above flood stage. There were cars on the parking wharf under the ramp to the left that floated off and down the river. 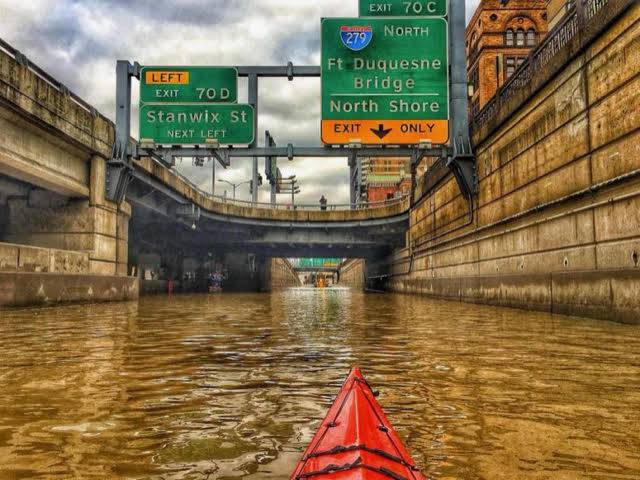 Calving cliffs are common on some Arctic rivers like the Yukon and Peel… But it is literally mini avalanches of sand.

Thankfully, drones are illegal in National Parks. Did they launch it from the water or land? I’m not sure if the park also includes any nearshore waters but in a “water park” like Picture Rocks they certainly should be banned from the nearshore waters as well. I hope they are fined severely if they violated the law.

Checked the rules and unmanned aircraft are prohibited within the NPS boundaries. That boundary stops at the water’s edge.
https://www.nps.gov/articles/unmanned-aircraft-in-the-national-parks.htm

@qajaqman said:
Thankfully, drones are illegal in National Parks. Did they launch it from the water or land? I’m not sure if the park also includes any nearshore waters but in a “water park” like Picture Rocks they certainly should be banned from the nearshore waters as well. I hope they are fined severely if they violated the law.

Film said “professional photographers” who could have a National Parks permit.

@qajaqman said:
Thankfully, drones are illegal in National Parks. Did they launch it from the water or land? I’m not sure if the park also includes any nearshore waters but in a “water park” like Picture Rocks they certainly should be banned from the nearshore waters as well. I hope they are fined severely if they violated the law.

Film said “professional photographers” who could have a National Parks permit.

Craig Blacklock is quite renowned. We had breakfast once in Apostle Islands. Jon Smithers I was not familiar with but his website looks aerial heavy photographer, i.e. drones. I doubt there was violation. I have not paddled Picture Rocks for a few years, but I did for 7-8 years straight. That shore line was constantly changing in a big way. 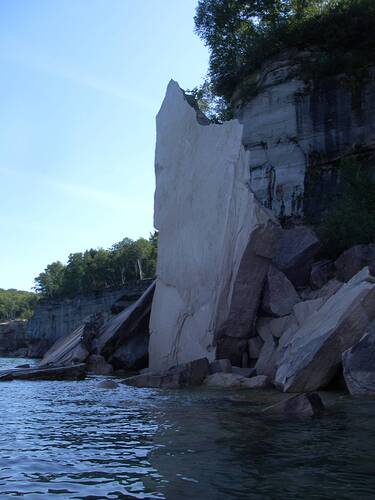 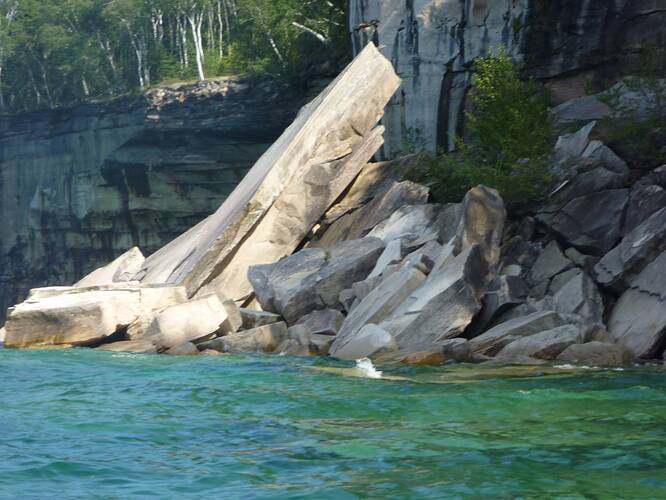 Rocks are tumbling from the sky.
Sometimes a drone in place these spy.
Qajaqman suspects illegal.
To drive in wedge get thee an eagle:

Not sure how to feel about these prop-o-sition four impositions. I mean, here I am, gawking at this uncanningly, right-place, right-time footage. And, the increasing use of drones for aerial mapping surveys is well along in proving itself of great value.

But, next? 1984 cometh 2024, with police/security drones bringing their omnipresent, eye-in-the-sky to former twists and bends of solitude (You know, like the shore coves and riparian shady bends we paddle upon for a spot of peace!) whenever the fear of crime and misdemeanors pervades. (And boy it do these days!)

Guess I’m just hoping to hold off a little longer in having to paddle under the drone of these mechanized mosquitoes, Besides, the annual expense of a falconer’s license as well as the 500 pounds of joey meat is quite prohibitive.

I’m quite familiar with Blacklock and know he is a professional photographer. That’s why I said he should be fined if he violated the law. Some photographers think they are above the law. Permits are required for commerical photography in national parks, but I don’t think there is a permit for breaking the law.

I can tell you that if I was paddling in a National Park and someone flew a drone overhead, I wouldn’t be amused at all.

There are some allowable exceptions but I doubt any of them apply in this case. The unfortunate truth may be that there’s nothing prohibiting him from flying over the water if he launched outside the park boundary.