I have been kayaking in a super stable (and slow) intex challenger K1 inflatable kayak for 3 years. Longest trip is 11 miles, and have paddled in slightly choppy water (with occasional white caps) a couple of times.

My biggest complaint is the kayak has too much drag and too slow, and been looking at faster alternatives.

Size of kayak is limited to 10 ft, so it could fit INSIDE of my Honda Odyssey minivan. (I don’t plan to install roof rack, etc)

I have paddled a Pelican Trailblazer 100 NXT (10ftx28inch, Twin-arched Multi Chine Hull) and handled it OK in calm water.

The faster boat I researched are Pelican Sprint 100 XR (10ftx28inch, which has deep chin hull. https://www.pelicansport.com/us_en/sprint-100xr.

Do you think it will be too big a step for me to take?

BTW, do you think upgrading to Bay ST (25 inch) is too big a step for a beginner to try? I want to avoid wet re-entry if possible.

I am impressed that you put 11 miles in a Intex K1. When I started, I did similar distances in an AdvancedFrame 10.5ft X 32in and I remember that it hurt. By the way, someone at Intex has a sense of humor to call it a K1 (like the kayaks used is speed races).

A 25in boat is still very stable, especially if it has hard chimes and flatish hull. That said, balance depends on the paddler and dedication to improve it.

Since you are considering Orus, there are also other options such as pakboats or more high end inflatables.

Wilderness Systems makes Pungos in 105 and Tarpons in that length. I suspect the Pungo would be a step up for you. It is a stable sit inside . The Tarpon is a sit on top.

I don’t want to buy a bulky 10ft hard shell and only have marginally improvement on speed. For this reason, I’m leaning towards sit-inside.

Looked at Pungo, it’s 2 inch wider than Pelican Sprint and weighing 6 lbs more. Not sure how the hull shape is compared with Pelican boats.
(Multi-chin, shallow-V or deep-V)

Or maybe, before attempting a deep-V hull boat, should I select a stable hard shell first to make the transition smoother?

What are the upgrading steps you guys took?

The comparison I can offer is that my 14’ Pungo can put a 14’ Skimmer to shame. I have kept up with sea kayaks in short sprints.
I started with a 12’ Perception Acadia rec boat. From there to a Sea Kayak, to a surf ski, and several SOT. The one that has stayed is the Pungo because of it’s weight, speed, and utility.
Forget about descriptions and paddle some more boats. If a hull is flat , it’s going nowhere fast.
Pelican now owns Confluence which owns Perception.
You are limiting yourself with that 10’ length.

To String’s point, there is much more to how a kayak behave than simply the lenght X width. Hull shape, stifiness, contact points… Pungos have a reputation for a good reason. Despite performance, you can find plenty used. Buy used at the right price, use it, sell it for the same price or more.

Take a look on Sea Eagle razor lite series, Pakboat puffin and quest, and, for lighter hard shells, Delta and Eddyline. I know Delta has some models on the 10ft range, not sure about Eddyline.

I understand your concern about finding something that fits inside an Odissey, but it sounds like you are enjoying paddling and you want to go faster. Maybe you should try a 14ft or longer, even surfskis. An Epic V5 rotomolded is about 1.5k and very stable. It’s a completely different experience than paddling a fat 10ft entry level boat (nothing wrong with them IMHO, but they do have limitations if you want to go faster and further).

You care about what is called the boat’s secondary stability, the likelihood that it will keep going thru to a capsize when it hits a certain angle sideways. The deeper the V the more it will rock back and forth. But that doesn’t matter if it stops at a certain point and gives you a moment to get back up.

I have a hard chined sea kayak that rocks like crazy. But once it hits that point it hangs, I have been in haystacks over my head with it and the only outcome was my lower back got a mini massage from letting the boat rock under me. A coach in a pretty solid loaner sea kayak capsized and had to be rescued in the same stuff that day.

I also have a very benign looking round hulled boat. Which is sweet as hell thru the water but will not stop at that point. She follows what she believes to be the orders of the paddler and keeps going so that you get to roll. Which happily is also something the boat is extremely easy at, enough that you may have to stop the roll at the top lest you windowshade.

The only impact of that deep V on the water - and there are a couple of manufacturers whose boats have tended to that design - is that it can be easier to impact forward speed with side to side wobble. If you are racing this is an issue. But for regular paddling the biggest issue you will likely find is in racking systems. It may not fit some of the car top racks as well as a rounder boat, for example J-bars.

PS on upgrading. We went from 12 ft transition boats with a pretty flat bottom to solid sea kayaks with decent performance. Forget the middle steps; just do it.

So your opinion is deep-V is not for beginners due to the crazy rock factor?

I don’t find that V-shaped hulls have crazy rock factors and I own two, both hard chined. To keep the boat centered when not moving, just keep your hips relaxed and weight even. Once you get familiar with the boat you won’t even notice it.

If you want to grow your skills, you need to go longer than a 10-foot kayak. I carried a 14-foot kayak in the back of my Toyota Matrix for a couple of summers. Thanks to plenty of padding and interior D-rings, it was secured well. But I did have to drive with the hatch open a few inches (secured with cam-straps).

If your Odyssey has raised roof rails then you might keep an eye on Craigslist since used (Thule or Yakima) roof racks and kayak saddles turn up fairly often at a fraction of new prices.

Keep in mind the narrower the boat the less weight carrying capacity.

The sense of “instability” that novices experience in a hard chined or other vee profile hull goes away quickly. Remember how you felt riding a regular bicycle as a kid after being used to a tricycle or smaller bike with training wheels? Or, if you learned to downhill ski or ice skate? Same thing – it’s just a question of getting comfortable with the motion and learning how to balance. As Celia explained above, a chined boat (one with flat facets in the cross section rather than being rounded) will “sit” on those facets as you lean the boat rather than continuing towards capsize.

A good exercise with a new boat that is narrower than you are used to is to take it out in warm shallow water and test the stability by rocking in it and leaning over side to side. Most kayaks will be much more forgiving than you might expect. And once you can relax in the boat, a narrower vee hulled kayak is much easier to propel and will give you greater speed and better handling.

There are other options than sticking with a short boat. You don’t mention your physical size, but for most adults, a 10’ boat has to be rather wide to provide enough displacement to support their weight. This naturally makes them slower. A longer boat enables it to be sleeker with the same or more volume.

Folding kayaks are easy to transport but would require assembly, like your inflatable. Smaller ones like the 12’ Pakboat Puffin Saco could fit into some vans since the boat is light enough to be angled over the front seat or it could be partially or fully dissembled to fit in a shorter van. As someone who has used higher end folding kayaks for 18 years I am a bit skeptical about the Oru models – they are clever designs but not something I would trust in rough or deep water. May be OK for the use you describe and would certainly solve your transport concerns.

Another option that could work for you would be a longer modular boat like the Point 65 Martini which is 17’ long but breaks down into 3 nesting pieces no longer than 64" that lock firmly together. I’ve seen these on the water and tested one at an outfitter – has all the features and performance of a regular hard shell touring kayak with great portability. This would be MUCH faster and easier to paddle than what you have been using.

Thanks for the insight information. Good to know that narrower or V shaped hulls can be get used to fairly quickly.

My next steps are to keep all options open and see what deals I can find.

Keep in mind the narrower the boat the less weight carrying capacity.

Beam is only one of several essential factors used to calculate the carrying capacity of a boat.

Here is another option, the Pakayak: Has anyone heard of Pakayak

I’ve now also seen it in action in November Lake Michigan surf & it does well. The owner carries it in a mid-sized sedan - maybe Buick Century size. 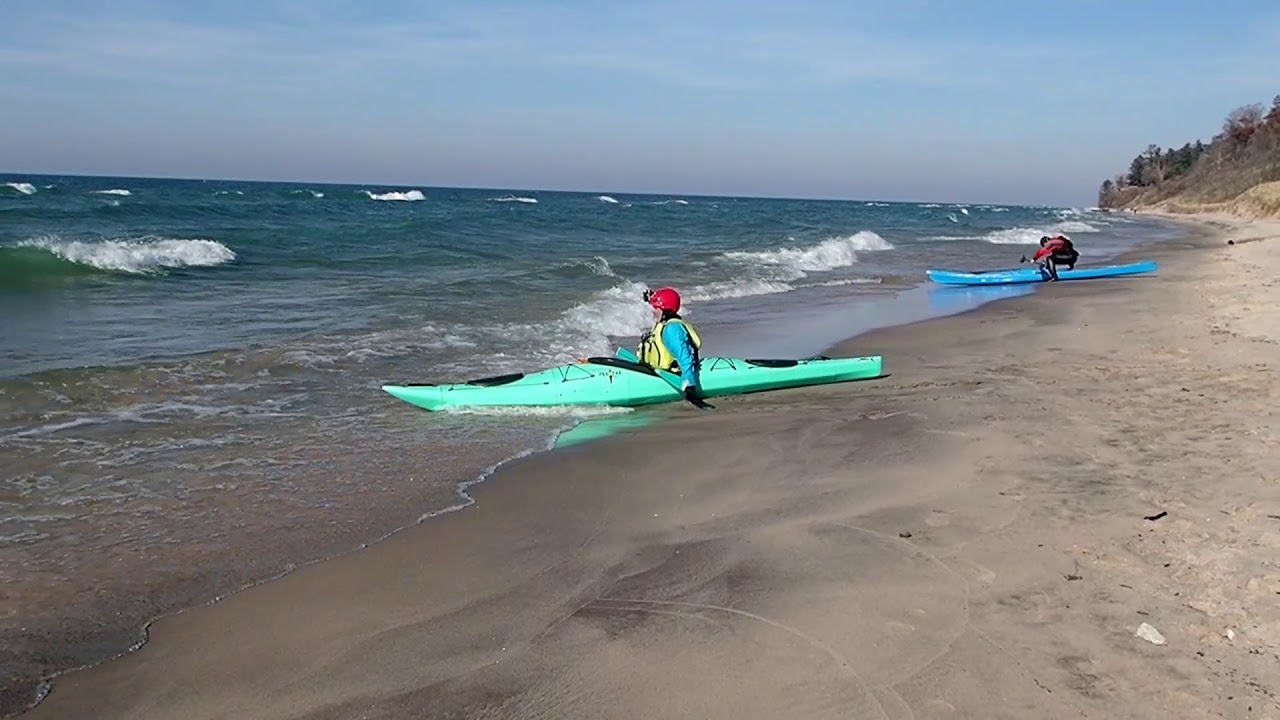 Beam is only one of several essential factors used to calculate the carrying capacity of a boat.

True but a fat 10’ boat will usually carry more weight than a narrow 10’ boat.
The OP didn’t list his weight so my reply was just an item to be considered in his choice.

The issue is primary versus secondary stability. Are you good at bracing?
If you want speed you need a longer kayak. I built a Pygmy Coho that was plenty fast. It was 17 feet 9 inches.

Modular or snap together sea kayaks might be your solution. On the water they perform about as well as a standard sea kayak. The only real disadvantages are weight and cost. Weight may not be a serious issue as you do not have to carry all of the parts at once in most cases. It might not accelerate as fast as a standard sea kayak, but once moving, performance is similar. Short and wide is the enemy of speed in a sea kayak.

As others have pointed out, stability issues diminish with seat time, and a vee or u-shaped hull actually performs better in waves than a flat bottomed hull.

I checked out the Pakayaks last time I was in upstate NY two summers ago and was impressed with the design and finish of them. But I did notice that dealer (Mountain Man in Saratoga Springs) no longer lists the brand or has stock of it. Pakayak doesn’t have a lot of dealers on their website. Though they do still seem to be in business, probably experiencing the same difficulties as other businesses in doing business during the pandemic.

Thanks all for the suggestions. Due to several factors, including availability, price, feature, etc, I got myself an Eddyline sky 10 10ft kayak. Can’t wait to try it out.