Experience/opinions with and on folding kayaks

I am looking for a light and nice paddling kayak for mostly quiet water. I’ve studied ads for ORU and wonder if any readers have experience with them. I would also consider other kayaks.

We have the Oru Coast:

It is a nice stable kayak and works well for beginners. Roomy and paddles well. Easy to assemble and disassemble after you get the hang of it. Nice and light.

The seat is not that comfortable. You will want flotation bags. Stowing and retrieving stuff below deck is a bit of a pain, no easy access without partially disassembling, though that is not very hard. It gurgles a lot underway due to the creases/folds in the hull. Compared to our plastic or composite sea kayaks, it is sluggish.

We got it as a third kayak for when people visit and we want to take three kayaks. We can fit our two composite kayaks on the roof and the Oru in the luggage compartment along with all the gear needed for three people. Or the third person can just stow the Oru in their car, even if they have no way to carry a kayak on their roof. We have been happy with it for the use we intended. Great conversation starter at the launch, people will stop and watch, very cool design.

Oru does many things well, but there is always a tradeoff for the folding and light weight.

The models other than Bay and Coast are made to be recreational class kayaks. Recreational class kayaks, whether folding or hard shell, usually can’t be deep water rescued, so should only be in distances from shore that one could swim back to save themselves if you flip. So if you follow this rule, they are fine.

The Coast and Bay versions are made where they could use a skirt and in theory could be used in conditions beyond flat water by someone who has learned how to do deep water rescues which are based on what sea kayakers do, the paddle float and T-rescues, but with slight variations). But in practice, even with the float bags that you can get from Oru for them, they are hard to do a deep water rescue with, and the act of rescuing can break the boat.

The hard is due to the lack of bulkhead, and the 2 person rescue is the TX version of the T-rescue (see issue #10 article on T-rescues at California Kayaker Magazine - South West's source for paddlesports information). And if the boat gets a significant amount of water in it during the capsize and start of rescue, when you go to drain it, the weight could cause the bracket that holds the pieces together on the back deck to snap/crack.

Also look at Pakboat folding kayaks. They take a little longer to set up than Oru boats but are very competent and extremely comfortable, also can be used in moderate white water and are safer in coastal conditions. The anodized aluminum frames go together like tent poles and fit into fabric shells with inflatable flotation and tensioning tubes along the sides. These are serious kayaks. And most of their models can be used with or without the top deck so you have the option of an open or closed boat.

I have been using folding kayaks for 20 years including 4 different models of Pakboats. Great for travel – I took my 24 pound Pakboat Puffin to the UK packed with all the paddling gear in one suitcase. The Puffin Saco is their 12’ solo recreational kayak. Flickr album I posted on this link shows my earlier model Puffin and how I packed it and carried it on a roof rack on my rental car during the trip to England. That whole bag weighed only 48 pounds and did not cost me any extra baggage charges. 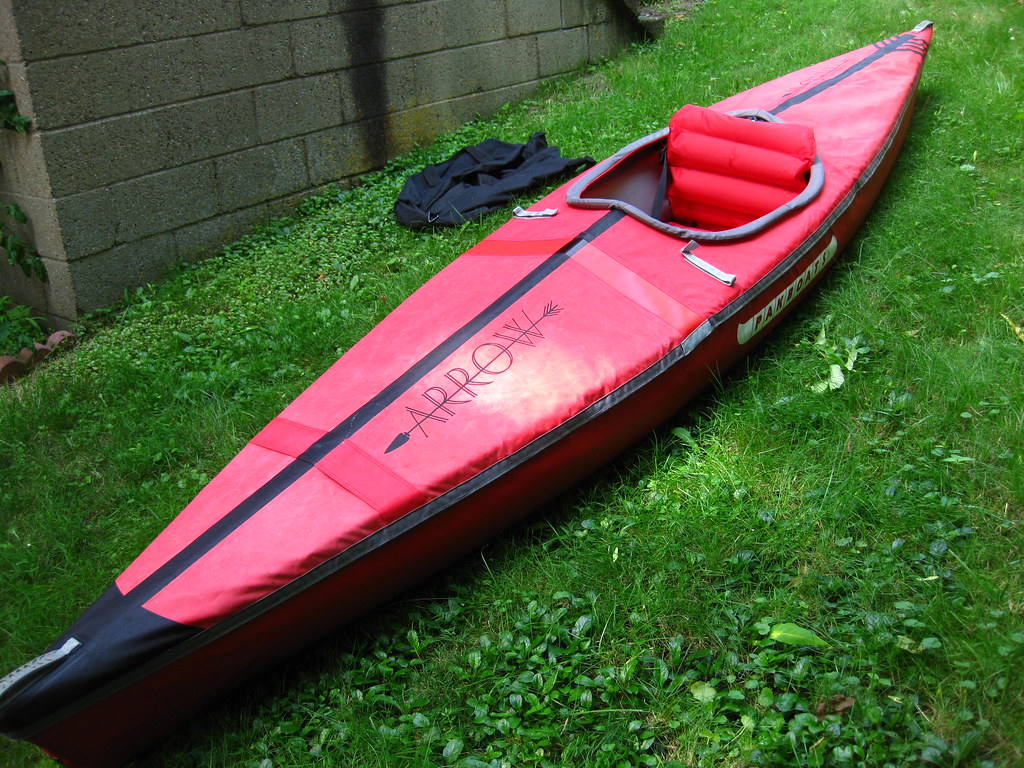 Thank you! I will look more closely at PacBoats.

My Friend Steve M. has an Oru Bay ST and I have paddled it. It’s quite nice and very responsive in flat water and in chop up to about 1 foot high. With no keel line and of course no rudder or skeg it does start to work you a bit when the wind come up. He then bought a Hurricane Ocean kayak (can’t remember the exact model) and now he doesn’t use the Oru much, so it’s for sale. It has the back-pack, a paddle, and a spray skirt and it’s ion near-new condition. He was asking $1100 for it all as I recall. If you are interested let me know and I’ll put you in touch with him

Here is their US website. Small outfit in New Hampshire. The main company is in Norway now and the boats are made in Germany. You can find YouTube videos of people using them. Company has been around since 1995 and they have very good customer service.

Welcome to Pakboats.com Since 1995 Pakboats has been designing and manufacturing a wide range of folding canoes, folding kayaks and accessories. In everything we do, we strive to provide the most functional gear possible at a fair price. The pictures...

Thank you. The kayaks look a little more “finished” than the Oru, although Oru is certainly attention getting. I am in NH so perhaps it may be possible to visit the Pakboat outlet.
For a number of years I have used a Wilderness Systems Tchaika as my “daily paddler” I love it and will not part with it. Just need something lighter, easier to transport (and with a larger cockpit).

The Tchaika is a cool boat. I saw one for sale last year and talked myself out of it for some reason.

We each have invested in Tucktec folding kayaks and love them. Very stable, safe and durable for calm lake, springs and river enjoyment. 28 lbs, and folds into a 48" burrito with a carry strap. We’ll designed, but stiff on the 1st 4 setups. Everybody tricks them out. Seat should be replaced with something more comfy. $350, or 2 for $650. The best part is the Tucktec Folding Kayak Community on FB, a Forum of over 4000 people sharing ideas pics and joy.

Thank you! I have seen the ads for Tucktec. They look a bit odd to me but now I’ll have another look. I certainly am attracted to the price.

I have been paddling inflatables lately. Don’t get the performance I did with Feathercrafts but a lot less hassle.

Thank you! do you have a particular inflatable to recommend?

I’m happy with Aquaglide and older Innovas. This is s pretty good primer Choosing an inflatable kayak. What promo videos don't talk about - YouTube
Also check out Inflatable Kayaking Is Awesome on Facebook

Geez, I thought you were making a sly reference to Wanda Tibbs.

After seeing that youtube on choosing an inflatable, that Sea Eagle 393rl seems awesome to try.

I have tried an inflatable and it was terrible. The Tucktec works well for me and my wife. Takes some muscle to fold and unfold back to the burrito but with practice it has become easier (about 5 minutes each). Seat needs an upgrade - I got one at Walmart for $17. Carbon Fiber paddle on amazon for $70 and a vest and you’re good to go

I have had a Point 65 Sweden Tequila GTX Solo Modular Kayak for about five years and love it. It is a sit on top kayak that splits in two! It paddles well on quiet water, lakes, and slow moving rivers etc. I have found it to be well made, comfortable and pretty rugged. It is designed and made in Sweden . I am 63 yo woman and can get both parts in the back of my Subaru Crosstrek with the back seats down. I believe they sell them on Amazon now! Check it out.

I like my 393RL, its a fast boat. I also have two fasttrack models that are more stable but still pretty fast. I also just added a Pakayak to my stable and its pretty nice too. The pakayak is the nesting dolls of the kayak world.

My wife and I ordered two TucTecs, and found them impossible for an 80 yr old to assemble, just too stiff! We have a couple of AE inflatables now, the Advanced Frame Sport (with the extra backbone, spine) is a very good boat, the Lagoon is OK, but does not track well