Always be careful where you beach the boat. Ants are very aggressive explorers and will find a place for food, shelter, etc.

But this is a related story out of the boat. After Irma they lowered the lake to fix the outflow. The water was so low 4x4s were driving between lake and dock. The fire ants moved in the dry ground.

Now the canal is fixed and the water is rising. AND as ants , fire ants, do they are rising up above the water. They use the grasses as bridges. They move the colony to any “good” place above the water. Which in this case was the dock.

So as I walked in the water with a hammer tapping the dock looking for loose boards.

Hitting the wrong board released a flurry of ants . The ants in the grass attacked. The ants on the dock attacked from their nest between boards at the piling. 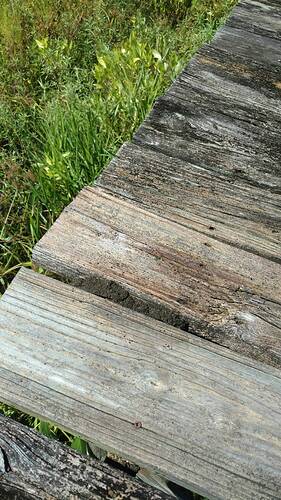 Hanging around water in the south has hazards. Not all are the obvious water things.

they are nasty !
Thankfully they are not here in the mountains, but both my wife and I have been bitten by them when we lived in the piedmont. She used to end up with the bites getting infected

We lived in Houston for 8 years , their port of entry to the US. Almost àlways had the pustules from their bites. Truly hateful little beasts.

I used to have to visit Monterrey Mexico for work. I remember the locals warning visitors about fire ants (“don’t step off the parking lot”)…even though they also have other prickly/bitey things like rattlesnakes and scorpions.

I hate those annoying little insects. I think my “Leave the planet and nuke them from orbit” would really irritate my neighbors so I have to use conventional means.

And don’t you love the way they work together?
“Ready! Get set! BITE!”

That’s what they did to me, anyway.

Rex they do do synchronized fire lighting for sure…

I was going to chime in and say “good thing we don’t have those nasty critters up here in the great white north”… Then Google tells me that we DO have them here already.

Fortunately I have yet to encounter them in my travels.

They are sneaky. The quietly sneak on to your body part to do the synchronized attack. Things aren’t quiet after that!
When we lived in Houston someone always had a bite pustule or five if they played or worked outside. We would open the pustule with whatever was handy and clean with alcohol. It would be gone in a day or two.

Oneside we just both hired the same guy to come spray both at same time.

If you want to see major battle, scoop up a mound and toss it on another.

A very interesting sculpture. Could be a profitable cottage industry.

I think they are at their worst when the water is high enough to flood. They form rafts of whole colonies to protect the queen. Touch one and they swarm like their lives depended on it.

Accidentally stuck a paddle into one of those ant rafts one time. One of the worst experiences I have come across.

Before I knew better, I thought I could drown them. The little beasts have built in PFD.

Not if it is boiling water.

I hadn’t checked his methods, just wanted to note that the what people liked about the fire ant sculpture bore a resemblence to the airiness of Lassaw’s work. If anyone is at a major museum that covers abstract expressionists, like MOMA, one of his is often out.

From Wiki, which is correct in these bits.
Ibram Lassaw was a Russian-American sculptor, known for nonobjective construction in brazed metals. Born May 1913 Egypt, died 2003 East Hampton NY.

For the LI’ers, not unlikely that the Parrish has one of his in their collection…

If you care to get your geek on, here is a study that used fire ants (and spiders) to figure out how things float and used that technique on metal to make metal float. Next, would it work on a kayak?

Lasers, spiders, ants and air help create a metallic structure that keeps coming back to the surface.