I use to paddle canoes more (fishing yaks lately) and my last solo was a Mad River Freedom Solo, or it was called the guide before that. Is there a similar performing Canoe now being offered?
Thanks

There are lots of solo canoes out now, much more than ever before. There is a list of them on this website. Find some with similar dimensions to your Freedom.

Thanks, I was just not seeing a boat with similar length, width rocker etc.

So the Freedom was a deep 15 footer with great maneuverability and high river capability that also worked OK on flat water (lakes). Sturdy (Royalex) and versatile. The Northstar Phoenix has similar characteristics and is available in an exceptionally durable lay-up called IXP if that’s important to you. The Hemlock SRT (Solo River Tripper) also has a good following as a broadly capable boat with exceptional river capability. The Wenonah Argosy also has similar capabilities but it feels significantly different than a Freedom.

If you can describe the characteristics that are important to you we can probably give you more options to consider.

Thanks TomL! Flat calm rivers, to class 2 is what I would expect would be most of the paddling and a few lakes here and the
re, mostly mild rivers. I will look at the choices you suggested.
Thank you again

If you’re patient, it’s not too difficult to find Freedoms, Guides, and even Couriers on Craigslist.

Has anyone paddled an Esquif Echo? Wondered how it compared to the above suggestions.

I have a MR Guide I may sell, needs TLC (bought it that way). It’s in Florida though. Can’t tell where you are since the new format.

I haven’t paddled an Echo but it seems like a fine choice. All the comments I’ve seen are generally positive. I remember one comment on another site saying it’s kind of shallow (quite a bit shallower than a Freedom/Guide) so not the best for serious whitewater but the shallowness helps keep the weight reasonable. The weight seems pretty light for a tough T-Formex boat. I’d like to try one.

Hi Diane,
I am in Maryland, but visit Florida occasionally and have family in the central part of the start. If you decide to sell, let me know, and we can talk about condition and price etc. Thank you!
Dan

I sent you a few pics in a message just in case.

That’s not bad at all, but have no idea about resin etc. I have had either royalx or old towns heavy layup, and the kayaks I have are HD plastic of some kind. They are stable, and good for fishing but not as much fun to just play around d in. I still have a decent tandem, but want a solo again I think in a bit. Where do you paddle

A friend of mine used to loan me a Royalex Guide (Freedom solo) when I paddled waters that I didn’t want to risk beating up my Blackhawks in. I came to really love it - very predictable, maneuverable, good secondary stability, and enough freeboard so it stayed dry. Its a very nice design.

But I never managed to find one of my own at an affordable price for me. I did find a Nova Craft Prospector 16 (again Royalex) which I now use in those same situations. The Prospector is bigger and heavier but otherwise seems to me to handle a lot like the Guide. I consider that high praise. All this came about before Nova Craft came out with a 15’ Prospector.

Perhaps a Prospector 15 would suit you with a center seat added? I don’t know much about the newer Royalex substitute lay-ups, so I can’t really speak to their durability or weight. I’ve heard good things, but don’t have any first hand experience.

One thing I have found is that when using the Prospector kneeling thwart in the factory position I need to add a fair amount of ballast in the bow unless I’m paddling with a tail wind. If I were adding a center seat I’d put it a bit ahead of the kneeling thwart location.

All that freeboard that keeps us so dry in rapids can make the Prospectors and the Guide/Freedom solo a bit of a handful in open water in a strong wind, but you had a Freedom solo so I bet you know what I’m talking about…
Happy hunting!

Thanks PJC, I currently have an Esquif Presage that’s 16 feet and handles pretty well tandem or solo , but I am starting to want the old solo again. The Fishing yaks are functional, just not as much fun.

Keep an eye out for Mohawk Challengers or Odysseys (replaced the Challenger). Also Dagger Reflection 15 (good solo with center seat) or Legend 15 (good solo paddled “backwards” from the front seat).

I read that the Freedom solo changed over its production slightly… maybe more flare? Don’t know if there is any truth to it.

I am starting to want the old solo again.

I can sure understand that… the Guide is a boat that can spoil a paddler. It would be a hard one to let go of.

The Guide that I used to borrow and the one that TheBob used to have (and now belongs to PaddlinPam) were perfectly constructed as far as I could see. The Freedom solos that other friends have had had very minor imperfections - gunwales weren’t exactly matching and mold marks - very minor things that in no way affected performance or over all look. They were fine boats, but perhaps not quite as expertly made… or perhaps I just happened to see particular boats that were made 15 minutes before quitting time on Friday. That can happen with any manufactured thing. If there was a difference in the flair between the old and new I didn’t notice it, but perhaps there was a slight change in the mold between the two that led to slight differences.

Nova Craft Supernova might be another candidate for you, come to think of it. That’s a dedicated solo design and quite lively. Has a bit more rocker than a Prospector and carries it a bit farther amidships, if memory serves.
But as has been pointed out already, there are lots of good choices.

Since TomL told me about Northstar Phoenix, I really want to paddle one. I had a Bell Wildfire before the freedom solo, and thought it wasn’t quite right for me. I am about 200lbs, and maybe not as skilled as others, but the FS was better for me.

Based on past experience, I’ve owned (2 Guides, 2 Freedom Solos, 1 Courier), I have these opinions.

I don’t know where one might easily find a Courier. I looked for mine for a number of years before I found it, and I haven’t seen another one offered for sale in a couple of years. I regretted selling mine.

My first Guide is still in service, and being used by it’s 3rd owner. Approximately 15+ years of usage, and still in nice condition.

I liked the Guide because of it’s adaptability. I used it as a gear hauler on trips of multiple overnights;I also used it on class II+ and low class III. Class III was pushing it’s capability; not enough rocker. Many other solos were/are better suited for that venue.

My newest Guide is still in like new condition. I have several other canoes I use now, including the Mohawk Odyssey, and a Bell Wildfire.

Enclosed are some Courier, Guide and Freedom Solo photos. 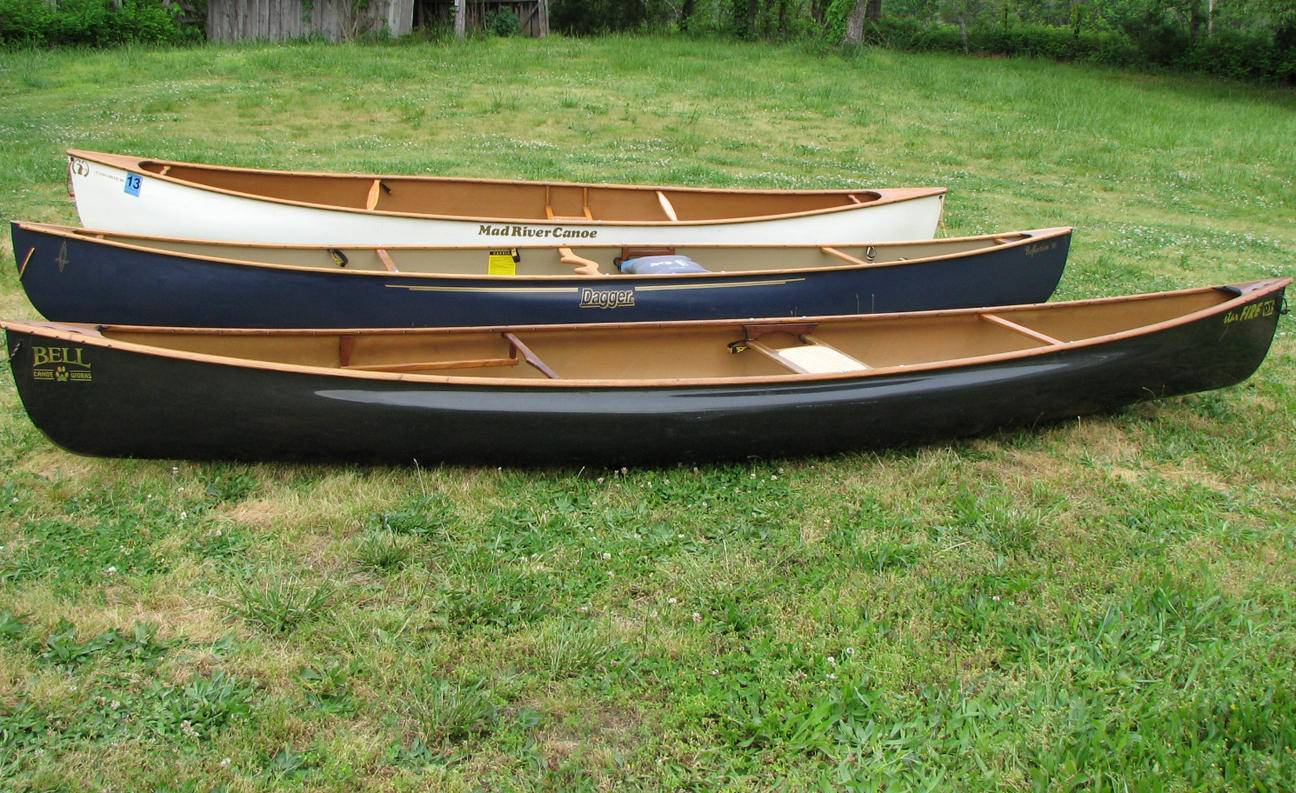 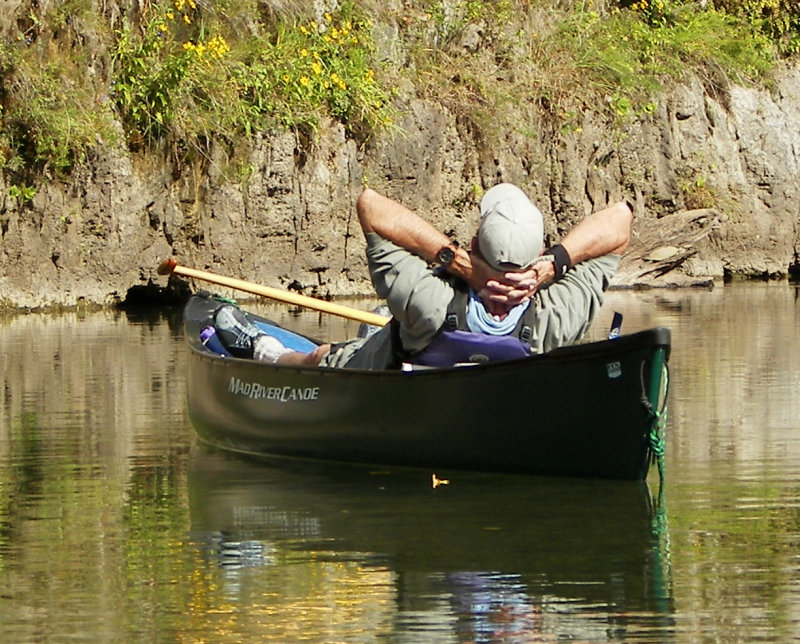 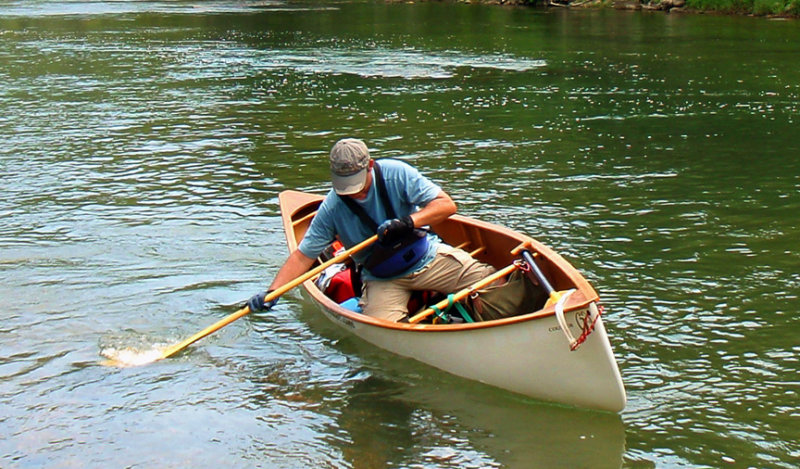 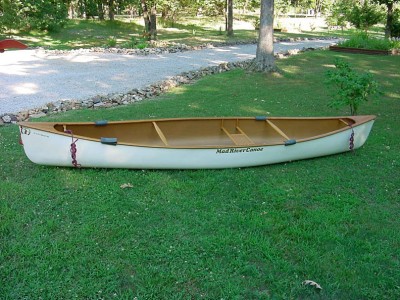