Have I placed my kayak on my J-Rack properly?

I’ve been kayaking a bit the past few years. I just got a Thule aeroblade with a the hull-a-port J-Rack so that I could more safely transport may kayak. I had a little difficulty following some parts of the instructions and just wanted to check with others to see if I have strapped it in properly. Particularly, I’m wanting to make sure that the straps are going over it in the right place. i.e. is it going around the strongest part? I’m not going to cause any bending, etc, based on where I have put the straps over it am I? I’m just checking because the manual said something about not putting the straps over the cowling (I think that’s just the opening for someone to sit… I was not sure why this was in there. I don’t exactly have enough room on my roof to completely miss the cowling and I did install the rack per manual, so this might be the best I can do. Is the reason they don’t want you to cover the cowling because the rope might slide a bit and then become lose if it goes off the cowling or elevated coaming?

Ultimately, I just want to be sure I’m not damaging my kayak the way I’ve mounted it… Have I mounted it in a way to minimize likelihood of damage? Are the cables over and around the cowling at the strongest part of the kayak? From using it yesterday, I can say for sure it was mounted securely and didn’t wobble or move at all from what I could tell at 60 mph.

Here are 2 pictures to explain: 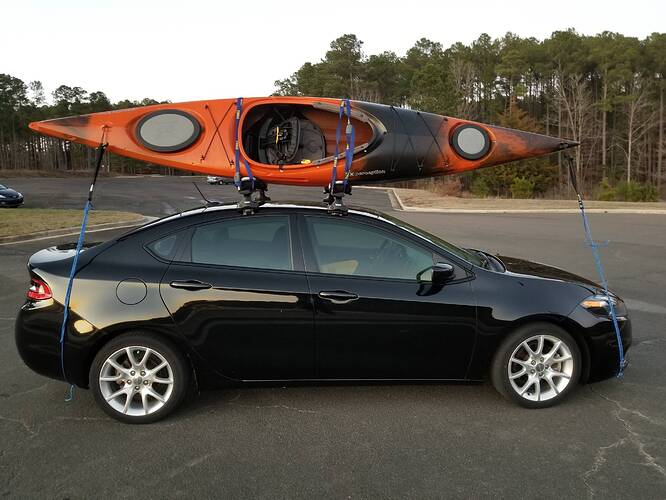 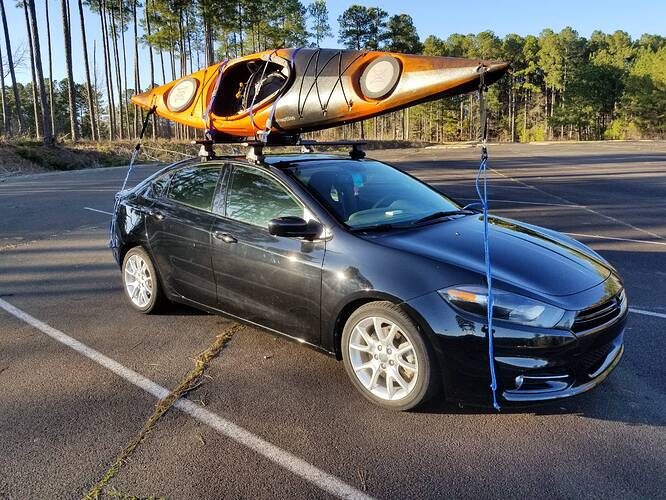 Looks good to me. I can’t see what you have it strapped down with. If they are ratchet straps you have to be careful to not over torque them. You can deform the hull, but since the boat is on it’s side , that is where it is strongest.

Basically looks good to me also.

What might help make it all a little more secure is if you could move the cross bars so they are farther apart, as this would reduce the leverage strain on the parts when you are going fast. Minor added benefit is then the straps would also be going around slightly narrower places on the kayak, reducing the chance that the kayak could slip if the straps aren’t tight.

Every time I’ve ever suggested moving the cross bars farther apart, and for that same “leverage” reason that you stated, the reply has been “this is where Thule says they should go, and who are you to think you know better than they do.” It’s a touchy subject for many. There may be some sort of crosswise reinforcement at the specified mounting locations, but the semi-tubular edge reinforcing of the body along each side of the roof is pretty strong as it is.

I keep mine as far apart as I can and still have them be secure.

Where do the straps go on the back side?

Over a bulkhead or as close as you can get. Don’t see any issues there.
But the bow and stern tie-downs - since they run to the side rather than over the bumpers, where is any loose line going to be if they disengage? Is there a risk the line would end up in the wheel well (which could pull the boat off of your roof sideways)?

I agree with those who say that you might want to get the cross bars a little further apart, but overall it looks pretty good to me.

I’d also be leery of having those bow and stern ropes possibly rubbing against the car’s paintwork. I think at least in the front I’d be using an underhood strap… The strap also guarantees that a rope won’t end up in your wheel well. 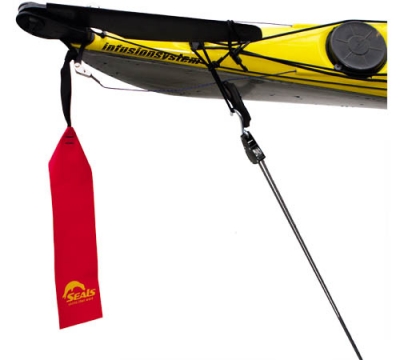 Good advice from all. The only thing I can add is that I like to have my end lines going to the opposite side of the vehicle. So, if you had two boats on you’d see the lines form an “X” or “V” front and back. This provides some redundancy if one of the centre straps were to loosen or fail (unlikely as that is). With the way you have it pictured, they counter any lifting force but if the boat were to come out of the cradle the same way it went in, the ends immediately slacken and do nothing to help. It’s a minor nitpicky thing, but it doesn’t take additional time or effort so that’s what i do.

I see that you tucked the strap ends into the pocket of the J-cradle, which is good, but you can save some time if you want by just tossing them in the car and closing the door. Don’t do this if it’s raining though, as the water will wick down the strap and drip inside.

On a related note, I see that the OP has the centre straps running directly around the cross bar. It makes sense, but I’ve been doing it the way I remember either from a Thule video or manual. This involves looping around the upright of the J-cradle and through the loop sticking out to the side. Don’t tell me I’ve been doing it wrong this whole time… or maybe “do”, because looking at it just now it looks a lot more secure under the cross bar.

One more thing… if you find you’re always using about the same length of rope to tie them down, cut much of the excess off so that it’s faster and easier to secure. You’ll find that the ropes degrade pretty quickly in the sun anyway, and replacement rope isn’t expensive if you get it wrong.

Sparky is right. I missed it.Should be seeing two widths of the strap at each point, so it is running over the top of the boat from the upper to the lower part of the Jbar. Seeing only one means that you have it wrapped around the back of the boat rather than sucking the boat against the Jbars all from the top.
You would get more of that kind of security by running the bow and stern lines so they suck the boat up against the Jbars, run them towards the other side of the car.

That looks to me like a Dodge Dart, and if so, there should be 28" of spacing between the bars (center of bar to center of bar, not inside to inside). The leading edge of the front foot should be 8.5" from the edge of the windshield. Hard to tell, but the front bar might be a little far back. I used to sell Thule at work, and it’s pretty easy to look up the proper rack placement by application on Thule.com. Placement instructions are part of the fit kit package, in this case kit1667 (13-16 Dart).

Friend had a rope come loose. He saw it and tuned the wheel BV to pull over. Tire ran over rope pulled down bow goodbye eddyline Raven it folded it like a cheap suit and it split open.

@PaddleDog52 That is one reason I like hood loops/hatch equivalent. The rope is never long enough to have that kind of risk.

@Guideboatguy said:
Every time I’ve ever suggested moving the cross bars farther apart, and for that same “leverage” reason that you stated, the reply has been “this is where Thule says they should go, and who are you to think you know better than they do.” It’s a touchy subject for many. There may be some sort of crosswise reinforcement at the specified mounting locations, but the semi-tubular edge reinforcing of the body along each side of the roof is pretty strong as it is.

The instruction are intended to be fail safe for everyone. Other configurations may be better for individuals. When I got the Thule tracks for the roof of my truck, the instructions said to mount them FOUR INCHES INBOARD of the bend at the edge of the roof. I mounted mine one inch inboard for a more rigid spot on the roof. If I were doing it again, I would go one half inch inboard. The reason for four inches involves internal bracing in the truck, but I figured how to deal with that.

Good points on the orientation of the cross bars, and especially regarding how much the J-racks tilt away from vertical because of that. If I had a car with a small rounded roof, I would want to use a rack with round cross bars so as not to have that problem.

Minor point, but if you have a cockpit cover, put it on, especially for longer drives and higher speeds. Reduces wind resistance and increases gas mileage.

Good tip on the under-hood straps; I use the Rhino Rack brand front/rear on my Sonata and they work well. I agree with using the cockpit cover for moderate speeds without serious wind, but they can come off at high speed or when really windy. Use the clip on the cover or add one if not already there.

Seals cockpit cover come with strap and loop on one side of cover. You then strap it to your hull.

@kfbrady said:
I agree with those who say that you might want to get the cross bars a little further apart, but overall it looks pretty good to me.

I’d also be leery of having those bow and stern ropes possibly rubbing against the car’s paintwork. I think at least in the front I’d be using an underhood strap…

The strap also guarantees that a rope won’t end up in your wheel well.

Technically flag has to be 2’ X 2’ in NY probably others too.