Can anyone help identify the make and model of this kayak?

I am a new paddler and I’m considering purchasing it for my GF & I, but I want to make sure it’s good enough to last us for awhile. I’d rather spend a little bit more to get something good if this one is considered “cheap”.

Considering that I would be buying this used with the seats, paddles, and vests…what do you guys think is a fair deal?

It looks like there are two brand badges on the boat but you did not take a clear photo of them, sufficient to get some idea of the maker. The dimensions and weight would help narrow it down too (length and width across the midpoint). Honestly, what I can see of the logo is not familiar. Durability would depend on the quality of the plastic and whether it has been well cared for. Any sign of damage or oil-canning on the bottom of the hull? Are the seats secure and the hardware in good shape? You might as well throw away those cheapo horsecollar life vests and get something decent if you buy it. It's not comfortable to paddle with those kinds of vests -- they inhibit arm movement and are too bulky.

The paddles look flimsy, too. The fact that it does not come with decent PFD's and paddles suggest this is a discount store special and probably not a better brand boat.

Whether it is suitable for you or not depends on what kind of paddling you plan to do. IF it's in really good shape, you might offer $300 for it. You can get a NEW decent brand plastic sit on top tandem for $600 and often buy used fleet rental boats like that at the end of the season from outfitters for $400. If it's kind of beat up but functional, I would not pay more than $200 for it. You ought to budget $80 to $125 each for decent paddles and $40 to $80 each for decent PFD's.

Have you ever kayaked before? It really is not an intuitive sport, you will do better (and be far safer) if you get some instruction. Also, paddling a tandem is not all that easy -- some of us call them "divorce boats". I would suggest you and your GF rent a tandem from an outfitter and try it out before committing to this.

A sit on top like that is a dime a dozen
for used ones.

The PFD’s are the el cheapos, and the paddles are also.

Last year, at the end of the winter, the outfitter at John Pennekamp coral reef state park on Key Largo had a stack of used tandems that were better quality and they were selling them off for $200 each with decent PFD’s and paddles.

Each one needed minor repairs.

What paddling do you want to do?
Like in what water, how far would you want to go etc. As above, the whole outfit looks like it is very bargain basement. The paddles alone are a bunch of aches waiting to happen. But if all you are talking about is ponds and creek crawling, that may not be fatal in terms of your enjoying it.

it is a
Future Beach Nexus 160T

Jack's right that the market should be full of them. If it's used I'd offer them half-price for the entire lot and walk away feeling fine if they objected. I wouldn't pay more than that.

That boat and paddles will get you out on calm bodies of water, which is fine. The paddles look like standard carbon (not CF) shaft/fg blade, heavy but not horrible. I wouldn't expect much beyond that, and if you really enjoy paddling you'll probably want to move up eventually. But I'd imagine it's durable.

I'd try to find one from that manufacturer new in a shop, just to inspect in person.

fair price
It looks like a very very heavy boat. How much does it weight. My friend bought a kayak from Costco, the thing weighed twice as much as my Necky Vector. If it is super heavy, find a different one,

Sapien is right
Here’s a link to Future Beach’s 2010 catalog that shows the Nexus 160T, which is what you have.

At 66 pounds it is actually on the light side for a tandem plastic boat, but that is because FB uses rather flimsy construction so it won’t be very tough. Future Beach is pretty much near the low end of quality for branded kayaks. If you get it, don’t ever leave it sitting on a rack or on the ground in the hot sun for any length of time because the thin plastic is more susceptible to softening and flattening. The boat is wide and those paddles look like they might be a little short, especially for a shorter person. I would be using 230 or 240 cm in a 36" wide boat like that. $400 would be a reasonable price for it, in my area. Demand may drive price up or down depending on where you are.

Help identify this Kayak ? It is 16’ with a 32" beam. Very stable , 63 lbs.
I’ve never seen another one online like it. Can anyone guess the model? 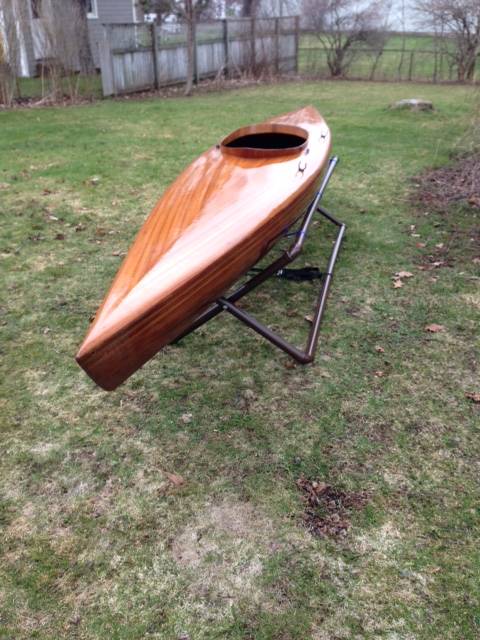 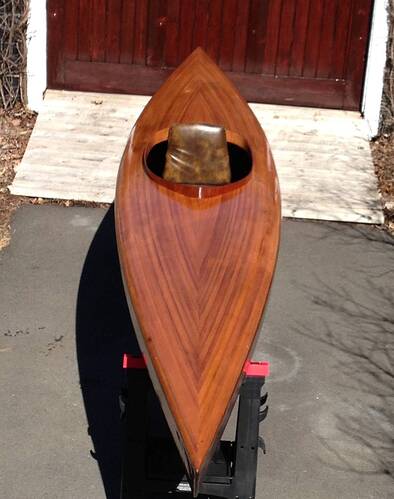 It’s obviously a homebuilt boat, could be from an older kit or just one made from a set of instructions or even from scratch by a wood hobbyist. For instance, Guillemot sells plans for wood strip models like this 18’ x 30" High Capacity Great Auk:
https://www.guillemot-kayaks.com/guillemot/node/38/draw

But they don’t have any models that wide.

It is pretty heavy for a 16’ wood-strip boat (45 pounds would be more typical) Very funky seat - I would ditch that right away and get a backband. At 32" it is going to be a barge, that is about 10" wider than most 16’ touring kayaks. 32" is as wide as many canoes. A lot of drag there.

It’s seven inches wider than my solo canoes. And twice the weight
Not bad looking for a home built but going to be slow

see you on the water.

A lot of woodworking and “Popular Science/Mechanics” type magazines used to have do-it-yourself kayak plans in their pages, or ads for plans you could order. I’ve got some vintage copies of those, going back to the 30’s, 40’s and 50’s. Kayaks in those eras and even well into the 60’s and 70’s tending to be wider that they are today, more like decked canoes. The wide styles persisted longer in the home-builder market than they did in the ready-made market.

Are the photos of two different boats or did the OP make some modifications? The first photos shows what looks like clips to hold a paddle attached to the deck. No such thing on the second photo, which has that nasty backrest.

Is that a backrest or a grey thing?

It’s the same boat but the two pictures were taken a few years apart. The top photo is taken earlier when i first bought the boat. Mr. Gould , the builder, put two clips on the deck so you could lock your paddle onto it when resting. The second photo was taken after i had taken the boat to Harmony Custom Woodcraft in Kingston, Nova Scotia, for a refurbish. ( strip and re-varnish ) The seat is folded down in the first picture. While it was in surgery I asked to have all deck hardware removed and adjustable foot braces installed. Apparently that’s a tricky business when you ask that no screws are used in the process. He attached the braces to the inside of the hull using a vacuum bag method. The builders wife made the quirky slip-on seat.The seat cover protects a beautiful folding cedar seat.
I did look online after “willowleaf” mentioned a backband but I’m still looking for one that doesn’t require screwing hardware into my $600 varnish job. I like the old seat for sentimental reasons and its very comfortable but i’m open to suggestions.

If the seat is comfortable, what else could you want?

@string said:
If the seat is comfortable, what else could you want?

I am a fan of comfort.