Here's my nomination for a Corona Virus anthem

We Gotta Get Out Of This Place was co opted as an anthem by soldiers in Viet Nam; a long long time ago, and far away …

Thanks. This song was written and released in 1971 by Bob Dylan who broke his back in a motorcycle wreck and was in traction and literally “couldn’t go anywhere”. It fits our current situation right well.

Way too serious…here is the other side with humor parity.

Michigan protesters blocking hospital workers on their way into work, sabre-wagging blunderBUSTS blasting their trumpet of ultimate authority, the false news that false news ain’t false news when it’s my news to choose, and I’ll live free and not die over your public outcry cuz I’m that kinda guy…Yes! Genghis Khan could not keep, a sanity, with this loss-leader creep, but, don’t worry! We are going somewhere! Why, all aboard! Gangway up! Blast the ship horn:

No intent to be serious. I reckon different folks have different funny bones. To me using an old classic hit by the Byrds applied to the current situation is funnier than some jingle writers take off on a Mary Poppins tune and that’s OK, but I’d never tell anyone that their humor although different is too serious just because it is different than my own. This is not a contest, so you laugh at yours and I’ll laugh at mine without judgement.

I guess there’s a lot of pent up frustration with the sequester and I had hoped to bring some lighthearted revery to all with this old Dylan tune from 1971. He wrote this after a motorcycle accident when he was in traction and indeed could not go anywhere. Lighten up friends, this is not a political message, just a sardonic bit of humor.

Don’t get political or take things in a different direction?

Good luck with that…

Sorry. Guess I was a little unrelentingly unpenting now repentively (working at the carwash blues), and I hope I haven’t burned any bridges after they’re gone, if we’re now way past it. Always liked both the Byrds’ and Dylan’s versions, although perhaps favoring Zimmy’s for its more folksy, banjo pluck and harmonica. Funny how McGuinn and company put up their tent and lyrics slightly differently than Bob’s. Was Genghis’ bro the Don Khan later a frizzy-haired King?

Anyway, I’ve also enjoyed Overstreet’s linked diddy, as well as the Stay the F@$# At Home one someone else shared. Still, tomorrow is Monday, and, as Mr. Wallenger pleads, I will need saving, at least in some sense of all the shipwrecking senselessness.

I’m no youngster so you’d think by now I’d know better, but hope springs eternal. I was listening to a mix of Dylan songs and “You Ain’t Goin Nowhere” came on and I laughed my ass off at how ironic it was considering our sequester. I made the mistake of wanting to bring others up by sharing my mirth. I reckon no good deed goes unpunished.

So you do, indeed, know better.

So Dylan wrote about making love with a broken back. The lyrics make sense now.

Sorry for punishing you Pagayeur. You’ve certainly supplied me with mirth, per revisiting this Dylan song, and Wikipedia, to learn the, “pick up/pack up your money, pack up/pick up your tent” juxtapositional play twixt the Dylan/McGuinn camps. See! You did take us (well, at least me and Rex) somewhere!

Thanks,
the punishing poet

Speaking of tangents, I didn’t even know about Dylan’s motorcycle accident even though I wore out a Blood On The Tracks album in college. I had to see what kind of bike he rode so I did some Googling. '64 Triumph Tiger…very cool. Beautiful bike. Also cool that he rode a kick start 650 given that he looks like he weighed about 90 pounds in the sixties.

In my response was the comment, “Hope springs eternal”, so probably not.

Fair enough. I reckon it was funnier in the moment: being bored, I dusted off some old CD’s and that tune popped up first. It was so ironic that I could not help but laugh. It is understandable that some others may be in more serious moods in these strangest of times. So, hope we’re on an even keel now. I’ll just go back to reading my most recommended book, “The Plague” by Camus.
Pag

Yep! Triumph’s were cool “back in the day”… 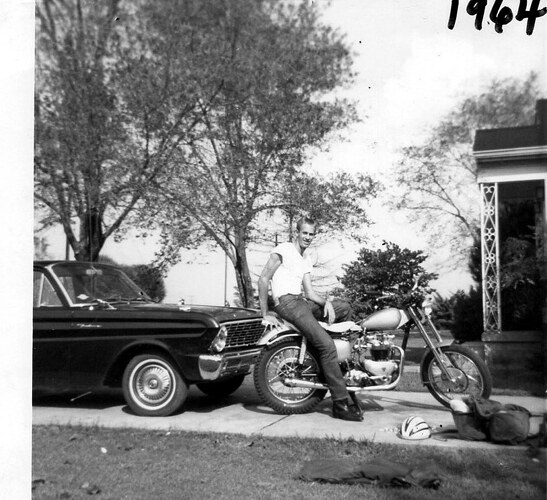 Me and Triumph bobber in front of my home in 1964. 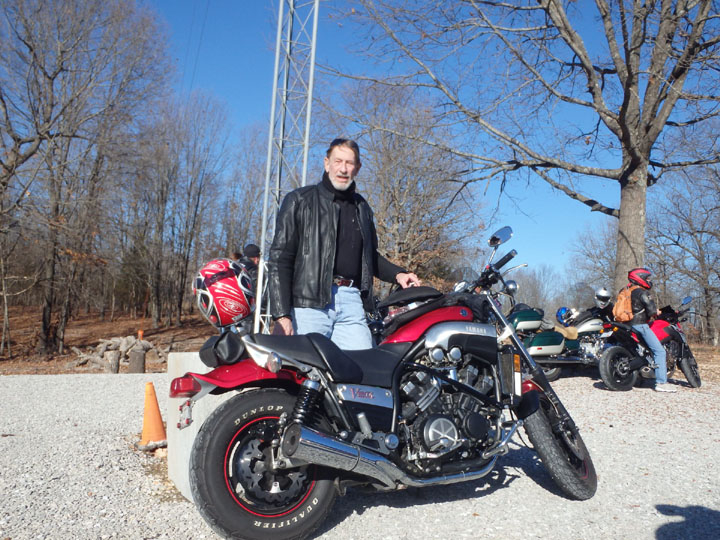 Nice bikes. I had 2 friends with Bonnevilles and one with a VMAX. I had a Triumph Trident that looked a lot like the 650’s so it was fun to outrun Honda 750’s since it really surprised and disoriented the Honda riders.