Even if there’s a ladder, I can’t see how this would be done with safety to boat and person. But yet, I sometimes see kayaks WAY up there riding on their roofs. I don’t see any special mechanical hardware, just load bars. HOW?

We put my 18 footer inside in the center isle

The year before last we had the two twelve foot long paddleboards on their side in the isle and when hurricane Irma came through it sent a five foot surge of sea water through totaling the trailer, but the boards didn’t get harmed at all. They just ended up on top of the sofa.

I’ve watched RV’rs load boats on their roof and standing up on the back they tie a line to the bow handle. Then pull up until they can grab the bow. Then they pull that up until they can fulcrum the boat over the back

Jack’s idea doesn’t seem horrible. Though it strikes me as the sort of thing you do to pack up for long distance travel, not on and off frequently.

I’ve been using the smaller unit on my suv for years to carry 3 (I don’t think they make the 1.3m version anymore)

Those are neat. I doubt I’d want to see the price but it gives me ideas. Thanks for pointing it out. 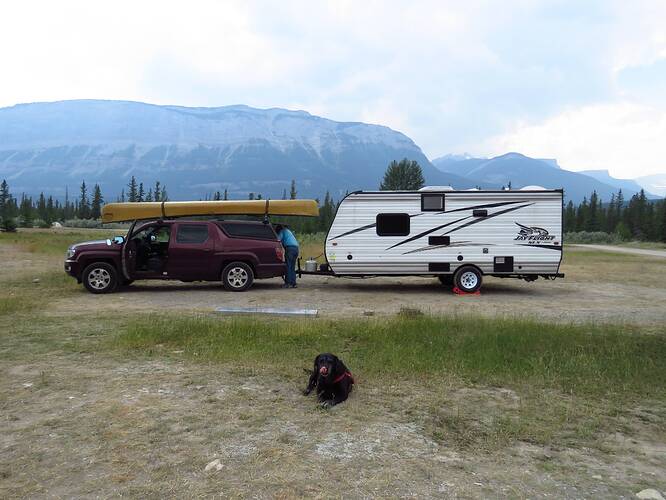 We got tired of hoisting kayaks up 7 ft to the racks above the pick up truck and got hulivators. I know that Frey Hoffmister has carried three or four kayaks on top of a class a in Europe but she’s younger, stronger and way more agile. That and generally the units are smaller over there. The part about climbing up to put boats on top is too much for this old fat guy. Then at the other end you have to take them down and what if the paddle is somewhere other than at the camp……… ?

@Overstreet said:
If your RV = Class A, B , C I haven’t got any answers. Except put the boat on your “dinghy”.

I couldn’t get this to load earlier. How you go without a “dinghy” or a “towed” behind the unit I’ll never deal with. We often go places other than the camp site which makes truck and travel trailer better configuration for us. Here is a towed with toys at the Upper P. 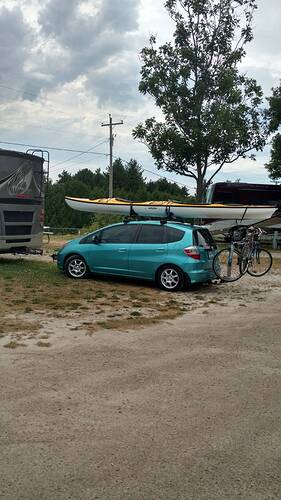 I just spent some big bucks for a vertical rack that fits on the back of my class A. It is for both kayaks and bikes. I’ll let you know how it works out. It’s still in the box in the garage- waiting for the weather to break before putting together. The longest boat I’m planning to stand up is 10 feet.

hey Overstreet, I think I met Frey on a spring/summer low water middle gauley trip. She was in the process of converting a sprinter into an rv, adding insulation to the walls while waiting on the shuttle. Boats were being stored inside at that point.

Costly, but it will fit in the underbelly gear hatch or under the furniture. But a lot cheaper than an RV and more secure for travel. Sets up in 10 minutes.

hey Overstreet, I think I met Frey on a spring/summer low water middle gauley trip. She was in the process of converting a sprinter into an rv, adding insulation to the walls while waiting on the shuttle. Boats were being stored inside at that point.

I think perhaps you met Freya Fennwood, pygmy kayaks and now outdoor photographer. Who modified a Sprinter van with boyfriend for a tour of his speaking engagements on climbing mount Everest………https://www.superfeet.com/en-us/news/superfeet-super-sprinter-road-trip-leif-whittaker-freya-fennwood.

Freya Hoffmeier is shown on one of the This Is The Sea videos, maybe 5, probably driving that Sprinter. In the end it don’t matter much.

I would point out that height is a problem if the Class A is close to the DOT height restrictions before adding kayaks. My problem with height is more gravity and effort related related to age.

@willowleaf said:
Costly, but it will fit in the underbelly gear hatch or under the furniture. But a lot cheaper than an RV and more secure for travel. Sets up in 10 minutes.

I’ve been interested in one of these for a while now. I foresee having one in the future.

For now I’m just playing around with ideas that utilize my existing two boats. I’ll be sad to part with my Assateague, but a different path awaits that is incompatible with hard sided boat ownership.

Sparky, as you may already know, Trak has their “Trak pilots” program where various Trak owners with good paddling skills around the country can be available to meet prospective Trak buyers and give them a demo paddle. I met one such pilot at a local lake a few months ago – he had driven down to near Pittsburgh from his home in western NY to meet a local Trak buyer and introduce him to setting up and paddling the new boat. On the Trak site they have a list of the pilots. The guy in the video I linked is one also – I believe Trak is supplying the pilots with demos of the new 2.0 version.

I was familiar with the Traks but it was not until I met the two guys paddling them and got to inspect the kayaks in person that I could really appreciate what a stunningly great design they are. Quicker to set up than any of my folders, present or past (I’ve owned 7 different Pakboat and Feathercraft models) and remarkably rigid. The quality of the components is really impressive. I missed the chance to buy one of the first round of production at a discount (somebody who pledged in the kickstarter backed out and sold his option). Had too much capital invested in a rental property this year to indulge myself in costly gifts, but next year I may sell a few of the boats in my fleet to put towards a Trak. Planning to arrange to meet one of the Pilots in the Spring to check one out.

Some folks may balk at the $3500 price tag, but that is close to what I paid in 2002 for my first Feathercraft (a Kahuna) – my other Feathercrafts were bought used but still cost me $2200 and $2500. A FC Wisper used to be over $4000 new… Of course FC’s were hand made in British Columbia and the Traks are made in the Phillipines with cheaper labor. But Trak does seem to have made the effort to set up their own production facility, rather than using sketchy subs (Pakboat has had problems with some of the runs of their Chinese made kayaks). And they apparently insisted on decent wages and working conditions for their production crews.

Trak has a line of great paddling accessories too, including some really nice drywear. Their flotation and storage dry bags look first rate.

The fact that Trak was able to raise over $800,000 to get the new model into production is impressive, especially considering how the marker for folders has stumbled in the past few years. I was sad to see Feathercraft close – they had been a great dealer and were very generous in giving me a private tour of their shop and HQ as well as loaning me a kayak and paddle for a day when I was on vacation in Vancouver back in 2009. I worried when they kept adding models, like the Kurrent and Heron, that they were spreading themselves too thin.

Also felt that FC never really marketed their excellent products effectively – it was mostly word of mouth that seemed to spread what fame they had. I will give credit to Trak for some very good marketing skills.

Orukayak was also brilliant at marketing and fund raising, but their novelty “suitcase” folders don’t hold a candle to the Trak product.

I’ve been holding back my enthusiasm for the TRAK since I’m not yet ready for one. Soon though. Probably in the next few months I’ll start getting seriously excited about it. I’ll have to see at that point how long it takes me to actually get one.

Production backlogs for the Trak 2.0 are evidently significant.

Who knows how the current tariff kerfluffles will affect pricing, though – Trak is in Canada and production is in Asia.
US dollar to Canadian dollar value is good right now: $1 US buys $1.34 CAN. But the Canadian currency is expected to gain in 2019.

I didn’t realize Trak is a Canadian company. That will likely help when the time comes.