How far did YOU go to get a coveted boat?

This came up in another thread and it occurred to me that there are probably a lot of great stories of the lengths that some of us have gone to in order to locate and obtain a much-lusted-for kayak or canoe. Sometimes they just seem to miraculously drop out of the sky, other times it takes years of searching and miles of driving to find that “one”.

And maybe more of us than usual are hiding out at home from the excessive heat that is making even paddling unpleasant and therefore have time to share tales.

Anybody got adventures in boat quests to share? What was the farthest you traveled, the craziest trades or the biggest lies you told to possess your personal paddling Holy Grail?

I’ve had boats transported from CO and WA to MT. By the time I factor in gas, time, vehicle wear n tear etc, makes sense to let someone else do it.

Brought one back PDX once (+/- 8 hrs), but wrapped it into an already planned family trip to the coast.

4 hours, but I had one delivered.

13 hours each way for my NDK Explorer HV. And also, 10 hours each way once for a used kayak (but this purchase was only 2 hours further than my late favorite cousin so it was an easy excuse to visit her also)

I think our longest to get boats was a several hour drive, to Maine. Went that far to try a couple too, but may not have if his parents did not live partway there.

I have delivered boats a long way, like Reno to Seattle, but I was going there anyway.
Last week I drove from Nevada to the Sierra Foothills to deliver a canoe, about 4 1/2 hours away. I got paid an extra $150 and I was ready to get out of the house anyway.

I have been really lucky and found all kinds of boats within an hour or two of home. I was getting ready to drive a full day from Nevada to Medford, OR to buy a drift boat, but stumbled on one here in town and bought it in 20 minutes.

Two-day drive from metro Denver to NW MT to pick up an NDK Explorer LV, and two days to drive back.

When I bought the Pilgrim Expedition, I got lucky. The dealer’s partner was driving to the Yellowstone area and offered to bring the kayak there. Only a 1-day drive each way that time, for us to meet him there.

Also was lucky with the surf ski. Someone was transporting two other skis east of here, so he took a side trip south to our place. We paid a delivery fee, which was reasonable and well worth it. Otherwise, getting the ski would have entailed about a 1600-mile round trip in winter. We had already made that trip three months earlier when I tried the ski as part of a short vacation.

Traveled 5 hours each way for two different boats, but each time I combined it with a visit to friends or family. One of those I bought the boat sight unseen after talking with the seller, sent her a check, then waited 6 weeks for my planned trip out her way to pick it up. She was wonderful about holding the boat that long, and it worked out great.

Massive credit card shuffling. :- ) But hey, only paid $60 in interest over about a year and a half and it just paid it off!

I live in Eastern NC, ~ 15 minutes from I-95. I am someone, who is constantly shuffling my fleet. Nothing for me, to drive 4-6 hours, to get the objects of my desire. Namely hard to find kayaks. I have done that numerous times.

Longest trip was to Naples Florida. 16 hours each way, with an overnight stay. I bought an Epic 18 and a Cobra Expedition on that trip. Needed to buy both kayaks, to “justify” the drive. I sold the Epic 18, to a guy in Nashville TN. He wanted to use the Epic 18, in the MR340. Meet him in Asheville NC to deliver the Epic. That was 6 hours each way. He paid me extra, to save him drive time. That is ~44 hours tied up in the Epic.

I drove 16 hours round trip ;to the Florida line, to buy a CD Ignite SOT. Kayak was in mint condition. Paid the owner an extra $100, to meet him at the Florida Visitor Center. The CD Ignite was used by my father; as a transitional kayak, while he recovered from a broken ankle. Later resold the Ignite, after he was able to get back in his sea kayak.

I have gone to Lake Hartwell/Anderson in SC twice to buy a kayak. Bought the kayaks from Pat, a spunky ~80yo. Bought my beloved Valley Nordkapp LV from her. Still have it. Also bought a Nigel Foster Silhouette from her. It now resides near Virginia Beach.

Went to Greenville SC with my father. He bought a Heritage Expedition XL SOT. That was ~12 hours, round trip. Bought the Heritage from an interesting fellow, named String. Enjoyed meeting him. The Heritage is still in the kayak barn.

I have had many 5-10 hour round trips. Most likely my next kayak, will involve a journey . Very few interesting kayaks, in my area.

Someone else can go back through the history to see how long I’ve been waiting for the Trak. I don’t want to know.

Ann Arbor MI to Anderson SC for this one but we also visited my wife’s parents so she thinks that was the main goal of the trip. 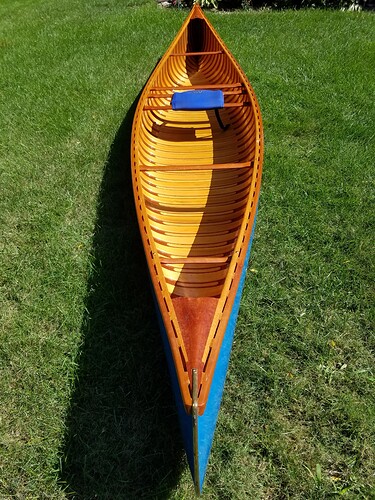 I have found a wood and canvas Old Town, an aluminum drift boat way under its value, an aluminum power boat, an OT Canadienne, a Bell Northwind, and a Sawyer Charger near home but I look really hard.

Someone else can go back through the history to see how long I’ve been waiting for the Trak. I don’t want to know.

In your case, it really should!

I wonder if traveling six hours to demo a boat that turned out to be a dud counts.

Great topic! I once flew to Boston for work and started cruising Craigslist at dinner on the first night. I saw what turned out to be a Prijon Interceptor and I asked the hotel manager, hypothetically, if they might be able to store a kayak for me at the hotel somewhere if I bought one. He told me yes, they’d be happy to store it for me (as a premier member) in their back room. Well, I did buy it and got it back to the hotel on top of a rental car and the hotel manager stored it inside for me a couple months before I was able to drive back up there and get the boat (10+ hours each way.) I am eternally grateful to the manager at the Holiday Inn in Marlborough, MA for doing me a solid. My boss and everyone else thought I was crazy flying into a city and buying a kayak from Craigslist, but I knew I had a plan and I knew I had a rare boat and a piece of kayak history.

A vintage, barn-found, downriver racing kayak will be heading to Central Virginia tomorrow from its roots in New England, (found outside of Hudson, MA.) If anyone knows anything about…

I had to drive about 100 miles to where my most coveted boat was built. However, I think I made that trip a few times before i really made up my mind about the model, the color and the layup. One trip was just for a demo of a couple of their boats. After the demo I had some real doubts about going ahead with the deal, but after a lot of thinking I gave them the order. That turned out to be one of the best decisions I’ve ever made.

I’ve picked up two boats of my own (Mad River Flashback and Blackhawk Ariel) at the Ozark Rendezvous - which I’d have gone to anyway - but that’s about 11 hours each way. A considerable drive.
I think I may have made longer dedicated boat purchasing runs for boats coveted by others. I did a run up to La Cross Wi and back (about 2.5 hrs each way from my home and then delivered to an Ozark 'vous) for a Blackhawk Proem. I once drove four hours each way to pick up and deliver a really nice royalex burgundy Bell Wildfire with gold trim for someone here in town.
I kind of enjoy missions like that. Its a little mini road trip with purpose enough to make it worth burning the gas.

I drove to Kittery, Maine from CT one time to pick up a new Old Town Penobscot 16, not because of availability, but for price and no taxes – cheaper to drive up there and pick it up than to buy local. We also drove up to Portland, Maine and then took the ferry out to Peaks Island to buy an NDK Explorer LV. It was a one of a kind custom build that was never picked up. Same story there, too – lower price, no taxes, and custom outfitting done at purchase made it quite a bit cheaper to go there than to find one here. Plus, we could paddle in Casco Bay while we were there. Win-win!

LOL We have done the same drive to Anderson some 18 times. Three times to work on a boat and several others to visit with the MacKenzies. Its a 21 hour drive each way. Made our trips to NJ when LW was there veritable afternoon jaunts ( 2.5 hours one way and some 20 trips to help build a Nakoma or more accurately to be allowed to work with direction!)
Other notable trips : Illinois to pick up a Monarch but that was in conjunction with the Ozark Rendezvous which is a 30 hour drive for us and also 28 hours to Florida to pick up a 22 year old mint condition Curtis Nomad but that too was in conjunction with a canoe trip.