How light is to light? 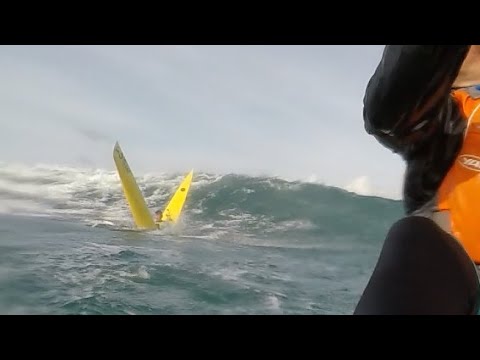 No such thing as too light, just not strong enough.

That is not the time you want to learn how to put on a PFD while in the water.

That should buff out…

That would be an interesting rescue.

Not strong enough is good or better. I wonder if a hull weights zero would it handle worst?

I would consider what he did normal but possibly rare. Hull shouldn’t go like that. Only excuse would be flat water race layup. K1 they don’t use surf skis.

I wonder if that surfski was previously compromised in some way? It looks like the type of forces you would expect to encounter.

Support both ends and weight the middle = a disaster waiting to happen. I’ve seen two sea kayaks fail in the middle from the same dynamic force of overweighting the middle; one on land as someone quickly sat in the kayak and one at sea jumping a similar wave. Neither was as catastrophic, however both were ruined. I’ve read of ships at sea split in two for the same reason. In those immortal words of Forrest Gump, “–it Happens”

A bit off topic, but why is it that people who post videos think they are somehow “enhanced” by adding crappy dance (or thrash metal) music tracks? Relevant to bits those of us on here might be be drawn to, when I am watching scenes of paddlers on the sea, a wilderness river or in spectacular whitewater, I want to hear the ambient sounds of water and wind and birds, even whooping paddlers, not Muzak. I almost always have to mute the audio when viewing video samples any more. Other than a few carefully edited and sound-matched pieces using subtle acoustic instruments, “dance tracks” don’t jive with water sports documentation.

Maybe I’m just getting to be one of those fretful geezers who picks at everything, but I have also noticed that trend has crept into documentary films and TV features. The urgent, repetitive ear-worms that are in the background of everything from news reporting on national crises to PBS nature programs has become really annoying. I’ve bailed on several, or switched to mute plus closed captioning for some.

I place partial blame on filmmakers like Ken Burns and Steven Spielberg for setting the trend. The latter blighted “Amistad” by being unable to restrain himself from overlaying an intrusive swelling musical track on top of slave revolt leader Joseph Cinque’s moving “Give us free” courtroom oration at the climax of the story. It’s like Spielberg thinks his audiences are too dull and stupid to know how they are supposed to feel while watching his films and he has to add dramatic music to prompt us from our troglodyte stupor. I suspect the unanticipated success of his Jaws and Close Encounters sound tracks warped his mind about when it is and isn’t appropriate to “gild the lily” in adding music to drama being created well enough already by dialogue, context and acting.

Hissy fit completed, I will now return to chasing squirrels and small children off my lawn…

My friend sends me paddling videos. More talent in editing than me but I like raw video.

I’ve gone over waves like that and came down hard, but never try to launch off a wave. It helps to slow down as you crest the wave, lean back, and brace lightly. This reduces the impact, but does not eliminate it.

It looks to me like that wave is 6-8’ tall. Consider it looks as if the tail of the broken ski is as high as the wave. That ski is 20’ long and he’s 12" in the water, meaning the tail of the ski is likely 7’ in the air.
I doubt any ski would survive a 7’ drop with a 220lb paddler in the seat, perfectly suspended between a huge wave and the trough.

It can be hard to avoid though. When the waves are big like that, you need to sprint through the break zone between waves. If you mis-time it, a 6’+ breaking wave is a sure way to destroy your ski. Paddling hard over a near-critical wave can be very hard to avoid in large surf like this.

And I read the youtube comments and someone quoted the Stellar warranty saying its void in the surf zone, but this was not IN the surf zone, it was just outside it. The wave was not critical yet (curling over itself/breaking). It is perfectly predictable that skis need to survive some degree of this abuse. 7’ of abuse is extreme, but 3-5’ is predictable and I hope most brands expect impacts in the 3-5’ range.

Once surf is larger than 3-4 feet (depending on period), I only go out through harbors. 5’+ surf is a boat killer. Australia doesnt have as many harbors though, so they just have to deal with it. Extremely impressive seeing guys make it through 6’+ breaking waves in the aussie races.

Too light is not dependable under rough usage.
There is a thin line between rough use and abuse.
Free falls in mid air into a wave might be construed as either.

When I was a lot younger I thought getting air in the old Jeep Waggoneer was great fun until I broke the front axle at 11,000 feet and had to walk out. That was definitely abuse.

Willow, I couldn’t agree more about background “music” . There are some decent TV shows that I won’t watch because I can’t hear the dialog for the noise. It’s great when the hero has to rush to the rescue with drums pounding and horns blaring.

Hearing aids may help that…
Some act as little frequency mixers… seriously
It’s normal to loose high frequencies which is where most female voices fall.
Then again it may be a blessing…

Couldn’t agree more. Why do video makers ruin outstanding video by superimposing artificial sounds? The sounds of nature, waves crashing, even an occasional paddler’s *&#)@> exclamation would be much preferred when pounded by a wave.

I listen with hearing aids. My wife, who according to her, has good hearing often can’t understand them either. When the blasting ‘music’ stops , no problem.

Does mean not up to required possible conditions to me. Unsafe! How much slower is a kayak that’s 5 pounds heavier?

I think you are missing my point. I am not saying anything about the suitability for those conditions. Just commenting that light weight doesn’t mean something isn’t strong. Adding weight doesn’t necessarily add strength.