It’s discount season on Kokatat dry suits and I may make the plunge. Does anybody have experience with the 2-piece switchzip suits while Greenland rolling? The reviews I’ve read online are obsessed with the bulk of the waistline on these models but most only speak to everyday paddling. No idea whether the extra material would be a hindrance to the more extreme flexibility required for some rolls. (I’m not quite to the point of investing in a tuilik yet.)

I’ve had a Radius for a few years and used it for surf/whitewater/touring. The drytop portion is more tailored than the torso of a front entry Drysuit.

The zip is more fiddly but with some practice easy enough with patience.

I’m sure others will provide their insights.

It is not a problem. I got one of those suits last year. The knob over the middle seems it will be a bit much until you actually start doing anything, then you don’t notice it.
Getting the zipper lined up right to start has thus far required some decent awareness on my part, and my readers to see if I have it (lined up) right. But IMO that stuff is minor compared to the gains in convenience from the 2 piece design.

Cheers and thanks for the testimonials.

I have a Radius. The zipper and knob have never been an issue, nor do I find the waistline bulky, On the other hand, I think that any drysuit (and layers) are a bit inhibiting and as much as I love my Radius and its versatility, I’m always happy when the water warms sufficiently so I don’t have to wear it. No comparison to the freedom of a rashguard and paddling tights.

I’ve seen photos of paddlers wearing tuiliks and always wonder what happens if they’re in cold water, flub their roll, and have to exit the boat? What’s worn under it?

@Rookie said:
What’s worn under it?
Is this a variation of the old scottish kilt mystery?

Ouch, you created some nasty images in my head. I better pass them on…

Anyway, I have an Icon. It is basically a Radius without the hood and with only one zippered pocket. Lining up the zipper is the biggest problem for me, but I am getting much better at it. I have never had problems with the knob while sitting in the kayak. But I have sometimes felt some conflict between the back rest in the kayak and the bulk around the zipper.

I don’t do Greenland rolling, except the basic Greenland roll, so I can’t really comment on that. Also, I bought all my kayaks when I was 28 kg heavier than I am now. So I have plenty of space in the cockpit, no matter what I am wearing.

What’s worn under it?

Most suits are dry until they get wet. Then they are not dry suits.

But a drysuit remains a drysuit even when it is wet.

I’ve seen photos of paddlers wearing tuiliks and always wonder what happens if they’re in cold water, flub their roll, and have to exit the boat? What’s worn under it?

Anyone wearing a tullik that is worth his salt never fails to the point of coming out of there boat. They might fail a trick roll like a bowling ball roll but to come out of ones boat would be so shameful they would never have the nerve to ever be seen wearing a tullik again. No iam not joking. A true greenlander never comes out of there boat. Not any I know at least. Me included.

There you have it. Roll or drown.

I wear a Kayak under my Tuilik 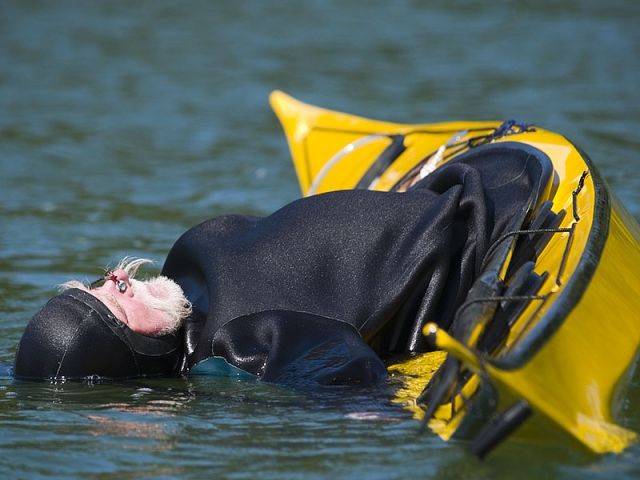 @roym said:
I wear a Kayak under my Tuilik![

Yellow Looks good on ya,

Panic makes people come out of their kayak. After hours and hours of practice perfecting different rolls , why would anyone panic? The kayak is the largest PFD a paddler has with them. If any particular roll would fail, we just do a different roll and come up. All a person needs is just a breath in order to continue.
I like to do slow motion rolling and it really helps to dial in a roll. Sometimes I practice linking different rolls to the music in my head.

Except for being sucked out of your kayak in big surf or if in WW and in a strainer or in a destroyed kayak…their is no reason to go from the safety of being in a perfectly sound kayak to swimming …and having to just get back in in order to paddle in. {I would have no problem being tied in my kayak} Especially when kayak wrestling. {a fun game to play once rolling is second nature}

I never wear a drysuit under my Tuilik. If I have a Tuilik on, it’s to practice rolling for several hours. I wear Neoprene on my legs for padding and comfort from the cold of the hull sometimes. When I paddle to go somewhere, I don’t wear a Tuilik and nobody can tell me from any other paddler out there. In the summer, many times , under my Tuilik, I wear shorts or Reed chillcheater pants. I get too hot paddling in a Tuilik.

In the cold, to paddle, I wear a Drysuit. with fluffy bunny layers beneath.

After many hours of practice there is a threshold that a person passes. Coming out of the kayak is reserved for exiting on shore for a pee break, a bite to eat or to load and drive home.

I hope this does a small amount to actually answer your question @Rookie.

In order to more fully understand those of us that Greenland roll. Think about Basketball…people that are serious about basketball spend hours and hours shooting free throws…just to play that game. We Greenland rollers practice to perfect our rolls. It’s part of the package of kayaking to make us one with the water and with our kayak.

Kayaks were designed to roll…they become an extension as we swim with our kayaks {like a porpoise} Sometimes I practice my timing…rolling out thru the surf as I paddle out. It’s all part of the game.

I hope this does a small amount to actually answer your question @Rookie.

It does, Roy. Thanks. Also convinced that you’ve grown gills.

@roym said:
Panic makes people come out of their kayak. After hours and hours of practice perfecting different rolls , why would anyone panic?

I agree with you generally. Practice ingrains muscle memory of any given technique and removes unnecessary thought (and second guessing). And, yet, even those with copious amount of practice and ingrained technique can blow it in “combat conditions.” Why? The answer is that most practice takes place where there is little or no danger. There is an understanding of no consequence for failure (except perhaps a bruised ego). Once the venue changes and there are perceived physical consequences for failure, then the body adrenalizes. FIght or flight kicks in. Gross motor skills trump fine skills (no matter how seemingly ingrained sometimes. Perception and thought can be altered (to the negative sometimes). Then what was routine in practice becomes challenging and can failed.

The parallel can be found in combat sports. One can do all sorts of technique ingraining and refining, strength and stamina development. But, if you don’t engage in periodic and increasingly challenging sparring sessions with a non-cooperative partner, then one is very likely to fall apart in a real bout where the opponent is seeking to incapacitate and/or knock you out. (Then imagine what would happen in the continuum into a real life self defense scenario…)

Simply spending hours of practice in the pool or flat (warm) water conditions will ingrain technique. But, it alone has not necessarily prepared one for need-based rolling in adverse conditions where the water is cold and turbulent, the wind is howling, the waves are kicking and one is “alone” (even when with others). In these type of situations, where consequences of failure are real, again, the body adrenalizes. Unless, one includes practice in increasingly adverse conditions, it is hard to know what “flight or flight” reaction will do to one’s technique, perception and emotional state.

Your statement about rolling as you paddle out through surf is certainly a way to practice and perform in increasingly adverse conditions (as would partaking in ww experience up through the class continuum). This needs to be an integral part of practice for anyone who wants a roll to be as close to reliable as possible in reality and need-based scenarios.

I initially got into paddle surfing as a way to further develop bracing and rolling skills. I consider myself a pretty competent roller. But, even now, I have been blown out of my craft, pinned under for too long in cold water, and/or just getting gassed/exhausted by having to roll in a succession of repeated ass-over-head capsizes from one breaking wave to the next. One can be “practice proof” but I am doubtful one can be truly “combat proof” (at least for those who pushes his/her boundaries) in adverse conditions. Stuff happens.

PS. I used to wear wetsuit or drysuit under the tuliq. The usual immersion gear, tho’ always thinner or with less layering given that the tuliq is already 3 mm neoprene. The buoyancy of the tuiliq combined with the narrower Greenland SOF made certain techniques easier than would be with usually wider production kayaks. A lot of the rolling premised of the balance brace is very difficult with a surf kayak and impossible with a waveski.

“PS. I used to wear wetsuit or drysuit under the tuliq”.

I wear a tuilik I made only when it is cold. It is oversize to fit over a dry suit, without encumbering, especially sleeves.
Warm water i practice rolls in rash guard/NRS hyrdoskin. When cold comes and I roll, the tuiliks prodigious buoyancy makes me have to force the kayak to capsize. Big dynamic.

@Paatit said:
sing Quotes
“for need-based rolling in adverse conditions where the water is cold and turbulent”

A more researched presentation of underlying reasons for the need of such a “practice” approach:

As above, the concept of never coming out of the boat needs to be paired with the conditions someone is paddling in and the paddler’s preparation for them. I don’t like these blanket statements. I certainly hope someone pinned against a rock or a strainer in WW would come out of their boat.

I don’t feel deficient for coming out of my boat my earlier sessions in surf. Rather I am pleased with the fact that I ultimately managed to stay in thru the disorientation and go for a credible roll twice.

I don’t feel deficient for not having the body feel to figure out my place relative to the wave motion that knocked me down in both those attempts. So I ultimately had to exit because I was out of air and oomph. I feel better for subsequently learning how I should have executed things differently. I would be thrilled if I get another crack at it and succeed. (Haven’t been in real surf since then.)

I know of at least one pretty expert Greenland roller, who has been invited to do some informal coaching. But all of their work is in ponds and protected flat water. I would never expect them to be as solid a roller in waves, surf or strong wind. Were I to meet up to paddle with them in those conditions, I would have my rescue gear handy. I am personally all too aware of how conditions can change ones ability to respond.