Hi all,
Does anyone have any recommendations as to what kayak cart I could use that would also be high enough to easily move the kayak from the cart onto a Hullavator?

Depending on the vehicle, the hullavator will have different clearances from the ground. What is your clearance?

You could also build a ramp for the cart to help match the clearance.

In general carts to carry canoes as well as kayaks will have the height you want. They are also larger and less compact. Might be easier to add a couple of inches of lift.

I have a Seattle Sports cart with 16" wheels. Great cart and makes moving my boat to my Hullavator quite easy. I drive a Honda Fit, so the Hullavator cradles extend nicely low.

I expect you prefer to buy something rather than make it yourself, but maybe my tall dolly will spur some ideas. It’s made from an old baby jogger/stroller frame. It even collapses down somewhat, although I have that defeated by the wooden bar across the bottom. I can use this to move my kayak around, and then I slip saw horses under the kayak if I’m doing some sort of work (touching up the Lexel bulkhead seals in this case). 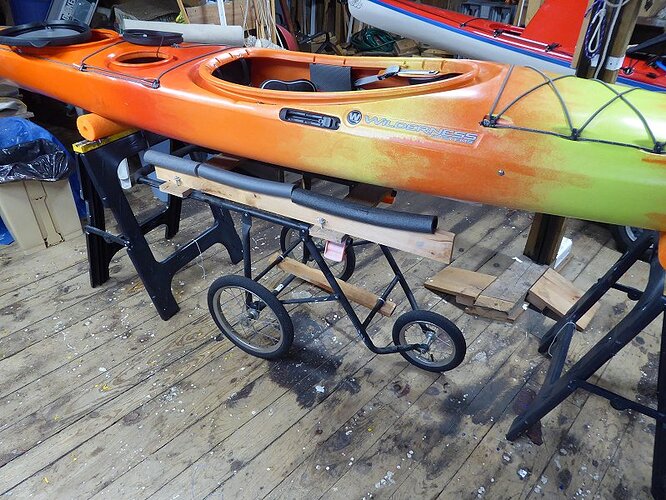 It will depend on the height of your lowered Hullavator, but if you ever want to take your cart with you on the kayak, the cart will probably not work if it’s too large. Carrying it on the deck would likely negatively affect the stability of the boat as well as make it more susceptible to the effects wind.

Having a cart that will fit into a hatch saves you from having to take it back to the car after a long carry to the water or risk having it or components stolen if leaving it at the launch. It also keeps it available if doing carries between bodies of water.

So if the cart is the same height as the lowered Hullavator, You will lift it the same amount . You will do the lifting on the beach or by the car. I personally would opt for a cart that is a half lift height , and do half height lift on the beach and the other half by the car. Unless magic is involved .

That’s actually not a bad idea. The Hullavator arms come down about midway to the bottom of the doors, so I definitely think your idea could work

sigh Sadly no magic lol And you have a good point!

Thank you, you’re right. I’ve been doing more research on Kayak carts and realized I will need something stowable

I would so much prefer to build something but I’m not that handy, and I definitely don’t have the space.
Your setup is cool though!

I have a Jeep Cherokee, so they don’t come down nearly as low unfortunately. Looks like I’ll have to make do and be happy to have at least half the distance covered

I use a C-Tug kayak cart, which is collapsible, stowable, and durable. What I’ve found is that when you’re ready to remove it from your kayak and you just release the straps, you can pretty easily lift the bow up to arms-stretched-up height. It may not be too difficult to just give it a half twist to prop the bow at least into the hullavtor arms.

I’ve been thinking about a ctug. I’ll look I to it some more thank you

I finally got the Hullavator installed…is it normal for them to be fairly difficult to pull down and lift them at the same time?

I’d think you would want/need to stay with a low cart. The higher you go, the higher the center of gravity would be. That could make it very tippy on anything other than very flat surfaces. You could spend alot of time picking your boat up when it falls over?

Something low, that had gas struts to let it rise up in an “assist mode” would be the ultimate though!

You read my mind! I can’t believe there isn’t one already on the market