Hi All,
A quick question from a newbie. A few actually.

I call it perimeter line, also deck line. Life line no, has too many other possible meanings. Confusing in a rescue. In fact using a color is good too, you can tell someone you are rescuing to grab the blue, or the red line. As ling as they are not color blind in the color family you have chosen, that will get their hand to the right place.

It should be loose enough to get someone’s hand with a glove on it underneath. Some people don’t get it when they redo the line. Don’t follow their example. Here is a link to info about this on this site - https://paddling.com/learn/deck-lines-rigging/.

As I mentioned in another post about this boat purchase, I redo mine every couple of years on the boat that sees salt water. You can get the line from lots of places. Here is one source, but it is black. Knock around withsearches and you can find it that is colored or even reflective.

If yours is too tight you probably should replace it. Set it on the loose side when you first put it in and leave a bit spare to make changes. Then set the tightness after it has been wet a few times.

“Deck lines” are how I’ve always known them.

They should be loose enough to easily get your hand under it and hold on. If this is difficult you should try loosening them. They should sretch very little, as opposed to bungies which are designed to stretch to secure items on deck.

“Deck line”, right. I was trying to remember the term the instructor used but just couldn’t.
Thanks.
I can certainly grab on to them but having a paddle in position for a float rescue is hard (but doable).
Ok, I will replace them.

@SpaceSputnik said:
Ok, I will replace them.

Depending on how they’re secured, you may be able to just untie a knot and re-tie with more slack. Maybe there’s not enough extra though. If they’re frayed, brittle, or rough then I’d be replacing them.

Replacement frequency depends on how you store the kayak. I think the sun will do more damage the lines than salt water but it is good to rinse them thoughly and spray with 303 periodically. Good care they should last year’s. I but a few kayaks over 10 years old and lines were good. Buy quality lines with 3m reflective tracer in the line. Some of the kayak supply companies will stock it. Use the proper knots to rig it
.

I am not fining much in terms of kayak specific products, but based on what @PaddleDog52 posted it seems that it should be a strong no-stretch line. As an example, would this do? https://www.amazon.ca/Paracord-Planet-Tactical-Parachute-Assorted/dp/B007ZSBLRG/ref=sr_1_fkmr1_2?ie=UTF8&qid=1501620720&sr=8-2-fkmr1&keywords=cayak%2Bcord&th=1

I’ve been getting a lot of stuff from these guys lately. I didn’t find anything that fit, specifically looking on their web site but it wouldn’t hurt to have a good look and call them if you don’t find it online.

… and then let me know 'cause I should redo mine soon too.

@SpaceSputnik the line you are looking at is 4mm paracord. It would do in a pinch but mostly kayaks use 5mm cord.

@kfbrady said:
@SpaceSputnik the line you are looking at is 4mm paracord. It would do in a pinch but mostly kayaks use 5mm cord.

Thanks for the link.
5 mm…I measured the existing lines and the cord is actually 3 mm. But maybe I can feed 5 mm as well.

Also, the knots on that line are quite elaborate. Anybody knows of any instructional materials on how exactly tie that line?

@SpaceSputnik said:
Also, the knots on that line are quite elaborate. Anybody knows of any instructional materials on how exactly tie that line?

Post some pictures of the knots and rigging. There are quite a few here with knotty knowledge. 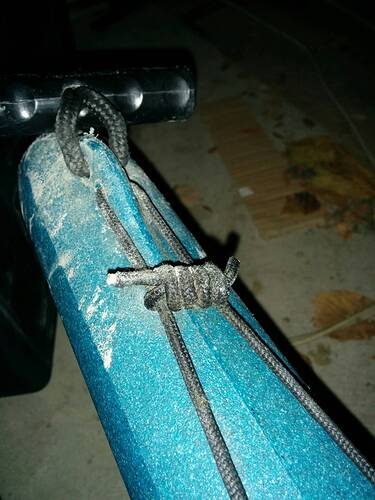 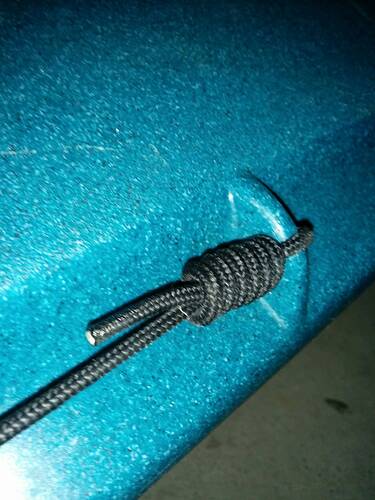 Maybe this one, doubled in the first photo and tripled in the second?

Looks like a double fisherman in the first picture, then maybe a variation of a barrel knot with more turns in the second.

Not sure quite what’s going on with how the two sides are joined together in the first picture though.

The actual knots used don’t need to be identical. They do need to stay done up. So, no shoelace knots here…

@SpaceSputnik Why are you making this so complicated? I just looked at the link for the reflective line in PaddleDog’s post and it is good line. I have used it, and it will outlast some of the other stuff I have tried. It even says it is for perimeter line. So why not just get that rather than messing around with weird other stuff like parachute line? Which by the way will likely be a PITA to get the deck fittings.

@Celia said:
@SpaceSputnik Why are you making this so complicated? I just looked at the link for the reflective line in PaddleDog’s post and it is good line. I have used it, and it will outlast some of the other stuff I have tried. It even says it is for perimeter line. So why not just get that rather than messing around with weird other stuff like parachute line? Which by the way will likely be a PITA to get the deck fittings.

The line on this kayak is 3 mm and the holes are 3 mm as well. On that link I cannot even see thickess being mentioned. The only thing I found so far in that size is a non-reflective 425 paracord (not the link I posted). @kfbrady mentioned that 5 mm is typical but I don’t see how I can feed that through those holes.

Celia is right, and it can even be simpler than that. Almost any good hardware store will have line that is perfectly well suited for what you need. You can hunt online and read specs 'till the cows come home, or you can drive to the store right now (if you live in a decent-sized town) and come home with line that will do the job and hold up well for years. And if it holds up for just 5 years instead of 8 or 10 (or whatever a top-of-the-line rope material would last), what have you really lost, in terms of value? Not much.

Just a hint: When it comes to threading line through openings that are hardly any bigger than the line itself, if that’s what you end up doing, you’ll need to melt the cut ends of the line with special care. One trick is to tightly tape each location on the line where you will make cuts. Otherwise, once you make the cut, even the tiny bit of unraveling which occurs immediately results in a diameter that’s way too big, so that when you melt the ends you get a hard blob on the end of the line that won’t begin to thread through the holes in your boat’s rigging. Go ahead and melt the end of the line while it’s still wrapped in tape, confined to its original size. Another trick is to “smear and spin” the melted material so that a tapered point is created. Still another trick is to “cut” the line with heat while spinning the line on opposite sides of the heat source to twirl the melted material into a point. This takes a bit of practice to do well. Setting up a candle or even a propane torch with a low flame works well (for persnickity work, I’ll I’ll even use a low setting on a very small oxy-acetyline torch, but that’s not equipment most people have on hand).

And yes, when it comes to knots, you can just use any basic applicable knots. If you are worried about knots coming undone (they shouldn’t, if you pick the right knots for what you want to do), you can wrap the tag end onto the main line with fine wire or tape. Function instead of prettiness!

I have done my share of rummaging through handrware store shelves, it’s not always that quick. Besides I already found a 3 mm paracord on Amazon…so that would be a modern version of going to a store.
Am I missing something? Isn’t threading a correctly sized cord easier than an incorrectly sized one?

It depends what you mean by “correctly sized”. The hints I provided were only meant to help if you end up using something that’s about as large a diameter as what will fit through the holes in your rigging.