Generally Speaking, a longer boat can be pushed faster due to having a faster “hull speed.”

How does a shorter (thus slower) boat, if all else are equal, compare when paddling slower than hull speed?

Specifically, is there a speed, or % of hullspeed that will require significantly more effort to paddle? I know at hullspeed the effort is exponential(ish).

How would a graph with Power Output on the Y-Axis, Knots on the X-Axis, and different lines for similar boats of different lengths (and thus hull speeds) look?
Would it look like either of these, or something different? 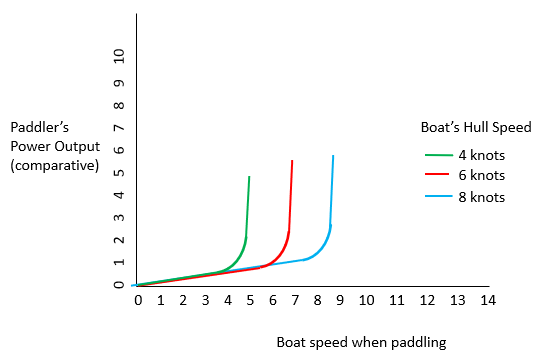 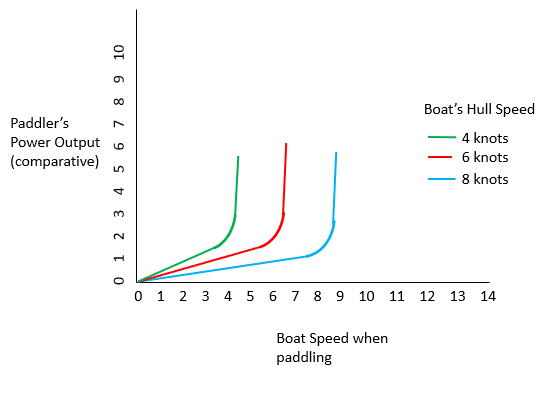 Your thought experiment is a bit oversimplified; where do you find different length hulls with the same prismatic coefficients (hull shape) and what about differences in width? My best guess would be at low effort a short hull would go faster than a long one.

Make friends with a naval architecture student (mine moved to Florida long ago) so you can test your boats in a tow basin: https://mhl.engin.umich.edu/facilities/basin/

You are probably right, it’s over simplified. And as an engineer and paddler, that tow basin kinda turns me on hahaha.
Why do you think shorter ones are faster at low efforts? And what’s low effort? Less than 2 knots? I’m guessing cuz it has less wetted surface area, which makes sense…but then at what point do longer kayaks become faster and why?

Here is a good article that looks at this question:

I’m curious how a 14’ Wilderness Survival Tsunami compares with the narrower 16.5’ Tempest at speeds of about 3 knots.

So if, as the article claims, 14ft is likely better or just as good for most people (who aren’t constantly training for races), why does everyone here claim you need 16’ boats for the ocean? Is it just cuz of weight capacity and assume the average weight of a paddler is borderline for a 12-14ft boat?

A longer boat in big water allows you to bridge the smaller waves, a shorter boat will tend to go up and down on them.

Fast boats are fast because of the efficiency of their design. They are easy to paddles at any speed, if you are capable of paddling them. Not many can hop into either my surfski or flatwater boat and get even one paddle stroke going.

To counteract that, most kayak companies build the short, fat boats with wide shoulders and hips. That concept plows through the water instead of cutting through it. Most will never understand what a fast kayak is like and I really don’t want to share the joy I find in going fast.

FSK gives you the ability to go where others can’t. Length does matter.

I can see that for areas where you need to travel 30miles to reach the next campsite or looking to cross a large chunk of water, or are worried about time for whatever reason (race, minimize how many days in the wilderness you are, etc). Good think to keep in mind. I haven’t heard of the classifications until i just Googled fsk. Interesting stuff.

Paddling resistance is primarily the sum of skin friction and wave-making resistance. There used to be technical articles published in Sea Kayaker that plotted both types of drag vs speed for commercial kayaks, but they were not measured values. Rather, they were the result of software - this can be good or bad, but the plots were not verified by experimental testing.

Re the two main components, skin friction is proportional to wetted surface area and velocity squared, i.e. it increases exponentially in a fairly predictable manner.

Wave-making resistance is less predictable since it is heavily based on details of hull shape, but it does increase with speed too. For a given displacement hull, wave-making resistance will increase rapidly over a range of speeds depending on its shape and length. The speed range is colloquially identified as the ‘hull speed’, although there is not a fixed point where the transition happens.

The transition happens at lower speeds for shorter hulls, i.e. longer hulls have higher ‘hull speed,’ which just means the transition happens at higher speed. At a given speed, wave-making resistance can be very high for a short hull, but significantly less for a hull that’s ‘long enough’ to still be operating below the transition point. In this case, the full resistance value will be less for the longer boat, which is the point of long skinny racing hulls.

At lower speeds, when a short and long hull are both operating well below the transition to high wave-making resistance, the shorter hull generally will have less total resistance because of its lesser wetted surface.

This is just my opinion, but I think for ‘normal’ paddlers at the 2.5 to 3 mph range, a 14 ft hull can be noticeably easier to paddle than a 17 ft hull. Not always, of course. This is the point of Brian Shultz’s article which is worth a read:
Choosing a skin-on-frame kayak - Cape Falcon Kayak (capefalconkayaks.com)

Having said all that, there are all sorts of reasons to opt for a longer hull, e.g. for choppy conditions, better tracking in the ocean, the ability to paddle fast when necessary, etc.

Sorry, this turned out to be pretty long-winded. I just now checked the Guillemot article, a much more complete explanation. I’m not sure I agree with the kinetic energy argument, but there are usually multiple ways to reason through fluid mechanic analyses - I’m definitely going to think about that.

My CD EXTREME / NOMAD is easy at any speed.

If you have the boat and ability to travel 30 miles in a day, then for a day trip on a body of water like the Chesapeake Bay where water access can be limited in some areas, you can explore places that many people can’t get to.

Wind and waves are he enemy of time and distance.

fun discussion. It would nice if there was a theoretical hull speed included in the specs of touring/sea kayaks. I realized it would be mostly theoretical, but as long as same method was used on all boats it would at least give us an idea of trade offs. I’d love to see some kind of measurement of how much faster the Stratos 14.5 is than the 12.5 or how does Stratos 14.5 compare speed wise to WS Tsunami 145 or how does same hull in roto molded plastic compare to ABS or composite. I still haven’t had the opportunity to experience a true touring kayak yet. Saving up my nickels while I enjoy my old Blackwater 12.5 on flat and my RPM on WW.

Funny you mention those 2 kayaks… I’m eyeing the tsunami 14.5 and Stratos 14.5 and wondering which is faster.
Reviews I’ve read hint at possibly the tsunami. Its wider but also means the stratos will sit lower and have additional plastic in the water, esp with its rocker.

If you get a chance to actually demo both boats, I’d love to hear a first hand account of someone that’s actually paddled both. None available for demos in my area. Especially right now. My guess was that Stratos would be faster due to being more narrow, but you make a good point about displacement of hull. I’d also love to know what other boats are considered comparable to these two in class and price.

I’m primarily on rivers and small lakes. I’d love to have a higher performance boat to cover some miles, but I also don’t want it to be so long that it’s difficult to get back into narrow creeks. One long boat buddy of mine told me to go long and just learn to paddle backwards, lol.

Ah nice. I’m near the coast but want to use it for everything. Mostly lakes and slow rivers, but able to shoot some cl II+ rapids on occasion as well as island hop off the coast. I may end up just getting a sea kayak and a rec lake+river generalist…but for every boat i get for myself, i also need to get one for the wife.

I’m still a WW newby but based on what I’ve learned in both my rec boat and my WW boat the hull design of Stratos is going to be more forgiving and fun in current. The defined keel of WS that makes it track so well can catch a current or rock and cause a surprise tip.

I have an Epic V5, 14 foot, and an Epic V7 17 foot. The V7 gets to speed easier, glides better, and is faster than the V5 with approximatly the same effort. This is personal observation. Also one of my paddling buddies has a V5 and we have done side by side comparisons. After one member of our group got a V7 and started leaving us in the dust is when I started thinking about geting one. I’ve had ten boats, that V7 is by far my favorite.

How fast are they?