Knots for tying a kayak paddle on car roof rack

What are the best knots for tying a one-piece kayak paddle on car roof racks, secure while easy to untie? 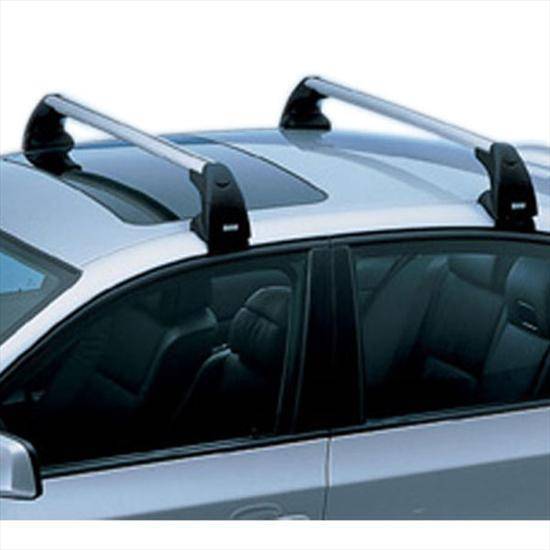 Maybe a transom knot? If it’s difficult to untie, try slipping one end of it so that you just pull the end to release.

If that doesn’t work, probably some sort of square lashing.

Also, stick something like rubber between the paddle and the rack. This will protect each of them from the other rubbing, plus it will provide friction to prevent it sliding fore and aft.

I agree on the square lashing. Quick, easy, super-secure. As to something to use for rubber padding, one idea that pops into my head (because I use this material for all sorts of things) is rubber from an inner tube. Just buy a small inner tube, like for the tire of a small trailer, wheelbarrow or garden tractor and cut out pieces of appropriate size. You could even tie (using small lengths of steel wire twisted to tighten, would be best) a patch of it to each spot on your roof rack so you don’t have to mess around with it every time.

If it’s a Greenland paddle, have you considered a length of PVC sewer pipe? That’s how my Lumpy arrived; Bill noted it makes an excellent transport case on a rack as it’s secure and protects the paddle. I carry my paddles inside my car, but kept the pipe as a backup plan.

I will try the square lashing, and see how it goes. For PVC sewer pipe, it needs to stay there even when not paddling, if I understand you correctly. I’d prefer using only ropes, so that my car roof rack will not carry anything when not paddling.

If you’re going the pipe route, check out my ultra-simple implementation. It has survived the winter but the tape does show some initial signs of weathering. I might have to replace the tape, or just get a two-piece paddle…

@Jie said:
I will try the square lashing, and see how it goes. For PVC sewer pipe, it needs to stay there even when not paddling, if I understand you correctly. I’d prefer using only ropes, so that my car roof rack will not carry anything when not paddling.

No, there’s no need to keep the pipe on the rack when not paddling. You could use short ratchet straps and not worry about over-tightening as the PVC is quite tough. Any type of enclosure will offer some protection to the paddle.

Thanks all for your recommendations. One thing I have been trying to do is to minimize and simplify my kayaking accessories. So, I am trying simple rope first. I bought a 9/64" Venetian cord from Ace Hardware, and used the square lashing knot. It seems working pretty well. See attached picture. I will keep trying for a week or two whenever kayaking. If it works without issues, I will stick to it permanently. But if not, I will come back to the pipe idea. 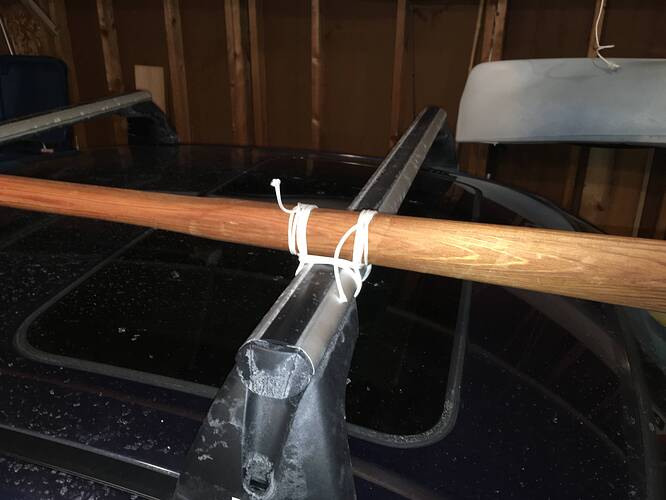 Went kayaking this afternoon. Tested the square lashing knot in real situation, and it worked pretty well. I like it. 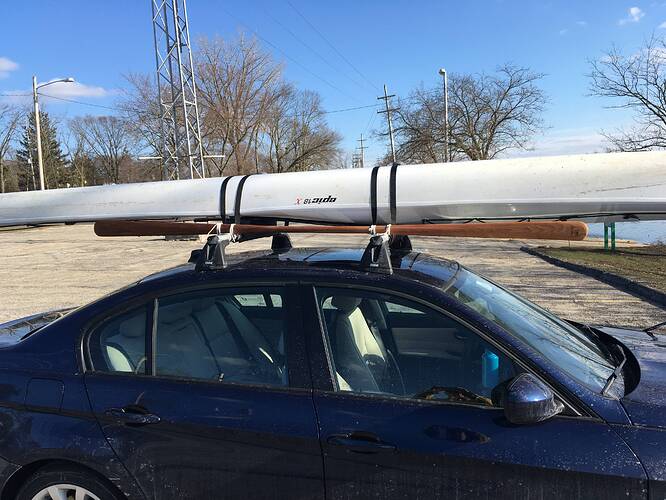 Sounds great. As long as your method for securing each end of the rope (the “beginning and end ends” is fun to say) is secure, the square lashing cannot possibly let you down.

I checked the two knots at the end the trip (not long though), and they were still very solid.

This may not be useful, since you are trying to cut down on accessories, but the West Marine Outlet has the Yakima Multimounts on sale for $27 (and they were $17 about a week ago, and Yakima Evenkeel saddles were were about $25 for four saddles + straps). You would need to change the snap-arounds to fit your bars.

A ski bag from the thrift store might be useful for keeping the bugs off the paddles, but you’ll have to tie down the loose end of the bag to keep it from flapping all over the damn place as you drive.

A clove hitch is often used when tension will be applied to BOTH ends of the line in opposite directions thereby securing the line from being pulled from either end - not just one. This knot is basically a clove hitch with the end tucked under the “X” as shown.

@“Ted of Martinez” Good to know the info and tips. As for cutting down accessories, I’m also thinking about replacing my bow stern tie-downs and pulley ratchets. For example, I want to try just ropes and using the trucker’s hitch, which is kind of off topic.

@Wavetamer I did apply the clove hitch to both ends.

6 inch tarp ball bungees from Home Depot works for me to tie down my canoe pole. 1 on each crossbar works, but can use 2 for insurance. Easy on, easy off.

Should work well for kayak paddle too. Thanks. As a matter of fact, I looked for some bungee cords, but didn’t find proper ones. For me, I’d like to keep doing the square lashing, which is fun to me. Tying knots makes me feel a good kayaker too. But I believe ball bungees is also a good option, very easy.

Degradation is something to remember, but it’s hardly a huge or constant worry in this particular case. Though the overall tension created by the square lashing can be enormous (it’s easy to create a square lashing that exerts truly crushing force since the effect of every initial wrap is additive and the effect of each of the first few final wraps is actually multiplicative), the actual tension within any particular segment of the line is extremely small - only as great as you applied when wrapping it. The actual line tension is probably less than 20 pounds unless one puts unusual effort into the process and it could easily be less than 10. Compared to the working load rating of the rope, that won’t be significant unless you are using household string or something similar. In some applications the tension could become greater later on due to stress exerted on the lashing itself, but not in a situation like this where it’s been recognized that ball-bungies exert enough force to keep your paddle on the rack (ball-bungies exert far less squeezing force than you can apply with a light grip of your own hand - not much at all). The force exerted against your square lashing will be the same as that exerted against a ball-bungie, but carried by a dozen or so wraps of line, so it’s clear enough that the line within your square lashings is under practically zero stress in this case, certainly no greater than that applied during the wrapping process.

That explanation was probably over-kill, but I do like it when the the simplest use of common sense can show whether a concept is correct or not.

I’ve had severely degraded ropes fail before, but ONLY when the load was applied with a hand winch when considerable cranking effort was required, and that was with a tremendously degraded 3/8-inch rope (years in the sun every day and visibly in poor shape) which was of mediocre quality in the first place! Now, I’m not advocating that one throw caution to the winds, and yes, it is smart to keep ropes in good shape, especially those which might carry the wind loads of a car-topped boat. But a rope that holds your paddle to the rack? If the line looks in decent shape, don’t sweat it!