There were 7 originally to go for the 3 days. It turned out 3 of us did all 3 days. One of us an over night and 2 joined us for a day with one showing up Saturday and the other Sunday. I did 34 miles with 15 of those on Saturday. The nights were in the high sixties, and the days partly cloudy often with a breeze with the highs in the low eighties. Great weather for sleeping in my hammock. It didn’t rain until I pulled into the driveway at home Sunday.

The lake is in the foothills of the southern Appalachian mountains, and is always about the coolest location for summer paddling in SC. Lots of powerboats on Saturday, but not so much on Sunday. You can get some fun rough conditions from multiple power boat wakes coming together where you are paddling. We paddled the two miles across the main pool and up the Toxaway arm of the lake. We camped at one of the Foothills Trail campsites not far from the trail’s suspension bridge. Wonderful sounds of running water and the summer insect chorus to put you asleep.

I am posting photos with captions so you can paddle along. 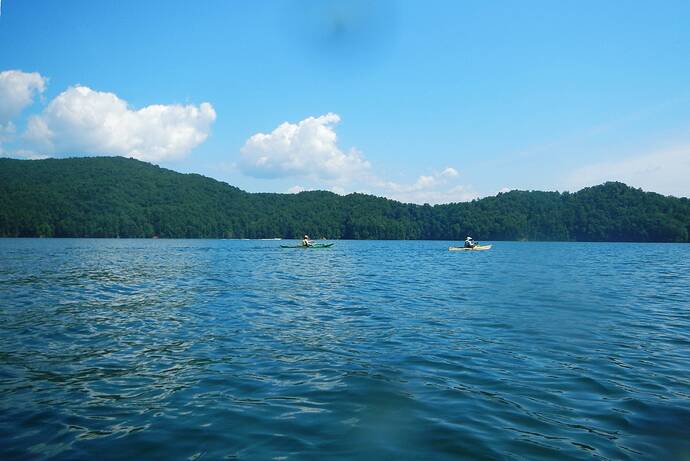 Take out to camp site. 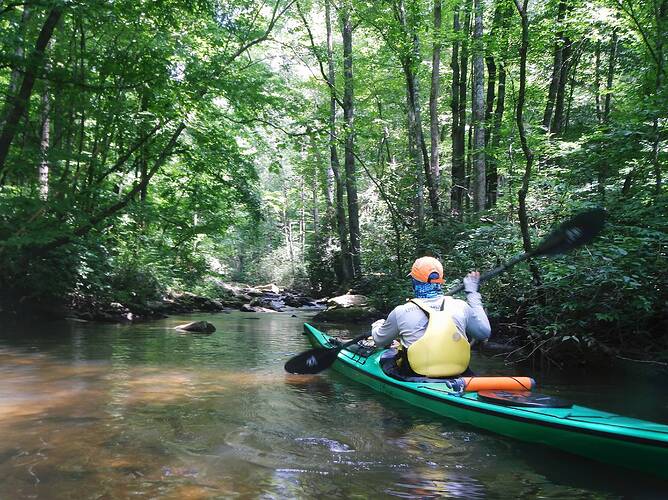 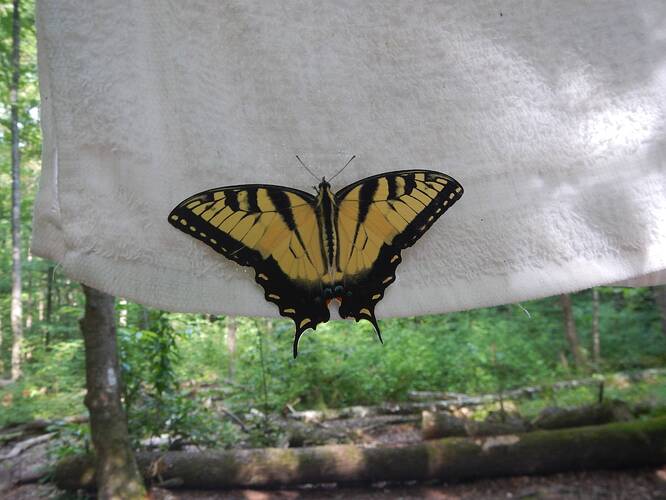 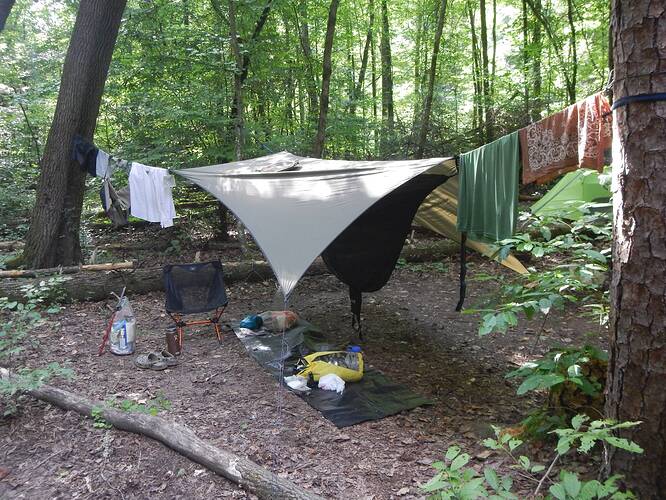 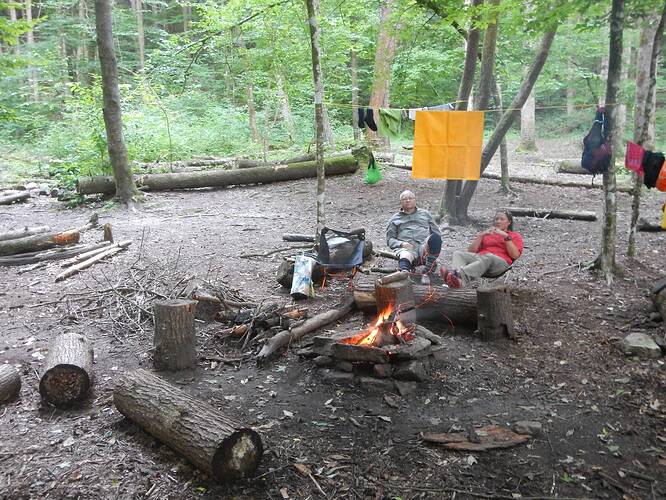 Saturday morning paddling back down the lake to meet Katie and Ole. 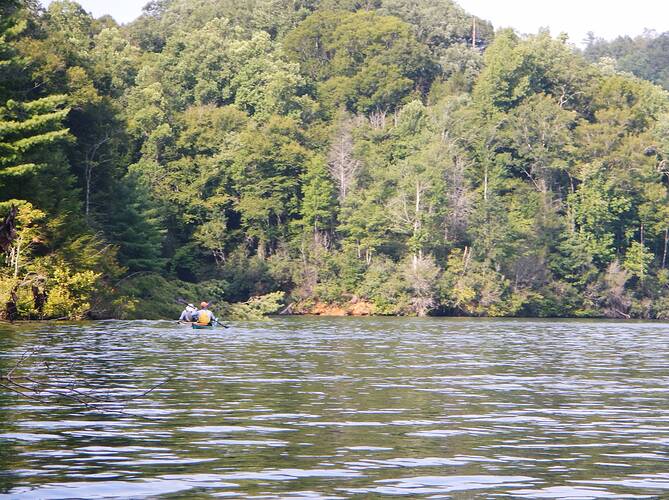 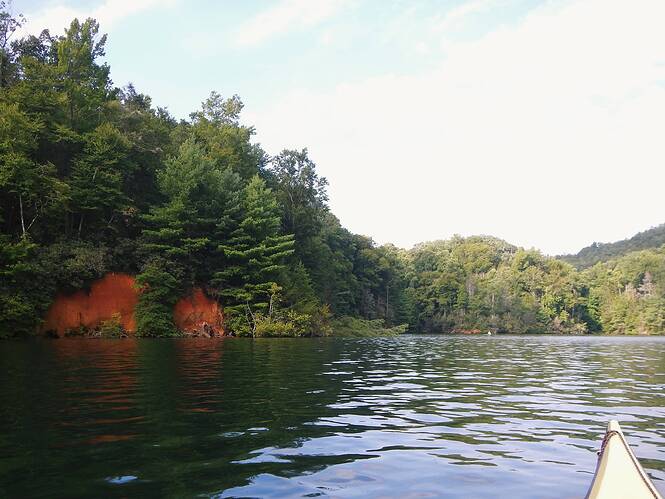 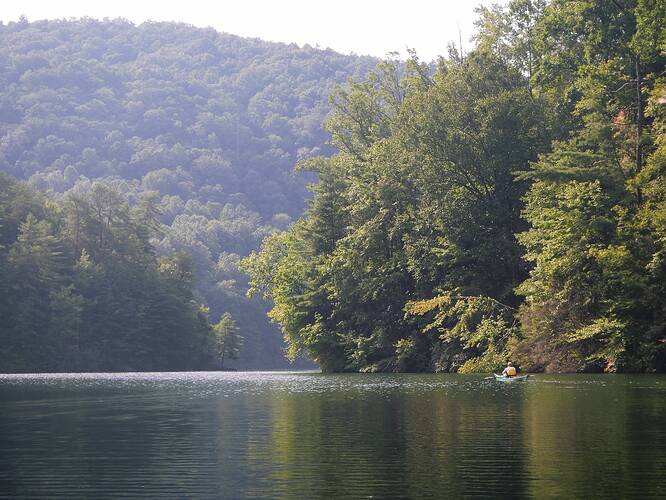 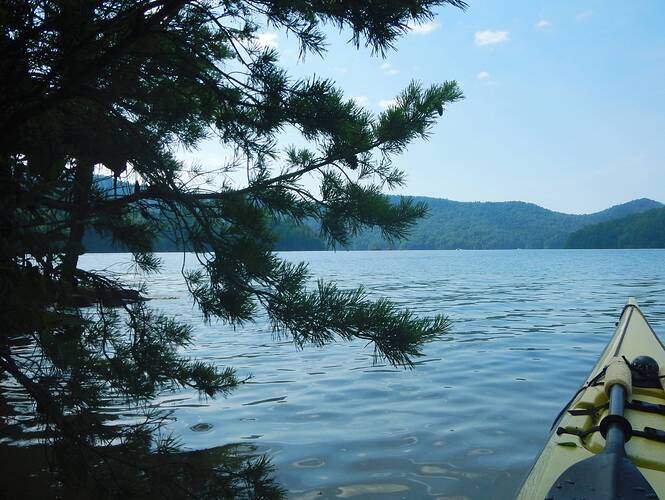 I call the end of this cove the Rhododendron Tunnel. 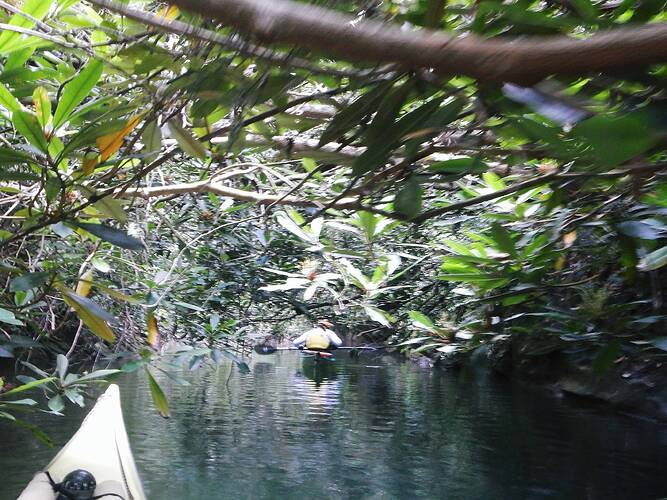 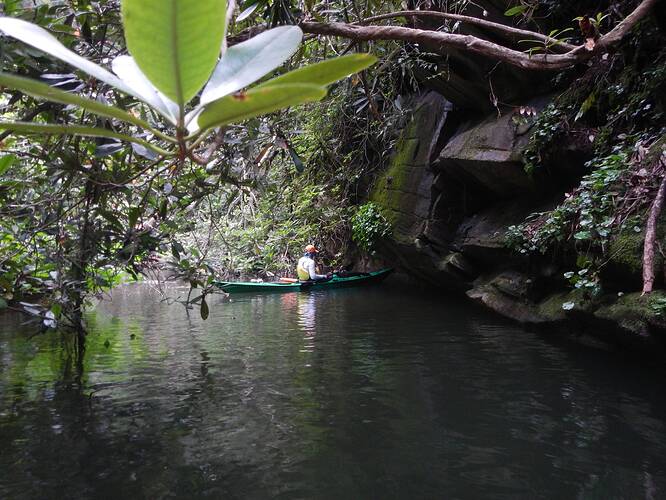 It keeps going back under a rock shelf. 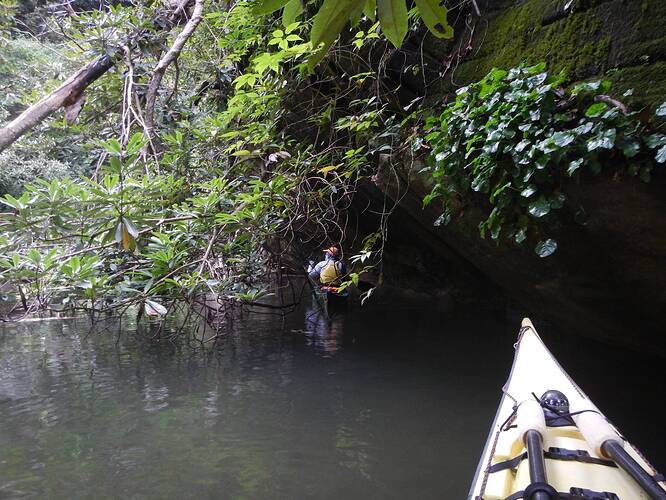 It ends at a small cascade. 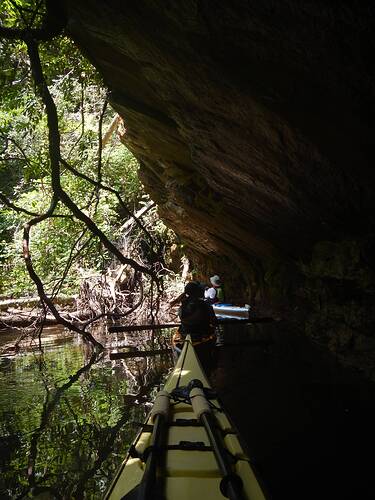 Well the light at the end of the tunnel heading back out. 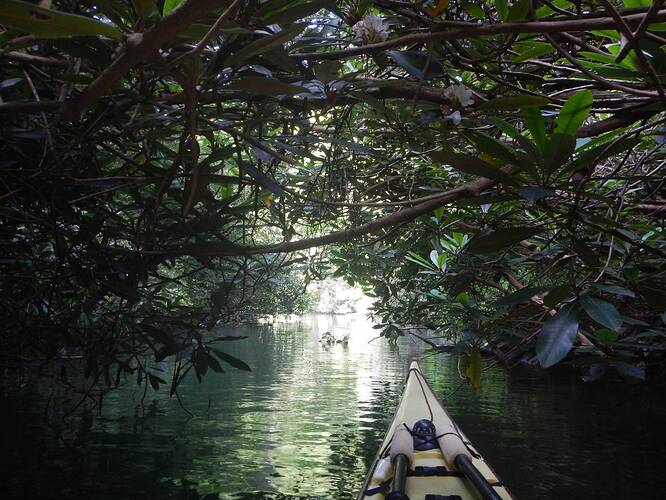 A cascade of smiles at Mill Creek Falls. 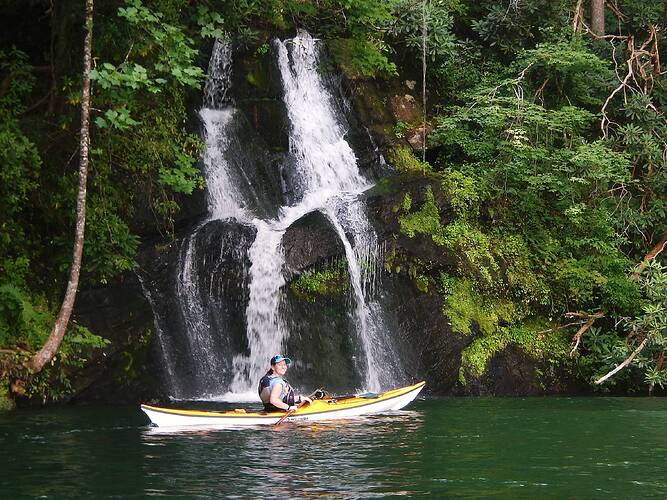 The bridge over Horse Pasture River where we eat lunch. 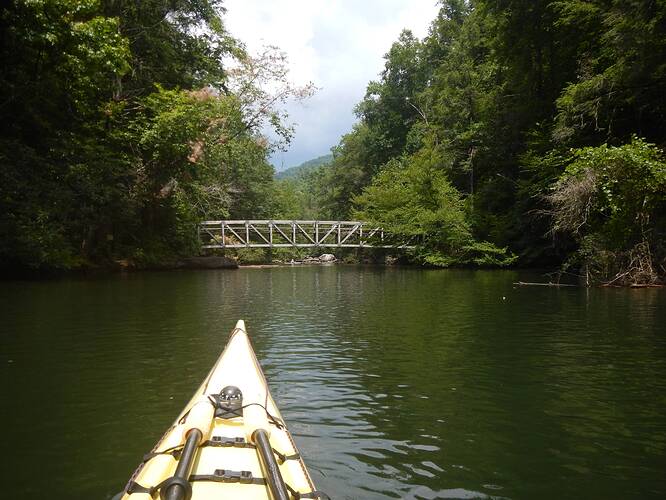 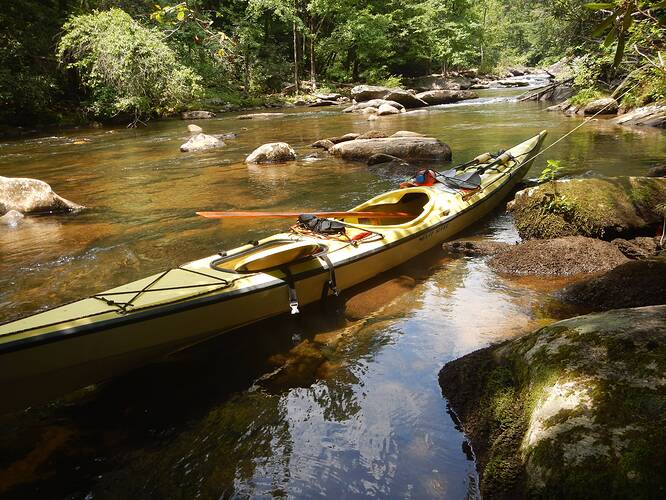 We try to keep it all in balance. 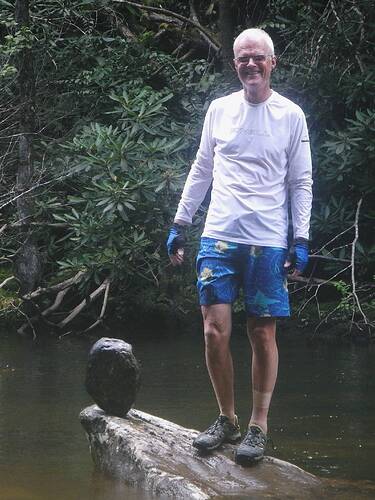 Caught the Group photo in progress. 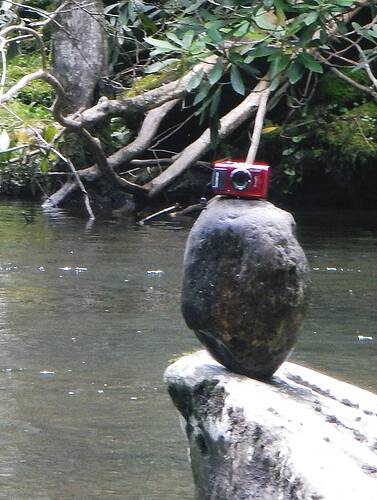 Sunday we paddled from the Foothill Trail bridge over the Toxaway back to the west ramp. 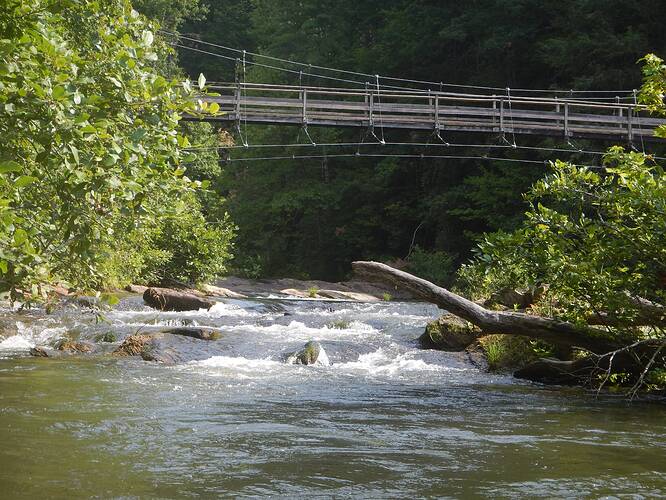 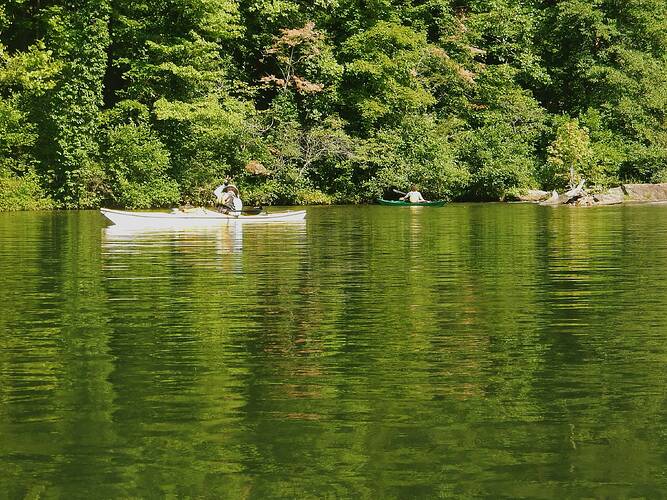 A proud boat builder in his homemade yawl with a balanced lug main sail. the west ramp is in the background. 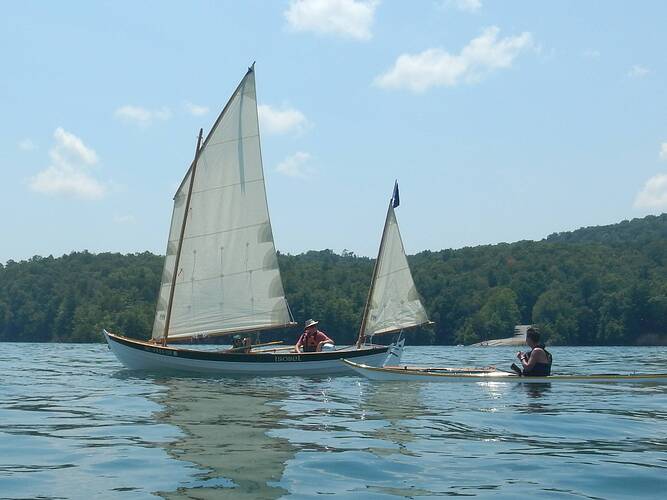 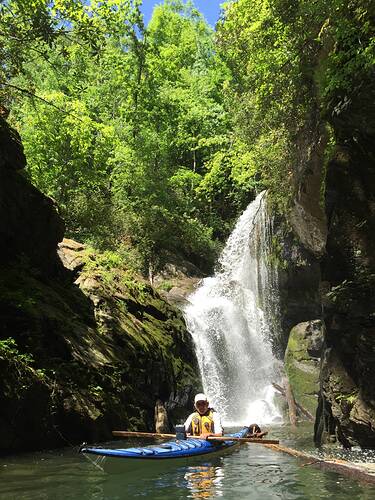 That is a nice lake !
Many moons ago, String organized a weekend camping/paddling trip there and a big gang would showed up.
After paddling all day we had a covered dish dinner and there was enough to feed an army.
The nicest paddle on the lake was going behind a water fall.
A good time was had by all and many of the paddlers got to try different boats out

Great photos - that rhodie tunnel has to be spectacular when they’re in bloom. What’s the area in the photo that looks like it’s on fire?

@Rex said:
I’ve been there!

Yes that is Laurel Falls two of the group paddled there this trip. I have been there too. 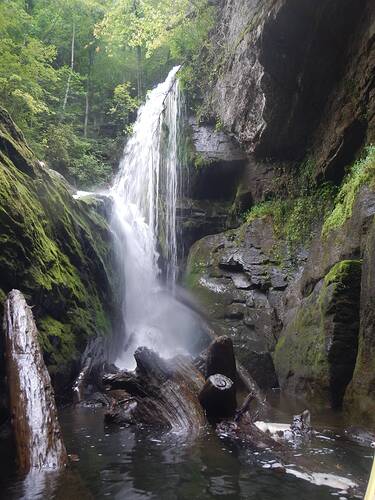 @JackL said:
That is a nice lake !
The nicest paddle on the lake was going behind a water fall.

My favorite too! Wright Creek Falls also has a little cave off to the side. 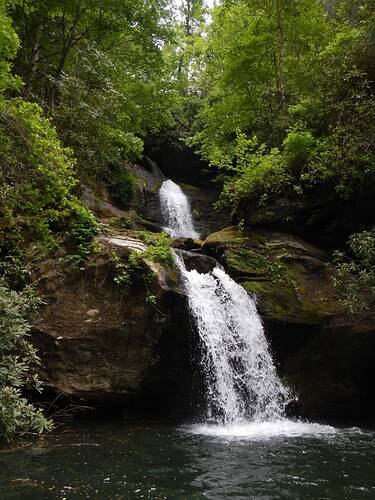 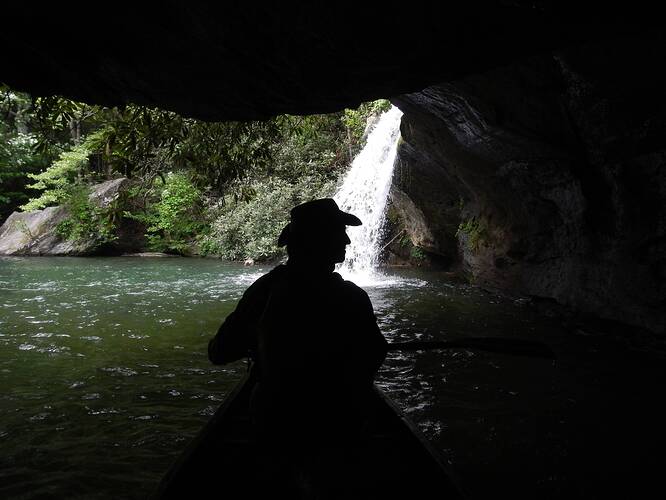 @Rookie said:
Great photos - that rhodie tunnel has to be spectacular when they’re in bloom.

What’s the area in the photo that looks like it’s on fire?
I’m not sure which photo you mean. there is a campfire in one. Then that red bank is Carolina red clay, if that is the one you are asking about.

If you look in the branches above the kayak in the photo leaving the tunnel you will see a few late blooms. this little gorge is shaded most of the day and the micro climate stays cooler. The lake has a wonderful rhodie bloom earlier in the summer. Here is a shot at Wright Creek Falls from a few years back. 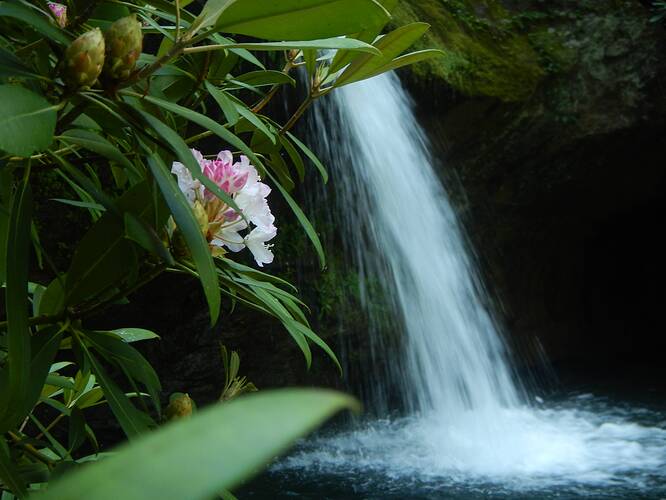 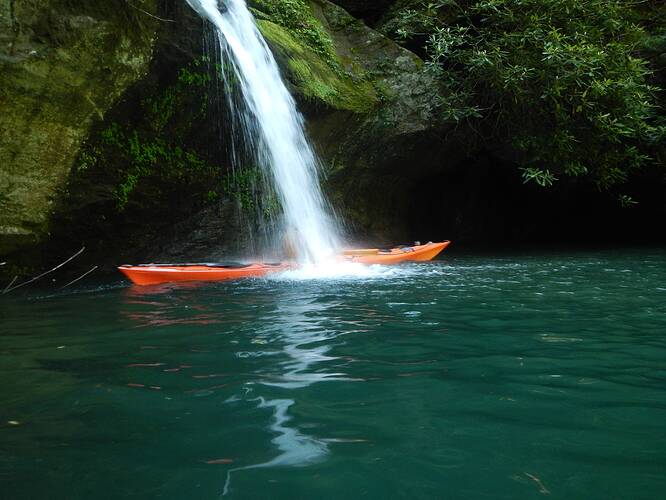 Yes, the photo with all the red on the left. Red clay - wow. A beautiful area.

Wish I could have been there.

You had me sign up for a race there. I had not been to Jocassee before that. Wish you were there too. Thanks for introducing me to Jocassee!

@castoff said:
You had me sign up for a race there. I had not been to Jocassee before that. Wish you were there too. Thanks for introducing me to Jocassee!

There went the neighborhood!

One of the best lakes in the country. Loved all the pictures. Thanks for posting.

Very, very nice… Thanks for sharing!

I don’t think I’ve seen Jocassee with the water so high! I’ve got to go back!