I know someone who has interesting ideas. His build is a wooden kayak with a very unorthodox layup for his custom wood kayak. From the outside to the inside here goes:

This is an odd layup. The boat weighs 150lbs without the outrigger, >180lbs all told. Any facts, figures or criticisms about the above layup which adds Kevlar and awlgrip to the outside and carbon fiber inside the inner layer of fiberglass. Seems unusual, any suggestions?

What size motor is he using on it?..

I am not kidding when he built this telling me with a straight face it was meant to be paddled like a Kayak. This is not a joke, repeat, not a joke. I tried it and it didn’t handle too well.

But any comments regarding use of Kevlar on the outside with awlgrip finish and then using CF on the inner layers next to the wood?

I’m puzzled why he left off a nice layer of ferro cement on the underside of the hull.

I am not kidding he also put a sort of double deck with voids below. Since it was designed to carry a huge amount of weight (excess of 1,000lbs) by his design, the handling would be suboptimal with one or two people inside so he turned the front void into a bilge that was supposed to take on extra water in order to load the boat more. He installed a pump that ran on some kind of rechargeable battery. So no need for ferro cement.

Seriously does the hull itself give any advantage that simple fiberglass over the wood would not?

If it has an outrigger its status as a kayak is dubious.

One or two people “inside” ? Has a bilge to take on added water to increase load. Naw, its not a kayak.

Kevlar on the outside? Protected by just paint…
This must be some sort of experiment by a hobbyist with too much time and money.
But… we would LOVE a picture!

Sounds like someone who wants to spend time in the shop to avoid the family.

In order to float a half ton, you have to displace just a smidge over 16 cubic feet.
Just how big is this “kayak”?

It seems like a poor idea to have Kevlar as the outer layer with no additional protection.

As soon as the kevlar is scrapped, it will fuzz up, which is very difficult to repair, since kevlar fuzz cannot be sanded.

Since Carbon and Glass can be sanded, when you get a scratch or gouge, they are much, much easier to blend back in or patch. Also, kevlar is poor under compression, which the outside of the hull will be exposed to during impacts.

Ignoring the other follies of this layup method, I’d say the unprotected kevlar/fuzz/patching issue + its poor strength under compression loads translate into a poor choice of layering.

Well here it is, all 25 feet of it. Took 2 hours to install the outriggers and 2 hours to take apart. It’s all connected by a bunch of little screws and aluminum fittings which bend and break and move with the current. But even when the outrigger was 90’ and not moving I had a hard time getting it going. Freeboard seems very high, and you’re high up due to the voids so it felt really hard to paddle and get going. Couldn’t turn it at all. Couldn’t go much forward or backwards. Needed a motorboat to get brought back to shore after fighting with it for over a hour. Seems like more a yacht that looks like a kayak to me. 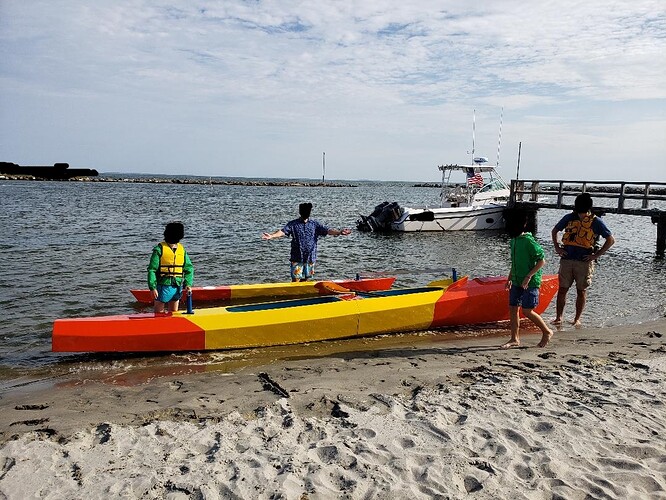 Yeah, that is not a kayak. It is a personal project of dubious results.

Looks like some sort of Proa, the Polynesian outrigger of yore.

A dozen or so years ago several companies came out with all carbon boats. They failed due to micro-cracking of the carbon fibers. Then the layed boats up with a layer of carbon inside of a layer of aramid (Kevlar) cloth. That gave the rigidity of carbon and the toughness of the aramid.

Not long after that some brainiac made a mixed weave of carbon and aramid. That allowed a one layer boat that was both rigid and tough.

I can’t say much about your friend’s project. I remember when Necky came up with a new racing boat, also about a dozen years ago. It was a carbon thing that looked great, but weighed some 60 pounds. The racers they were trying to impress all laughed.

“Yeah, that is not a kayak. It is a personal project of dubious results.”

That was my conclusion exactly. I think the builder knew enough to get it done but had no experience with paddling. A little knowledge is a dangerous thing, it’s not what you don’t know, it’s what you think you know that ain’t so.

As I inquire as to what the accepted industry practices and standards are the divergence between the two strongly implies that this project was done on the basis of assumptions that were never cross checked with what is known to work.

That appears to be an overbuilt partially decked outrigger canoe. Looks like you’d need to cut off the outrigger so you could “edge” and only paddle with no less than two paddlers.

Squared stern looks like motor should be there. The lack of bow rocker did not help the handling of the boat. Move the stern seat back to the green shirt persons right hand to help steering and allow for another paddlers.

I’m not quite sure if the cockpit is big enough for enough paddlers for that cross ocean trip the thing seems to have in mind!

Why? Just what is he planning on running into?

Supposedly the idea was to make the boat useable on rocky shorelines so you can drag it and minimize the damage.