I took about a ten year complete break from paddling, so I kind of forgot what paddles I had. Now that I’m starting back into it, I went through my paddle collection the other day. Turns out I have eleven paddles and I have one in the mail, so I’ll have an even dozen. Probably the most expensive is a bent shaft, carbon fiber, Werner kayak touring paddle. I also have three bent shaft ZRE carbon fiber canoe paddles. I only had one really pretty wood canoe paddle and I made the mistake of letting someone else use it on a Boundary Waters trip. It’s pretty beat up now.
Let’s see your paddle collection or the one or two paddles you really like.
I’ll try and get a group shot of my paddles soon.

Be back in a week or two when I find them all.

I don’t have any pics of just paddles, but my 205cm Lendal Cadence is my most used paddle. 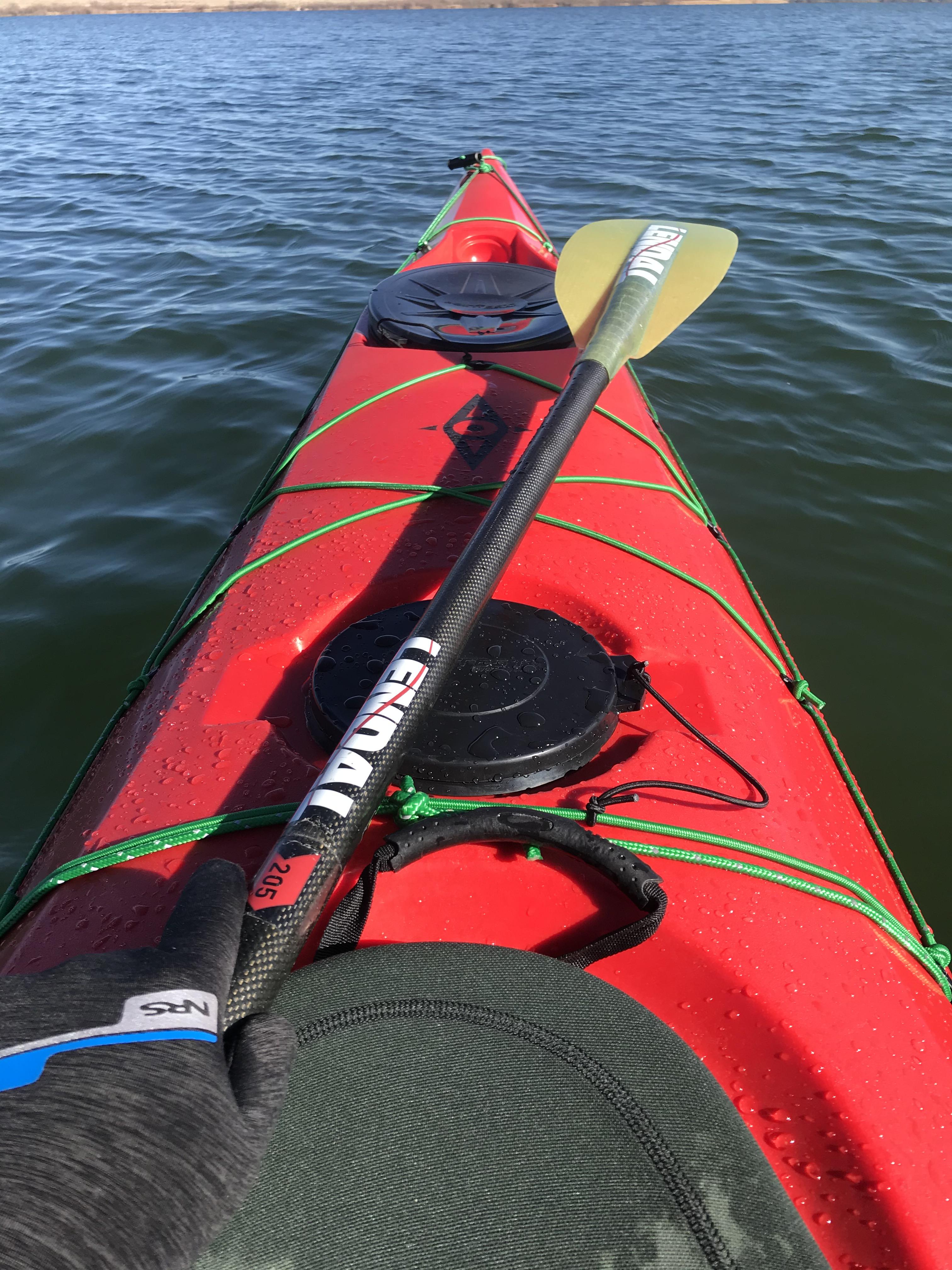 I’d forgotten about Lendal. I should check out what they have.

Excellent stuff. Be sure to hit up Marshall at The River Connection for Lendal Paddles. Even give him a call o talk through the options and what might be the best fit.

some of my Greenland style paddles. I don’t have a picture of all of my Euro Kayak paddles or of my canoe paddles. This one picture will have to do. It is a pain to get them all out for a paddle picture. 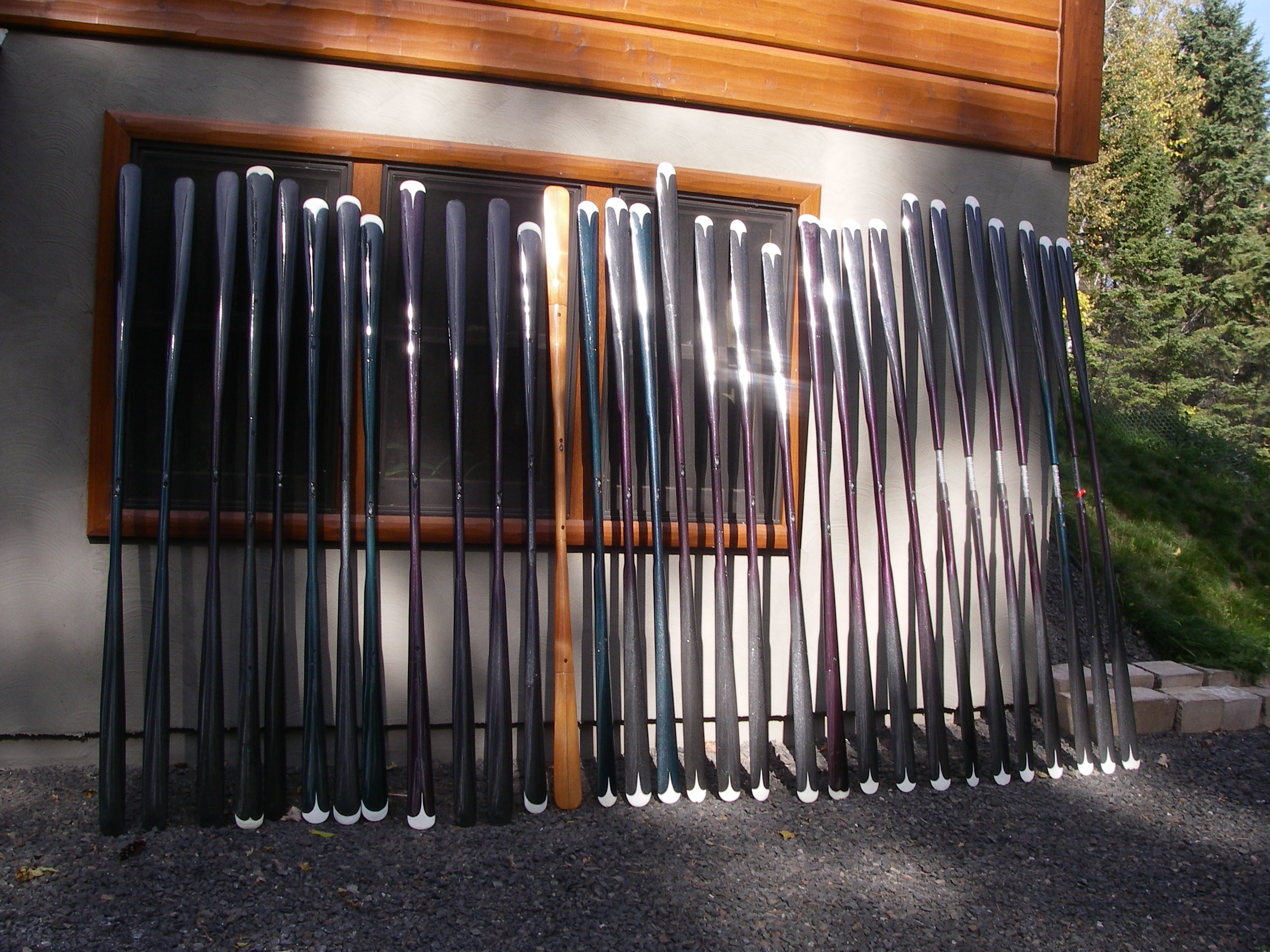 So what I’ve posted are photos previously taken of some of them, and a trio of “special paddles”; the Lutras and the Blackburn. 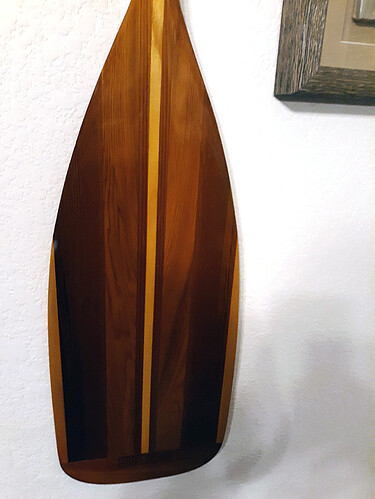 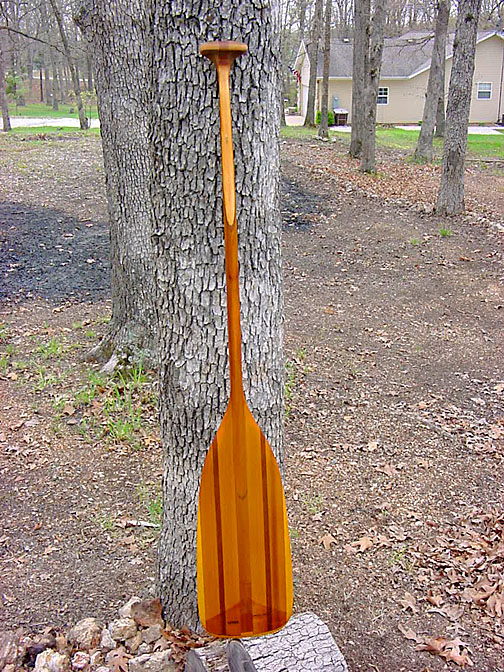 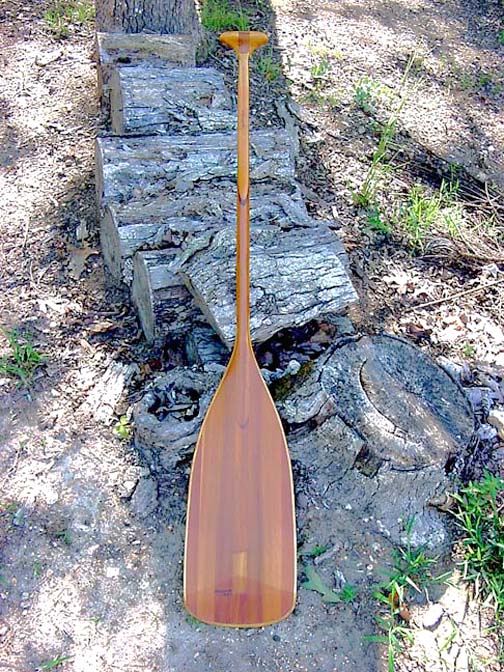 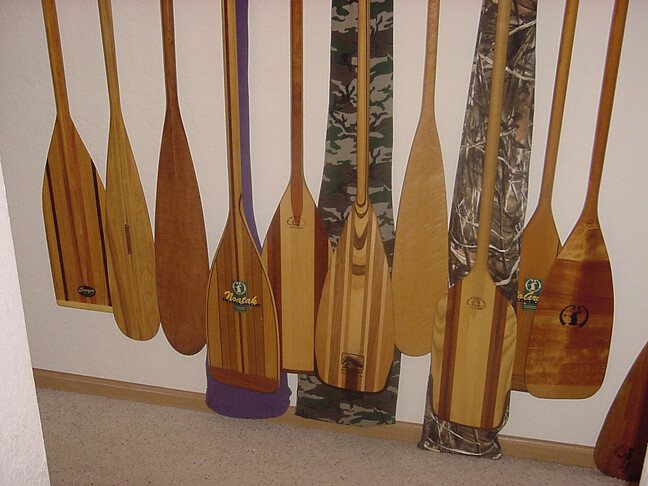 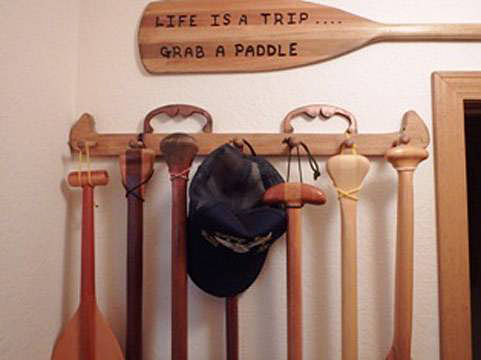 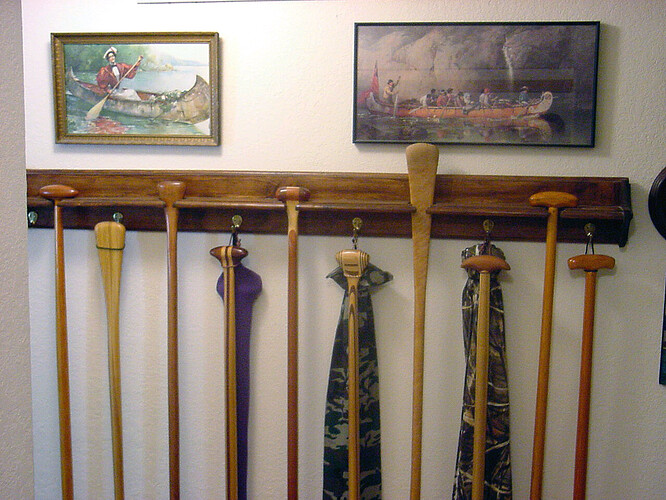 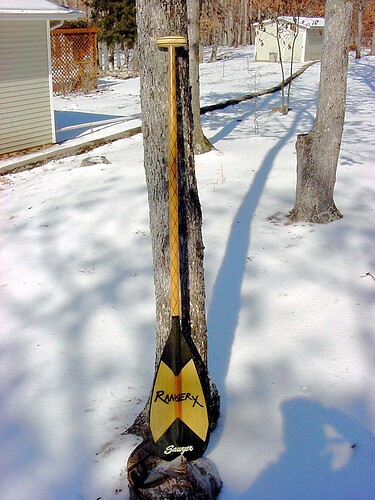 Yeah! I know!
I’ve got a problem…with paddles “and” canoes.
However, I have no issues with my family, marriage, finances, drugs, or alcohol.

I would think so. I’m not sure where I’m even going to line up the few I have.

I really like carbon fiber, but there is no denying wood is way more beautiful. Feels good in the hand too.

What do you value your Lutra’s? I only ask 'cause I was blessed to buy one from a former poster here… Tony fig…Many years AGO, I was vacationing in the Finger Lakes region of New York and had some interactions with Tony. He said to stop by and I did and he took me to Dave Curtis’s Hemlock Canoe shop and we (I) got the tour…I am a yaker at heart but branched out into nice canoes and wanted a pretty nice paddle… I
was a little amazed how much great paddles sell for. At the time I was paddling a Sawwer Autum Mist with a $60.00 paddle and didn’t want to spend $220.00 for the ones Dave had… we went back to his house and he offered me a 5 degree bent shaft Lutra paddle for $100. I had no knowledge about how SOUGHT AFTER these blades are. I pretty much use Zavs now…

I don’t have any pictures but this thread motivates me to take some just to have on hand for insurance purposes.

I’m not going to pull them all out for a group photo but here are a few. 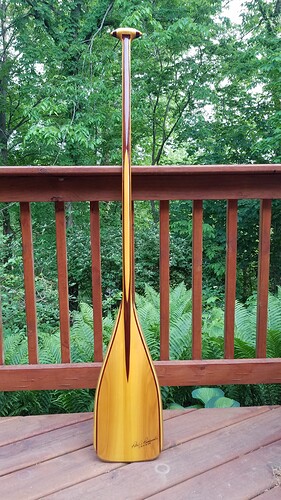 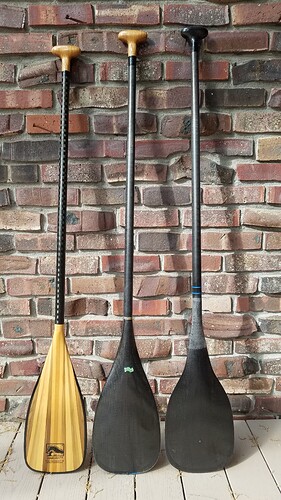 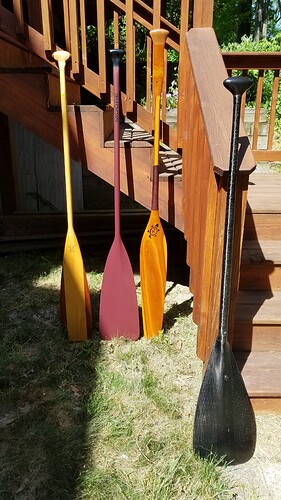 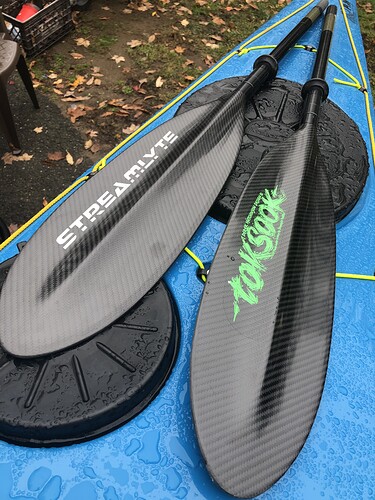 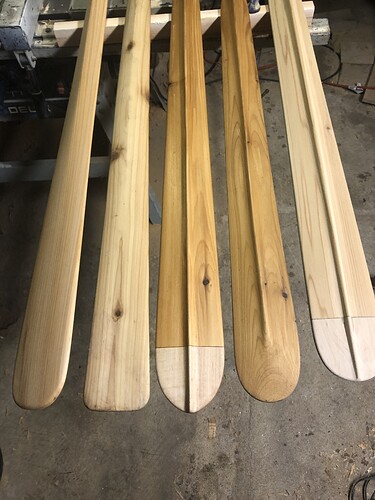 I would say that the cost of a Lutra depends on a whole list of variables; 3 of which are condition, location of the paddle, and whether or not the owner is staying with, or leaving canoeing.

I bought a very nice canoe (near mint condition) from a paddler in Wisconsin. Asked him what he’d throw in a Lutra he had for? He said 100 bucks; my retort was Sold ! Later he contacted me, and said he had another Lutra he was thinking about keeping, but he was getting out of paddling, and he’d sell it for another hundred bucks plus shipping. My retort again was; Sold!

I was lucky. I didn’t have to pay for shipping the second Lutra, or canoe. A friend brought them to Missouri, where I live, from Wisconsin. No charge. I gave him some profuse thanks, gas & meal money if I remember correctly.

If you find one in primo condition, and you pay less than 150 bucks, it is my personal opinion that you got a killer deal. Some might say that getting one for under 150…you stole it! Some may even go up to 200 or 250 bucks for a really nice one. At that price, I’d take a raincheck, and contact him later, and ask if he still had it? If he says yes, but won’t go down on price, I might try again. After that, I’d quit aggravating him/her.

Nice condition Lutras are hard to find.
They aren’t Old Town, assembly line, starter paddles!!!
What do those cost not???

I still have the canoe too!

P.S. If you find a Lutra, and don’t like it; email me!
If in primo condition, and price is right; I’d likely say Sold! again…

I’ve been wanting an otter tail. 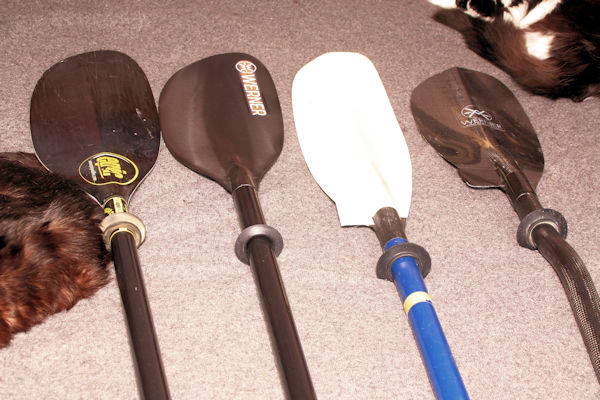 The two canoe paddles on the right are bent shaft. I actually have three ZRE, but they all look pretty much the same. And I have a couple Carlisle, but who wants to see Carlisle?
The cat’s don’t paddle.

I love my Storm. Definitely get with Marshall. 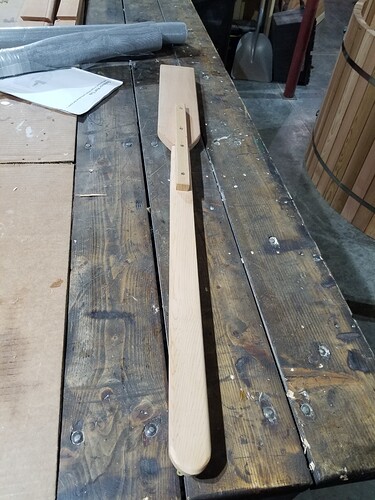 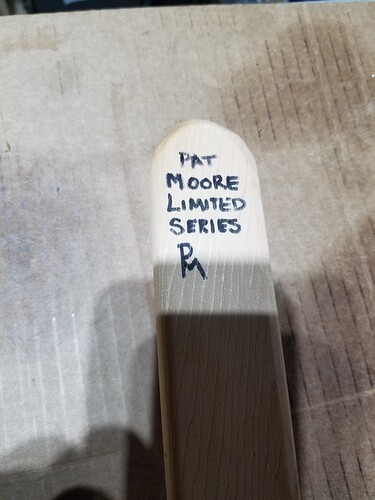 It’s not for sale I know what I got !

You most definitely have a sense of humor.
Almost spit out the brat I was eating.

I don’t have a Pat Moore paddle, but it is not from a lack of searching. I’d have to pass on your version however.

That was funny!
BOB

I actually do have one . I’m on the road right now so I dont have a pic. The one I posted was a joke to a friend of mine who was friends with pat. He sold me the paddle… which is loved and appreciated.