I’m a small frame 5’4 130lb intermediate paddler looking for a versatile all season sit in kayak that can accommodate a 55lb dog. I live in the Pacific Northwest and like to kayak in large choppy lakes, the Puget Sound and along the coast.

I am having trouble finding a solo sit-in kayak big enough to bring my dog along. I’ve looked into purchasing a tandem kayak but I have trouble steering/handling it alone from the rear seat.

Any advice or suggestions would be greatly appreciated!

I could be wrong, but that sounds like a lot of competing design requirements for one boat. A sit-in to accommodate both you and your dog would likely need a large cockpit opening, which is not good for choppy lakes/Puget Sound/coastal kayaking.

Get a tandem canoe, take the seats out, put a kayak seat in the floor in the center, get a longer paddle, call dog and paddle away

An Eddyline Sandpiper or Sandpiper 130, or a WS Pungo, would all fit with you and the dog. I am not making any recommendations for your paddling location/conditions, just for carrying the dog. My husband paddles with our dog, but we don’t take her out on bigger water, just smaller lakes, rivers and streams.

Well, that depends upon what you can find…i will show some of Qursiers solution with the retrievers… 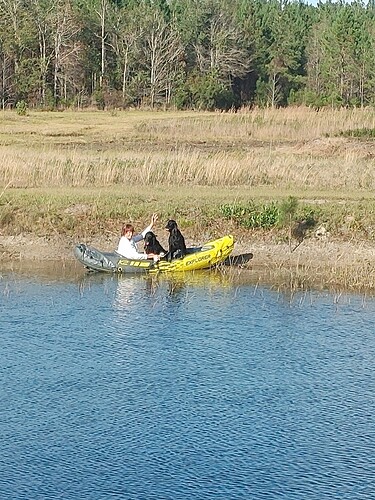 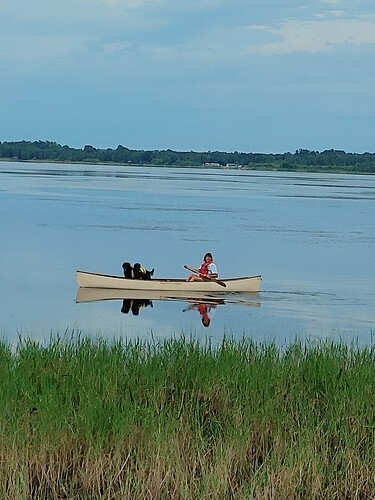 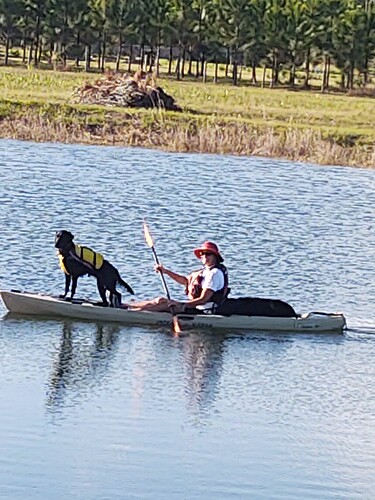 I’d think with a 55lb dog a SOT would be preferable. With a SInK, the dog will be in your lap making it hard to paddle, whereas your dog can sit further forward or behind you in a SOT.

IMO nope for sit in with a dog for "large choppy lakes, the Puget Sound and along the coast. "

SOT for salty stuff, better yet take the dog in something like a canoe in quieter waters and stay at home for Puget Sound.

Think about what you would do with the 55 pound dog, yourself and a capsized kayak in the about 59 degree water a half mile offshore in Puget Sound. The equation does not work for a SINK, might for a SOT with favorable conditions. Skeptical on that too but it is the only possible path I see.

Maybe something like this (mated with a rudder) would work for you.
https://oldtowncanoe.johnsonoutdoors.com/kayaks/tandem/dirigo-tandem-plus?jo-page=2

Canoe is your best bet for bringing dogs.

I have seen people with that boat on ocean water. The thing was nearly capsized, water coming over the coaming, with nothing foot and a half chop.

Have also done a rescue session with two adults trying to get back into that boat. Luckily it was warm water on a small pond. Couldn’t do it.

If you haven’t been paddling with the dog yet, go some place where you can rent first to make sure the dog is amenable to this. Not all are. A 55 pound dog that is nervous on the water could cause you serious troubles. Best to find this out on a $40 rental situation in a protected area rather than a $1000+ purchase.

Going bask to basics, you may want to read an article available online at California Kayaker Magazine - South West's source for paddlesports information (Issue #10, page 6 of PDF version) - the article on basic types of kayaks. Talks about categories (such as recreational, sea kayak, sit on top, etc.), along with short summary of pros and cons.

Match that with a page borrowed from the Basic Illustrated Sea Kayaking book that talks about the ACA level categorization of flat water and what type of kayak would be appropriate.

Puget Sound is regularly Level III-IV water, so really should only be paddle in a sit on top or sea kayak. Except for wind, Lake Union would be level II at most.

The dog can’t be sitting on your lap, or you won’t be able to paddle. Needs to be a bit away from you. So for sit ins, you either need a second cockpit or a very large (as in recreational class kayak) cockpit. Maybe it could work to have the dog sit in the front seat of a double sea kayak, and that could be seaworthy enough vessel for Puget Sound. But you really would want to make sure you know how to rescue yourself in it, and even after rescuing yourself, you may not be able to bring the dog back into the kayak after a flip.

Given that fitting a 55 pound dog into a sea kayak is challenging (unless it is willing to sit in the front seat of a double), the sit on top likely is the better choice. Or, as Celia said, skip Puget Sound paddling and stick to Lake Union and protected bodies of water smaller than that.

As stated, canoes are good for dogs, but they don’t like windy areas and really shouldn’t be out in the potential waves of Puget Sound either.

SUPs do well with dogs, so that may be an option.

Note (The OPs dog is probably too big for this, so this note is more for future people who find this thread using a search) - it isn’t that uncommon to see someone open a hatch and leave it with the cover off and make that a place for a smaller dog to sit. Keep in mind that doing so takes away the flotation benefit of that hatch, so if you do flip, your may now not have enough flotation for a deep water recovery. Filling the rest of the hatch with float bags or other flotation could help reduce this issue.

A sit on top, if it is a well designed seaworthy model can work with a 55 lb dog. Several years ago I had a friend who took his dog along on crossings of the Channel to Catalina Island, I believe he used 16’ tarpon; I think recent designs of SOTs have got fairly wide and heavier so might be a much to load and unload. You want to do a test drive and see how the dog feels about paddling on coastal ocean areas and rough water in the Sound. My large Shelty absolutely hated being in canoes or kayaks. She could however do a wet re-entry without much trouble in a Hobie SOT, not so in a canoe. Tsunami Chuck who posts here paddles with his world famous dog Paris; he lets her ride on top deck of a SINK, she wears a flotation device and seems to be quite happy paddling choppy waters in Alaska. She doesn’t weigh 55 lbs.

See how big your 55 pound dog is with the proper sized PFD. You’re 5-4 and a intermediate paddler. Add a dog and it will degrade your skills, your speed, and your handling further. Add the choppy water your are looking for and your dog is at severe risk along with yourself. You may not look for choppy water it may find you. It’s all fun till it isn’t when things go wrong in cold choppy water or any water. 59° water you need a wetsuit at a minimum. Get your dog out in that water it will have no wetsuit and any type of dog is subject to hypothermia also. Doesn’t matter if they are a water dog they’ll perish also. They are no magical if in the water.

If you can’t handle a tandem sitting in the back a non paddling dog won’t help much. We all love are dogs but some things are just possiblity to make ourselves happy and the dog won’t be so happy.

OT Vapor are great to paddle with dog as long as not too choppy. Big open cockpit. Many on this site are not familiar with rec kayaks.

Many are familiar enough with the paddling conditions in places like Puget Sound. Big open cockpit is not a plan for that area, per advice from people who regularly paddle that area. Or did you miss the part that it is regularly Level 3 and 4 water?

Trying to make things easy is not always safe. In this case IMO you are being reckless.

Who is the “you”? The OP or me? You presume people have no common sense.

So what is your recommendation other than stay home or paddle in your pool?

So what is your recommendation other than stay home or paddle in your pool?

If the water is 59°F as someone said better to skip the OP idea. I have heard water in the Pacific NW is cold even in the summer?

When I look at questions by OP I think they are not that experienced with their plan or desires.

What’s choppy water? We probably all have different ideas if it in our minds. Forecast is a forecast not a guarantee.

Still no recommendation from the so called elites other than “forget about it”!