I transport my kayak on car roof racks with strong tie-downs. To make it more secure, I also use bow and stern lines. Right now I’m using 5/32" (3.9 mm) nylon paracord (safe working load: 110 lbs), which works well most of the time. However, when it gets wet, e.g. by rains, the lines can get loose. Any recommendations for the materials of bow and stern lines with similar sizes (not too much thicker), which can work well in both dry and wet conditions?

Why do you limit yourself to such small-diameter line for your tie-downs? I use relatively cheap, braided polypropylene rope for my tie-downs, in a 3/8-inch diameter. Even being of fairly low quality, this rope is much stronger, and the extra diameter makes it wear well and be easy to handle for knot tying. Polypropylene doesn’t seem to change tension (length) when soaked with water. I’ve heard people complain about visual distraction of having tie-downs in their field of view, but that has never bothered me. I focus on the road ahead and not on the lines themselves, and that’s almost as good as making them disappear, as far as the image in my brain is concerned. I avoid “twist-braid” rope, because for ropes made from synthetic materials, that type of construction provides rather poor knot-tying properties in comparison to braid.

I’m using metal rings at the bow and stern ends, which limit the line diameter. I would have to use extra parts, e.g., if I use thicker lines which can’t go through the rings. I’m using the clove hitch not, and a 3/8" line may be too thick. Maybe a different not will work.

A strong carabiner wouldn’t work for you?

It would. I used to use a carabiner at the bow end (I use two bow lines and one stern line), when I was using ratchet pulleys. Just trying to minimize accessories. But if 3/8" Polypropylene lines are the best option for me, I can use a carabiner.

110 WL is not enough for much of anything.

Rookie is right that you could use a carabiner to connect a thicker rope to your existing rings. I can’t picture how a clove hitch would be suitable as a line-attachment method to a ring (or carabiner), but maybe I’m missing something in your description. I would use something like a bowline on one end of the tie-down line (or some other non-slip, easy-to-untie method) and a trucker’s hitch at the other. A good and simple alternative to a trucker’s hitch is to wrap the line twice around the attachment point, pull it as tight as it needs to be, and while holding it tight by squeezing the wrap-around part with your fingers, tie two half hitches flush against the attachment point. That’s a very good way of securing a line that is tight without allowing it to loosen in the process.

If 110 WL is not enough, what’s the minimum I should use? My boat is light, only 39 lbs. But since it’s on top of a car, especially when on a high way, I may need much stronger lines.

I do use an extra knot in addition to the clove hitch to better secure it. Since it’s outside the rings, I didn’t mention it. And I do use the trucker’s hitch (I like it, BTW) at the other end (to hood loops).

I don’t know the load rating, but I like 5/16" rope. Occasionally I’ve used 1/4" or 3/8" when I couldn’t find the 5/16" line. Most of my end lines are braided nylon, which is good for abrasion resistance though tension does need to be adjusted when getting wet or drying out. I use a taut line hitch for easy adjustment.

Thule includes 1/4" soft synthetic rope in their kit. They do tend to loosen a bit with shifting, dampness, and temperature change. But your bow/stern lines shouldn’t be crazy-tight anyway, just snugged up to prevent movement.

(Attach the hooks with better knots than shown in the video. Also, some point out that the S-hooks can unexpectedly come free and substitute a carabiner)
https://youtu.be/txJ4tE4gtQw

Ropes need replaced every couple years due to UV degradation.

Bluewater Ropes, accessory cord, 6mm X 30 feet.
On sale at Steep & Cheap for $8.96
Should make two painters for your boat, with decent sized piece leftover.
If it lasts 5 years (it will,if not constantly exposed to UV) it will cost you about 2 bucks per year. That’s dirt cheap cost for peace of mind.

Look for polyester rather than nylon cord. Nylon is more susceptible to UV than poly. I would NEVER use paracord. 110 pound test, even 550 pound, is woefully insufficient for the wind and dynamic impact loads that can and do occur to roof-mounted boats. Any “security” you think that is providing is delusional. This is not just my “opinion”. I used to sell climbing gear and had training in the architecture and load dynamics of cordage and webbing. This guy covers the basics of paracord pretty well::

I’ve driven thousands of miles at highway speeds using 1/4" and 3/8" polyester kernmantel cord (fiber core with braided sheath) mostly using S hooks and even the ratchet tighteners that many people warn are “risky”. I do fasten the bow and stern lines with a backup loop from the boat to the tie off points such that if any of the metal attachment gizmos should fail the boat would still be attached, but have never had a failure. My routine for racking my kayaks for transport is a little complicated but I have been doing it for so long that each step is automatic and gets done fast. Always stop to walk around and check all straps and guy lines once a few miles down the road and then again at each pit stop.

I would add that there is a wide range of reliability and strength in non-climbing rated carabiners. I’ve seen smaller ones deform and wrench open under severe dynamic loading.

https://www.knotandrope.com/store/pc/StaSet-X-Sailing-Line-8p2762.htm 1/4" I would use last for years exposed.

Use long enough rope to loop around your perimeter line, meaning twice the length. That should be fairly strong stuff. And you can use whatever size for the .bow and stern lines.

if you really want to stay with the thinner line, then I suggest this 500# tensile dacron kite line. it is the same diameter as paracord, but does not stretch. its “knotability” is less than nylon, because it does not stretch, but it does hold knots pretty well.

not sure if you can buy in shorter lengths - just google for 500 pound test kite line and see what you can find - likely can be had at any kite store.

the downside of thinner lines is that they “cut” over an edge easier than larger diameters - anything is considered an “edge”, even a metal ring or carabiner

I have recently changed to using hood loops for front tie downs. Previously I had been using the front tow hooks. Then I read of someone who had a front tie down come loose, get under the front tire, destroy a boat, and damage the car. Now my tie downs are too short to reach the ground when attached to the boat and untied. Just a thought for consideration. 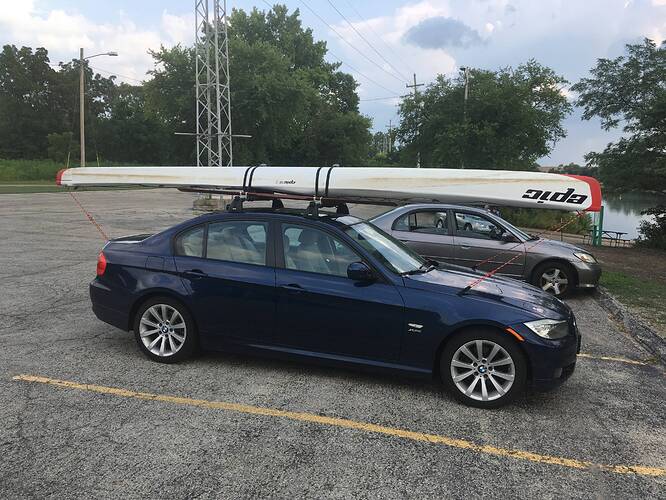 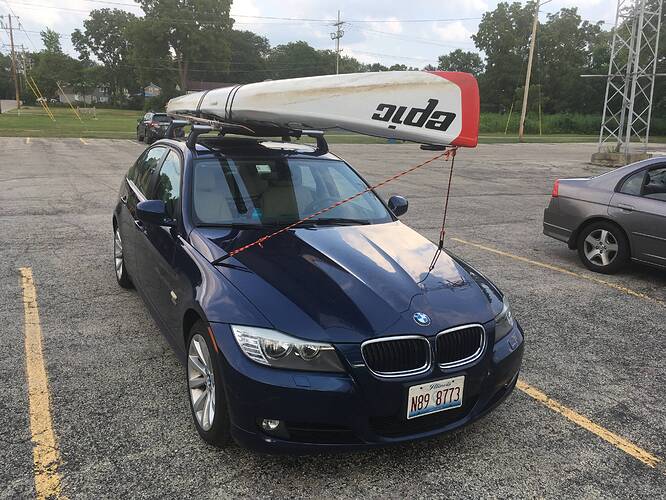 4032×3024 1.8 MB
After reading all the comments, I did some shopping. Bought a 1/4" polypropylene rope and use the angler’s knot (no other extra knots on top of it), instead of the clove hitch knot (which wouldn’t fit the metal ring), to tie it to the metal ring. Works perfectly. 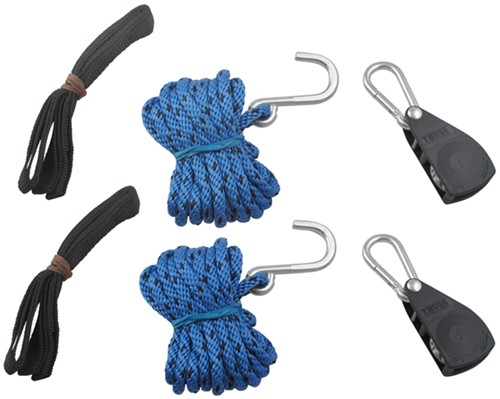