Mid-60’s in February in southern New England – time to paddle!

The forecast was for temperatures in the mid-60’s (it actually hit 70 in Hartford, CT), so I decided to take the afternoon off to paddle. We ran the Quinebaug River from Danielson to Canterbury in CT.

This is one of my favorite sections of the Quinebaug with a little bit of everything - some flatwater, lots of quickwater and a couple of easy rapids. This is us running the rapid above the Wauregen Road Bridge (I’m in the green boat).

Its back down into the 20’s this morning, and we could get 10” of snow tomorrow – crazy weather so you have to enjoy it while you can. Few more pictures here: 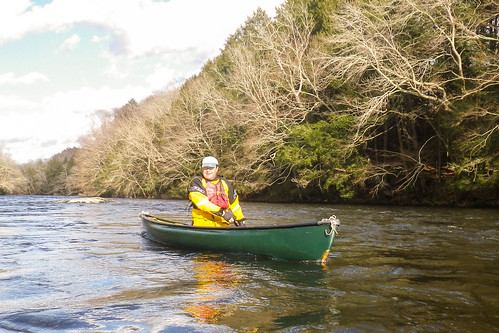 We hit 64 yesterday here in New Hampshire, and it was 13 degrees when I woke up this morning. Looking at a possible foot of snow tomorrow, then back to the 50’s by next weekend. Gotta love New England weather. If it was more unstable, I might try to marry it lol.

We hit 64 yesterday here in New Hampshire, and it was 13 degrees when I woke up this morning. Looking at a possible foot of snow tomorrow, then back to the 50’s by next weekend.

Snow just started here in RI, but it now sounds like it will turn to rain this afternoon, and then flash freeze tonight turning everything to an icy mess - gotta love it.

Hoping to get up your way this spring to run some NH river, so let it snow - water in the bank.

Hoping to get up your way this spring to run some NH river, so let it snow - water in the bank.

I think northern New England, including NH, has gotten a more “normal” snowfall this year. Boston’s been sitting on the snow/rain line. I think we have been near normal with precip. It’s snowing pretty heavily right now.

Now, with temps, we are certainly going to end up again in the top five records for warmth. At some point, that is going to affect future “snow in the bank” totals…

Hopefully, will be able to see (and reconnect with) the longboat again in a couple of days… 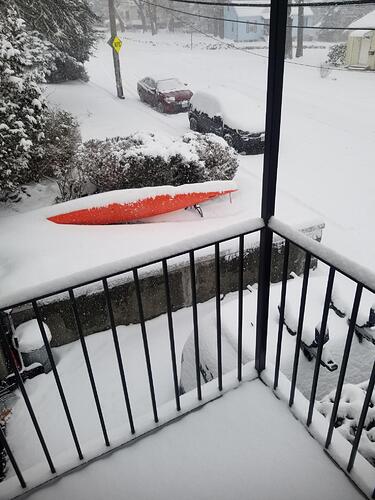 You know, I have often thought about getting a cheap, busted up kayak solely for the purpose of using it as a sled. I bet it could be fun!

LOL!!! Google it. Plenty of vids of folks doing that. Must say that I am not and never was one of those who wondered, “Hey, would it be cool to ‘kayak’ myself down a snow covered hill, testing my stern rudder!”

BTW. If I dragged my kayak down to the street and point downhill, I bet it would go better by itself than with me in it and mucking up the descent line! 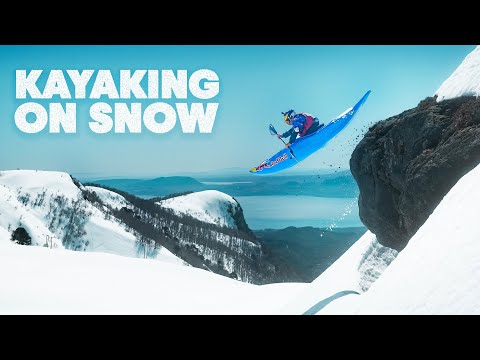 Anyway, Erik should be glad that he got his river run in this week. The rest of us are just getting too antsy waiting for better conditions.

Whitewater kayaks are pretty tough. I’ve done a little sledding in my Necky Jive - the bottom was already pretty scratched up, so didn’t notice the difference. I wouldn’t want to hit a tree at terminal velocity however.

I’m relatively new here and in becoming aware of paddling last spring I have learned a lot in one year.

I know most of the frequent posters here are highly skilled and aware of all the possible problems with pushing the length of the season in the north. They have both the skills and equipment to make it possible along with partner paddlers skilled in knowing what to do if something goes wrong.

We have had a few mild days and some open river days where the water has exceeded the banks and so far no one that I know of has ventured out. I do see people posting warnings on social media to stay off the water and it almost seems absurd with the ice conditions.

I would say about a month from now is when problems will start around here from what I have seen in previous years and the water will still be high and fast but the air will be so inviting for an adventure day on the river. Last year I watched two young women in rec-kayaks with nothing but swimsuits paddle off PFDs tucked in behind the seats so as to not interfere with suntans. I asked them if they were ready to be swimming and they said I hope not the water is ice cold.

I know the comparison between prepared and unprepared is great here. I also think we should do our part in letting folks know just what it takes to do this cold water stuff with a good degree of safety. Many more members read here than ever post and many more that are just viewing looking for adventure ideas. For me my boats will be sitting tight till the water makes it to the 60s.

Guess I know what my weekend plans are. Pounding a case of Red Bull, grabbing a $100 Pelican, and heading to Tuckerman’s Ravine

I would say about a month from now is when problems will start around here from what I have seen in previous years and the water will still be high and fast but the air will be so inviting for an adventure day on the river. Last year I watched two young women in rec-kayaks with nothing but swimsuits paddle off PFDs tucked in behind the seats so as to not interfere with suntans.

I think I’ve been calling the mid Fall and early Spring (with warm air temp) the “killing seasons.” Without fail, every year, lives are claimed. Mostly, of folks who just didn’t know what they didn’t know. I’ve read of PNetters and posted some of my own close calls. I don’t recall any who died from water related incidents. Maybe awareness from reading here and training on the water helped. (Shrug) Want to read a harrowing incident with a skilled PNetter (he passed health related), search for post by “live2paddle (livetopaddle)”.

For me my boats will be sitting tight till the water makes it to the 60s.

I’d go crazy if I had to wait until the rivers hit 60-degrees. Right now the rivers around here are in the low to mid 30’s. The ocean is in the low 40’s. Lakes and ponds are still frozen - at least too iced over to paddle.

Lots of people around here paddle year round - sea kayakers and river paddlers. Cold water gear is definitely required, and its probably not the time to push your limits. Most of the good whitewater paddling around here is in March and April, maybe into early May. If you don’t paddle in cold water you don’t paddle whitewater. It can be done safely - at least compared to someone paddling alone, not wearing cold water gear, and not wearing a PFD.

I was out in the Delaware bay 2 days ago , air temp was 62 , water temp was 39, I had my dry suit on, ran into another paddles, PFD in the back of his well wearing a sweatshirt, he was about 400 yards from shore but still …

@bud16415 got me thinking about when the rivers around here actually hit 60-degrees.
USGS doesn’t track water temperatures on a lot of their gages, but this one they do - Quinapoxet River in central MA. This was the water temperature over the last year: 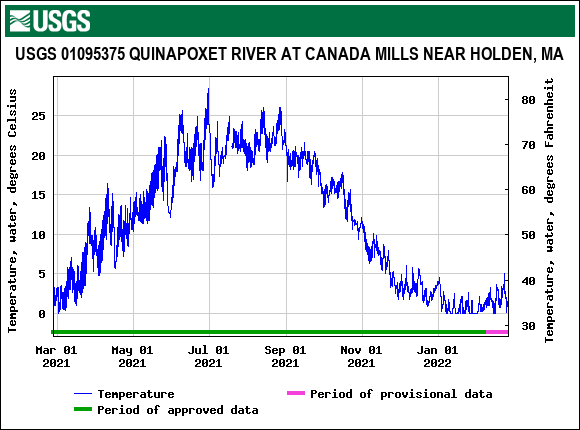 Looks like it hit 60-degrees in early May, and dropped below in late October. That makes sense. I usually wear my dry suit from November to May, and will often switch to a wetsuit in May and October.

Do agree that inexperienced people tend to get themselves into trouble in the spring when the air heats up faster than the water. Everyone is anxious to get out and enjoy the fresh air. Around here, fatalities in the late fall/early winter tend to be duck hunters - motoring out in small boats in bad conditions without PFD’s or cold water gear. Ocean is a little warmer than the rivers, but not much.

Your gage graph looks like I would expect the same here in northern Pa. This would be real early to see anyone on the river but it will be changing really fast during the next month.

I didn’t intend my post to dissuade anyone from venturing out in proper gear, only around here no one has proper gear only thing they are seeing is high fast water and adventure.

Even during the warm summer months it is a real battle keeping folks off during flash flooding times.

As a teen and into my 20’s a group of friends always had a beach party on Memorial weekend on Lake Erie and the tradition became we would all go for a swim. I know my body today could not take that immersion and even then a few of the swims were less than a minute long. The rivers warm a lot faster than the lake though.

I didn’t intend my post to dissuade anyone from venturing out in proper gear, only around here no one has proper gear only thing they are seeing is high fast water and adventure.

Agreed - there are a lot of people who are out earlier/later than they should be, without proper gear, or in conditions that they can’t handle. Usually it ends up fine, but on occasion…

The last river fatality in my area was November 2008 - father and son were running an old dam’s sluice gates in high water. The canoe got pinned on debris and the son died when the painter line wrapped around his ankle.

There are many examples on Narragansett Bay - last one I remember was a woman who paddled down to the mouth of the Narrow River, which is notorious for strong currents and difficult waves.

Fortunately boating accidents are rare even among inexperienced paddlers (at least compared to car accidents), but they still happen more often than they should.

Ice fisherman and skaters have also gone through the ice in recent weeks.

Seriously, if it were to venture out on the ice (highly unlikely), I would be wearing one of the waist inflatable belts.