My kayak gets dented when in transport on it’s foam blocks!?!

Hi guys!! This community has been amazingly helpful and I hope you guys have knowledge regarding my predicament.

When I strap my Old Town Loon 126 to my roof rack, the bottom will dent into the cockpit.
I’m not using ratchet straps, and the boat rests on foam blocks. All the blocks, straps and lines I got from western canoe and kayak (where I also purchased my Loon) and they even showed me the proper way to strap down my kayak.

Now, I am being exceedingly careful to not over tighten the boat. In fact, the last trip when it dented in, I loosened the straps even more to juuuust hold the boat because I was so nervous about the indenting! We have been able to gently push some of the dents out, so at the moment it doesn’t look so bad. But it’s still pushed in more than it usually is. And when it’s strapped up and transported, when we reach the destination it is much further dented in. We tried to push the boat back a little more so that the most concave point isn’t resting on the block. 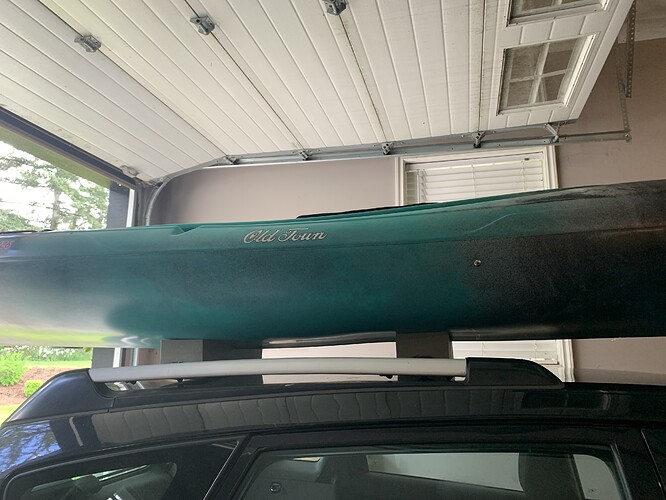 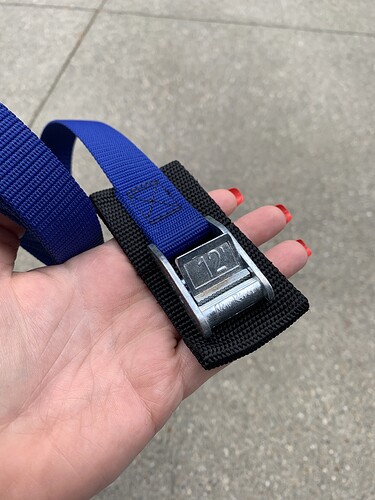 Is the kayak getting ruined?! Is this normal? Is this the sun? The employees at the shop are knowledgeable and said the rack is good for the kayak. What do I do? So nervous to take it anywhere now!

I’ll try to show you what I mean, but it’s not as indented as it was earlier but as soon as I strap it I’m concerned for it doing bad again.
Any and all info is very appreciated!! 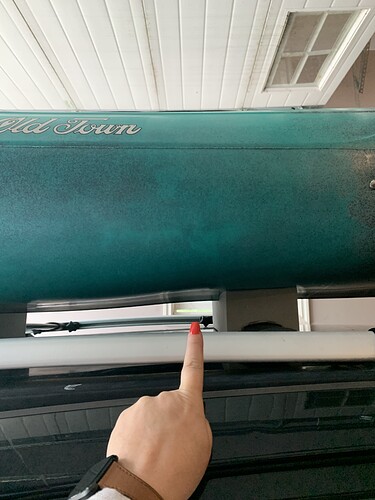 I’ve seen that happen with multiple different boats when using foam blocks. Generally, you can set your boat out in the sun afterward and it will go back to its original shape.

The issue is the amount of pressure in a fairly ‘weak’ area of the boat. Wider blocks will lessen the effect but probably won’t solve it completely. You’ll need to move the ‘pressure’ areas toward the outside of the hull, preferably with mounts that cradle the boat from the bottom to the chine area. Having your mounts closer to any bulkheads is also preferable. This thread will give you numerous pictures to peruse:

Since there are always lots of questions on roof racks and car topping various types of watercraft, thought it might be handy to start a thread with pictures. Plus I got a good shot of my car and kayak today! Tiderace Xceed S (17’9”) on a 2014 Subaru Crosstrek. Yakima/Whispbar 53” aero bars with Marco Saddles. NRS straps and a Thule ratchet bow line. [image]

A slight variation from what @High_Desert said, set the boat out in a warm to hot area (like the sun) and it will return to NEARLY the original shape.

Tight straps cause the boat to flex in. The boat can kind of assume the shape of the new position, which it will hold until it is warmed up again. Having the boats trapped in warm to hot temps or direct sun would be worse than in cold weather.

These dents, especially if minor, do not affect the way the boat works. But they look bad.

If you use less tightening on the straps as much and still have enough to hold it on, that would be helpful.

Changing to saddles, or better yet, J-racks, would help a lot. They spread the load more. The J-racks are better because they put the boat on its side, and the curved sides of a boat are stronger than the flat bottoms.

Yes to all of the above responses. I would move the foam blocks as far apart on the roof as you can - not so much for the kayak, but the center of the roof on most cars is quite flimsy. Putting the blocks near the front and rear edges of the roof will place the weight on a much sturdier part of the roof. The straps do not have to be lined up with the blocks.

Oilcanning is an annoying but somewhat unavoidable problem, especially with large cockpit, flat bottomed plastic rec kayaks. You won’t break the kayak, but this has freaked out many a new kayak owner.

Get longer blocks you seem to have the blocks in the center of the bottom. Blocks heed to come out to the sides where the hull has more strength.

It looks like you have two problems, both of them changeable.

First, as just stated above, the foam blocks look much too narrow relative to the boat’s width. That’s like a bigbutted person sitting on a headrest pillow—the support isn’t wide enough.

Second, that huge, weak holed area (the hull below the coaming) has a block smack in the middle of it below. Support the kayak in front of and in back of the coaming, if you can. Not in the middle! The car roof looks way too short to enable this, so you might need to switch to a different way to roofhaul.

I’m new to all this also and we have one canoe and one kayak both made by Old Town and the kayak is somewhat similar. I store them both upside down on saw horses and the kayak is flat enough it rests fine upside down. I have a roof rack I made that has two flat cross bars and my plan is to load the canoe and kayak side by side both upside down and each strapped with two cam straps like the op shows she has. My canoe I use a bow and stern line also and I’m debating if I will need one with the kayak at least for short distances at lower speeds. I will likely run one to each end of the kayak to the carry handles.

Is there a reason a rec kayak can’t ride upside down?

As to the oil can / hogging one of the reasons I got the poly canoe cheap is it was stored on a woodpile and had a pretty deep hog where it came to rest. I figured out a way to make a removable brace that sat against the hull and under the gunwale with a threaded piece of thread stock and some nuts that I used to push the hull back in place. Once I got the shape right I flipped it over in the spring sunlight for a couple weeks. The combination of the brace and the sun everything came back 100%. Think of it as those things you put in your good shoes before you store them. The shape stays fine but when not in use I put it back in the canoe. I don’t see why something like that couldn’t stay in when on the car as well to support the center keel line.

Unless I find a good reason not to put it on the car upside down that will be my plan. Seems like wind would be less trying to pull it off and if it rains it wont take on water.

Also, carrying the kayak inverted when using foam blocks helps. The straps may still slightly deform the hull in a similar fashion, however it is spread over a larger area.

Carrying them hull up keeps the rain out also. Typically not a problem if you are moving but we stopped for lunch one day in a toad strangler(heavy rain). Needed 2 bilge pumps to empty the boat.

In general plastic boats can be carried right side up or upside down. In some boats the latter is preferable because the deck is made a bit stronger than the bottom. I cannot however speak to that for Old Town boats.

It appears you are going to take some of the above advice like deck down and longer blocks, but I note one thing. Your photos show a raised roof rail - I assume you are putting the straps around that - which may be a smidge shorter than the cockpit. You can run the straps thru the doors so they come inside the car if you need to get the length. It won’t hurt the car and risking a kayak flying off to hit a car behind you could be the end of affordable insurance for a long time.

You can do things like pop dents out in the sun etc. But keep in mind that your kayak is a rec boat, and there are somethings that go with the territory like plastic that can dent more easily than some other types of kayaks. Loons are not speedsters to start with, performance considerations from minor hull dents are not the same issue as for a faster boat. If you have to choose between cosmetic denting and cartop safety, take the dent.

@pikabike pointed out the problem is that the blocks, any blocks are likely going to put pressure on the hull in a broad unsupported area in this type of kayak. Dents (or I’ll date myself) Wows are going to happen. The only way to prevent this is by adding crossbars to your vehicle and either using j cradles or a stacker, carry the boat on its side. This has its own loading can of worms but I’m just addressing the dentage issue. The sides of the kayak will be much more rigid than the bottom of this kayaks hull.

I read this thread this morning and it got me moving on my extension adapters to my rack so I can haul 2 canoes or our canoe and kayak. The neighbor has a canoe and he has suggested we take them out sometime so I wanted the option for two full size canoes although it will be rare.

I got my extensions made and mounted (takes just 5 minutes to change over.

I thought I would try the kayak on and make sure riding inverted works as well as take a look at hull denting in doing it that way. It was very secure up side down using (2) 12’ loop cam strap.

If I was the OP I would get rid of the foam blocks and buy a set of cross bars for your cars rail system. and strap it down as I’m showing in the photo I took today of mine. 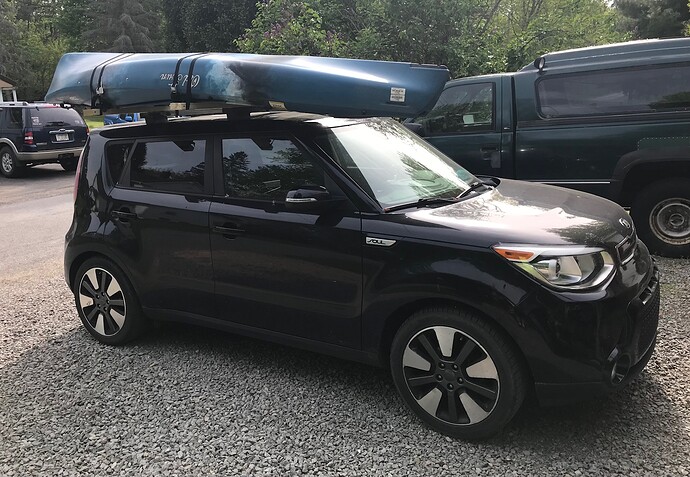 Get a decent rack with cradles. Never crank a boat down with cinch straps.
I like rope for typing them to a rack.

Get a set of crossbars and saddles or J-bars. The foam blocks will eventually wear the paint off of your roof plus they don’t support the kayak as well, concentrating the load on too narrow an area. In addition, your car’s roof, as opposed to the rails, is not designed to carry a load.

Place the saddles or J-bars as far apart as possible and center the kayak on them with the load points as near the kayak bulkheads as possible (within reason). That is where the kayak is strongest.

On very hot days, if using saddles, plastic boats are often carried upside down. Not only is the deck often a bit stronger, a little oil canning on the deck may be a cosmetic irritant, but it will not affect performance. It also keeps out rain. An inch or more of water in the cockpit can weigh a lot if not using a cockpit cover.

The nylon straps and tiedowns need only be snug. The straps don’t stretch and the shape of the boat prevents the boat from shifting.