For my new Northstar Tandem I am planning to replace the bungee cord and the perimeter rope.

The current cording is as shown in the pictures below. I have a few questions:

The current bungee cord is in the typical cross pattern but, it then extends down both sides of the cockpits and then also has a loose section that is about 4 feet in length which has been pulled back up beside the cockpits and tucked under so it is not hanging completely free. The kayak also has a complete perimeter rope (both sides, front to back.) I do not understand why the bungee cord extends beside the cockpits nor why there are the loose sections. (None of the pictures show this very well but you can see the ends of the loose sections in the first and third pictures.)

Any idea of the purpose of the loose sections? 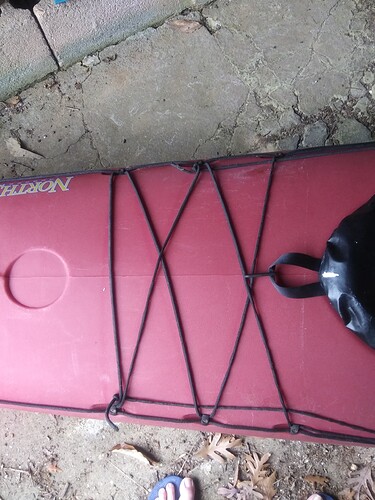 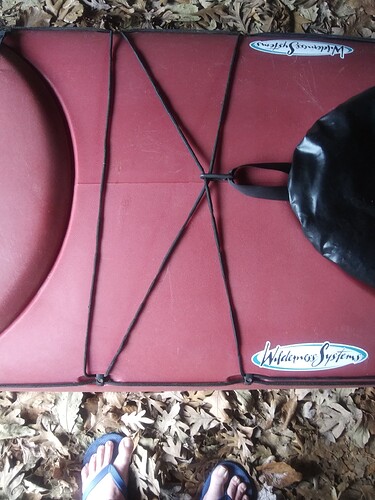 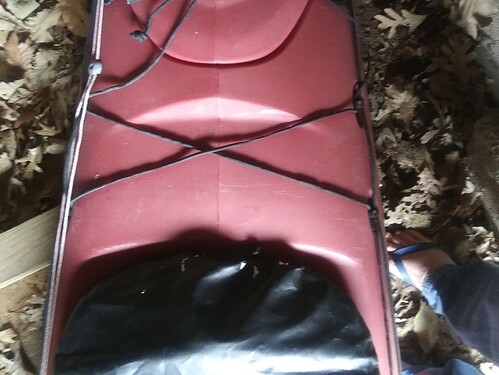 Thanks for all the good advice!

The bungee that is parallel to the deck rigging should not be there IMO. I think it’s a hazard. Imagine grabbing that instead of the deck line in an emergency. No bueno. I think whoever did it was misguided.

Previous user likely didn’t want to cut & seal the bungee. Don’t do that. Pru is right.

I would be interested in hearing if others have a reason for running a Bungee parallel to the cockpit, because I don’t know of any and can’t recall having seen it before.

On the extra, one possibility is that as the bungee stretches, it isn’t uncommon to pull it taught, re-knot it, and cut off the extra.

I agree with Pru that running a bungee paralel and next to a static deck line is not beneficial. 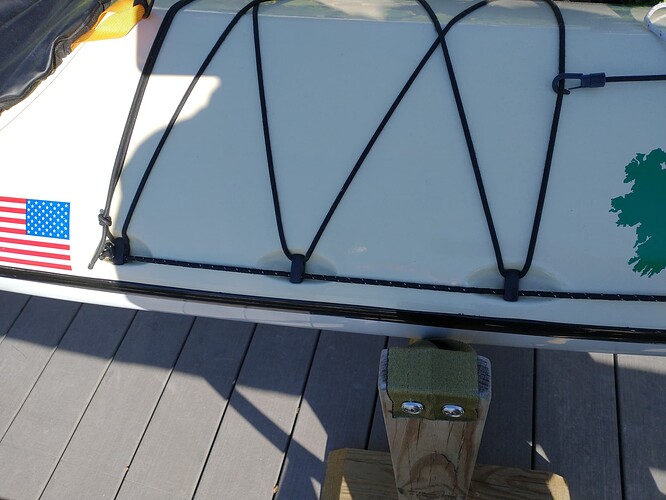 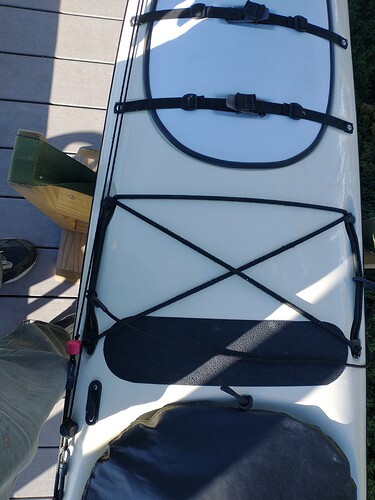 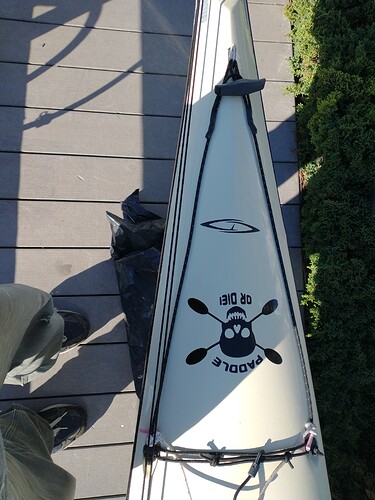 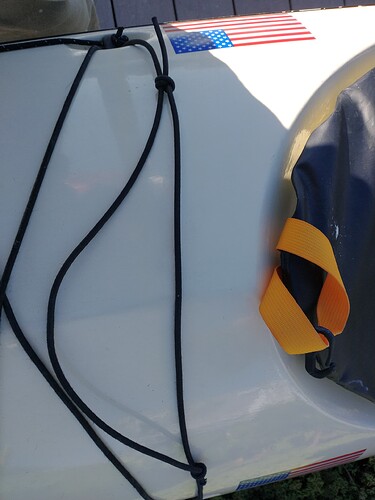 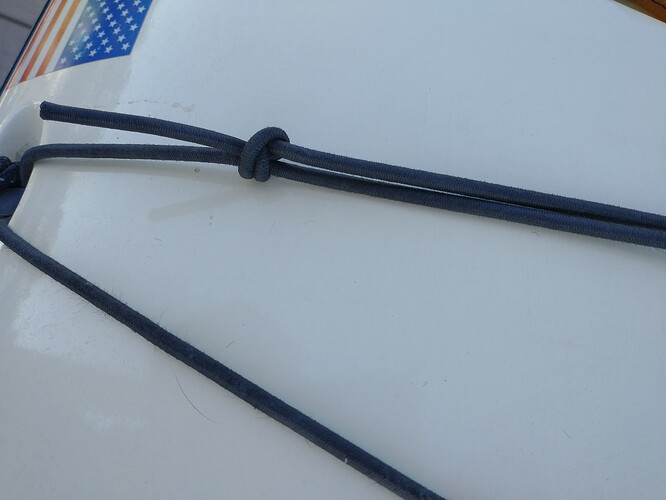 Finish it it like that you can add or decrease bungee tension.

Mine are at the end of their life span on that hull.

I get marine grade made in USA bungee.

I looked at quite a few pictures, on this site and elsewhere, and did not find any examples of the bungees being run along side the cockpits (with or without a perimeter rope.) Like @Pru and @rival51 said, it looks like a safety hazard to me… but since I am so new to this I do not trust my own opinions.

The bungees are really old @Peter-CA so that may be where the extra length came from. I thought at first that the extra length might be used as paddle leashes but I think they are in the wrong place for that and there are too many (6 extra lengths.)

What kind of knot is that @PaddleDog52? It looks a little like a double half hitch. I can see how that could allow for the tension to be maintained over time. I did get marine grade bungee.

How do you cut and seal bungee cord? I was just planning to cut it and tie it off (using a figure 8 knot.) Or maybe tie it and then cut it.

Cut and then burn the cut end to seal it so it doesn’t fray.

ETA here is how I did it on my SUP. I tie a Fishermans knot so I can pull it tighter without retying if needed if/when it stretches. 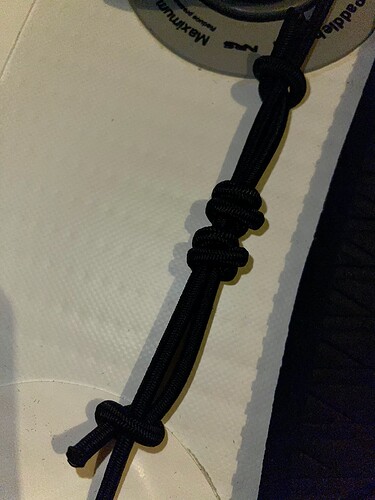 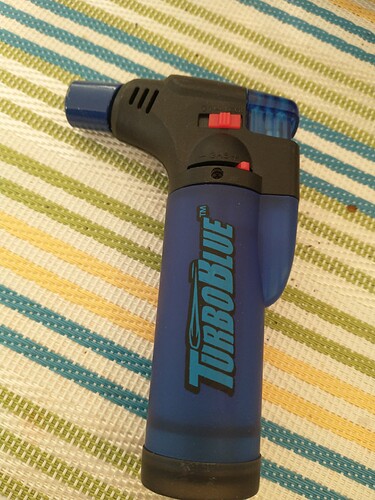 Cut with something sharp and hit with flame immediately. It unravels fast and it doesn’t take much heat. Couple of clicks on lighter I have. Half hitch on end. I put some shrink tube on some squeeze the end. I’m

I’ve started using a short length of heat-shrink on the end of the bungee. Heat it until it’s attached, then cut through the heat shrink and bungee, then hit the end with a flame.

I use the marine stuff with the adhesive inside, it lasts longer and doesn’t slide off.

I don’t find running bungee parallel to the perimeter lines in the areas fore and aft of the cockpit and past the hatches where gear and paddles are normally stored to be a real problem. I don’t see any use for bungees being run with the perimeter lines. alongside of the cockpit and hatches, however. And certainly no use for a spare length of bungee just laying on the deck.

Thanks for your reply. That is something to consider.

I use stainless safety wire twisted , folded over, wrapped with electrical tape. Black or red…

We both heat melt the cut ends.

I use SS hog rings and shrink wrap. That’s how Current Designs rigs their hulls at certain junctions.

I don’t find bungee to be particularly useful and have very little of it on my boats. It won’t hold things in place in conditions where the deck is getting washed by waves or surf, which often creates a “yard sale” situation on the water.

Rather than bungee, I use cords and sliders as shown below. They hold items securely in any conditions, but allow quick access when necessary. You simply push the sliders toward the center to create slack in the lines and toward the outside to tighten them.

I only use two strands of bungee on the foredeck, one just ahead of the cords/sliders (for holding things like gloves or a hood when I don’t need them) and one up by the compass to capture the end of my spare paddle.

In case you’re wondering, the purpose of the wooden balls on the bungee and deck lines is to elevate them and make it easier to slip the paddle under the bungee, or grab the deck lines during a rescue situation. 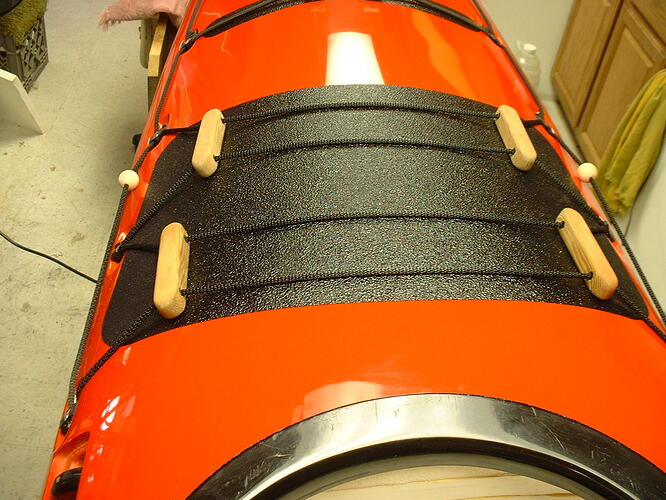 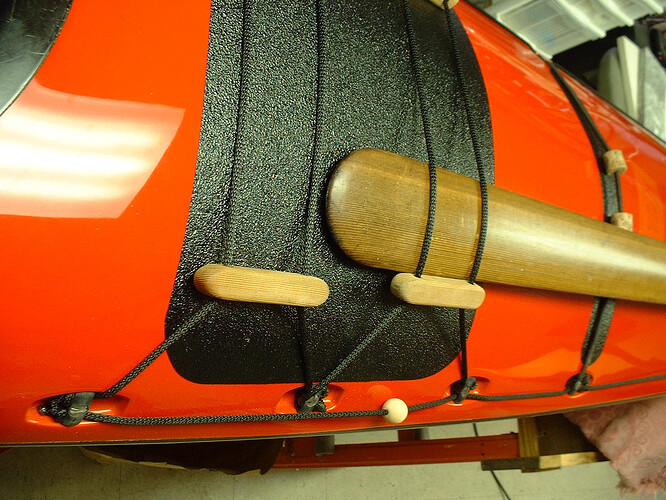 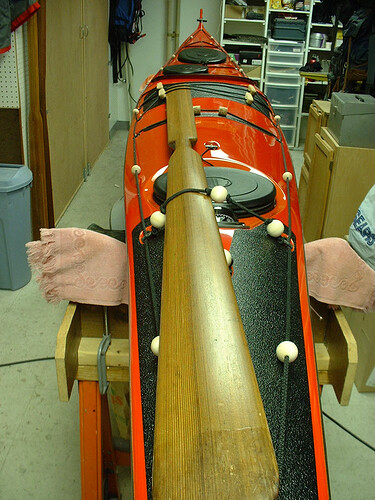 Whenever I store things under the bungee cord, I use carabiners where I can to ensure they don’t become dislodged from my boat if water washes over the deck. I like the idea of using sliders. bnystrom; what are you using to protect your deck’s gelcoat?

Rather than bungee, I use cords and sliders as shown below.

Agree that no-stretch line and sliders work really well — tried and true retro technology from before there was commercial bungee.

I like the idea of the no-slip surface in your setup - what is that?

I knew somebody would ask that…

I dug through my notes and it’s Prostripe Black Tread Tape (part# R82403) Safety Tread Non-Skid Tread - Prostripe Automotive Restyling Products. I used 4" wide tape and combined multiple pieces to get the sizes I wanted. Over the years, it shrank slightly and opened small gaps between the pieces, but it still works fine. I used it mainly to reduce abrasion on the deck, which I had recently restored. Here’s a link to my tutorial on that topic:
Gelcoat Restoration | BrianNystrom.com

I had strips of that on my Alaw Bach so my spare 2-piece paddle wouldn’t gouge the gel coat. It’s good stuff.

Thanks for all of the suggestions and advice.

Next up are some b u l k h e a d questions… but I will start a new thread for that to keep the separate topics easier to find.