Any problems with this (short trips)? 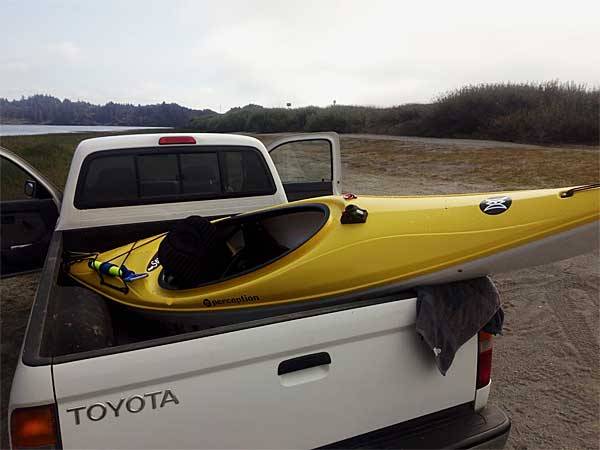 Nowadays most whitewater kayaks are short enough to fit flat in the truck bed. But back in the 1990s when they were 10 1/2 feet long, or longer, I know guys who would drive across four or five states with their kayaks like that.

Depending on laws and length 8-6" is a width limit and a red flag may be required. Google your state DOT LAWS .Tie it in good you would be shocked how things get lose.

Being at an angle, best to make sure it doesn’t stick too far out to the passenger side. Probably doesn’t, but I can’t tell for sure looking at photo.

I would also tie it down in the bed somehow. Don;t just use gravity to hold it in place. And also tie it so that it doesn’t bounce on the tailgate, as that could damage the boat.

Getting a single crossbar for the cab and a t-bar that attaches to the bed or to a trailer hitch (if you have one) and carrying the boat across the roof and over the bed would be safer and preferable. Having it hang out that far off center is asking for trouble in traffic and possibly a ticket. NEVER haul a kayak without tying it securely into or onto the vehicle.

Geezus, TIE IT TO THE BED!

You want someone else to be killed by your giant projectile? And you get sued?

It might be better to carry the boat entirely in the bed with the tailgate down and with a red flag. If you are crossing a state line, you should be aware that a 2’x2’ flag is required. Check with your state to see what it requires within the state.

Consider a proper trailer for the best and most practical alternative.

More and more obvious tie downs. I would get away from being behind you as fast as possible since I don’t see anything securing the end of the kayak that is sticking out back to the truck bed. Like run a line thru that carry handle and back to spot(s) on the bed. If I saw that I would assume that something similar had been done for the front. And you likely need a red flag.
Likely want more padding than you have, and center the boat so it is not sticking out the side. It may just be an optical effect from the angle of the photo, but it looks like it is sticking far enough out to the side to be a traffic violation for a police officer being picky.

I have seen folks handle this and keep the boat from getting scratched up by dropping the truck gate so it can be flat, as suggested above.

Photos are deceiving - especially short lenses like that on a phone camera. You’ll get better answers with some measurements. What is that - a Tacoma with a 6’ bed? Or is it 5’?

The boat is 10’ long. These are rough estimates, but if the bed is 6’, and about 4’ wide, a little more than 2.75’ will be hanging out the back. If it’s a 5’ bed, about 4’ wide, a little more than 3.5’ will hang out. The angle will be something less than 45° for either, so the most it will stick out the side would be about a foot and a half. In some states, that will be a problem. Others, not so much. If the bed is 6’, I’d say you’re pretty safe for short distances - as long as you secure it so it doesn’t bounce around…or out, in the case of an accident. I don’t think you will hurt the boat other than scratching it, unless you drive like Ivan Stewart.

I don’t know the measurement of the tailgate, but let’s say it’s a foot and a half high. Lower that gate, and less than two feet (or two and a half, for the 5’ bed) will be unsupported and beyond the gate - and it won’t stick out the side at all. I’d say that is better for the boat, and for your truck. I’d want something like a piece of indoor/outdoor carpet under the boat though, because that Rhino liner can be rough on finishes.

In any case - do tie it down so it won’t shift from side to side, and secure it snug to the anchor point in the front corner of the bed. And a flag on the end is always a good idea, even if not required.

You’re right, Steve, the photo is very deceiving. It sticks out only 11 inches to the side, and 14 inches behind the truck. I bungee it in the front, and now I bungee it down against the gate. I’ll get some nice foam.

I like the tailgate-down idea, and I’d do that (and build some nice, cushy supports), but then it would stick out when the truck is in the garage. I have this fear that I’d close the garage door absentmindedly. Even with the safety reverse, I’m pretty sure it would destroy the kayak. :o

Straps or rope are preferable to bungies. Bungies can break and they get weaker with exposure to heat and UV. I don’t know anyone who uses bungies to secure kayaks.

Kayaks can also be carried in a pickup by flipping them upside down and lifting the bow up onto the back of the cab, with cushioning under it and a way to securely tie – the stern goes in the bed wedged against the tailgate and also securely tied in place. Like this.

Do a Google images search on “kayak in back of pickup truck” and you will see numerous options.

It might be a good idea to unload the boat out of the truck before putting the truck in the garage. I can think of too many bad things that might happen to the boat and possibly the truck if you have a little distraction sometime.

And get rid of those bungees. Strap or rope like someone already said.

I am both a paddler and a bicyclist. The paddlers have covered the mechanical aspects of what you are doing. I’d like to suggest that when passing a bicyclist on a narrow road the bow of that boat would graze his left ear. No one would be happy about that.

@PianoAl said:
I like the tailgate-down idea, and I’d do that (and build some nice, cushy supports), but then it would stick out when the truck is in the garage. I have this fear that I’d close the garage door absentmindedly. Even with the safety reverse, I’m pretty sure it would destroy the kayak. :o

Place something else in the bed, next to the kayak. Make sure that this “something else” is higher than the kayak and reaches at least as far behind the car as the kayak does. Then your garage door will hit that instead.

As pointed out by pgeorg, the consequences of absentmindedly driving too close to a bicycle or pedestrian can be much worse.

Found a solution: I now back the truck into the garage. That way, I can use the tailgate-down method with no worries of guillotining the kayak. 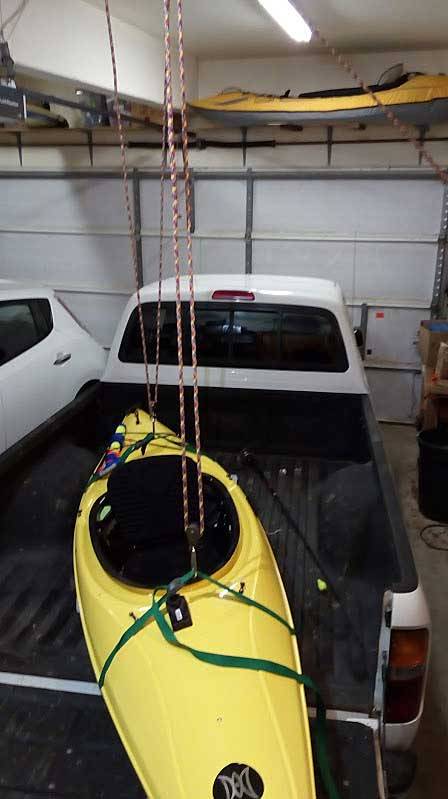 This is a big improvement for hoisting it the the ceiling, since I can do it with the garage door open.

I strap it in securely, and have a red flag on it even though it doesn’t stick out far enough to require it.

Now I want to carpet the bed of the truck.

Done worse myself. Most of the time, however, had a cap on the truck that centered the boat, or a bed extender that I tied to. Also had a peg in the peg hole in the corner of the bed at one point to keep it from sliding more sideways.

Most dangerioue was probably driving with the kayak sticking into the cab through the rear pass through window. Pretty much totaled my truck while carrying it that way, boat luckily did not fly forward (truck luckily did not roll, but the wreck did rip my front axle off).