Outdoor storage for a Thermoformed kayak

I live in a little house and will need to keep my new Thermoformed kayaks outdoors. My thoughts are to attach Suspenz Deluxe Rack brackets Deluxe Kayak Storage Equipment | Canoe Storage Rack | Suspenz either directly to the brick of my house or sink in some 4x4 timber against the brick wall. I do have about a 2 foot overhang of my roof there from the second story. It is also facing north so no direct sun.
Any insights for exterior storage would be greatly appreciated.

I think you have thought it out well, with the overhang and facing north. You still might want to put a tarp over it. My boats get stored on their side or upside down. If you have air bags or pool noodles (extra flotation) you will want to remove or at least deflate it. The first time you go to use the boat hose it out completely (spiders, and other creep crawling things).

I will be using cockpit covers which I hope will help a little. I will be keeping the boats hull up. My next question is covering the skeg opening to keep it clean.

Personally I think a plywood enclosure would be ideal.
You could build a little frame to attach the plywood to, put your boat cradle in that and use outdoor rated plywood and paint it.
I’m actually planning on doing something like that due to the number of boats I need to store.

I use your second option. For the boat with a skeg, I put Gorilla Tape over it. I haven’t used cockpit covers but a squirrel was recently under the tarp . I have a dog and cat in the yard so I don’t think the squirrel will try to nest in a boat.

Do you have any visuals?
I was also thinking of galvanized steel corrugated roofing panels to make an enclosure.

I store my 14-foot thermoform kayak outdoors under a garage overhang. It faces south because my garage is attached to the south side of my home. I do use a cockpit cover, but don’t cover the boat. Just apply 303 to the hull in late fall. I do place a cloth over the skeg, holding it in place with bungee cords.

My only caveat is that thermoform becomes brittle in subzero temps, so I don’t go near it in those conditions. Not that I’d have an easy job of getting to it in the first place. Or want to paddle in subzero temps. 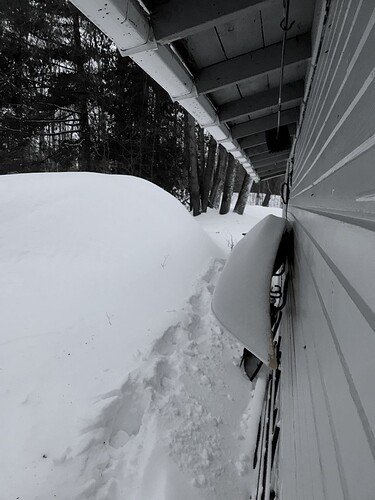 No, it’s something I’ve been thinking of building so no end product to show. Somewhere at home I have a very general sketch.
My longest kayak is an 18’ epic, the others are 17’ plus I would at least like to have my wenonah canoe inside of a covered storage area so I’m still working on the logistics.
Galvanized for the roof isn’t a bad idea. Actually maybe for the walls and just use some 4x4’s and 2x4’s for the frame.

A couple of mothballs keeps the critters away. 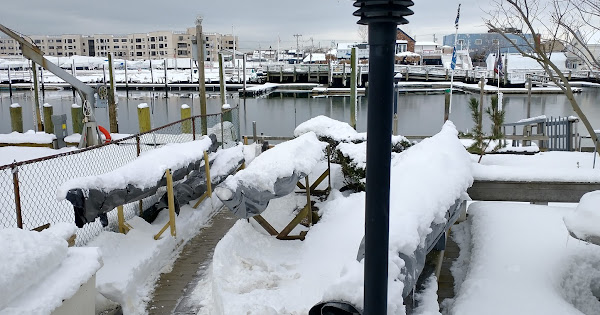 Cockpit covers 18’ x 6’ tarp folded in have on most few bungees. Never a problem. Have two more SOTs hull up in straps with tarps. Also a Eddyline Journey in slings deck up cockpit cover and tarp. Never bothered with covering the skeg. Never had anything in any of them all bone dry. If your boats to long for a 18’ tarp which is actually 17’-8" I put a heavy garbage bag on the end. I put play ball from target on each seat keeps the cockpit cover up and tarp. No puddling.

I’ve got a bow peaking out. Trash bag sounds good.

Does anyone that stores their kayaks outdoors live in an area where temps get down to -40s? I see some snow in these pictures, but not sure about super cold temps.

I’m hoping to buy a kayak this year (and hopefully eventually a second one) and was wondering if I might be able to attach some kayak holders to my wooden fence posts to store them along the fence with tarps over or something? (I also like the idea of building a bit of a plywood shelter, but not sure how my neighbour would feel if I attached that to my side of the fence. . . ?)

There’s an area of the fence beside my house that’s fairly protected and wouldn’t get much sun or wind or anything. . .

Well, a town not too far from me is known for the coldest temp ever recorded in Michigan: -51F.

While that happened way before my time, we have had spells of -20F/-30F. Nothing that bad yet this winter, but cold enough that all the car washes in town are frozen.

HMMMM…I had minus 32 F this morning…minus 25 F yesterday and minus 31 F the morning before… I’ve seen minus 40 f…but not this year …yet.

The Suspenz hangers will work just fine. Space them at the location of any internal bulkheads or about one third in from each end of the kayak. Definitely use a cockpit cover and be sure that the interior of the boat is completely dry before putting it on for extended storage.

Thank you,
Now I am trying to decide weather to attach the bracket directly to the brick of sink in some 4x4 with a big eye bolt sunk into the concrete as a place to lock them too?

I hang my kayaks from my garage ceiling. My friend made standalone racks from pvc as she has no garage.

If I only had a garage, it would be a dream come true.

I have a thermoformed Delta kayak that has to be kept outside. Overnight temperatures have been close to -40 recently so the big thing is not to try moving your kayak in winter temperatures as ABS can shatter if banged in deep cold. I built an 8ft long rack out of 2x4’s and 2x6’s that holds two kayaks and a canoe. The canoe sits on top and the two kayaks are suspended inside the rack on 12 inch wide pieces of rubber cut from a floor mat, I then put pieces of carpeting over the mat for the hulls to rest on as some rubber can cause discolouration of the hull. The whole thing is very sturdy and well supported. Two other points that were mentioned in this thread. Don’t use a tarpaulin to cover your boat as they don’t breath and moisture gets trapped underneath which can cause mold and mildew, a much cheaper option than a dedicated kayak cover are the covers made for car storage, they’re breathable and quite durable also large enough that they can be cut lengthwise and used for two kayaks. Second point is that Delta doesn’t recommend the use of 303 protectant on their thermoformed hulls as it degrades ABS plastics.