Outfits that rent kayaks and canoes on frigid lakes

Somebody on one of the FB paddling groups just posted pics of herself out on Lake Louise (a popular glacier-fed lake in the Canadian Rockies) in a rental canoe, wearing sandals, shorts, teeshirt and horse collar. Even the rental website for the concession there admits that the lake is "a frigid 5 degrees C " (41 F) and states “You don’t want to fall in…” No sh*t. Boggles the mind that their insurers permit this. They even tout taking children on a paddle to the end of the lake (which is below the vast Bow Glacier)!

Then again, the Canadian Rockies are the same place where I have spotted tourists in flip flops with tiny dogs on leashes traipsing over glacier ice-fields riddled with bottomless crevasses. We were on the Columbia Ice-field in full mountaineering kit doing rescue training some years ago when a bunch of such bozos wandered up from the nearby visitor center (ignoring the cautionary signs of course). When one of our instructors strongly cautioned them to get off the ice one of the tourons said “But you guys would rescue me if I fell in a crack, right?” Instructor (who had a thick Scots brogue): “Wrrrrong, mate.” Maybe it’s a natural population control. I do recall that at that time the Canadian Parks rescue services made it clear they would charge for costs anyone that they had to extract who was somewhere they were not supposed to be or if they failed to register at the trailhead. Rescues easily run to 5 figures, even 6 if helicopters are involved.

Full disclosure – in my mid-twenties I stupidly plunged (in a teeshirt and shorts) into one of those lovely blue glacier-fed lakes hoping for a bath during a weeklong backpacking trip in Banff. Instant blinding headache, lung-clenching gasp reflex and I had no control over my muscles. Fortunately it was not over my head and I was somehow able to roughly launch my semi-paralyzed carcass towards the steep rocky bank where I flailed and clawed my way out, choking and sputtering as I involuntarily gulped the icy water. This caused great amusement to my fellow hikers. Took me 15 minutes to stop shivering. I can still remember the shock of that immersion vividly.

Similar event icy lake in southern Indiana. Jumped off the boat. Teenage legs hit the cold water and immediately cramped up, feet to buttox, useless. Fortunately I’m real buoyant and popped up next to the boat. You don’t have to be in glacier fed water.

At some point the Rangers and volunteer rescue outfits are going to pull off charging a stupid tourist for having to pluck them off the top of Mount Marcy on Columbus Day wknd wearing platform shoes and shorts when a snow squall comes in. But until then it’ll probably continue.

I was invited to go water skiing on my first trip to California. Being from Miami I jumped at the chance not realizing that “lakes” out there were really reservoirs full of barely melted snow. I thought my heart stopped when I jumped off the boat…

@Celia said:
At some point the Rangers and volunteer rescue outfits are going to pull off charging a stupid tourist for having to pluck them off the top of Mount Marcy on Columbus Day wknd wearing platform shoes and shorts when a snow squall comes in. But until then it’ll probably continue.

Sleeping Bear Dunes National Lakeshore is doing just that to those who disregard the warnings, climb down its steepest dune and then can’t climb back up. Two thousand bucks per rescue.

I have watched that at Lake Louise in person. The livery is next to the Chateau and rents to people wearing anything. They are irresponsible in my view… They also charge $35 ( 2017) for half an hour. This is a sanctioned concessionaire. We took our boats to Maligne Lake… No livery… We met paddlers in drysuits…
I had no desire to paddle Lake Louise with the crowds of ill prepared paddlers on the lake.
Charge for rescue: Yes the State of New Hampshire has been doing that for years if it turns out you are unprepared and caused your own accident.

I was tossed in a pool in New Orleans during Mardi Gras. It was a rare 10° that day. I have felt your pain.

The question arises …You were at Mardi Gras … and felt any pain??? HMMM…

It was a wild couple of days. I remember wanting out of that water and my feet almost too numb to climb the pool ladder.

I remember snow flurries in New Orleans but not much else…

Perhaps the “don’t enter this area without proper equipment and training” signs should include the cost that those who ignore those warnings will be compelled to pay for a rescue.

When a friend and I rented kayaks on Lake Tahoe a couple of years ago the outfitter would have required me to demonstrate self rescue if I wanted to take out a SINK which was reasonable enough. Since we did not have immersion clothing with us and we planned to stay in the shallows along the shore so my companion could shoot photos, we opted for a SOT tandem. Though Tahoe is notoriously cold (and the second deepest lake in the US), around the granite and sand lined perimeter during the warm and dead calm weather when we were there it was probably close to 80 F when I waded out to launch. We stayed within 50 feet of the shore the whole day but I would stick my hand and forearm in deep as we moved around the lake to check for colder water and stayed where we could see the sunlight reflecting off the bottom. 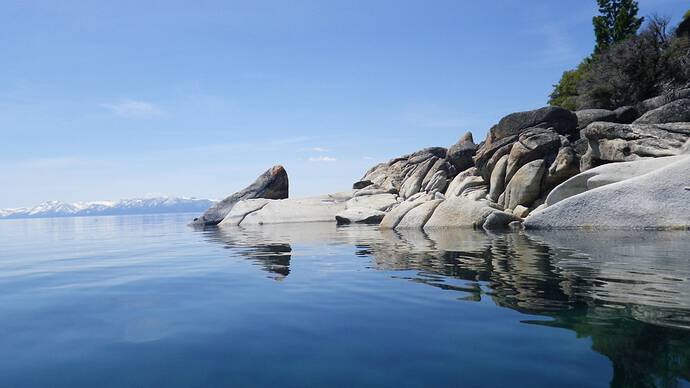 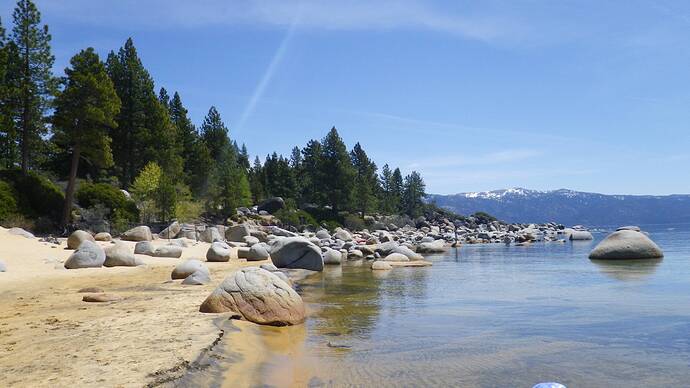 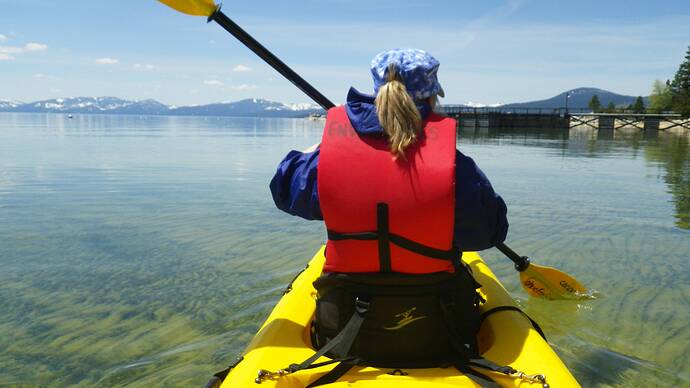 @willowleaf said:
Perhaps the “don’t enter this area without proper equipment and training” signs should include the cost that those who ignore those warnings will be compelled to pay for a rescue.

THIS would help for sure. It would not stop all fools but fewer would take such risks.

I wish all rescues in CO got billed to the rescuees. This year alone, at least 20 water rescues (some in which people died) were performed, mostly for stoopit toobers and floatie toy dorks, plus a couple of people trying to drive Jeeps across rivers.

Shallow edges + clear water + sunshine = much warmer water than if any of those is missing.

Guess I’m not the only paddler who intermittently sticks hands in the water to feel the different temperatures!

I’ve got long arms so my hands naturally get in the water.

Using a Greenland paddle most of the time means I am in near constant contact with some of the water (like it or not). But I still submerge my wrist as far as I can reach periodically on waters that might have a thermal shift that could be an immersion risk.

Had a similar experience (with deep water that is usually cold being surprisingly warm) when I was up at the Saguenay Fjord in Quebec a few years ago this month. The fjord (which feeds into the northern reaches of the Ste. Lawrence River) . Surface water temps average 60 to 68 during the summer months and paddlers are informed that “an isothermal suit is a must” on the 900’ deep river. All of the whale watching kayak tour outfitters up there provide dry suits to the clients they take out and require them for individuals renting their kayaks to paddle in the fjord, either their own or rented.

But when we were there the weather was hot and very rainy (in the mid 80’s and 12 hours of steady rain every night) and when we checked the conditions, the fjord felt like warm bath water, even 100 feet offshore. Unlike Tahoe, this is water that deepens quickly off shore and much of is walled off by steep granite cliffs, so not much solar heating outside of the bays. But we paddled in hydroskins and were fine. I figured that heavy rains every day must have had something to do with warming the surface – that lighter warm fresh rain water would sit in a layer atop the Atlantic salt water. Saguenay Fjord is 93% salt water but what we were paddling in did not taste strongly saline.

@willowleaf said:
Using a Greenland paddle most of the time means I am in near constant contact with some of the water (like it or not). But I still submerge my wrist as far as I can reach periodically on waters that might have a thermal shift that could be an immersion risk.

Paddle down here today in the 107 “feels like” conditions and you’ll be like me. Put gloved hand in water so you can squeeze water on shirt for cooling.

@Overstreet said:
Paddle down here today in the 107 “feels like” conditions

yeah, bad day to do my monthly ‘Cumberland’.
Last several hours, every 30 minutes had to ‘dip’ myself in the water, the light west wind kept me ‘slightly’ cooler.

We got a nice break in the heat and thunderstorms today – only gonna be 81F, 40% humidity with no rain and sunny skies. Heading to a nearby lake with the new solo canoe as soon as I finish lunch.

@raisins said:
yeah, bad day to do my monthly ‘Cumberland’.
Last several hours, every 30 minutes had to ‘dip’ myself in the water, the light west wind kept me ‘slightly’ cooler.

Somewhere on the Paddling .com home page it says that side skulling is the most important beginner skill… they don’t say to get into or out of a Greenland Rest Position. I can just see a fishing boat coming up seeing you doing that. …… and not knowing what was going on.