Paddle bags, how do you transport your paddle?

As a newbie I am curious how you transport your paddle. We invested a good bit and was wondering if many of you use something like the NRS paddle bag. NRS Two-Piece Kayak Paddle Bag | NRS

Or do you just throw it in the back of your Wagon or SUV?

Do I just have too much time on my hands as I wait for my Kayak to be delivered?

I have a bag for my wife’s kayak paddle (for no particularly great reason other than she wanted one) , but my canoe paddles just go in the back of the car.

Paddles can be expensive, so do whatever makes you comfortable

You can protect the paddle blades by slipping them into padded shipping envelopes (the bubble wrap type that UPS, Fedex and USPS give away).

I’m still a little new to this but have been around large power boats my whole life. With big boats you just have everything stashed in the boat and hook it to the car and go. I’m finding with paddling there are lots of bits to move around and before after and during.

I’m trying to keep my gear together both protected and so I don’t forget something and when I get to the water I minimize my trips back and forth to the car before setting out.

My plan is to break the paddles down and put them inside a draw bag along with other stuff. I have a bunch of army surplus waterproof laundry sacks that make nice storage for such stuff and I only pay about 3 bucks each for them. Likely the two paddles and two PFDs will go in one bag together.

I like the case idea but I’m too cheap to buy one.

Bud, I agree with you, if that case was cheap I would already have one.

I just put the paddle in the car after making sure it doesn’t have sand or mud stuck to it. Paddles fit inside my old no-bulkhead boats so they were stored and car topped there. I did manage to forget the paddles once, now I keep a list posted on the wall of the things I need to bring.

I put mine in the floor of the back seat. In the rare event they are in someone else’s car , I have a fleece bag my wife made.

Being that I don’t have talent for sewing I let Seals take care of that. Works for two 2pc. paddles.

The blue woven plastic IKEA bags seem to be quite popular with the sea kayak crowd. Indestructible, waterproof and if it gets dirty just hose it off. They are $1.50 each. I ordered 4 online and with shipping it was still less than $12. Makes carrying all of my gear to and from the car much easier.

I thought about paddle bags but don’t see how it’s worth the money unless you have a wooden paddle. My carbon Werner paddle is pretty tough. Also, I mostly paddle in salt water, so unless I can wash the paddle off before driving home, I wouldn’t want to put a salty paddle into the bag. So it would only be useable on the way to paddling, not the way back.

I’ve sewn bags for my paddles. For my kayak paddles, I use fleece drawstring bags that have an internal divider. I have a similar setup for my canoe paddles, but the bags have a little padding. I’ve only got a few bucks in materials in each bag.

Are they necessary? Of course not. My paddles are all pretty tough as well, but at $300+ for my ZREs and more than that for my Werners, I don’t mind the little extra protection. The bags are also really nice with the kayak paddles in that they keep the two halves together, making loading and unloading the vehicle easier.

I bought two paddles from Wenonah a couple of years ago on a closeout deal and they threw in a sweet paddle bag. It is designed for 2 but it will hold about 4. Before that I never used anything and I broke couple of paddles due to stuff falling on them in the back of the truck. Now I keep them behind the seat in their bag.

We have paddle bags but don’t use them We have two piece carbon fiber Werner paddles. We just throw them in the cockpits and use a cockpit cover when transporting the boats. They pretty much live in the boats. Almost all of my other gear being actively used goes in a large nylon mesh bag with zippers, carry handles, and shoulder strap. My wife uses Ikea bags.

My sister made simple two pocket paddle protectors for me a few years ago out of some felt she had laying around. It took her less than an hour from measuring/planning to having them ready for use. They work great and protect the blades during car trips !!

Here are some photos. 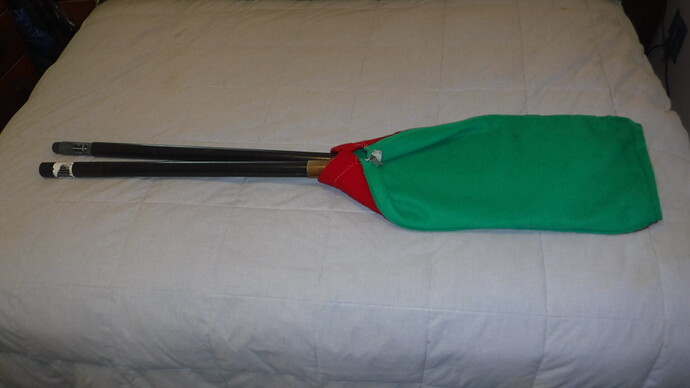 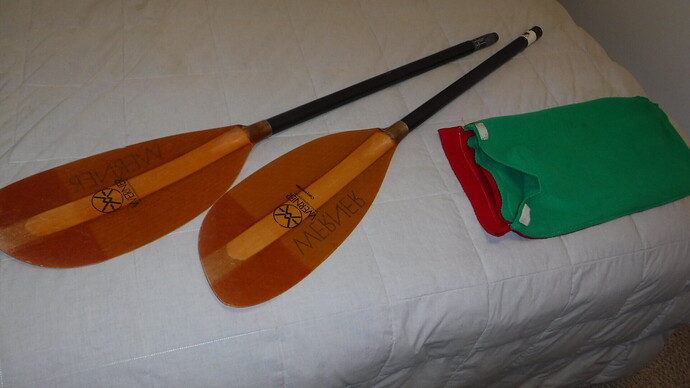 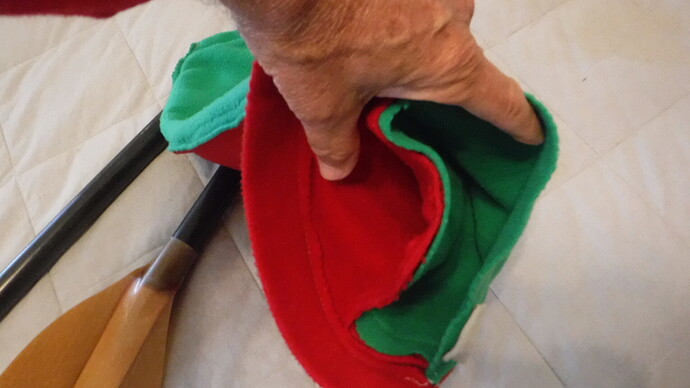 PS: She intentionally chose the colors for a navigational theme.

I have an Epic wing paddle that came with a case, and I use it when I take that paddle. Mostly I use a greenland and I just find a way to fit it in the truck. I use a regualr two piece for my backup paddle and it just gets stuck in the truck however it fits.

I’ve got some nice paddles. I cannot imagine anything happening to them while transporting that’s worse than what they will experience during use. A paddle bag would stop a few scratches? Maybe a chipped edge?
I don’t exclusively paddle deep waters, so the scars are part of the scenery. Yes, the bottom of my boats also show the evidence of being well loved.

In addition to a couple of those nice zippered paddle bags, I also have some Knit Gun/Rifle Socks that are good for inexpensive basic protection and hold a couple of paddles each. Great for the two halves of a kayak paddle together in one sock, and was only about $5 at a big box retailer.

I don’t so much “throw” our 2-piece Werner Cyprus paddles in the back of the SUV but I “place” them in there along with the PFDs, etc.

If we’re going on a long trip and we need the space in the SUV I’ll put the paddles in the kayaks and use a cockpit cover on each. The one-piece Greenland paddles are a bit more cumbersome and can really only go between the car seats.

I have a paddle bag that happens to be from Seals which holds two splits. I believe NRS has one too. I don’t recommend bothering with a single-paddle bag but then again I have seen an awful lot of newer paddlers go out without a spare. Once you get properly fitted out, the only one that is convenient is one that holds two splits. Felt if you have GPs, to protect the tips.

I usually try to pack the splits before driving away from the launch, because it makes it easier to move stuff back into the basement when I get home. But not always.

Used to walk my giant Newfoundland dog a few miles to kayak moored at dock, so carrying the paddles in the NRS bag was perfect. Still use the bag to protect paddles in car / cargo trailer. Kayak with my Newf and need to avoid his stepping on gear. Bag comes with good shoulder strap. Glad I have this bag.

I just upgraded to an adjustable Bending Branches 240-255cm for my new Swift K15 solo.

Looked at bags but not willing to shell out $100. Got thinking about rifle cases but too short.

Then I found a shotgun soft case on Amazon for $17.

It just fit the take downs but zipper closed and it’s cheap.