I just bought a brand new Old Town Loon 120 and discovered the paddle clip won’t work with my greenland paddle so, I figured out a way to make it work and I made a short video of the mod. Hopefully, it will help someone else with the same issue. https://www.youtube.com/watch?v=AwFeMsTOQ68&feature=youtu.be

Have you ever seen a Greenland paddler use a paddle clip?

Yup! About two hours ago while I was getting my Gatorade and donut sticks out for a drink and snack!

Also while I was porting my kayak to the truck. Nice to have a spot to hold it while carrying.

It’s a pretty safe bet that most GP users are in longer boats with deck rigging that will conveniently and securely stow a paddle. It’s so easy to do that there’s no point in clips or leashes.

OTOH, the 12’ Loon in the video, with its enormous cockpit, doesn’t have a long enough foredeck to stow a 7’ GP, nor does the deck rigging look particularly useful for that function. So your only resort is a leash or paddle clip if you want to be able to use both hands, unencumbered.

Yeah, I’m not sure what you could actually use the deck rigging for? I found the clip very handy several times! For just accessing the dash container I just set the paddle across the cockpit. I have a leash on my sea kayak for the paddle but, not sure if I’ll put one on this one.

I find your question very confusing if you have a sea kayak. The static line is to hold onto the boat for an on water self rescue. The bungies are for spare paddles, charts, pump, a dry case with my cell phone on it for ex. Do you paddle on the ocean without this kind of stuff?

Celia, if you look up the Loon 120 online, you’ll see that the deck rigging doesn’t look like what you expect on a sea kayak. The foredeck rigging looks rather bizarre, with lines in curved grooves.

The foredeck rigging looks rather bizarre, with lines in curved grooves.

Or there just isn’t any rigging.

I don’t expect a Look to have useful rigging, certainly my sister’s didn’t.
What had me confused was the oper seemed to indicate in a post within this thread that they also paddled a sea kayak at times. Which does have useful rigging.

Or the sea kayak mention is not really something.

Celia, I’m not sure what question you are referring to? I didn’t ask any questions that I’m aware of. Yes, I have a Necky Looksha 17’ 4" kayak as well as the Loon 120. The reason I bought the Loon is the deck is too low on the Necky and my knees and hips hurt over extended periods. The Loon has the open cockpit and that allows me to bend my knees to a more comfortable position so I can paddle longer more happily. Yes, the deck rigging is in curved grooves which pretty much renders them useless once you pull them out of the grooves due to the length of the cords. They don’t sit snug against the deck when out of the grooves. On my Necky, I have a paddle leash but, the places I’ve been going I’ve not needed to stow the paddle as I’m either paddling or chilling with the paddle across the cockpit. I’m usually either on the Clinch River in this section https://paddling.com/paddle/trips/clinch-river-virginia/ or on the South Fork of the Holston River. Another reason for getting the Loon is the Necky is a little slow at negotiating a couple of the curved rapids on that section of the Clinch. I never realized my video and thoughts would cause such a stir! I just thought I would offer a helpful idea for anyone in the same situation as I was. I feel my use of a greenland paddle in a Loon is apparently the kayaking equivalent of wearing white after Labor Day in Manhattan!

I use Greenland paddles most of the time. I really like the option that Venture uses on their touring kayaks for paddle retention. They have a short (maybe 12") piece of bungee running along just above and parallel to the right hand gunwale just ahead of the coaming and a small metal hook (like the hooks for hiking boot laces) about 4" inboard from the center of the bungee. I just lay the paddle along the gunwale between the bungee and hook and stretch the bungee to the left and slip it over the hook. Keeps the paddle snug and close at hand whether in the boat or carrying it.

The hook is like these, available from sources that sell kayak deck rigging repair parts: 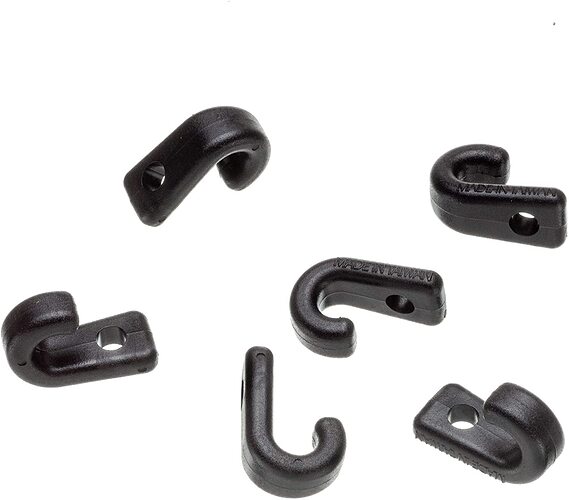 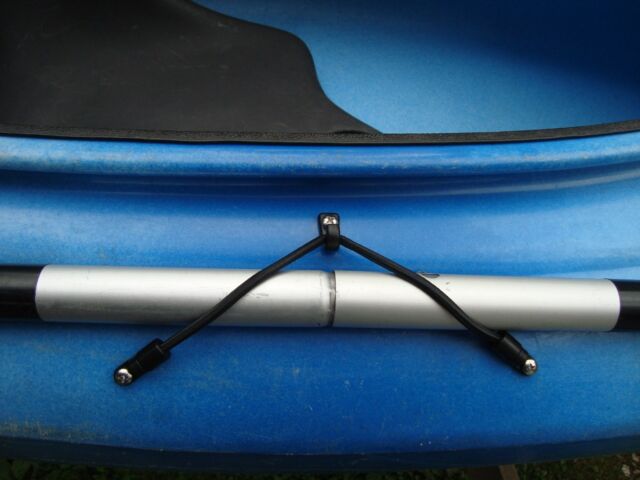 Yes, the deck rigging is in curved grooves which pretty much renders them useless once you pull them out of the grooves due to the length of the cords.

I am curious. What is Old Town’s intended usage of that rigging?

They obviously went through some effort to design it that way, as opposed to normal sea kayak bungees, but I have trouble imagining a use case for it.

Maybe they expect you to store an inflated paddle float on the foredeck.

It’s a really bizarre design that seems to make no sense whatsoever and I couldn’t find any clues to their intent online.

You said “Yeah, I’m not sure what you could actually use the deck rigging for? I found the clip very handy several times! …”

I think the exchange got confused when Spellcheck changed Celia’s observation on the Loon to “Look” which made it sound like the Looksha was involved.

I had a comically confusing exchange a few years ago when I was doing a Spring basement purge and had multiple items listed both on Craigslist for sale and Freecycle for free. I’d had several email requests to see things and shared my cell number with respondents. One guy texted me that it wanted to come at 2:00 to check out the boats (I had two older RM kayaks for sale). When I met him on the front porch and took him to the back yard he seemed a little puzzled when I stopped in front of the kayaks dsiplayed on the grass and started enthusiastically describing their various traits. To his credit he politely listened to my entire spiel until I asked him which one he thought he might want. Turned out he was there to pick up the free BOARDS that I had salvaged from an old built in bookcase and posted on FreeCycle. iPhone had transcribed his input typo to “boats”.

Similar “Who’s on first?” incident last week as I was waiting by my new motorhome out on the street for a guy named John (whom I only knew from a Facebook group) to come pick up a mattress in the van that I was giving away. A fellow the right age pulled up on a motorcycle and stopped, complimenting me on the vehicle. “Are you John?” I asked. “Yes” he replied. He gave me a blank look when I expressed surprise that he had not brought a vehicle and muttered that I had not expected that I would have to drive the RV to his house to deliver the mattress. I don’t think he really heard exactly what I was saying (the bike was still rumbling) and we continued to have a puzzling exchange for a couple of minutes about the problem of turning the RV around at the end of my dead end block until a pickup truck pulled up alongside us with the “real” John in it and I realized what the kerfluffel was. Turned out motorcycle John was a neighbor I had never seen before without his helmet on. We had a chuckle about the mistaken identity, which reminded me of the recurrent similar themes on the old “Frasier” sit-com.

Willowleaf 's bungee triangle will not catch things like the plastic clip will. I have them on a couple of boats.

Oddly enough, from my end I knew immediately “look” was an autocorrect. I see so many odd corrections in texts these days. That’s a pretty nifty little bungee set-up. I really like my clip. The only time it’s an issue is when loading it in the cradles. I have to lift it slightly to clear but, no biggie. As for the reasoning behind some of the loon’s features…no effin clue! There is no manual. I realize it’s not a Swiss watch but, still there should be something to let you know what it’s got and how to use it! The seat actually has printed instructions on it and a link to a video which is nice but, there’s a drain plug under the carry handle that you can barely see on the red boat and I knew it had one but, took me a while to find it! The workdeck has a track for mounting cameras or whatever devices you desire but, there is no mention of exactly what to use to attach things WITH! I finally figured out it’s just a T-track and I’ve ordered some T-bolts and knobs and other items to mount my gopro. On the site there are several features of the boat that next to their title say “not pictured”. How stupid is that!? Hey! Check out our awesome new boat! It’s got some great features! No, you can’t see them. No, there’s no description of them. No, there is no instruction manual. No soup for you! Despite these irritations, I do like the boat. I haven’t decided if I want to keep my Necky or sell it yet. I’ll need more time with the Loon to see how much I’ll use it.

Willowleaf, I work with a Katherine and a Brandon. I graduated with a Katherine and Brandon and am still in touch with both. I got a text from Katherine saying Brandon was down and would I go with her to hang out with him. She asked if it was ok if she brought the dogs. I said sure even though I wasn’t really in the mood for it. I try to be there for my friends. I got the feeling Brandon might not know I was coming and didn’t want to arrive uninvited so, I texted him and asked if he cared if I came with Katherine. He said sure. I replied I just wanted to make sure she had run it by him first. He called me and asked what the hell I was talking about. At this point, my then girlfriend said, are you sure it’s the right Katherine? I looked at my phone and realized it wasn’t! So much confusion.