Does anyone use a paddle leash? Pros? Cons? If you do use one, where would you recommend connecting it? We are only using our kayaks for calm water, but as noobs, it would be a problem if we lost them. LOL. Thoughts?

Please do a search…the topic has been discussed multiple times within the past couple years.

That’s always a great debate. The most common reason that people have for not using them is that they might pose an entanglement issue. They’re never used in whitewater and I would probably not use them in a surf zone where you could be tumbled. However, I use one and in years of teaching wet exits and rescues with sea kayaks, have never personally seen an entanglement with a paddle leash or heard first hand of one. I am sure that an entanglement could occur, but it would seem that it’s very rare.

I use a coiled type leash fastened to my paddle and a bungeed onto the front deck. I figure that as long as I am holding onto the paddle or boat, I have both. It’s useful if I want to have my hands free to do a rescue or anything else. I can just toss the paddle over the side. Some people prefer to have the paddle tethered to themselves instead of the boat.

Yep, use one until it becomes a PITA.
I did… It didn’t take long at all…

When I am fishing, I usually use my tow belt to leash the paddle instead of using a leash.

After you start collecting gear (as most of us do), you will end up with extra paddles. Bring one as a spare and that does the same job as leashing the paddle.

I tried using them as paddle leashes. Somehow, they didn’t seem necessary.

Since then, however, they have been re-purposed as tab-locking foot pedal return springs.

Secured one end aft, under the coaming, and out of the way. Looped the other end to the foot pedal’s slider-end. When the locking tab is raised, the leash pulls the pedal fully aft (or until it reaches the foot). Or if needed, just use the foot to push the pedal forward, against spring tension, to a new position until it feels right (for the moment). Then, lower the lock lever to hold the pedal in place.

I use one all the time and like it. Coil leash is attached to my pfd, calf leash attaches to boat. I have basically never has issues with entanglement.

I use one because I am often alone offshore with no backup paddle. Also I like being able to forget about my paddle when I remount. Last, it’s nice to be able to set my paddle down to relax or to deal with other issues and not worry about it. I often seek out large off shore waves so the more everything is attached to me, the better. But even when in the harbor, I’m am ATGATT guy (all the gear all the time).

This only applies to kayak paddles of course, never a canoe paddle. 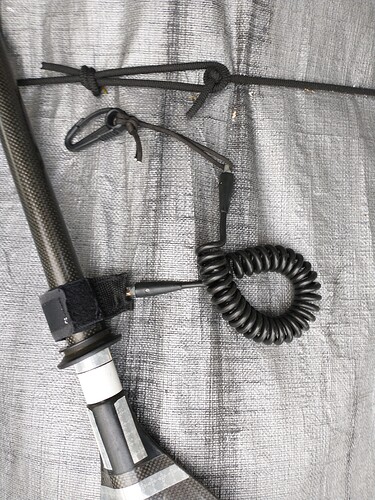 I tuck the coil under a deck bungee to adjust the length so there’s no noise.

Except if you hold on to your paddle you’ll still have a kayak. If you lose both the boat won’t blow away as fast unless the current takes both of them. 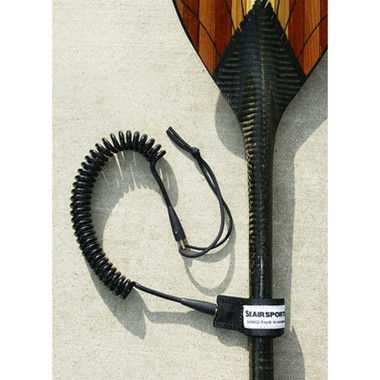 The Coiled Paddle Leash from Danuu / Seairsports has a 2" Velcro closure for attaching to your paddle and a tie line to attach to your boat. The 5/16" polyethylene leash that stretches out to eight feet but remains compact when not stretched.

Have you capsized, rolled or wet exited in conditions? That’s where entanglement can become an issue, if it becomes an issue.

Hmm, maybe. Will the leash hold if you’re out of the boat in breaking 6 foot 4 second waves?

I surfski so rolling and wet exiting is not possible. Capsizes happen all the time (usually intentionally, though unintentionally every couple-few paddles as I chase large and steep waves). Still no issues with entanglement.

Rolling I could see where an issue could develop. Wet exits and capsizes should just be ‘normal’ though (as in they’re no big deal because you have practiced what to do).

And if you’re in 6 foot 4 second breaking waves your decision making failed long before the leash. those are untennable conditions, even in my book which is fairly extreme-tolerant (for reference 6 foot 6 second non-breaking sounds like a ripping good time though! A dream downwind day)

Glad you clarified that you surfski. My point about wet exits and capsizes isn’t that they will entangle you, but that they leave you in position to get tangled if the conditions are that bad.

While I don’t recommend going out in those stated conditions for most people, they do happen on Lake Superior and I wouldn’t want any leashes around me when they do. YMMV of course.

As above search this topic. But for a quick response now - I found the coiled cord things to be noisy and annoying, I always have a wrist leash coiled on my paddle. It hangs onto the paddle OK in rescues or for dropping it for a photo. Learn to always hang onto your paddle in a capsize. And carry a spare so you can always rip one off your deck if the first is lost or fails.

I found the coiled cord things to be noisy

Yes, every time the hard coil touches the deck of the kayak, it makes a clunking sound. That’s every paddle stroke if you attach it to a deck cord. I use a leash, but prefer the silent bungee type.

My tether is attached to the front most deck bungee. I tuck a loop of the coiled type cord under the deck bungee closest to me so the cord does not hit the deck when paddling. The loop is easily pulled free if need be.

I’m not out in that type of water. Over my pay grade and skill set. I also carry a knife. If it wraps around my neck like thread on a spool

god was calling me I guess.

I provided entertainment at take outs due to the paddle leash getting tangled with my feet. Lots of falling into the water. Dosen’t take much.

Fishing …going minimalist I’d tie a leash to paddle then use paddle a stake out pole and jam it into silty mud at base of a tidal flat during falling tide.