I bought a GearLab 200 cm Aukaneck (surf) Greenland style paddle almost 2 years ago. (The Aukaneck is on the far right, next to the GearLab 210 cm Akiak, which is next to a 20 year old hand carved 216 cm cedar GP.) 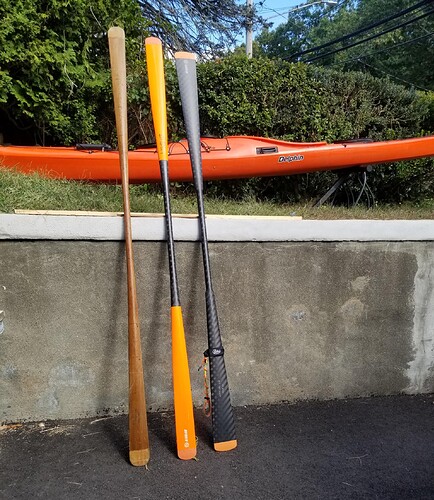 I finally got the paddle out on the water for a bit of play and testing to day. MassBay beaches had 3-4’, 6-7 second wind waves coming in. To mushy for good waveski rides but certainly Ok to catch with a longboat. 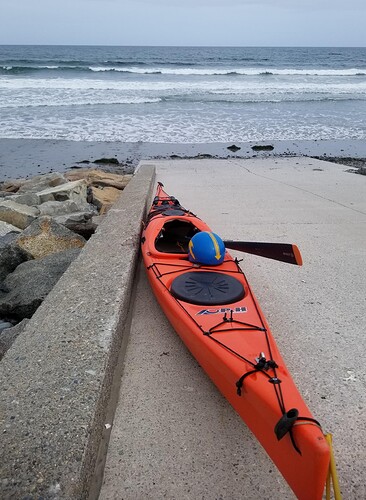 Too bad, the Aukuneck has been discontinued by GearLab… I think there is niche for this paddle. I like the bigger “grab” afforded by the wider Aukaneck blade (about 4" at the tip, compared to the 3.5" of my other GPs). I like this ability for faster acceleration as I am used to Euro WW blades for surfing. I didn’t care much for the shoulders on the Aukaneck. I am much more used to shoulderless GPs which allow for smooth shifting of the grip up and down the loom and tapered blade. I am sure I can get used to Aukaneck’s shoulders. But, today, it was just one more thing to be conscious of us as I relearned that the edging of the long boat is opposite of what I would/should do on a waveski (outside edge vs inside edge) to effect carved turn.

Interesting, thanks. I’m a GP newb, but really like my Gearlab Oyashio, also discontinued. I once saw an Aukaneck for sale used on Craigslist, and wondered about its more aggressive shape. Also love the picture of the three paddles together.

Cool! Wonder how a paddle like that would perform for the WW folks. The GP is such a good rolling tool and WW folks REALLY need a reliable roll. Some years back a local WW guy was in a ‘roll or die’ situation and he died. He got entangled in a submerged root ball after several failed roll attempts.

With 3’ short period waves still rolling in this AM, I was able to squeeze in another long boat surf session. Glad I did, as I was able to work on some of the carve control issues I noticed/experienced yesterday in reacquainting myself with long boat surfing. Also, added on my time using and getting familiar with the Aukaneck GP. 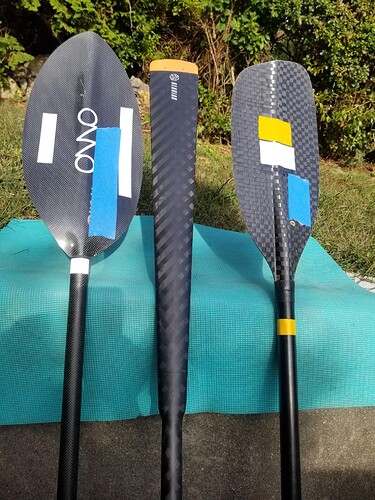 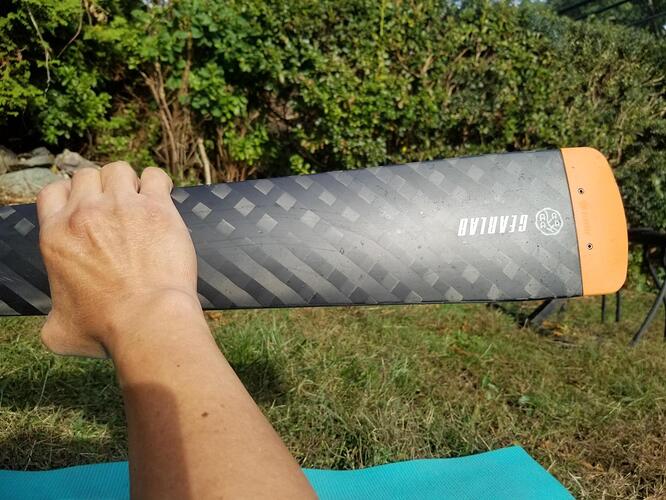 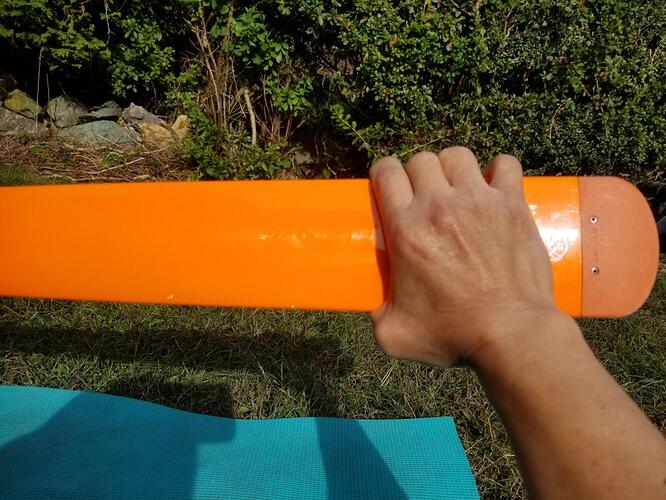 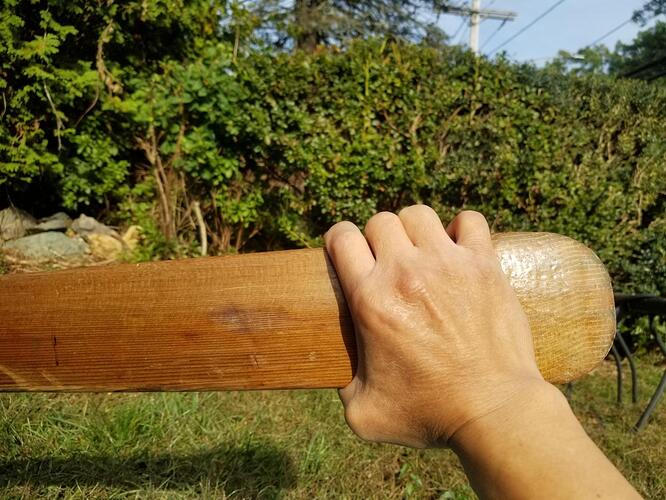 For those who rely (perhaps too much) on the length and buoyancy of the traditional GP to leverage their roll, you may encouter some difficulties. This includes not being able to slide your inboard hand all the way to the end of the Aukaneck blade and also for the relatively less buoyancy of the Aukaneck paddle. The Aukaneck blade has less cross section than the Akiak and even less so than my hand carved cedar GP. The Aukaneck blade edge at the tip is less than an 1/8" and feels (uncomfortably) sharp to the hand grip (like one would feel with a carbon Euro blade). The Akiak blade edge is a rounded 1/8" and feels more comfortable than the Aukaneck, but less so than my cedar GP with has a rounded 1/4" edge at the tip. Of course, the “sharper” edge and wide rblade of the Aukaneck are what make it feel a bit more familar to paddlers used to Euro paddles.

As for the possible usage of the Aukaneck in WW, especially to help with increasing rolling reliability with an extended paddle sweep, I think it’s a compromised approach. A lot of class II plus ww is through technical boulder studded runs. An extended paddle sweep may not be possible because of rocky obstructions. In my experience with WW capsizes, unlike surfing capsizes, I often found myself upside down with boat pushed against a boulder. Best to have a roll on both sides and to be able do it with a regular grip. In these situations, good body mechanics are more important and reliable than the extended leverage of a paddle. Just my opinion/experience.

To add to what Sing said, GPs are not good in shallow water, as it prevents you from immersing the entire blade and can drastically reduce the bite of the paddle. That’s likely to be a common scenario in WW.

GPs are not good in shallow water

That’s a good point. I’ve been tinkering with the thought of getting a GP but yes, a fair amount of my paddling is in shallower water.

Interesting to me at least, I’m drawn by the carbon fiber versions. The melding of indigenous traditional design with modern materials I find mesmerizing. I like many of the laminated wood paddles too but, something about carbon fiber is my “shiny object.”

I may still get one but will have to justify the cost versus not as much use as I might expect depending where I go with it.

Shallow water is fine, as long as you’re not likely going to bash it into boulders and rocks. This more likely in ww than in flatter paddling venues.

If you are just thinking about getting and trying out a GP, I would recommend getting a cedar one first. The cedar version is more durable and gives you more of the “advantages” that GP afficianados talk/rave about. My cedar GP above is 20 years or more old. I take that out with my fishing SOT quite a bit. I like that it floats and I can drop it onto the water, attached by the leash, while I haul a fish in.

My experience with carbon paddles (I have a had a few over the years) is that they are very light and you pay a premium for that lightness. But, for the paddling venues that I like – surf and WW – I have had to do a bit of composite repair work when edges or paddle blades get cracked. I find carbon fiber more fragile than my fiber glass paddles.

I should have been more specific and said that GPs are not good in shallow water in tight confines. In open water, where you can lower your paddle stroke to help immerse the blade completely, they work fine.

When it’s shallow and tight enough that you have to keep the paddle near vertical, you lose a lot of blade area in the water and consequently, have little bite on it. I’ve dealt with it in rock gardens and sea caves and if you really need to move the boat, it’s problematic. Although I don’t paddle WW, I can envision similar scenarios occurring.