Have you checked with Confluence? They own MR.

usually those last digits on the end of the serial# signify the year of manufacture, meaning yours was probably built in 1984

Too wide for a solo, too narrow for the Winooski model unless its been modified though the length is close. A picture would sure help. 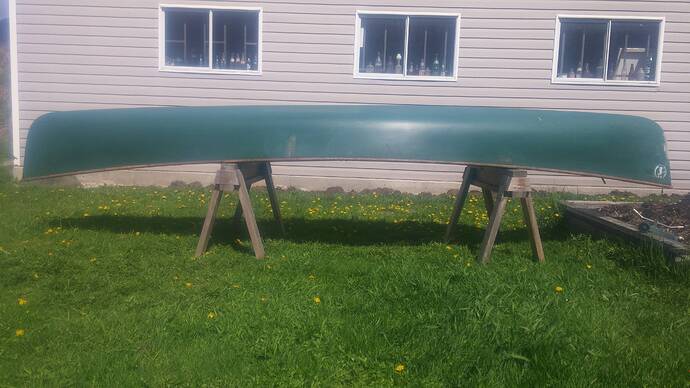 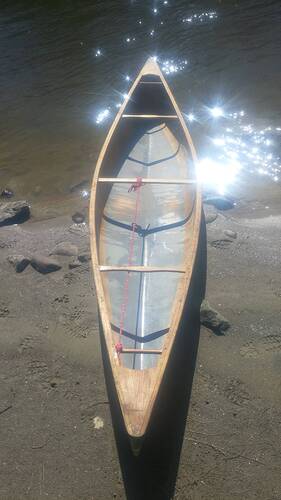 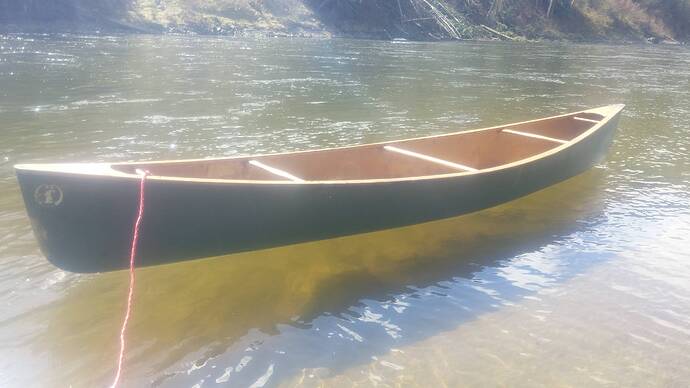 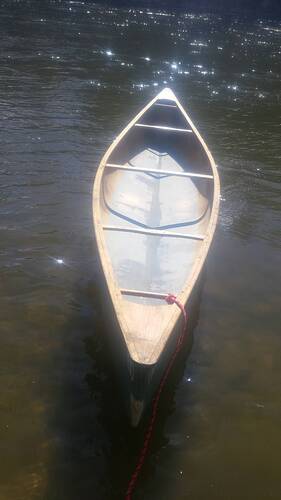 Here are some pictures!

I don’t believe it is wide enough for a Winooski. Here are photo’s of my tape. The shell’s beam 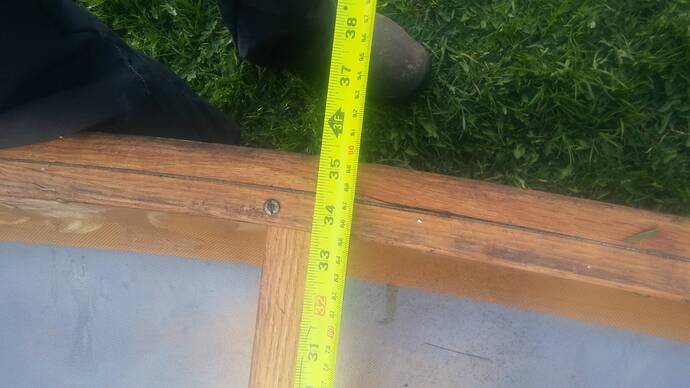 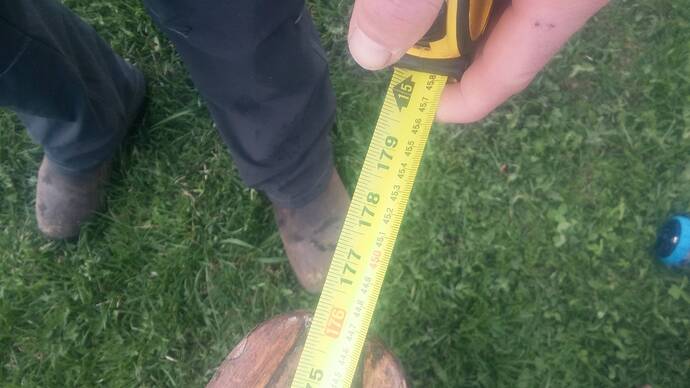 Looks like a short Explorer. Did they make an Explorer 15? Nice little boat!

must be one of these? https://madrivercanoe.com/us/sites/default/files/Mad%20River%20Boat%20History.pdf

Thanks guys. I have messaged a Confluence rep.

Possibly a Courier. I don’t remember if they had as much rocker as in the 1st photo. 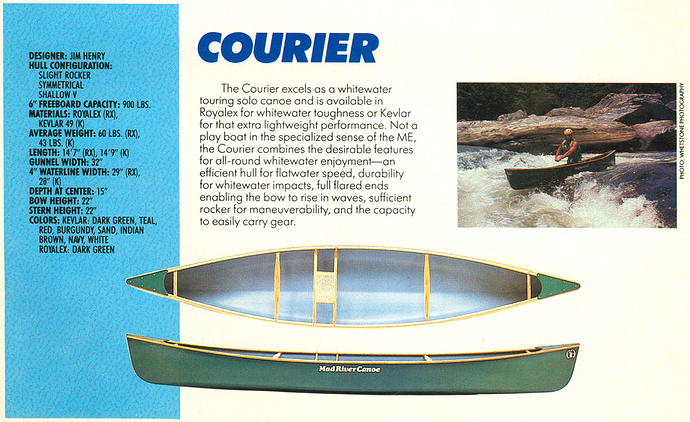 It is posible. The canoe has sustained some significant damage over the years. There is a serious looking patch job on the bow and four patches where the original thwarts were. The damage and subsequent repairs may have distorted the original dimentions a bit so it is possible that it used to be narrower.

So, after reading a thread about someone purchasing a MR Slipper without thwarts and that they were able to pull the gunnels into shape… I decided to give this canoe a squeeze. The following are pictures of the alterations. After I cranked on 4 tie down straps, trimmed and then reinstalled the thwarts I was pleasantly surprised. It is now a more realistic solo canoe. I realize that I may have overdone the narrowing, but I didn’t want to stop at a 32" beam. Cannonball, I suspect it is a Courier, but I have not heard back regarding the serial # from Confluence 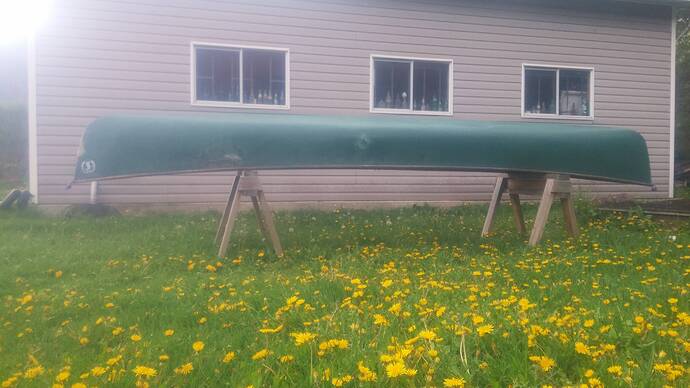 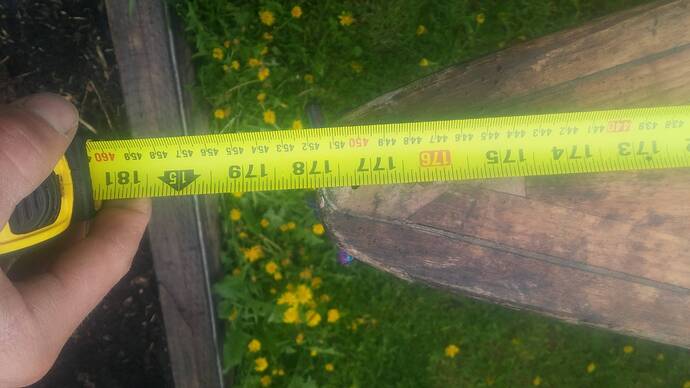 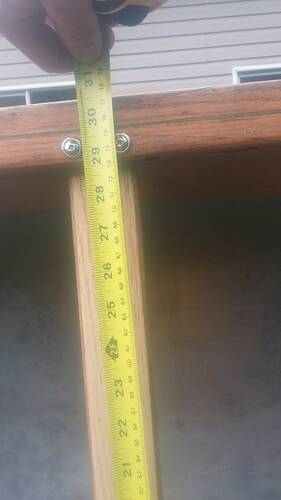 Don’t pull it in too far!

I really hope you put the gunwale width back to specs. It is a great boat and in good shape, You will hardly notice the extra inch or width.

Yes it is a concern. I do need to find out what the original specs are.

It is almost certainly a Courier. That canoe has been rerailed. The inwales and outwales are sandwiched on the hull. Although MRC did sandwich the gunwales on their Royalex canoes (as did most makers), on their composite boats the gunwales were rabbetted so that the top of the hull was not visible between the inwales and outwales. Since it was rerailed the thwarts are probably not stock and the inset deck plates do not look stock either. The canoe may have been pushed out a bit when rerailed.

Also, MRC usually measured beam at the molded hull, not from the outside point of one outwale to that of the other. So in your boat the beam of the canoe in your first set of photos is more like 33 3/4". Assuming the other end of your tape in the last set of photos is against the outside of the outwale, you have now pulled the beam in to about 29" or so, which I agree is a bit much.

I believe that my Curtis Lady Bug and Vagabond both had sandwiching gunwales with the top edge of the hull visible between them.

Just my 2¢ worth but never saw a Curtis with sandwiched rails…owned a few going way back.

To the OP…my bet is Courier.

I have seen quite a few composite Mad River Canoes and have never seen one stock that did not have rabbetted gunwales. This document would suggest that sandwiched wood gunwales were only used on Royalex MRC hulls:

@stevet said:
Just my 2¢ worth but never saw a Curtis with sandwiched rails…owned a few going way back.

You are correct about my Lady Bug - no exposed hull edge. Now you’ve got me wondering which of my past boats that was, since I didn’t have that many with wood gunwales.