We are under a flood watch. Less than 5 minutes ago it was pouring. Now the sun is out. I’m watching water sheet across the back yard. No lack of water in the rivers and lakes this spring.

Tis the season for wild weather! I’m hoping for enough rain to melt the snow that still has me off of some of the mountain roads.

Feel free to send some to us in western Colorado. We’ve had less than 1.5" of precipitation total this year! My folks in north Georgia have had more than 30"!

We lived in Colorado Springs for a couple of years. The most precipitation we saw was a blizzard one January. After living in the Southeast all our lives, the very low humidity took some getting used to.

We are too dry. Need rain.

I live in Nevada. Rain is a blessing and a reason to rejoice.
Too much rain can be dangerous. Be careful out there.

Ditto. We’ve had plenty of rain the past two days, up to four inches in some spots which has added to the high water problems here. Worse, there’s been an Easterly battering our area for three days, gusting up to 30-40 mph. Air temps have been in the 40s. Serious erosion at the shorelines and lots of flooding in places.

The continuing high water level resulted in the DNR closing the only public access to the lake. Our dictator in Lansing divided the state into regions, kinda like the districts in the Hunger Games. Businesses and restaurants in my region and the upper peninsula are allowed to reopen (at limited capacity) at 12:01 a.m. this Friday, but not the parks. Rest of the state remains locked down.

Learned the DNR access site staff is being cut back to four days a week and is not allowed to get back to work until after the Memorial Day holiday as they’re “nonessential.” Thus the access remains locked.

The weekend people aren’t happy since they can’t launch their power boats for the holiday weekend. I personally think it’s great as their boat wakes only add to an ongoing erosion problem.

Kayaks are so much easier to launch and are quiet!

RAIN (and SNOW, for that matter) are money in the Paddller’s Bank!

…Especially from a whitewater-enthusiast perspective.

Sure and you got rain…we had .2 inch. Not enough.

Be careful of what you ask for. Just learned that a dam in mid-Michigan has collapsed and that a second dam downstream is expected to fail this evening. All the water is heading for Midland, Michigan and surrounds. Residents ordered to evacuate.

Edited to add the second dam has failed.

Aren’t many dams here Rookie. But it is the start of the hurricane season.

Sorry to hear that.

I’m someone who lost a house to Hurricane Irene in 2011.
I don’t hold any grudge against rain because of it.

And I have always despised dams, from the very smallest to Hoover. At least 10,000 have been told to evacuate as waters surge to unprecedented levels.

Yeow, that aerial footage is worth a million words.

I was going to chime in that here in SW CO we do need rain, but I have already seen firsthand what gullywashers can do in a few seconds, right in front of my eyes in front of our former home.

It’s hard not to think that the world is suffering the wrath of a greater being who is highly displeased…floods, droughts, pandemic, crop failures due to late hard freezes, early hurricanes, “murder hornets,” wildfires.

When the rain comes… I overhaul the noisy hubs on my bike wheels. Later I clean and lube the chains. Now… SAND AND OIL MY PADDLES. Hope to be ready for… when the sun shines. 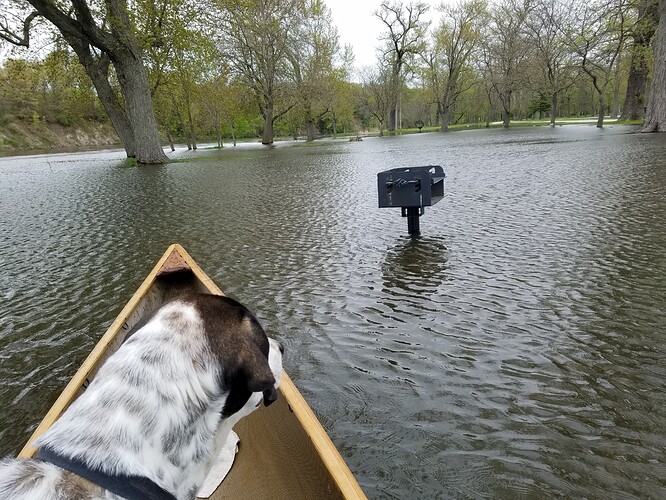 image4032×3024 5.95 MB
Lots of branches and tree trunks floating downstream including this one that passed our parked canoe in a quiet flooded area far from the main river channel. 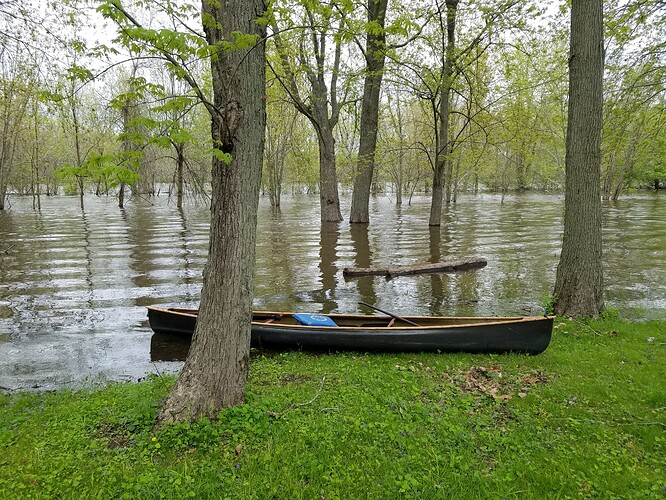 image4032×3024 7.44 MB
It’s a big park and with the entrance barricaded we could make a pit stop at the far end and enjoy having the whole park to ourselves. 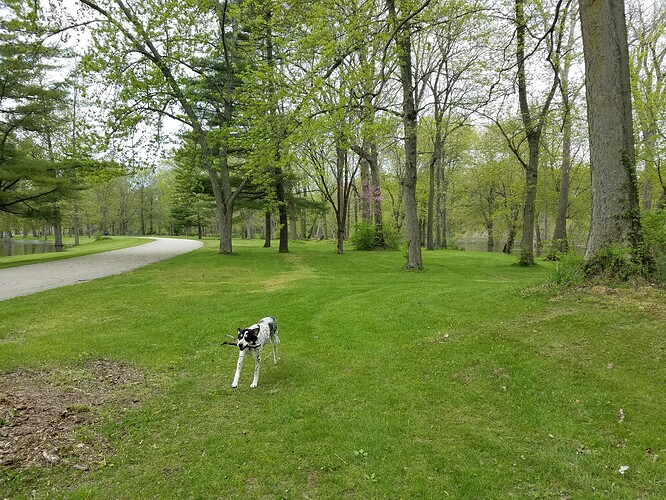 Gorgeous day here and the Huron River is flooded and fast. Made record time near Dexter MI, over 9 mph at some spots. The river is still rising but nowhere near record height. Yet. 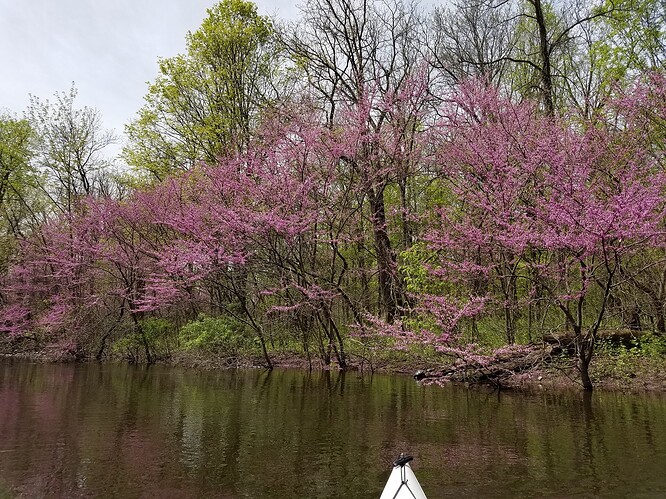 Nice. I used to paddle the Huron in your area often when we lived in Ann Arbor. I still pop back from the west side of the state occasionally to paddle the Huron and some of your local lakes in Pinckney and Waterloo rec area. 9 mph is scooting right along.

Seeing the water through the campgrounds like that reminds me of spring on Washington’s Olympic Peninsula!