We paddled Lake Keowee yesterday. The end we were on is closest to urban areas.
Not sure what they are called but wake boat would be appropriate.
Large power boats driven slowly with wide, low sterns that create a large standing wave. On the wave are people surfing.
Castoff told me the boats have water tanks on the stern to create the wave. He also said they are being banned in places because of the shoreline damage they create.
Lake Keowee is mountain stream fed with clear water. We live in a fast growing , wealthy area and the homes surrounding it are huge with more and bigger on the way. Most could be motels and a few hotel size.
Not my kind of place but it makes me glad that some of our lakes have building restrictions.
We found one small creek where we couldn’t hear the power boats. 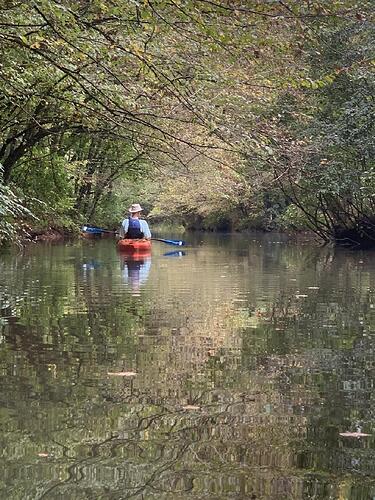 Wakeboard boats are a scourge
We have two of them owned by a camp on our lake
Shoreline erosion and dock damage: we are tired of them and are trying to get ghem banned
Each boat powered by twin 300 hp motore and ballasted to create 4 foot tall wakes

There are seven wake boats where I live, owned by downstaters who have built what I call Ostentation Plantations for their weekend “cottages.”

I despise those boats as the water level of inland lakes is at a record high and the boats create even more shoreline erosion and damage to trees which are already struggling to survive in the high water table.

not to mention that they usually have the sound system turned up to 11.

not here The boats are run by a kids camp and violate the no wake within 200 feet of shore State Law.
When we approached the camp they said they stayed close to shore for the kids safety
and said they did not know of the law
We called the wardens who ticketed the camp
The camp doesn’t care . They can afford the fine
They charge campers 15k for seven weeks

A boat came slowly by yesterday with rap blasting that could be heard a half mile away. I could care less what you listen to but keep it out of my ears.

Yes. I daydream about buying a cannon for my deck so I can shoot out the speakers.

Wakeboard boats have become more popular of late here and there is a surge in lakeside homeowners who are armoring their shorelines with breakwaters. The companies that install them are happy, the wake boarders are happy, but no unhappy homeowners seem to be raising the issue with the township or the county.

Another use for the water bags that add all the weight: when the river is high pontoons can’t make it under a railroad bridge between here and the nearest lake. Our clever neighbor bought a bag and a pump. Lowers his boat by adding 800 lbs on the way to the bridge, then empties it after passing underneath. We may get one next year so we can swim in the lake during our formerly rare flood events.

Our lake has shoreland zoning. No permanent structures are allowed within 100 feet of the shoreline; you may not clear trees at the shoreline up to 600 feet away . Docks must be removable.

Its a loon nesting lake. Wakes flood the nests as loons cannot walk on land. Either loon rafts will have to be built or the wakeboard boats gotta go… I prefer the latter.

Sounds horrible. Just a slight digression…I remember my very first night camping out on the TX Colorado. It’s dark, I’m just about asleep and up the river comes … an airboat. Never knew such things existed. I was convinced I was about to die. How can it be that such things exist?

They are a scourge. Quiet waters are a rare thing… sad.

And then the shooting starts!
Had that happen on river trips in AK.
Scary…

sound system turned up to 11.

We have a 1985 ski boat with ford 351 engine…makes lots of rumble. I suppose there are those that dislike us. It goes to dinner more than ski-ing. Old boat …old people. But the wake boarders can be just as bad as the skiers were… 40 years ago. Some of it is a generation thing. Some of it is one group not knowing the problems of the other and staying away. Like the fisherman that likes the fish in the channel and can’t understand why boats keep going by him/her. Or the skier that keeps going behind the islands cause it is sheltered and can’t understand why the dock people want no wake. Or the kayaker that paddles down the center of the channel and complains because there are power boats going by.

I was shore fishing Lake Lanier in Ga. There was a school of fish being busted by bigger fish moving closer to me. They’'d be in casting distance soon. Then came the wake board boat with speakers blaring. Fish left. Power boarders aren’t always my friends.

There were many power boats that went out of their way for us incl the wave boats.
This thread is really about " I’m doing what I want and screw you!" Unfortunately, the society we have become.

I happen to find wake boat wakes a blast for paddling … but at what cost?

There’s just no telling what you might encounter on the water. I’ve yet to encounter a “wake boat”, if that’s what they’re called, but it sounds like another bad idea who’s time may have come. At least from what I’ve seen there seem to be trends in boats that are an abomination to nature that come and go.
Thirty years ago I used to encounter quite a few “swamp buggy” type boats, some with big opposed four cylinder engines swinging maybe five or six foot blades - loud as hell - the blades tips went supersonic and made a cracking sound that was annoying enough to cause even their operators to wear ear protection. Its been years since I’ve seen one of those on the rivers up here.
And for a while there were jet skis everywhere.
For a while there was a group of folks who would go out on the river with homemade hovercraft, always in groups. They were incredibly noisy and had the unnerving capability of traveling over sand or gravel bars. They could hit you in camp. They looked like something out of a Mad Max movie on the river, but they didn’t have the range to get very far from a gas station and so could be mostly avoided. Haven’t seen those in years either.
The waters belong to everyone, even those who tend to flaunt their disregard for other waterway users. (And paddlers aren’t without sin either…we can tie up landings and navigation channels, paddlers can litter, too.) We’ve all been buzzed by ski boats, I’d guess, and had to turn into the wakes of cabin cruisers. But most of the really bad ideas in watercraft come and go, like fashions. We paddlers are the ones who have always been there and always will be. And we can go where they can’t, so we have some choice in who we share the water with.
I have to say though - those sucker gigging rigs down in the Ozarks are a whole 'nother level in nature disruptive boating. If you haven’t encountered them, they’re big jon boats rigged with enough lights to illuminate a ball park, often with sound systems, that go up and down the river at night, with folks spearing suckers from the bow. If you’re camped along the river at night you can wake up in your tent thinking the starship Enterprise is coming in for a landing just outside. Even barges when camped on Mississippi R. islands are less startling.

I happen to find wake boat wakes a blast for paddling …

Yep, when I have the Delphin out I’ll see how long a ride I can get. Monday night, out with the new to me Explorer LV a power boat was kind enough to send me a nice set of smooth, steep, 18" by maybe 10’ spacing wake waves so I could check the feel while paddling parallel to the wake. Turned out to be very comfortable.

Other than the sound systems on the wake board boats, most all of the watercraft on Lake Lansing seem to be reasonably polite & respectful of others. That said, I’m not often out there on summer weekends. I do know that both the DNR & the county will patrol the lake during busy times.

I can imagine how large waves and loud music on a small lake might be irritating. Maybe that’s part of why I think the Columbia River is my favorite place to paddle. There’s room enough for shiips, ocean going tugboats, huge yachts, and every kind of fishing boat and hot rod boats and they all seem to get along. The only ones that make waves that you have to keep an eye on are the Navy Destroyer types and maybe an occasional Chinese freighter that makes very tall skinny waves. As for the loud music, there isn’t a sound system anywhere that can drown out some of these dual engined , straight piped speed boats.

The river is huge and there’s room enough for all of it and no one is worried about shore line erosion. There was an exception to that a few months ago when a freighter went a little above the speed limit for ships on the river and tore the heck out of a large marina. I’m still wondering how that was done, because that marina is protected by a huge breakwater.

Lobster boats on their day off ( Sunday) are another issue. Some have sound systems that could power outdoor concerts. Couple that with the wake from a boat with 900 hp going 40 mph and we might have a wee problem . Their hull shape generates huge wakes.

Kayaking on Sundays in the fog is risky.

We made the mistake of camping on Goat Island on Caddo Lake over Memorial Day few years back. We normally see the odd fishing boat or a pontoon boat. The water is not very deep and it is loaded with vegetation and alligators, so skiing and wake boarding is dangerous. Apparently though there was some sort of boat party scheduled for that Saturday night and talk about loud! The music went on until about 2am, then all the drunken boaters got lost in the trails trying to find the boat launch. We were awakened all night by boat getting stuck in the mud or running up on cypress knees or by them roaring through the trail with what looked like stadium lights on.
A lot of lakes have taken to restricting horsepower to deal with this kind of stuff, but not enough.