What, if anything, do you use on your deck to keep your spare paddle from scratching it? I have paddle britches which attach to the bow perimeter lines, but that’s kit that has to be installed at the beginning of each trip (and removed). Plus, I use both a Euro and a GP and the stick doesn’t fit into the paddle britches. Trying to figure out if there’s a simple alternative.

Clear “helicopter tape” works great (the name apparently came from using similar tape to protect the edges of helicopter blades). Racers often use it to prevent scratches where the paddle often touches the hull at the catch. I use it for that, and to prevent scratches from spare paddles, etc. I place strategic strips of the tape wherever scratches and wear is expected on the deck. You can remove or replace it easily. The product I use is https://www.amazon.com/gp/product/B000TR6EW2/ref=oh_aui_search_detailpage?ie=UTF8&psc=1 (I prefer the 4" width tape).

Rather than apply dry, it’s usually easier to apply by first cleaning the surface of your kayak and applying the tape after wetting the back with a solution of water with a few drops of dish soap – this lets you move the piece around to exactly where you want it and then squeegee out any air bubbles (an old credit card or similar works very well).

Thanks, Greg. Sounds great, especially the easy removal part. Will give it a try.

In the past I’ve used a clear nonskid tape. You can get it in different widths and I put some near the cockpit tp help exiting.

Why do you remove the paddle britches each time.?

Same question as Overstreet, why are you removing and replacing Paddle Britches each trip? Mine have always lived on the boat year round. Only come off the boat when I rerig the perimeter line. They are faded but they still work fine.

That said, if you want to fuss with it you can get clear protectant from any auto supplies place. It is a PITA to put on but it’ll prevent scratches for at least a season per application.Not bad for the side of the car if the Hullivator drops a bit near the car under weight either. You can use something like Goof Off to clean it when you want to replace.

As to the GP, only way I have found to handle that is to rerun the deck rigging and add a loop at the bow that the GP can go through. Especially when talking a shorter person’s boat. Then use the nearby bungies for the other end. The caveat is getting the darned loop stiff enough that you can actually reinsert the GP while on the water. I have tried plastic tubing to do that, with partial success. Frankly have not found an ideal solution.

I have paddle bags for my spares, but the truth is that most of the time I don’t even think about carrying a spare. I also have a four piece paddle that fits in the rear compartment. Actually, on my NC I can put a two piece in the rear compartment. My plan for what would I do if I broke my paddle, or lost it is to use my hands to limp over to an island and find a board, or stick to get me back to the launch.

My GP slides under the bungees. Last fall I ordered flexible deck balls from Current Designs; they work well when the britches are not installed. Britches cover the furthest bungee so that deck ball has to come off (easily done). GP sort of rests on top of the britches. At least one end is close enough to reposition the paddle when needed. Still thinking about that one.

Even with the britches, the deck still gets marked up. I think the tape Greg suggested is the best alternative. Should be easy to install; the scuff marks have left a trail. Took measurements last night and the four-inch width will do nicely.

Rookie, not quite understanding what is happening at the end of the GP near the bow. Is it secured under something? Or do you need something to run that far end thru or under? One older solution people have tried for stabilizing paddles is a short piece of plastic plumbing rigged securely. Requires you drill a few holes in the tubing to run rigging thru. Problem with a GP is it would have to be huge or oval, first .is unpleasant to live with and I don’t know if the second exists.

As to the britches, mine may not be velcro. But you are doing more work at the end of the paddle than I would bother with if they were. Probably wouldn’t come off unless I was switching boats (right now everything I use has them) or doing some kind of winter pack up. Unless you don’t trust the velcro to hold on the highway? Is it still four loops that run around the perimeter rigging on both sides?

@Celia. Three velco attachment points on the britches. They’re designed to move from boat to boat, not to be permanently attached. And no, I would not trust them to stay on the kayak while on the highway. It doesn’t take but a couple minutes to install/remove, but not using it would be one less item on the list.

Nothing secures the GP to the bow when the britches are installed. I’ve tried some alternatives, but nothing that worked. Not an issue now as I don’t use the GP in ice water. Too wet of a paddle, even when I keep my hands out of the water. Although I did use it today for a while at home - about 75% of the ice is off the lake here. Dumped in that water too, while practicing some balance exercises from Nigel Foster’s book. Wasn’t in water over my head and my drysuit kept me comfy - but there sure is a difference between walking into cold water to do a drysuit check versus suddenly dumping into it.

Not drilling any holes in my boat. Ditching the britches will let me slip it under the bungee closest to the bow, which will keep it stable.

Rookie, you did not understand what I said. I would NEVER recommend drilling holes in a boat to solve an issue storing a spare paddle.

No holes get drilled in the boat to use the plumbing segments. You put holes in the plumbing pieces and run bungie line thru them. The issue that I mention above is the bigger one, finding the right sized and shaped piece of plumbing for a GP. It can be very secure, some folks were using it in surf where securing splits can be challenging.

In my case, I was unable to secure a GP towards the front of the boat via bungies without having other issues towards the bow. You can use plastic tubing to stiffen perimeter line if you can figure out how to place a reachable loop or small bump up between two RFD’s. It at one point was a popular way to create an easily grabbable spot for a bigger guy with gloves on between two RFD’s that could be close together. That was some years ago, it fell out of favor and of course it requires rerunning the line . But it can be a useful tactic for some situations.

My older britches may have one more attachment point. Would have to go down and look.

I just use a piece of tube over the forward bungee. Works fine I use the clear tubing 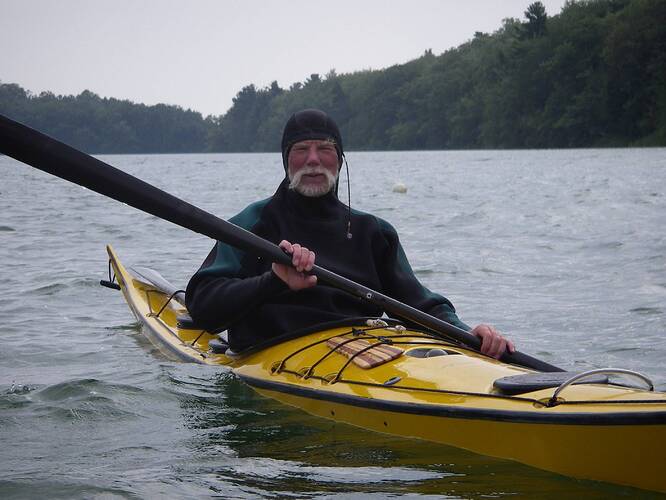 Hi Roy. I tried that but ran into a smaller person’s boat problem except on the 17 ft plus boat. I couldn’t get enough length with that spot for a secure grip.

But thanks for the pic illustrating this! I don’t currently have a boat set up to show off the use of tubing. 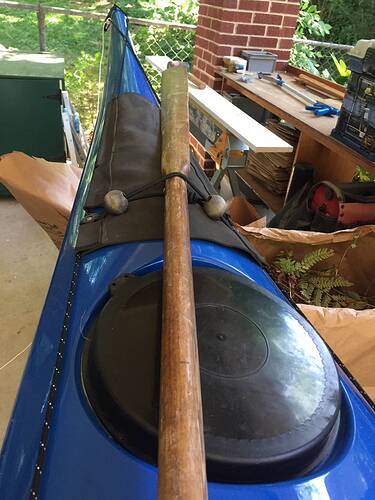 This has worked pretty well for me. I cut some thin mini cell (1/8" I believe) in the shape of the part of the foredeck where the GP was causing scratches, wide enough that I could fold the excess over the perimeter line and secure in place with contact cement. I drilled a hole in each of the wooden balls that I purchased from a craft store to hold the bungee high enough that I can wiggle the paddle underneath from a seated position in my boat. I was worried that the foam (which is a little looser than I had hoped) might not hold up well at highway speed but so far so good (probably with 5K highway miles).

A “paddle loop” at the end of the kayak works great for a GP, as others have posted, and is the method used in Greenland.

If you don’t have a deck fitting in the right place you can add a loop anywhere along a deck line: run a short length of shock cord through tubing and crimp the end of the shock cord tightly around the deck line (on each side) using a stainless hogring. A benefit is that you can slide the installation along the deck lines after installation to adjust.

Stores such as West Marine carry hogrings. They come in different sizes – get the size to match the diameter of your shockcord. You can also get special pliers that makes working with hogrings easier, but regular pliers also work.

In the photos you can also see the clear helicopter tape, to prevent deck scratches when inserting and removing the paddle. 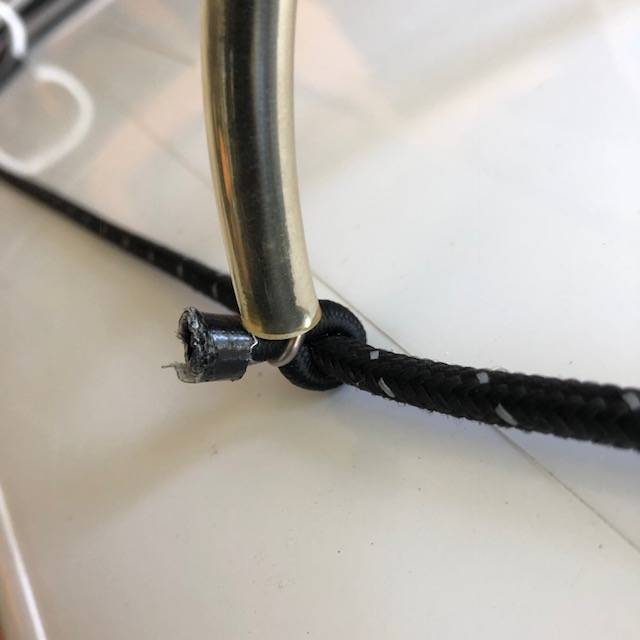 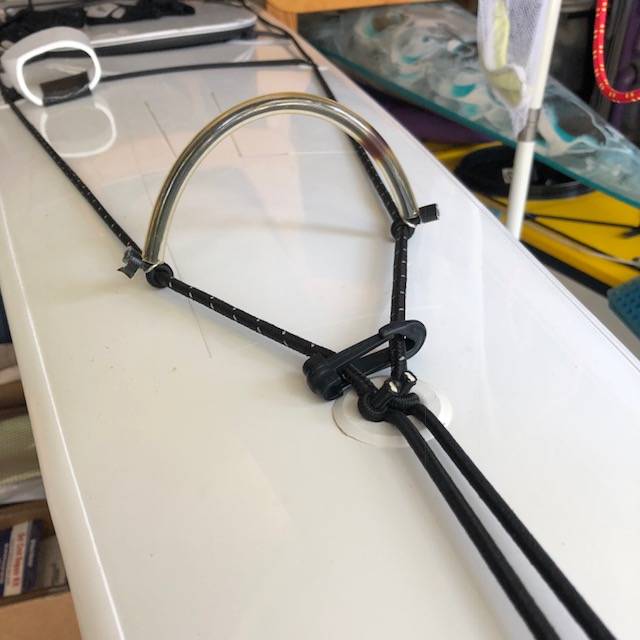 . The caveat is getting the darned loop stiff enough that you can actually reinsert the GP while on the water. I have tried plastic tubing to do that, with partial success. Frankly have not found an ideal solution.

I use these, or the ones with the softer and thicker foam covering, to form stiff loops for the paddle shaft to go through on the bow of the boat. I attach them to the perimeter lines or other rigging

Thanks, Greg. I’m always grateful for your help and suggestions. They work. The photo below shows my GP when the britches are installed (and block the most forward bungee). If I can slide the GP tip smoothly under that bungee, I think it will ride more securely. Just received notice from Amazon that the tape was delivered so that’s on the menu tonight.

I do have hogrings left over from making my contact tow - as well as line. Am guessing a nonstretchy line would work since it’s encased in nonstretchy tubing - or am I guessing wrong? 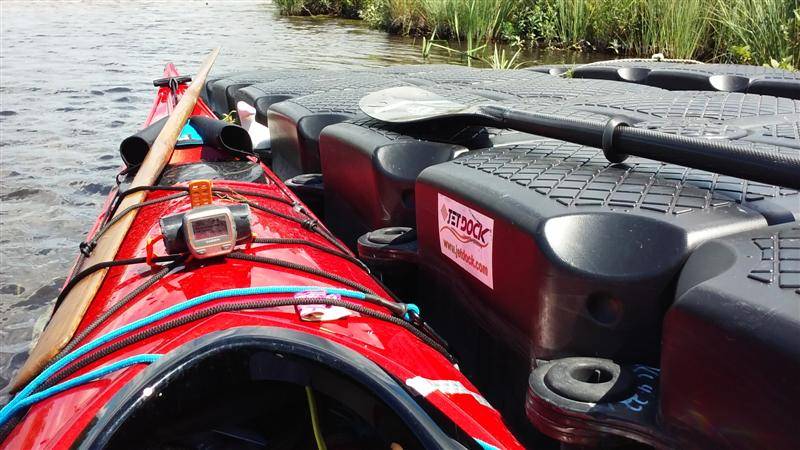 Rookie, thanks. I have only used 1/4" shock cord with the hogrings. I don’t know how well they work on line. You need a tight crimp on the decklines . If a deck fitting is at the right place, I’d probably use that instead of attaching the loop to the perimeter line.

Regarding the tubing, I think I’m just using some scrap 1/4" ID vinyl tubing. You need just enough length to form a stiff loop. I can smack mine with the paddle and it stays upright without flopping around or falling over.

Got the tape, read the instructions, and had to wait until the air temp got to 50F before applying. Today was the day. Third and fourth strips were easier than first two, but it’s pretty easy to work with using the wet technique Greg described. GP carried securely without a loop. Thanks! 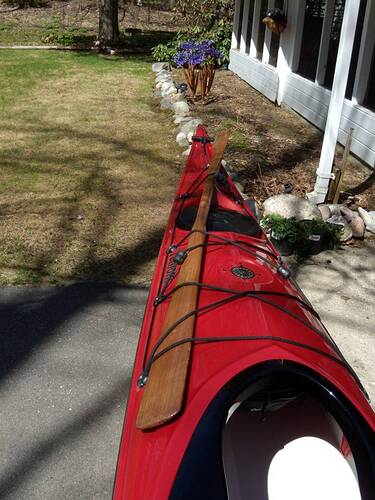 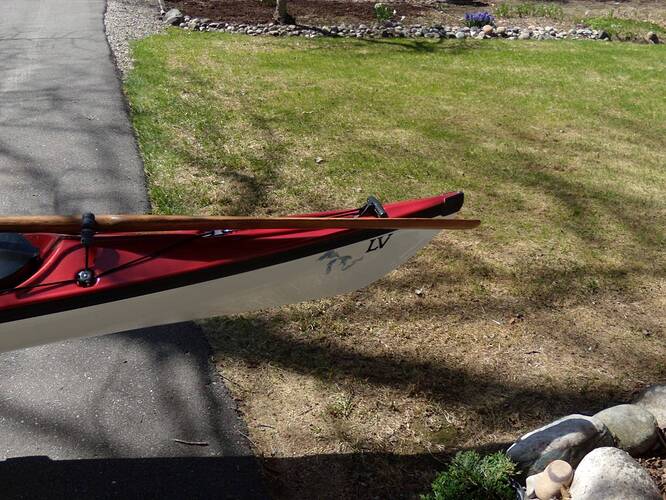 Roy, off subject but i really like the look of your boat. What model is that? Too soon for me to get another boat but might want to try to demo one if the opportunity arises.

@roym said:
I just use a piece of tube over the forward bungee. Works fine I use the clear tubing