Before you panic (due caution is good), last week a shark took out a seal in the middle of a pod of 20 plus surfers at Nauset Beach (just north of Chatham). YOWSA!!!

Who does not surf with seals… ever!

I would have wet my pants.

They would be wet pants anyway.

Jack, you’re too old and tough for bait .

Perhaps their are some sharks that are “picky eaters”?

Unless sharks somehow make their way into the rivers where I paddle; what they eat is never going to be an issue for me. I made a couple of forays into the ocean near Monterey, California in the 70s. I was trying to learn how to surf. My last day out was the first day a shark cruised into our location. Haven’t been back in any ocean since then, and won’t be in the future.

@JackL said:
We just arrived in Plymouth yesterday and heard that Plymouth beach was closed for an hour because of a confirmed Great White sighting just off shore

My friend and mayor of Plymouth Indiana, Mark Senter, weould never let that happen in his town.

It’s a convention of “gray suits…”

The beauty of wetsuits is that you can “wet it” with no embarrassment.

JackL said:
“… Plymouth beach was closed for an hour because of a confirmed Great White sighting just off shore.”

Overstreet said:
"My friend and mayor of Plymouth Indiana, Mark Senter, weould never let that happen in his town.

On dry beaches of Indiana,
the Senter might just be the mayor.
But out past mass breakers the landlord is lurking.
Hoosier daddy with icier stare.

So come what pilgrims may flower,
hoosier to say pop corn here.
When the landord gives you seal of approval,
crossing state lines will teethe on this fear.

I was there not too long ago–inside Wellfleet Harbor but playing around the spit of sand on the ocean side where the tide rushes in to give a little whitewater.

I found a porpoise that got hit by shark.

There is a “hidden” (meaning totally awash at high tide) island…Billingsgate. I have seen more and more seals there.

Silky shark in the Bahamas, taken before I knew better…
https://drive.google.com/file/d/1X-cTdsCGiPsx15kAaikmyMLkZZItTSh9/view?usp=sharing

Did you see ‘Naked and Afraid of Sharks’ ?

The dive location was scarier than the sharks, 4000ft of gin clear water. You could see forever but there wasn’t anything there… except the sharks of course.

Can’t wait for colder weather so the gray suit visitors can head back down south… LOL!

Next week I am planning to surf… But not down the Cape, for sure.

Next week I am planning to surf… But not down the Cape, for sure.

Yikes! Hopefully the sharks don’t keep coming further north…bad enough that they seem to be getting more common off MA. Especially with the number of people who go to those beaches.

People get bit every year, and 10s of millions of people are in the water each summer (2012 it was almost 60 million). very few fatalities. Yes every attack is terrifying and can have a significant impact on a persons life. Cars injure, maim, and kill orders of magnitude more people. I suspect the numbers killed going to the beach in the family car far exceed the numbers killed by sharks. Yet it seems we tend to have an inordinate fear of sharks when at the beach, but happily get in the car to go there.

Just like putting on seat belts, defensive driving, and buying cars that do well in crash tests to reduce the risk entailed in driving there are things you can do to reduce the risk of shark bite. One is don’t swim with the seals present, or were sea birds are actively feeding because you would be swimming where the sharks like to feed.

At the SC coast this summer I saw three, four foot and larger sharks in three days of kayaking. While at the beach we saw many small Blacktip and somewhat larger Bonnethead Sharks caught by surf fishermen. We also saw a dead 12 foot Tiger Shark washed up on the beach. There were 10 shark bites reported for the state in 2017, the average is 5 a year, but better reporting may explain this number.

I am posting some photos. The links are quite informative.

Myrtle Beach Shark Attacks: Should You be Worried or Not?

Many people who vacation at a beach love the ocean but are afraid of sharks. But should they be worried? Check out this interesting graphic with facts about sharks and more to help you ease your mind while you're vacationing in Myrtle Beach! Learn to...

Baby Blacktip shark on the hook. They released them. 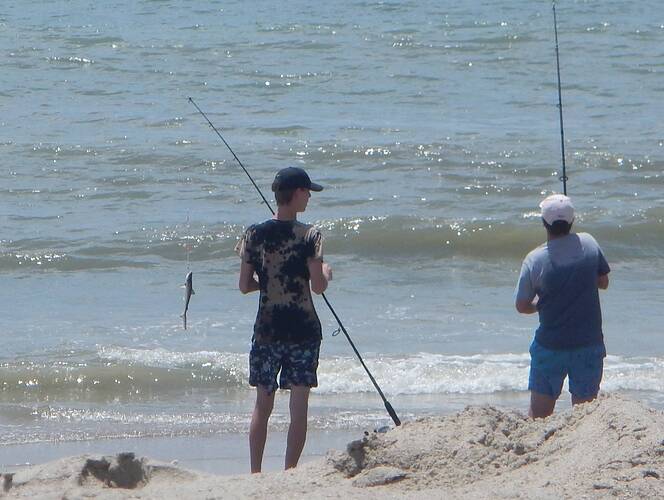 Bonnethead Sharks get bit by people they are eatable. 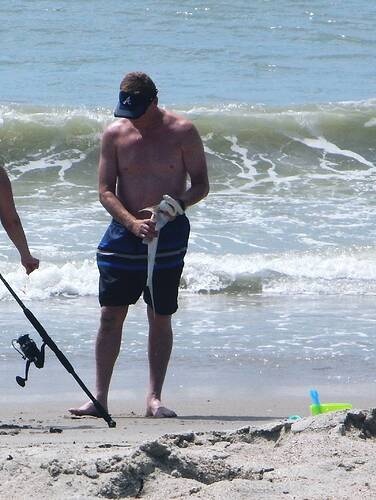 Twelve foot Tiger Shark washed up dead on the beach. 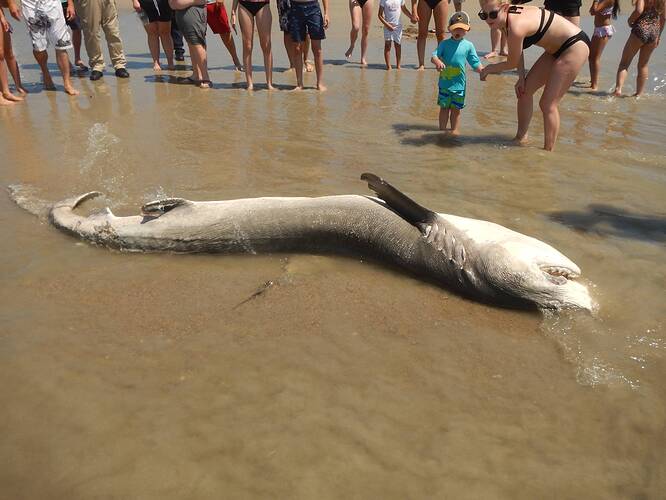 I see a couple of comments talking about where the sharks are…they are all up the coast, including Great Whites off the coast of Maine. But as Sing pointed out they are generally where there is something for them to eat. Being single minded and mean doesn’t make them stupid.

So the food mostly lives in the warmer waters of the Gulf Stream or at least near it. The Gulf Stream wiggles some each season, but it is generally closer to the shoreline at Cape Cod and below, then bends way out to eventually join the larger flow of the Atlantic currents, That is why there are more reports of shark incidents further south than in Maine. The sharks are there, but in general there are not a lot of people sharing the water with the shark’s dinner.

If it really gives someone hives, learn to roll. At least then the only way a shark will bother you is if you are too near something else they are chasing or if your kayak has an especially seal like look. For example skin on frame kayaks that some people paint up with a stealth paint coat.With a roll you won’t be in the water long enough to get their attention.

The swells on cam can be seen rolling in with nice peeling breaks. Perfect for surfing. It was unfortunate today for a cape surfer…