Show me some pretty color schemes

Perfect description - a slice of jade. What does that weigh? Can you pick it up with one finger?

@Pru and @Medawgone - when I worked for the Valley importer we would get to choose all the colors for the non-custom boats (although in reality, every composite kayak is “custom” in the sense that someone chose the colors!). We did a whole run of kayaks with gray hulls, white trim and various colors for the decks. It is a really sharp color scheme that looks great. This Valley is older (based on the logo sticker) but clearly someone else had the same idea several years before!

We also did a bunch of white hull/“normal” deck (red, orange, yellow) with unusual trim colors. Yellow deck with orange trim, red with blue, orange with gray, etc. You don’t want to go too crazy otherwise the boats won’t sell but it was fun to be a little different than the usual colored deck/white hull/black seam.

I had WAY too much fun poring over the Valley color chart - all 84 choices!

You won’t miss the glitter because your new boat is always going to be bedazzled with drops of water. Nature’s glitter. I also really like the color scheme you chose.

So what did you choose in the end?! So curious!! (& living vicariously

the SOF weighs 32 pounds. Yup. I can lift it with one finger. It is nearly 18’ long by 19" beam. All lashed and laced cord construction with no metal except a few screws on those deck cleats and two screws on the backband. Light, comfortable for hours and fast. I can outrun most of my friends in hardshell touring boats with half the cadence and effort even using a GP. Tracks like it’s on rails but I can turn it with a couple of sweeps by leaning it onto those hard chines – which makes that semi recessed skeg bump in the keel lift out of the drink and shorten the water line.

It’s what I shared earlier but with no metal flake. Since I love it muchly, here it is again - sans glitter!

Color palette on my new Petrel Play.
Built by Joey Schott of https://www.turningpointboatworks.com/
Designed by Nick Schade of https://www.guillemot-kayaks.com/ 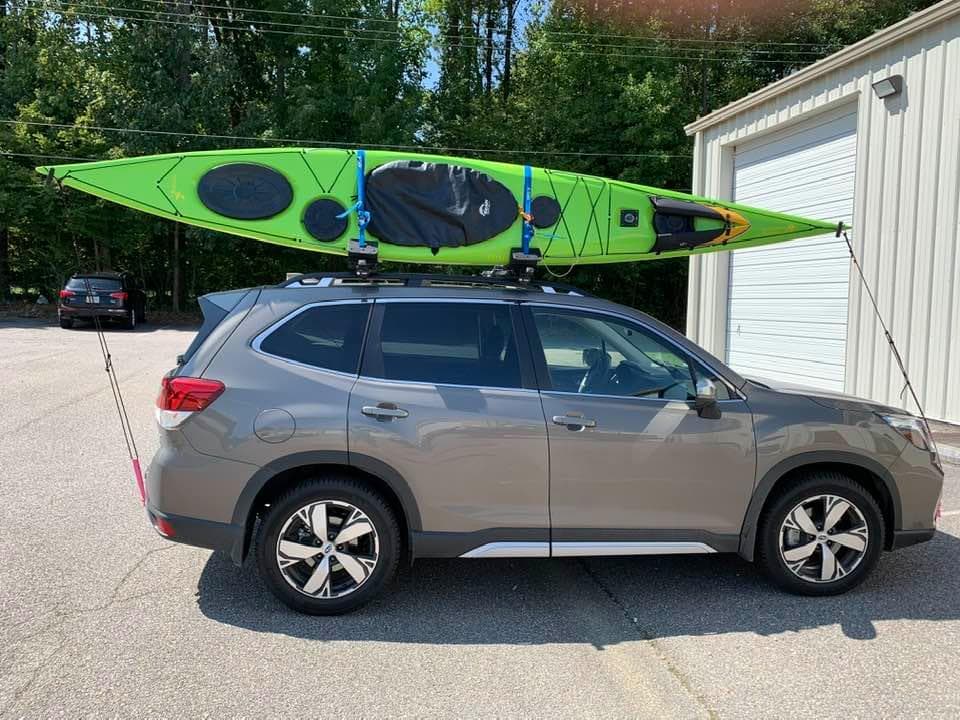 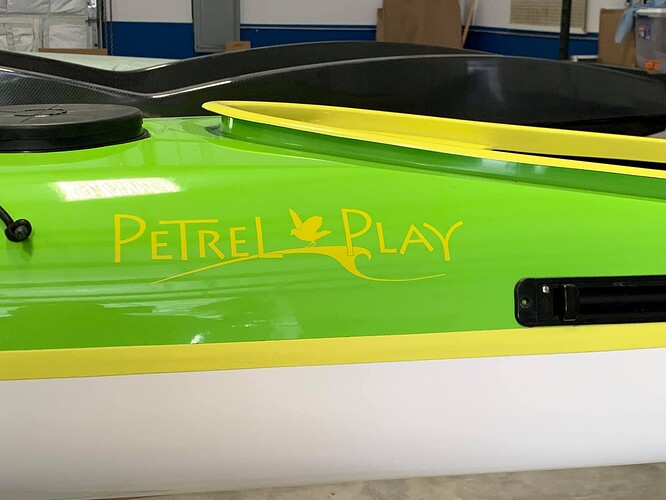 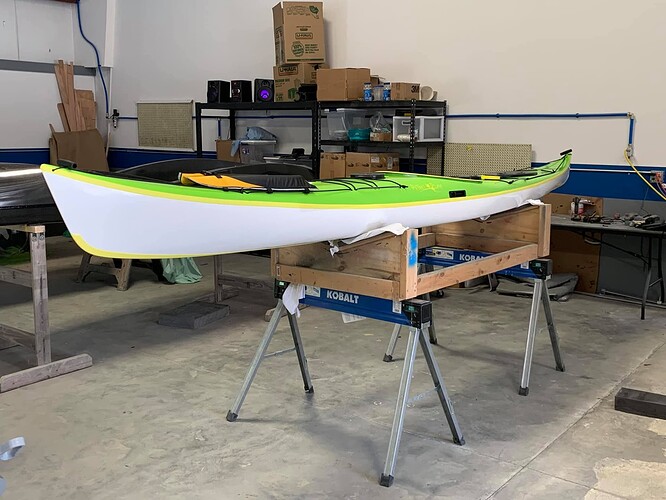 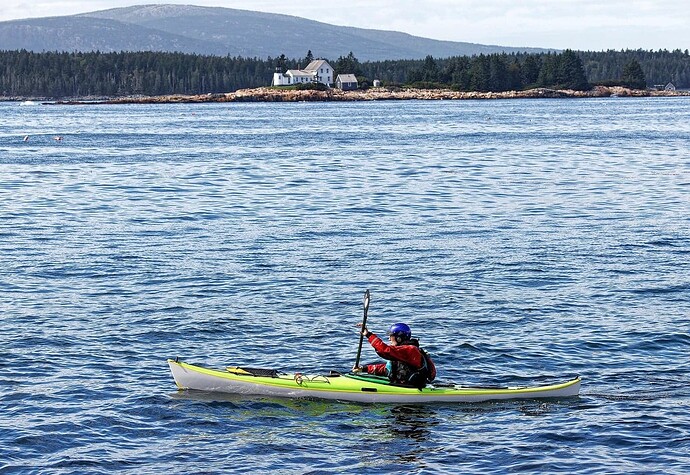 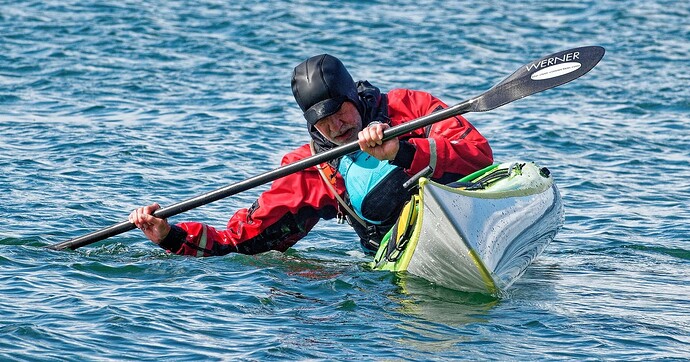 Probably hard to repair for most.

Look at the shine on that beautiful boat! I’m going to need to take a photographer with me on my first paddle, too.

That occurred to me as well. I’m over the lack of glitter now. Mostly.

When I re-skin the SOF I plan to paint a red, white, black and green Haida design of the Sisiutl two-headed sea monster across the whole hull before laying on the epoxy coat.

See if they will just sprinkle a little fine metal flake on the bow deck where you can see it sparkle. No need on the whole boat (unless you want to impress gawkers). I do enjoy what I can see of it on my Avatar. I have to patch and gelcoat the gash in the stern and that will not have glitter.

I considered that, or asking for about half the amount of metal flake, but I suspect @Brodie is right that the extra weight is more than just the metal, that perhaps extra coats are required in the process. I’ll just appreciate nature’s glitter, like @Doggy_Paddler pointed out. I think having this as light as possible is going to be the key for my long term enjoyment.

On many of the Carbon Greenland Paddles I made , I put some mother of pearl . Can’t see it in the pictures…but in the sun, it offers a fun difference. A depth, and the mother of pearl picks up a spectrum of colorful sparkle. 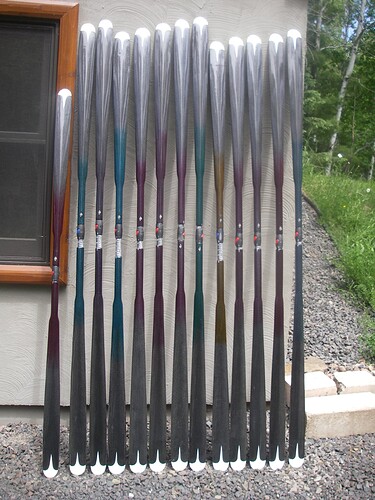 Was trying to remember the name of the guy who was making gorgeous CF Gp’s with custom elaborate colors designs embedded in them, patterns like iridescent rainbow trout skin and shaded deep jewel tones. Objects of visual lust (and reportedly light quality tools as well).

I am thinking it was about 7 or 8 years ago, maybe more and the brand began with N or H and was sort of a Greenlandic riff. I was planning to order one for myself but dragged my feet – even contributed some significant cash to a Kickstarter fund he set up to finance getting a higher volume vacuum wrap machine and some CRC stuff to up his production – was supposed to go towards buying a paddle once he got the new venture off the ground. But I think I was only one of maybe 3 people who did so and it turned out to be one of those “no refund if we don’t make the target” deals so I was out a good half of the cost of a carbon Gp with nothing to show for it. Caveat emptor.

But I am happy with my red and black Gearlab Akiak GP now.

If only my bank account wasn’t thoroughly depleted, because I’d try to talk you into selling me one of those beauties.

You are probably thinking of Ron Steinwell’s Paddles. His company was named Norvorca .

He told me the name meant to build a new pot. He was going to start a pottery business, but instead he got into making paddles and just used the same name. He was an artist and very exacting.

I really never made paddles to sell. I was experimenting with shapes and what each change made. I made several series of paddles. So I don’t just have a paddle like most do.

I have series and most are in different configurations. I had initially planned to bring some different lengths and widths to Michigan Training Camp {where I attended for many years} and see if there was any combinations that actually worked for a majority of people and could better fit a group of all different sized paddlers. {meaning if a person had a hand that fit a 8 cm width, would there be a length that would fit 9 out of 10 times etc} I needed paddlers that already had a good Greenland stroke dialed to figure this out.

My theory was to have people try different shapes and see if there is a preference for one over another. {there are 3 basic styles of Greenland Paddles since the last few hundred years that evolved as to how hunting was done} Instead of just copying someone else and deciding that is “The one”

There is also a lack of paddles that can be easily taken on a plane, so one of my design parameters was that a paddle should be able to fit in a medium suitcase . {all my paddles are made such that they can be made as a 4 piece paddle} {this was a personal passion, and not necessary for most }

Sorry…trying not to steal the thread…But , this has been a passion for many years.