Skirting around: Stuff I didn't know

When I purchased my Assateague a number of years back, it came with a skirt that just happened to be a good fit for the boat and for my body. It was reasonably easy to put on, came off well enough, and kept most of the water out. I briefly tried this skirt on my new Dagger Stratos and it didn’t seem to go on well. I’m going to try again and see just how tight it is, but I have my doubts it will work for both boats in the long term.

I already know that I want neoprene (at least I think I know this…) but wasn’t sure what the functional difference was between a bungee and rand. I find myself wading through YouTube videos and I discover after many years of using a rubber randed skirt on my composite boat that apparently it isn’t the best choice for this application.

Can you guys confirm that I should ideally be looking for a rubber randed skirt for the (RM/PE) Stratos? Of course “Seals” is often where one starts to look with skirts, but are there other ones I should be seriously considering (if easily obtainable in Ontario, Canada)? I like to be upside down and halfway in between. I plan to be in larger waves, smaller surf, and some moving water. I like a dry cockpit unless I’m doing reentries.

http://snapdragondesign.com/products-page/ I have 5 from them

One I use most and have longest is about 8 years old. Still like new few fuzzy piles on deck. Still works like new.

They have a large array of options. What do you have?

All neo except one partner uses is all nylon but that’s a seals now that I think of it.

I’ve been very happy with Snapdragon.

a rubber rand usually works best for poly boats. If possible I like to bring my boat with me when shopping for a skirt. You can try it on to see how it fits your boat.

Rand skirts are generally for white water boats. Reason Rand generally fit really tight and are much harder to remove . So there less likely to impload in a white water situation. I would not get a rand for your application. Seals makes good skirts. A friend has a IR Klingon Empire Bungee skirt he likes and I tried it out. Really kept the water out better than my seals Surf skirt. Both of those are neoprene.

Randed skirts hold on to combing better than bungee. Important if you are doing more extreme stuff where waves may be crashing down on your deck. The randed skirt will reduce the chance of the skirt getting imploded in extreme conditions.

This better holding on usually means they are much harder to get off (and sometimes get on).

I have a Stratos, and only use bungee skirts on it. Haven’t yet had a skirt implode. I did buy a Bomber randed skirt with XL deck (correct size for these boats) when they were closing out their line, and it sits in storage, as I never was able to comfortably get it on my Alchemy (this was pre-Stratos, but I don’t expect the result to be any different with my Stratos).

Randed skirts are NOT to be used with composite boats. The rand bites into the composite combing and gets stuck on - not something you want to have happen.

It’s too bad my current randed skirt doesn’t fit on the Stratos. It’s a PeakUK 1.7 . I tried it again last night, and I can get it on but it’s far from a “good” fit. If it did, I’d use it for the Stratos and get another one for the Assateague.

So, rubber randed neoprene it is then. On one hand I’d love to try them on the boat at the store, and on the other hand there aren’t many (any?) stores nearby to choose from. I’d like to purchase online, but I’d also like to have a very good chance of it fitting the first time around. Am I asking for too much with this?

I avoid anything rubber randed except for my whitewater boats because they are usually too tight for me to be sure I could get off, especially with glass boats. That would be less of an issue with a poly boat and I know some guys who prefer a really dry cockpit who use rubber randed skirts more than me. But yeah, they are also easier to miss on fit with than a bungied skirt. Make sure you get one from a provider that is really good about handling issues, like Snapdragon or Seals.

Funny thing as most of the water that gets into my boat comes by at the waste not the contact against the boat. I still say avoid rand unless for white water.

Second what dc9mm says - I don;t think skirts often leak at the combing-rand/bungee connection, but through the tunnel or leaks straight through material or seams.

Ok, good to know. Thanks for the input. I think a bungee style will be easier to fit and more likely to fit a wider variety of boats.

never saw a rand skirt what is it? thanks

Saw seals video on different skirts I see it doesn’t stretch much what takes the place of the bungee? thanks

@PaddleDog52 said:
never saw a rand skirt what is it? thanks

Here’s an explanation from IR.
https://immersionresearch.freshdesk.com/support/solutions/articles/22000178649-difference-between-bungee-and-rand-skirt

Rands are similar to the seal around your kayak hatch lid rims, if you have rubber hatch covers – a continuous stretchy lip of material. Here’s a pic of the underside and rand of my old Seals whitewater skirt (being inspected by His Majesty). They require some brute strength to get on but are really solid on a plastic coaming, hence their preferred application for whitewater. 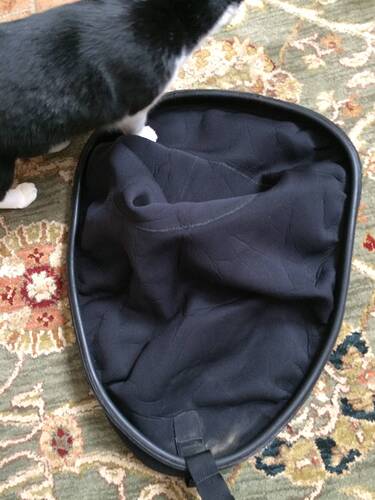