have an idea what to do but hoping someone has a better one. Looking to get 17 ft kayak down a rocky embankment to waters edge. About a 6-7 ft drop. Rocks are big and jagged so have to be careful. Thinking about putting a couple pieces of lumber down and sliding the kayaks down but may be better/simpler/easier ways. 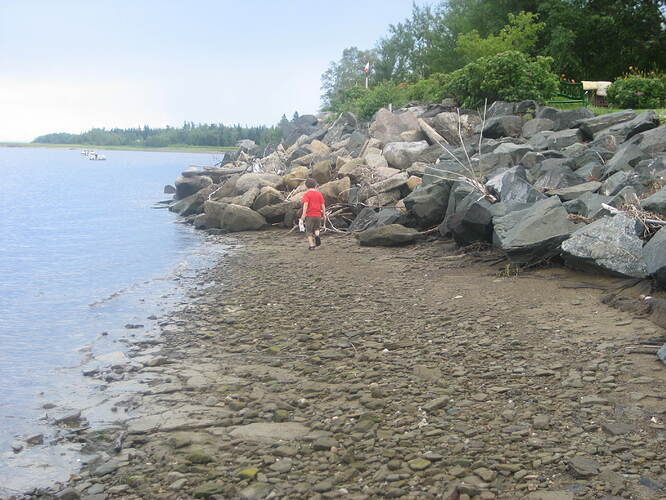 The wooden rails would be my first thought too, but here’s another crazy idea (that might be really expensive). Get some large diameter black plastic corrugated drain pipe. Cut it in half so that you have a “trough” shape and just lay that down on the rocks. It could probably follow dips and curves slightly, and if made of several pieces joined together loosely it could be even more conformal. And ideally you could drag it up off the rocks when not in use and stash it out of sight. But, that drain pipe isn’t cheap.

Dunno how bad the wave action or how heavy the boat, but in a similar situation we were able to fill between boulders to create a safer path. Filled between the boulders with large rocks, between the large rocks with medium, between the medium with crusher run to create flat steps.

Maybe @PhotoMax might have some ideas. He had a similar question last year:

I have a small waterfront home on the “quiet” east side of Orcas Island in the Washington State San Juan’s. Right at Doe Bay. This is a very small but very cool property that I have been working on for almost two years. The shoreline that I own is a very rugged, rocky slope. Our cabin was built in 1995 and was (from all accounts) one of the very last homes built so close to the water on Orcas. You could never build this close again. The tide swings here are huge. I am determined to be able to …

Waves, although usually small, regularly come up half way on the rocks, to the top in bad weather, so anything smaller will regularly get washed out. Some of those big ones get moved around in storms and when ice moves in spring. If I had a better pair of binoculars would be
able to see Portugal off in the distance. would have been a good idea though, thanks.

Drain pipe may be the way to go, but I am thinking regular sewer pipe. Split it and lay it on the rocks and will be light and easy to pull up. Store it under the kayaks. thanks.

Unless I am mistaken, those are lobster boats in the distance. Plus the Portugal reference. So yeah, if this was low tide the high one will come over a good portion of those rocks even without weather.

I suspect getting the boat down on some kind of a track would go better than getting it up again. Assuming something like a cut sewer pipe, you thinking PVC?, can be anchored and gets the boat down - is there a tree or something to which you could affix a basic block and tackle to help you get it up again?

Boats are fairly close, big inflatable and a speed boat of some sort. And I thought of a block and tackle set up too but there isn’t anything to tie to. Considered burying a 5 gallon can of concrete with a chain imbedded in it but would like a higher point. Presently I am carrying it up and down a set of stairs, but at 70 lbs and getting close to 70 myself time to think up an alternate method. However, now that I think about it there is a tree by the stairs, about 20 ft from the bank, that I may be able to use with the help of a piece of strap to extend it. Worth checking, thanks for the reminder. And I am thinking about using PVC

I saw someone who had rigged up a small 12 volt winch to drag his kayak up into the bed of his pickup truck. I wonder if one of those 12V lithium jump starters would be enough to power it? With the wireless remote, you could be at the water and help get the kayak started back up the ramp:

matmac, do you own the tree by the stairs? If not, please leave it alone. If you do own it, and the tree is big and strong and the bark is good and thick, it’s probably fine to use it as long as you don’t leave anything installed that completely encircles the trunk. It is far too easy to forget about things like that until it’s too late and you’ve garroted the tree to death. Also, thin bark will be damaged, and bark damage can be an entry point for disease.

If you own the property at the top of the rocks, you can probably install a post there. An extra-strong wood post, maybe a round one in a nautical theme, or if you need more height than that and might like one anyway, consider a flagpole!

Set it far enough back so you can get the kayak’s center of gravity all the way to the top. Also you might need to guy back a flagpole at the winch mount point - not sure how strong those are.

Have a fabricator make you a mini crane with whatever span you need and install a manual winch. Assuming you can place on the bank. This should be fairly inexpensive (800-1000)

Something similar to this, you can get this with a 16’ span

Ok, so what is your kayak constructed from? Kevlar, plastic molded, etc?

I would look at either a wooden or an aluminum ladder, you don’t really need your support to be very long. Something that you lay down across the rocks, get your kayak on. Now you get down to the sandy beach, pull the ladder a bit and your kayak is right there. Go for light weight and easily adjustable.

Kayaks (3) are plastic, 2 16ft and one 17ft. Ladder, or reasonable imitation, may be the solution. Couple 2x4s with connecting bars will be a good starting point. Will be easy to lower them, but will have to come up with something to keep the lower end from dragging on the beach (rock, unfortunately) when pulling them back up.

Thought of a crane type hoist, but be my luck someone would come along and use it for a swing to launch themselves onto rocks.