So we took the grandson out for a little weekend river camping. We’d set up camp on a sandbar, had supper around the campfire and the lad turned in. We were sitting around the embers of the fire, beautiful partly cloudy night, with low broken clouds, clear starry skies above. Moon shadows bathed the sandbar when the moon could find a break in the clouds. No serious light pollution…
I noticed in the eastern (more or less) sky four or five lights, like airplanes flying with lights on at less than commercial jet altitude - they were moving across the sky at a pretty good rate and, strangely, in single file pretty evenly spaced. Then I noticed overhead through another break in the clouds three more on the same heading also lit up and flying in single file. And in the western sky five or six more, single file, lit up. Didn’t hear a sound from them. And they just kept coming, flying west to east. At one point we could see a dozen all at once. There were at least 50 and the parade lasted at least ten minutes. Of course I have no idea how many might have passed before I noticed. At one point we glimpsed through the brakes in the clouds three more, one red lit, flying a parallel course in the opposite direction to the right and left of the single file line.
What the heck was going on up there? I’ve never seen anything quite like it. Has anyone else here seen something similar? Is there some military training exercise or supply flying that anyone here knows of that would look like that? I checked the news, no mention of an alien invasion…
Any ideas what’s up? Most peculiar… 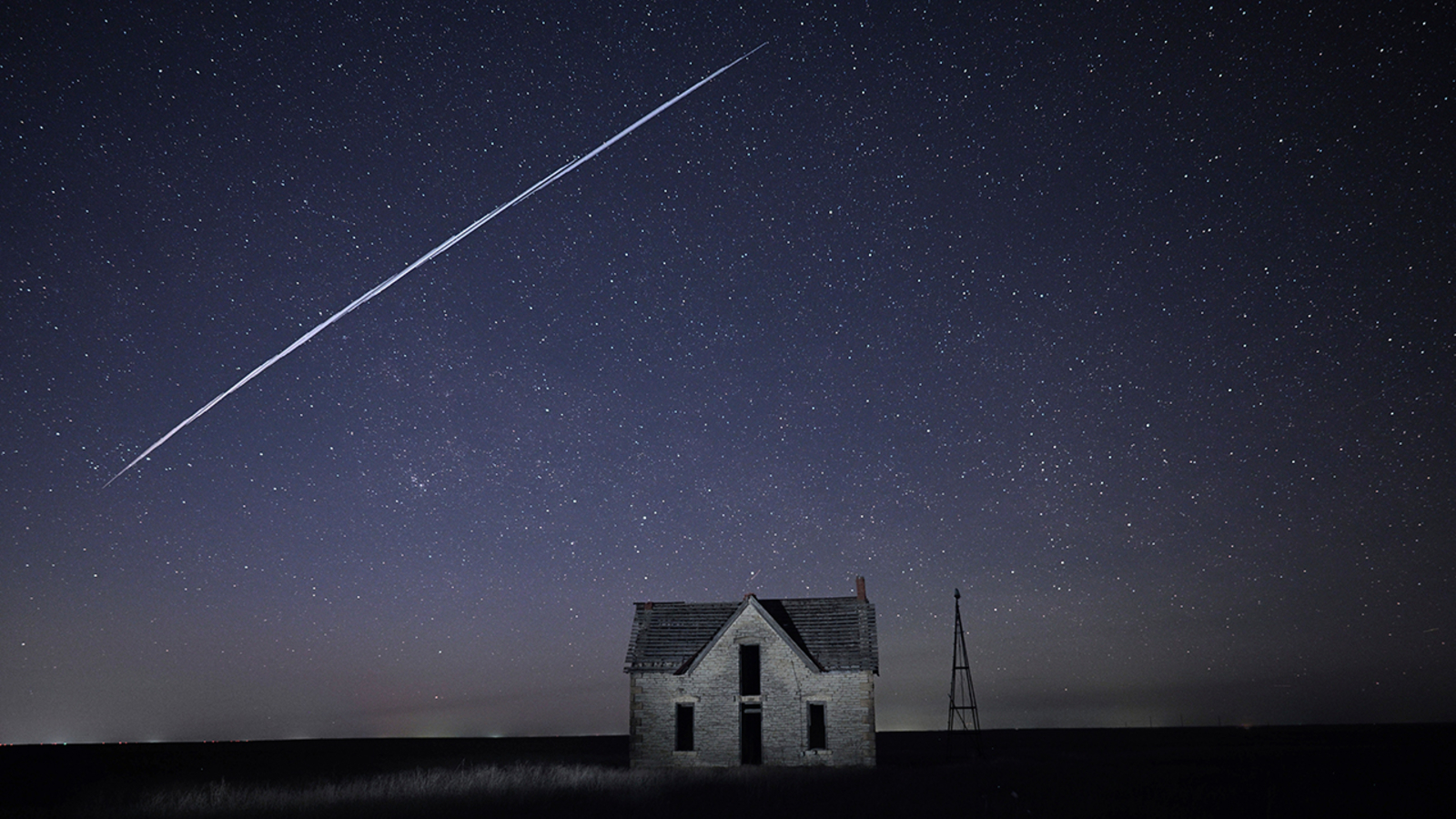 Callers swamped TV stations from Texas to Wisconsin reporting the lights and musing about UFOs.

That seems to me the most probable explanation right now… If they’re alien UFOs, it would be an invasion -something that I think someone would mention were it to occur. This was in Wisconsin, BTW, seen from the Wisconsin River a little upstream from the Lone Rock (AKA Otter Creek) landing.
Thanks.

Upon awakening this morning and looking at the film clip that went with the ABC7 news article (read the article last night but didn’t look at the clip - I was a bit bushed after unloading/unpacking after the outing), though - that wasn’t what I saw. It was more like a parade of lights covering the whole sky, coming from the western horizon and moving to the eastern with each light moving at a pretty decent clip. Not a line of closely spaced lights as shown in the clip. Could we have been seeing the deployment? Or maybe it has a different appearance from different locations? Whatever it is, it appears darned unnatural. So it looks like this is going to be a permanent feature of the night sky from now on? You’d think one would need a permit or something to do that.

Possibility of residual effects of imbibing varied chemicals at Grateful Dead concerts during
your sojourns in “hippiedom” during the 60s ???

But Linty saw it, too… and she never went to a Grateful Dead concert (her loss IMHO). Even if she had, synchronized flashbacks after forty years is “not a thing” as far as I know. But those days did open my mind to the possibilities - there are billions of galaxies each with billions of stars, and a multiple number of planets for many of those stars. There is little doubt in my mind that the there is the possibility of an Elon Musk actually existing… “shall we go, you and I while we can, through the transitive nightfall of diamonds?”
Go on out tonight - you might see it too.

Get Paris on the case.
After he sniffed out those Big Feet, they froze in their tracks.
https://forums.paddling.com/t/ran-into-darrell-and-his-brother-darryl/

sorry, I know this isn’t a joke:

The director of national intelligence is expected to unveil an unclassified report next month on everything government agencies know about UFOs, including scores of unusual sightings by military pilots.

My wife and I saw this as well, also in Wisconsin. I watched from beginning to end, and there had to be 200-300 lights and they were just as you described. Flying in a single file line, usually about 2-3 evenly spaced and a larger gap before the next pod flew through. It was the strangest thing I’ve ever seen. After the lights stopped, we did some research and the conclusion we came up with was the SpaceX satellites as well.

these are almost undoubtedly Starlink satellites. They begin close together then begin to spread out.

If you’re seeing ‘trains’ of lights move across the sky, its almost surely Starlink. Astronomers are pissed, they’re ruining their telescope shots.

I saw them a couple weeks ago while out camping as well.

sorry, I know this isn’t a joke:

No I guess not… which is a shame. Laughter is good. There’s been some outstanding humor built around UFO debates and its been around for many decades. Here’s one: Set the Wayback machine for 1977, spoofs on public access television, talk shows… go to 11:36 or just before for the alien debate.

Mystery. I did get to feel an earthquake in Maryland about a month ago. Felt like somebody dropped a dumpster, one loud crack. This as close as I got to an anomalies. I was in the water the day one hit DC.

I’ve seen them too, was pretty sure it was Elon Musk’s project, my son used to work for him, and he was unimpressed. Also in February of 2019 we were at our farm in a remote region of Northern Utah and we saw parades of drones in the night sky at first I thought they were at very high altitude, but as we were watching three or four broke from the pack and hovered over us. They were low enough we could hear the rotors/motors. Scared the s__t out of me. We thought maybe they were from the local university or law enforcement, but looking into them we never got an answer to who was flying them.

Strange days we’re going through, SeaDart. It’s strange when I went out last week and saw nothing jarringly unnatural in the night sky and felt grateful for that… though the sunset was through the smoke from Canadian forest fires (air quality advisory in effect from that) and during the day contrails were still almost completely absent, I suppose because Covid is keeping folks from flying as much.

If you want the truth and the facts, the mainstream media and our Government are the LAST places to look!. They do not want you to be informed. Get on alternative news sites, avoid youtube, google, facebook (they are all censoring everything). Try the site bitchute, brighteon, ugetube to see banned video’s of all kinds (including about the covid “jabs”) peace.

In other words you don’t know what the lights were…

I was not there. They could have been spaceships. But, I believe 1000% that there are many ET’s living on thousands of planets, and that they have been visiting earth for millions of years. They visit us regularly and also have underground bases in earth and in the oceans. Look at cop circles and see the intelligent messages they are sharing. This information is being suppressed by our Government and many others.
I also believe that early humans advanced because ET species mated with human women and made us much more intelligent. The series on the History channel, Ancient Aliens (now in its’ 16th year) has a lot to reveal.

I don’t doubt the likelihood of life other than on Earth. But to the rest of it… sure.

The truth is out there (I mean WAY out there), Mulder!

Used to be I could sit out in my foil,
hat of tin,
avoid the boil,
of extraterrestrial telepathy,
wavin’ up-and-down,
for any sense in me.

Maannnn, I wish John Prine was still alive! maybe he could help me write a tune for this.

Oh, well. When I get to heaven. Might try a vodka and ginger ale, too.

ET? Nope I ain’t buying none of that “snake oil”.

The people making UFO videos for utube/etc, making tv specials, writing books, speakers at alien concerences where they sell their books, and appearing on talk shows are the promoters of the vast majority of that BS.
Latter day snake oil salesm2n; making $$$$$ off the dreamers, lemmings, and the gullible.
The same can be said about bigfoot, alien abductions, Area 51s UFOs, and captured aliens.
Also include the Loch Ness monster, megaladon sharks, vampires, and werewolves, prehistoric animals in the Amazon, men in black, 50 foot alligators and anacondas etc.
All BS for the bucks…
Must pay pretty well; there sure are a lot of snake oil salesmen…
Type ufo in on utube and see how much BS pops up.
Lots!!!