Strap or something to help get me out!

I am a recreational paddler and love it. My problem is, I recently had my knee replaced (and my other knee isn’t great) and I have trouble getting OUT of my kayak. I get in just fine but eventually I want out! Last year? I saw an ad for some sort of strap that you can attach to your kayak to help with this sort of situation but don’t remember who offered them. Anyone know of this or can offer any suggestions, I would love the help and advice!

I have never heard of the strap, but.
I have had a knee replacement, and prior to it when I couldn’t bend it. My method for getting in and out was: (my left knee was the bad one)

This is a Stand Assist Strap for a fishing SOT but I’m sure it could be adapted to just about anything.

Device here… but
I suspect that your better course is to do whatever is necessary to get that knee working better. Whatever functionality you leave on the table during recovery will be a problem for the rest of your life.

But if you really want to go the device route and can figure out how to get this installed, this may be what you saw. I have some problems with it personally but it is responsive to your question.

I have similar knee
problems, but not as bad as yours. That’s the main reason I shifted to paddling SOT’s because they’re easier to get in and out of.

I saw that add
And on a paddle shortly after there were about 10 kayaks trying to land on a muddy bar about 18 inches wide 8 ft long. I couldn’t get out the normal way so I grabbed my painter and pulled on it while standing up in the cockpit. It let’s you stand without having to get your feet underneath you. You just lean back and start walking backwards. Not sure how much help that would be for a bad knee. I had a poly boat with a rope tied around the bow carry handle.

Try this.
Are you able to pull one leg at a time out of the cockpit on one side of the boat? That is to say, is your cockpit large enough to allow this? If so, while you are still in about one foot, or so of depth–both legs dangling out the same side of the boat, just lean forward as if you are purposely trying to put the boat on edge and stand up. The boat might tip pretty far, but it shouldn’t flip. You should also be able to use the reverse of this to easily get into your boat, but it might take some practice.

My brother-in-law has had both hips replaced and he’s kind of stiff, but he is able to use this method for ingress and egress with no problem.

Leaning back v forward to get out

Just one dumb thing - I have seen many more women than men have trouble getting out of a rec boat by leaning back then putting their weight on their arms to push up.

It is a combination of two things specific to women. One is that we tend to be shorter, allover and in torso and arms, so the width and depth of the hole that needs to be climbed out of in a rec boat makes it a harder task physically. More men would have the same issue if we were all the same size.

The second issue is that women carry proportionately more weight lower down than men, and often have poorer upper body tone. Women shouldn't ignore the trapezoid muscles in workouts, but it happens.

All of this means that women often need to lean forward rather than back, just to get the weight up out of the seat. Obviously a knee that won't bend makes this more challenging unless you can find really perfect landing spots like flat sandy beaches or boat launch ramps where you can just fall out of your boat sideways. It's a wet sport anyway.

One option to pull up might be to seek out docks that give you bollards, or ladders or tie downs for motor boats that you can grab and pull yourself up with. You'll have to throw your body over the dock to avoid a surprise swim, and it'd be good to make sure you have a rope or something tied to the boat so it can't get away. But it would serve the same purpose as the device I mentioned.

painter line
Attach a stout line (rope) to the bow of the kayak and bring the other end back to the cockpit securing it beneath the bungee closest to the cockpit. When you want to exit, release the line from the bungee, put out your better leg into knee deep water, then while pulling on the line with one hand and the other on the cockpit rim, proceed to stand up. The boat will tend to move a bit rearward but can be held mostly in place with the hand that is on the coaming of the cockpit. This works well for me after a long paddle. One of the tricks is to get your leg out and down on the ground close to knee deep because you don’t have to stand from such a low squat position (easier on the knee joints). Best wishes.

Switch To An Outrigger
Where you sit much higher and can easily get out. And have no trouble transporting and car toping these 18 pound canoes.

getting out …
…I can only assume you have a sit-in boat …have you tried putting your hands either side of the cockpit coaming and gently lifting yer self up and sliding onto the back rim of the cockpit …then slowly draw your legs out and straddle the cockpit to keep your balance …then swing a leg over to either side to dismount ?? Also assuming the water is shallow enough to do this.

I carry a walking stick to help me
get up and I paddle a SOT.

Physical therapy, and maybe a SOT
Regardless of paddling intentions, I agree with celia that you still need to improve the strength of your knees. If you haven’t been doing exercises for it, some physical therapy might help you get a good start on building them back up.

Either way, if you’re not paddling a SOT now, it might be worth considering buying a used one in the meantime, just so you can paddle without worrying about being able to get out.

did anything we wrote help?
Just curious to hear if anything we all had to say, usually from our experiences, was of any benefit to you? This would help us help others. Maybe you have not had an opportunity to research or try the suggestions because the lake is still frozen or you are busy trying to sign up for Obama Care…

I have been doing exercises to strengthen my leg which has helped some. I kinda wanted to look at the strap thing before I bought it but there are few kayak supply places near me, I finally found them online. I. Going next week to rent a sit on before buying one to see if I like it first. Any reccomendations on a decent middle price range one?

I’ve had both knees replaced, and as they work exceptionally well for most things, getting in and out of the kayak isn’t always easy. On my poly recreational boat I put a handle in front of the combing that worked for raising and lowering myself into and out of the kayak. The downside is that I had to drill holes.

Now I have a thermoformed boat. I tried tying a rope around the bow, but between rope stretch, and roll it was precarious. I have a few other ideas to try. One is to put a strap through a short piece of plastic pipe like the device people use to tie down the bow and stern on their cars. Then I would place it inside the day hatch, replace the hatch cover and pull myself up, or down. The other is to use a long nylon strap around the bow and through the deck lines with a handle to pull on. I don’t want to damage my new boat, but rolling over at every launch or landing isn’t acceptable either.

@redmond said:
I have similar knee
problems, but not as bad as yours. That’s the main reason I shifted to paddling SOT’s because they’re easier to get in and out of.

Same reason I paddle SOT. I paddle a Pungo sometimes and I either have someone stabilize it to get out, or in warm weather, just roll out. 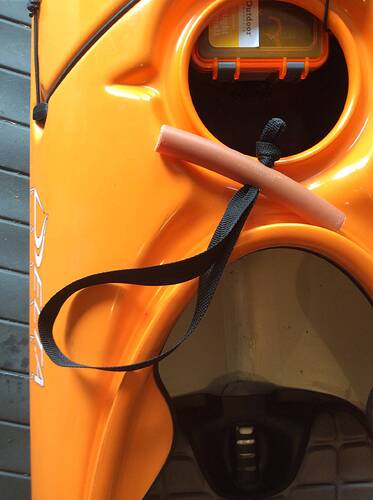 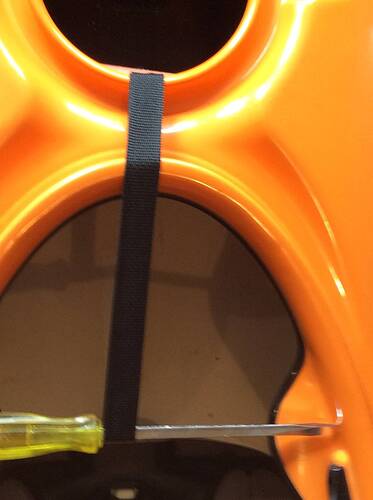 Had a brain storm for using to lift from my seat. I had a piece of hard plastic pipe that I cut to fit in my day pod, I drilled a hole large enough to to snake both ends of a nylon strap through, and then tied a knot and melted the loose nylon fibers.

My other ideas were to mount a handle like I did in my poly-rotomolded boat, but I didn’t want holes. The other idea was to tie a rope around the bow, but the rope stretched and twisted just enough to cause balance proplems.