Surfing Through Fog, Mist and Rain

Another disturbance and another chance to go out and play. My second surf session with the Sterling Progression kayak: 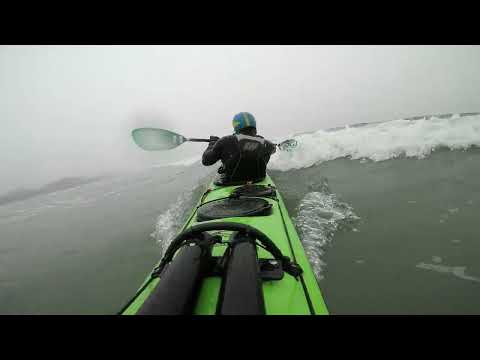 The next day saw even better conditions — sunshine, slight offshore (clean-up) wind, 3’ plus glassy waves in the 10-11 second range. Gorgeous!

My surfing performance… Not so much. Huge room for improvement. 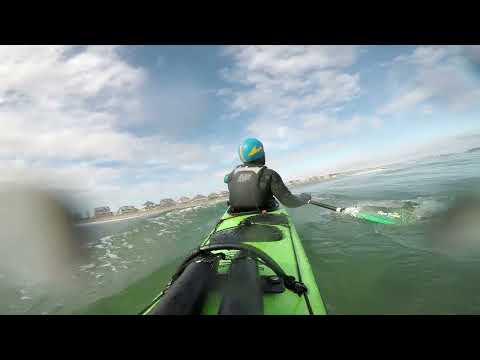 It’s pretty ridiculous… I really don’t know if it’s me or the boat that is backsurfing. Only thing I am sure of is that I am ruddering and bracing to stay upright.

The Progession is foremost a surfing longboat and the best I have ever experienced under my seat.

I was out Saturday, Sunday, and last night surfing a Nigel Foster Whisky 16. Saturday had the consistently bigger waves - 3’ pretty consistent with a little bigger sets mixed in, but it was windy with waves mixed in with swells, so tougher to try to make calculated moves. Last night was small smooth swells, more 2’ with occasional 3’ mixed in. I thought I would share something that I had success with last night, and it made me think of your being spun into back surfs.
So I typically try to edge my kayak and try to steer a bit to the left followed by a bit to the right and so on and so forth, and it slows the kayak and keeps it a bit higher up on the wave. All stuff I’m sure you play with as well. Then when a wave approaches breaking, gets steep, I either have to get it quite perpendicular to the wave for that moment so that I can continue forward and maintain steering control through the break, or I’ll broach, and possibly end up in a bongo slide, which I consider a momentary loss of control until I can regain meaningful steering control in some way. Then there’s always the option of turning and then peeling off of the wave just before it breaks, which I use frequently just prior to a break right before the shoreline, when there is really no further wave riding. I would just be left up on the sand.
So yesterday evening I was turning as I would if I was going to peel off of the wave out further where a wave was first breaking, without any intention of peeling off. I would watch for the wave to get steep, and try to agressively steer my bow up the wave so the bow would hit the breaking water first. And make sure I’ve released that steering force when the wave would hit the bow. When that push hits my bow first, it spins the bow down wave, and I could get it to spin 90 degrees, and sometimes beyond, so that there was no bongo ride, and the wave didn’t slip under me - not every time at least. So effectively, trying to manage a sea kayak top turn so that I end up bow first, forward surfing. It’s definitely an exercise in timing, but maybe you could play with it to see if you can turn some back surfs into forward surfs. Get the wave to make your bow spin downwave instead of your stern, and do it through a fun, albeit sloppy compared to a waveski, top turn. Just some thoughts. I’m not proposing this as some expert explaining how to do things “right”. I don’t know how it will work in your kayak. I just see a weeble - looking profile that will probably spin like a top. So if the stern gets pushed, the stern spins around. If the bow gets pushed… If I can get it to work for me some in the Whisky, you may be able to get that out of the Progression. It is a fun move.

Yeah, definitely something to play around with. Looking like some waves for me this Friday. 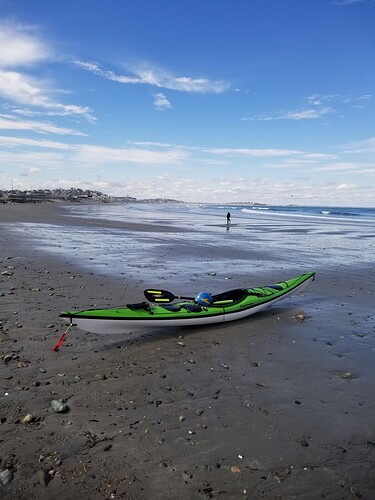 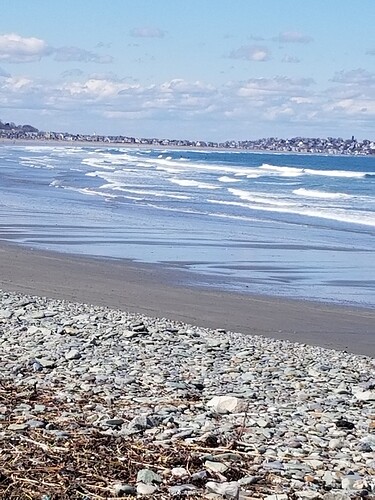 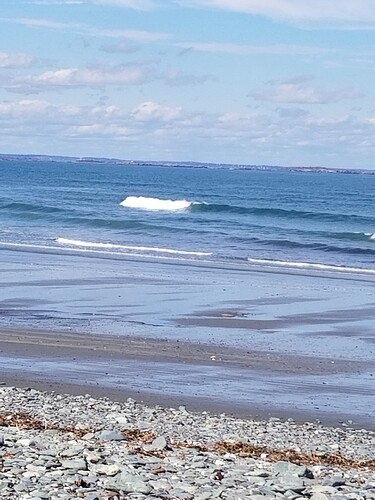 It was great for about 40 minutes. Then “Ranger Rick” from Dept of Conservation and Recreation came by to kick me off the “public beach”, saying kayaks aren’t allowed. After the first incident, I checked DCR regs and found no such prohibition. But, i wasn’t going to get in to it because i would be on the losing side.

Guess i’ll have to stick to waveskiing at this break. We’ll see if Ranger Rick is ok with that.

It was good longboat surfing while it lasted.