Thank you Willow and Rookie!

Anyone paddle today? I’ve been dog sitting our son’s two and ours. My wife has been parent sitting her 95 yo mother who had a minor bump up last night.

Alas, off the water today as it was a day to visit family. That involves about three hours of driving, round trip.

As it’s a summer weekend, loads of downstaters are up here filling the beaches or zooming around in their power toys. No loss not to paddle today…even here at home.

As it’s a summer weekend, loads of downstaters are up

When I lived in the mountains we called them flatlanders…

When I lived in FL it was snow birds.

Snowbirds used to be a winter thing, last year changed that. I think their are now lockdown birds.

Paddled yesterday, trying to make the fast boat muscle memory again. I need a lot of work; sadly out of shape.

Lots of fudge shops on Mackinac Island as well as in towns in the tip of the mitt. They’re patronized by the tourists, so in the summer we call them fudgies.

I was thinking of going paddling today . Would have been simple since I had left my gear and the Feathercraft Wisper set up inside the camper after I got back from the trip to kayak with Celia in Maine (and stopping in the 'Dacks to hit Tupper Lake with my brother on the way home). But they predicted thunderstorms so I didn’t go – rain never showed up, as it turned out. Oh well, Monday is the same as Sunday to us retirees. And Lake Arthur will be less crowded on a weekday.

Speaking of monikers for the tourist mobs, I grew up on the outskirts of Boston, Mass, and back then the locals called the out of state hordes who crowded Cape Cod and the other coastal commercial spots “taffy heads” or “taffy snappers”. Salt water taffy (horrid stuff) is to the Mass coast what fudge is to the Western Michigan resorts. We spent our childhood and teen summers on Lake Michigan, with grandparents and cousins who lived from Muskegon up to Pentwater, so I knew about “fudgies.”

After whacking few skin tags on my body under my arms I’m dockside. Monday is test day after two day healing.

In New Hampshire they call them “Massholes” (I know, not very nice!), and in the Hudson River Valley, they’re the “cidiots.” Not much nicer!

Here in the South they use “Bless Your Heart” as a two edge sword. One way is to show concern, and the other is as a cut. Then there is the “Y” word which is often preceded by the “D” word. I suspect locals everywhere use code words for there distaste of outsiders, but then at the same time are wonderfully hospitable for the most part. People a paradigm of paradoxes.

On Lake Erie we got a lot of folks from Pittsburgh we call them “Mup Ears” as when you ask them where they are from they say we are mup ear from Pittsburgh.

In the DC area they are sometimes called “tourons”.

That’s what locals at rock climbing areas call tourists, too. It’s my favorite.

I’ve lived in Pittsburgh most of my adult life and have really never heard any pejoratives about tourists. I’ve concluded that is because most of the out-of-towners who venture here are indistinguishable from us “y’inzer” locals: sloppily dressed, overly talkative, bumpkin-like, constantly agog at our surroundings and aggressively friendly.

Any time you are MupEar you are more than welcome to paddle the lake or PI bay.

You wanted to know if anybody paddled…

It is now Monday…yesterday we dropped the boats on Lake Barkley in TN. We left out camp site and went to a boondocking…err…back country site to launch the boats. We went early for the cooler weather.

We paddled an exploratory hour up river…note Lake Barkley is a BIG river. It is part of Land Between the Lakes. We paddled into the various bays. …likely disturbing some fishermen. At an hour we stopped at the end of the bay for a swim. Water was cool. We returned to the launch , removed extra gear and did some assisted rescues. The kids swimming were entertained. Did about 6 miles.

The day before we were in Nickajack Lake,TN. For decades we’ve passed by on I-24 seeing that county campground on Nickajack and said wed would go there …so we did. Water was warm. Lake has a lot of hydrilla. Cleaned boats up. Saw osprey, comerants, canada geese, and one eagle. We paddled about 6 miles. Six miles in the 90s is plenty for this old guy. 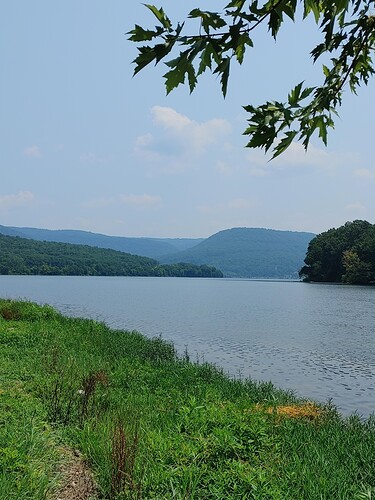 Paddled yesterday and today too. Yesterday there were more people on the river but they are locals, not tourists. Today I had the river to myself until I ran into a neighbor in a kayak. Around here we have a special name for tourists from the Chicago area. 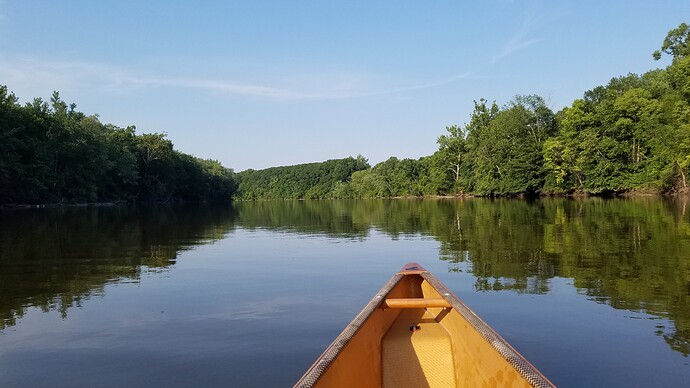 Sunday was play day at the local lake - rescues - assisted & otherwise. A little bit of towing to keep the shoulders lubricated. A nice breeze and a fair amount of power boat traffic to add a bit of conditions. A bit as expected, the wider, deeper kayaks are rather more difficult to manage a re-entry. Tonight (Monday) I was back at the lake for the Monday night paddle. Mid-80s to start so a good night to start out wet.